Negative lymph node (NLN) count has been recognized as a prognostic indicator in various cancers. However, the relationship between NLN count and the prognosis of cervical cancer is still unknown. In this study, 10, 500 cervical cancer patients after radical surgery were selected from Epidemiology and End Results Program (SEER) data. Clinicopathological characteristics were collected for analysis, including year of diagnosis, age, race, grade, primary site, FIGO stage and cause specific survival (CSS). Univariate and multivariate Cox proportional hazards model was used to assess risk factors for survival of patients. X-tile plots identified 6 as the optimal cutoff value of NLN count to divide patients into high and low risk subsets in terms of CSS (χ2 = 183.95, P < 0.001). The rate of 5-year CCS of cervical cancer patients was improved with an increase in NLN count from 0 to 23 (all P < 0.001). NLN count was validated as an independently prognostic factor by the multivariate Cox analysis (HR: 1.571, 95% CI: 1.370~1.801, P < 0.001). Subgroup analysis showed that NLN count was a prognosis factor in FIGO stage I (χ2=35.023, P < 0.001), stage II (χ2 = 12.910, P < 0.001), stage III + IV (χ2 = 9.732, P = 0.002) and unknown stage (χ2 = 16.654, P < 0.001). Conclusively, this study demonstrated the NLN count was an independent prognostic factor for cervical cancer patients.

Cervical cancer is the fourth most common female malignancy worldwide [1–4]. For women with early-stage disease, radical hysterectomy and pelvic lymphadenectomy are the standard treatments and regional lymph node dissection is important to the survival outcome. Despite the lymph node status does not affect the staging of cervical cancer in the current International Federation of Gynecology and Obstetrics (FIGO) staging system [5], recent studies have revealed that the lymph node status such as lymph node ratio have prognostic value for survival of patients with cervical cancer [6–11]. The node-positive cervical cancer is heterogeneous and the prognosis of these patients cannot be stratified by the definite node-stage. The concept of negative lymph node (NLN) counts has attracted attention recently. NLN count can serve as a prognostic indicator in various cancers, such as colon [12], breast [13], esophagus [14] and gastric [15]. However, the correlation between NLN count and patient prognosis in cervical cancer is not fully studied. This retrospective study investigated the relationship between NLN counts and survival of cervical cancer patients who received radical surgery. We used Surveillance Epidemiology and End Results (SEER) database to investigate this association, and determine the optimal cutoff value of NLN counts.

The demographic and tumor characteristics of patients were summarized in Table 1. A total of 31.15% (3, 271/10, 500) patients received postoperative radiotherapy. The NLN number was correlated with the year of diagnosis, age, race, grade, histologic type, FIGO stage and radiation after surgery (all P < 0.05).

The optimal cutoff points for NLNs determined by X-tile program

We analyzed the prognostic outcome utilizing various NLN count ranging from 0 to 23 to assess the impact of different NLN count on CSS. The 5-year CSS was calculated for patients with NLNs number or more nodes and less than NLN nodes. Table 2 demonstrated that NLN count was a prognosis factor (all P < 0.001). The 5-year CSS rate increased from 40.8% to 91.4%.

Table 2: Univariate analysis of the influence of different NLN count on CSS in patients with cervical cancer

As shown in Figure 1, X-tile plots were constructed and the maximum χ2 log-rank value of 182.842 (6 as the NLN count, P < 0.001) was produced, applying 6 as the optimal cutoff value to divide the patients into high and low risk subsets in terms of CSS. Compared to patients with NLN count ≤6, patients with NLN count >6 showed a significant improvement in 3 and 5-year CSS of 11.30% and 12.60%, respectively (Table 3). 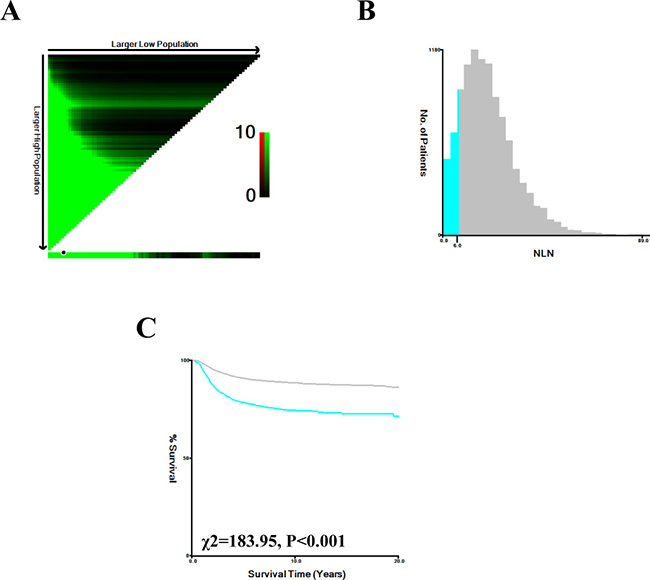 Figure 1: X-tile analysis of survival data from the SEER registry. X-tile analysis was performed using patient data, equally divided into training and validation sets, from the SEER registry. X-tile plots of the training sets are shown in the left panels, with plots of matched validation sets shown in the smaller inset. The optimal cut-point highlighted by the black circle in the left panels is shown on a histogram of the entire cohort (middle panels), and a Kaplan-Meier plot (right panels). P values were determined using the cutoff point defined in the training set and applying it to the validation set. (The optimal cutoff value for NLN count is 6, χ2 = 183.95, P < 0.001).

Impact of the NLN count on CSS in different FIGO stages 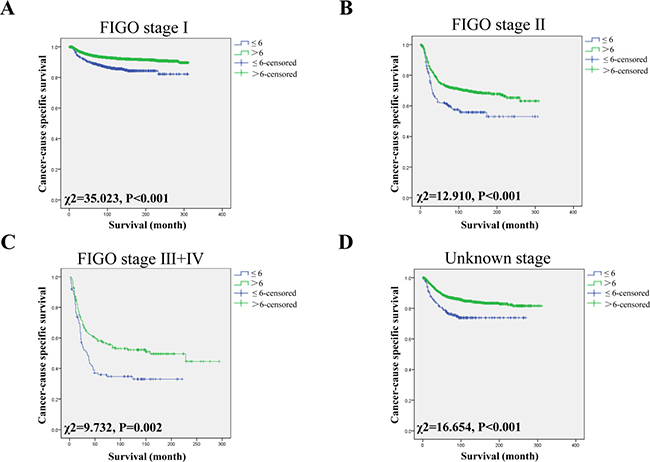 Table 4: Univariate and multivariate analysis of NLN status on CSS of cervical cancer based on different cancer stage

P-values refer to comparisons between two groups and were adjusted for age, race, grade, histologic type, FIGO stage and radiation after surgery as covariates.

Despite the current UICC/AJCC (Union for International Cancer Control /American Joint Committee on Cancer) and FIGO staging system do not consider the status of lymph nodes in cervical cancer, various studies have confirmed that it plays an important role in prognostic survival of patients [16–19]. Zhou et al. concluded that positive LN counts had prognostic value in lymph node positive stage I-II of cervical cancer [6]. However, the lymph node ratio and the number of positive lymph node were affected by many factors such as the number of lymph node retrieved and inspected, and neoadjuvant therapy. If the LN retrieved was not enough, the prediction of survival would be inaccurate. It has been reported that the NLN count was an independent prognosis factor in colon [20, 21], gastric [22], esophageal [14] and so on. Although Chen et al. [11] confirmed that the combination of NLNs count and the ratio of positive and removed lymph nodes could better predict the postoperative survival in patients with cervical cancer, the association between NLN counts and survival was not fully explored. In this study, we found that the rate of 5-year CCS of cervical cancer patients was improved with the increase of NLN count from 0 to 23 (all P < 0.001), and identified the optimal cutoff value for NLN count as 6. Furthermore, the NLN count was an independent prognosis factor for patients with cervical cancer of each FIGO stage. Apparently, NLN count is a good supplement for evaluation prognosis of FIGO stage.

The relationship between lymph node count and outcome was controversial in the treatment of cervical cancer. Because the majority of patients with early stage cervical cancer do not have lymph node metastases. The extensive lymphadenectomy was unnecessary and could cause complications such as lymphedema [25]. Pieterse et al. [28] concluded that more lymph nodes retrieved is related to longer survivals of patients with positive nodes. Similar results were found in the studies of Shah et al. [19] and Lim et al. [24], which concluded that early-stage cervical cancer patients who underwent a more extensive lymphadenectomy had longer survivals. In contrast, Ditto et al. [17] revealed that the number of lymph nodes had no effect on survival. The node-positive patients with cervical cancer are heterogeneous and the prognosis of these patients cannot be stratified by the definite node-stage. Thus, the concept of NLN count may serve as a prognostic indicator in various cancers.

This study has several limitations. Firstly, different operative approaches, doctors and even pathologist would affect lymph nodes harvest, which cannot be adjusted in analysis. Secondly, the SEER database does not have the information of subsequent therapy including adjuvant chemotherapy, radiotherapy and targeted therapy, co-morbidities and recurrence, which may also impact patients’ survival outcome. Thirdly, the SEER database lacks detailed description of preoperative clinical grading and response to treatment. Despite these potential limitations, this study demonstrated that the NLN count was an independent prognostic predictor for patients with cervical cancer. And 6 was identified as the optimal cutoff value of NLN count to divide patients into high and low risk subsets in terms of CSS. NLNs count could be a good supplement for evaluating prognosis of UICC/AJCC and FIGO stage of cervical cancer.

The SEER database and SEER-stat software (SEER*Stat 8.3.2) were used to search cervical cancer with M0 after radical surgery between 2004 and 2012 with a known age (≥18). Years of diagnosis, age, race, grade, primary site, FIGO stage and CSS were extracted from the SEER database. Histological types were limited to squamous cell carcinoma (8070/3), adenocarcinoma (8140/3) and mucinous adenocarcinoma (8141/3, 8142/3). Survival time was calculated from the date of diagnosis to the date of cancer-specific death. The exclusion criterions included: age<18, receiving neoadjuvant therapy, no evaluation of histological type, multiple malignant neoplasms, died within 30 days or information on CSS and survival months unavailable.

The NLNs cutoff points were determined using the X-tile program (http://www.tissuearray.org/rimmlab/), which identified the cutoff value with the minimum P values from log-rank χ2 statistics for the categorical NLNs in terms of CSS.

The X-tile plot illustrates the presence of substantial tumor subpopulations and shows the robustness of the relationship between a biomarker and outcome by construction of a two dimensional projection of every possible subpopulation [29]. In our data, the variables, negative lymph node count and cancer specific survival were used. X-tile plots provide a single, global assessment of every possible way of dividing a population into low/high or low/medium/high level marker expressions. X-tile data are presented in a right grid where each point represents a different cut-point. The intensity of the color of each cutoff point represents the strength of the association. The X-tile software allows the user to move a cursor across the grid and provides an “on-the-fly” histogram of the resulting population subsets along with an associated Kaplan-Meier curve [30]. Baseline characteristics were compared using the χ2 test for nominal variables. Survival curves were generated using Kaplan-Meier analyses, and the differences between the curves were analyzed by log-rank test. Cox regression models were built for analysis of risk factors for survival outcomes. Statistical analyses were performed using the statistical software package SPSS for Windows, version 19.0 (SPSS Inc., Chicago, IL). All P values were two-sided. P < 0.05 was considered statistically significant.

XL and ZH conceived and designed the study, HW and XL performed the analyses, HL, HY and RG provided assistance in writing the manuscript and support in interpreting results. All authors discussed the results and implications of the analysis and commented on the manuscript at all stages.

This work was supported by grant from National Youth Science Foundation (81402002). The authors acknowledged the efforts of the SEER Program tumor registries in the creation of the SEER database. The interpretation and reporting of these data were the sole responsibility of the authors.