It was recently reported that approximately 1.7 million new cancer cases and 600 thousand cancer deaths are projected to occur in the U.S. in 2017 [1]. However, the five-year survival rate of most cancers remains still low, and many scientists are looking for new biomarkers useful for diagnosis or determining prognosis in cancer.

Long noncoding RNA (lncRNA) is defined as transcribed RNA molecules greater than 200 nucleotides in length that is lack a meaningful open reading frame [2]. LncRNA has many important functions in disease, including epigenetic regulation, transcriptional and posttranscriptional regulation [3]. Moreover, it now appears that lncRNA dysregulation may be involved in various types of cancer [4–7]. For example, some lncRNAs play a key role in cancer cell proliferation, invasion and metastasis [8, 9], suggesting lncRNA may be a useful marker of cancer prognosis [10].

Actin filament-associated protein 1 antisense RNA 1 (AFAP1-AS1) is a lncRNA originally detected in esophageal adenocarcinoma [11]. It is derived from the antisense DNA strand in the AFAP1 gene locus, which regulates actin flament integrity, and acts as an adaptor protein that links Src family members and other signaling proteins associated with actin flaments [11, 12]. In addition, AFAP1-AS1 is reportedly associated with various tumor biological parameters [13–15], including overall survival (OS), lymph node metastasis and tumor stage. But although AFAP1-AS1 expression may affect prognosis and metastasis of human cancers, most studies reported so far are limited by discrete outcomes and sample size. We therefore performed this update meta-analysis to determine the prognostic value of AFAP1-AS1 in cancer patients.

The detailed screening process is shown in detail in Figure 1. According to the inclusion and exclusion criteria, sixteen studies and 1,386 patients were included in the meta-analysis [16–31]. Additionally, the characteristics of the 16 studies included in the present meta-analysis are summarized in Table 1. The subject number of 16 studies ranged from 36 to 162, with a mean sample size of 86.6. All studies were conducted in China and were published between 2015 and 2017. Among the sixteen studies, two focused on pancreatic ductal adenocarcinoma [17, 28], two focused on colorectal cancer [18, 25], two focused on hepatocellular carcinoma [19, 29], two focused on esophageal squamous cell carcinoma [21, 30], and one each on non-small cell lung cancer [16], cholangiocarcinoma [20], gallbladder cancer [22], gastric cancer [23], nasopharyngeal carcinoma [24], ovarian cancer [26], triple-negative breast cancer [27], lung adenocarcinoma [31]. All of the clinicopathological parameters were all dependent on the pathology. The reference gene of AFAP1-AS1 in these studies were found to be inconsistent, including GAPDH [17–27, 29–31], RNU48 [16] and β-actin [28]. 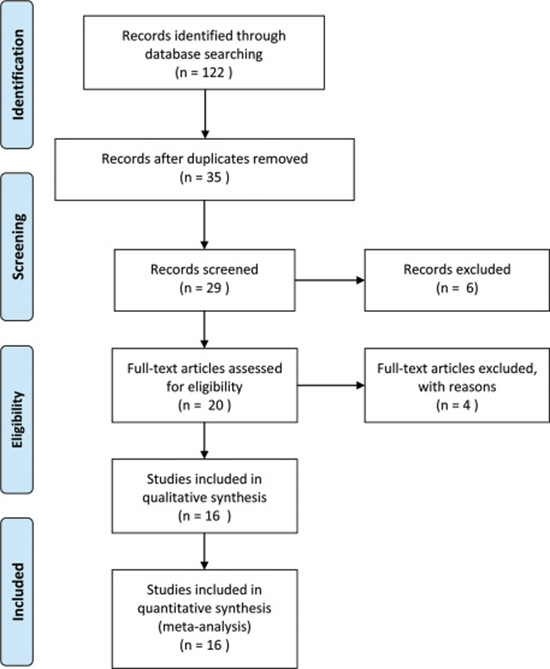 Figure 1: Flowchart presented the steps of study selection in this meta-analysis.

Table 1: The basic information and data of all included studies in the meta-analysis

Note: The dashes represent no data.

Association between the AFAP1-AS1 expression level and survival

We performed a cumulative meta-analysis to assess the function of AFAP1-AS1 for overall survival (OS) in patients with cancer. Additionally, twelve included studies with 1,048 patients reported the relationship between OS and AFAP1-AS1. The fix effects model was used for insignificant heterogeneity (I2 = 35.9%, PQ = 0.103). A significant association was observed between AFAP1-AS1 and OS in cancer patients (pooled HR = 1.98, 95% CI: 1.71–2.28; Figure 2). 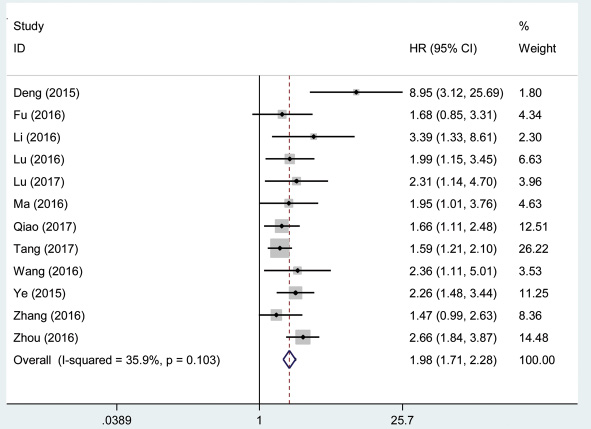 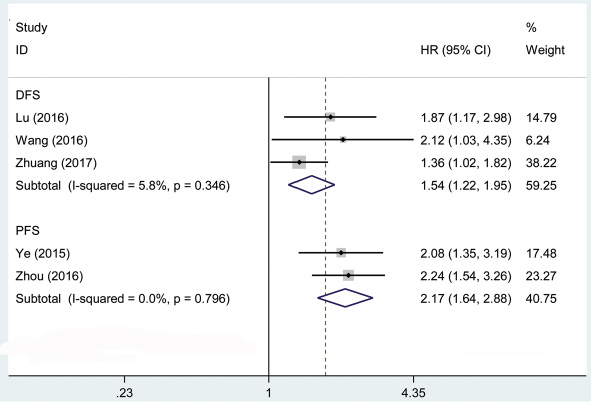 This result demonstrated that a high expression of AFAP1-AS1 might be correlated with a shorter OS, DFS and PFS in cancer patients. Thus, we found that AFAP1-AS1 was an independent factor of survival among patients with cancer.

Association between the AFAP1-AS1 expression level and tumor size 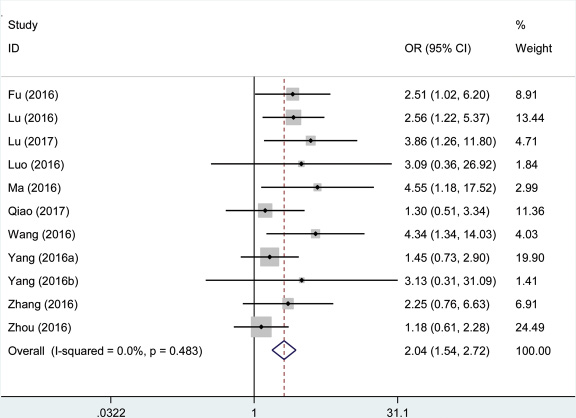 Association between the AFAP1-AS1 expression level and tumor stage

One thousand two hundred and fifty-four patients in fourteen eligible studies were included to detect the relationship between the AFAP1-AS1 expression levels and tumor stage in this meta-analysis. The random effects model was used for significant heterogeneity (I2 = 41.0%, PQ = 0.055). A significant connection was found between a high AFAP1-AS1 expression level and high tumor stage in cancer patients (pooled OR = 2.35, 95% CI: 1.70–3.26, Figure 5). In a sensitivity analysis of all included studies, heterogeneity disappeared after the Ye, et al. study [28] and Zhang et al. study [29] were excluded (I2 = 0%, P = 0.53). 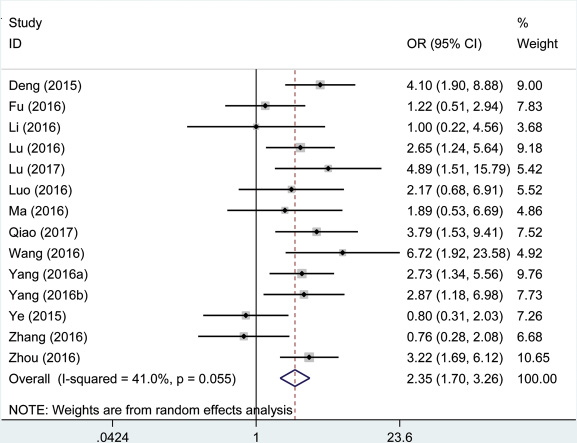 Association between the AFAP1-AS1 expression level and histological grade

A total of 719 patients with cancer from eight eligible studies were collected and analyzed. The fix effects model was used for limited heterogeneity (I2 = 14.6%, PQ = 0.316). The odds ratio (OR), expressed as high AFAP1-AS1 expression group versus low AFAP1-AS1 expression group, was 1.39 (95% CI: 1.02–1.90, Figure 6). According to the result, there was a significant difference in the poor differentiation grade incidence between the two groups. And the results demonstrated that high expression of AFAP1-AS1 significantly predicted more prone to poor differentiation grade for patients with cancer. 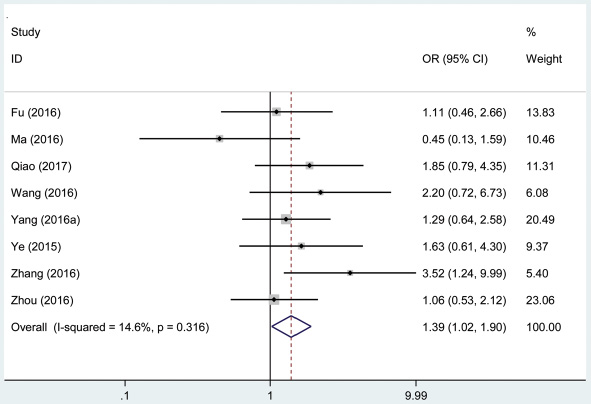 Association between the AFAP1-AS1 expression level and lymph node metastasis

A total of 682 patients with cancer from seven eligible studies were collected and analyzed. The fix effects model was used for insignificant heterogeneity (I2 = 1.5%, PQ = 0.413). The odds ratio (OR), expressed as high AFAP1-AS1 expression group versus low AFAP1-AS1 expression group, was 2.71 (95% CI: 1.98–3.72, Figure 7). According to the result, there was a significant difference in the lymph node metastasis incidence between the two groups. And the results demonstrated that high expression of AFAP1-AS1 significantly predicted more prone to developing lymph node metastasis for patients with cancer. 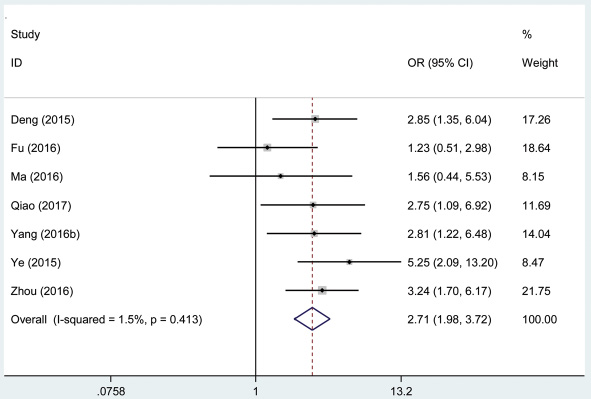 Association between the AFAP1-AS1 expression level and distant metastasis

Seven hundred patients with cancer from 7 eligible studies were collected and analyzed. The fix effects model was used for limited heterogeneity (I2 = 29.0%, PQ = 0.207). The odds ratio (OR), expressed as the high AFAP1-AS1 expression group versus low AFAP1-AS1 expression group was 2.96 (95% CI: 2.03–4.32, Figure 8). According to the result, there was a significant difference between the two groups in the distant metastasis incidence. Additionally, the results demonstrated that a high expression of AFAP1-AS1 significantly predicted a higher tendency to develop distant metastasis in patients with cancer. 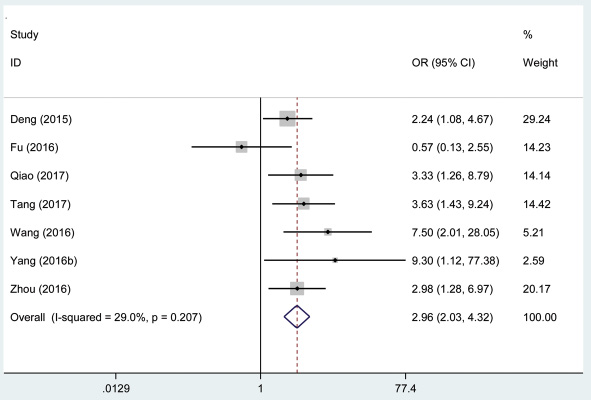 Cancer remains a serious threat to human health, and the incidence of cancer has increased gradually in recent years [1]. The occurrence of metastasis is an important indicator of a poor prognosis [32, 33], but the precise mechanism on metastasis remains uncertain in cancer patients. At present, cancer research hotspot-molecular biomarkers play a critical role in the prediction and treatment of cancer [34, 35]. It therefore continues to be necessary to identify new molecular markers predictive of tumor metastasis. Among these molecular markers are lincRNAs, which can impact both the occurrence and development of tumors, and have shown potential to serve as easily collected biomarkers useful for diagnosing and monitoring tumors [36].

These studies suggest that lncRNA AFAP1-AS1 may serve as an important prognostic factor in cancer patients. Until now, the underlying mechanisms by which AFAP1-AS1 affected human cancers and its utility as a biomarker remained largely unclear. Through this meta-analysis, we explored the clinicopathologic significance and prognostic value of AFAP1-AS1 in cancer patients.

There were several limitations that must be taken into account while interpreting the conclusions of the present meta-analysis. First, all included studies were from China. Therefore our data may not be globally applicable. Second, the included types and numbers of cancers were small. Third, seven articles did not mention the criterion used to define high expression, and the cut-off value for high expression in the remaining nine articles was the median. Therefore, additional well-designed, high-quality studies are needed to confirm the function of AFAP1-AS1 in cancer.

According to the standard guidelines of meta-analyses [37, 38], a systematic search was performed by two authors independently in the electronic databases of Medline, Pubmed, OVID, and Web of Science for relevant articles that concerned AFAP1-AS1 as a prognostic biomarker for the survival of cancer patients. The latest search was updated on Augest 7, 2017. We performed literature search by both text word and MeSH strategy with the terms ‘‘AFAP1-AS1’’, “actin filament-associated protein 1 antisense RNA 1”, ‘‘lncRNA AFAP1-AS1”, ‘‘lncRNA” or ‘‘ noncoding RNA’’ or ‘‘long intergenic noncoding RNA”, ‘‘carcinoma” or ‘‘neoplasm’’ or ‘‘tumor” or ‘‘cancer” , ‘‘prognostic” or ‘‘prognosis’’, ‘‘outcome” or ‘‘survival or ‘‘recurrence’’. The strategy was correspondingly adjusted in the different databases. In the retrieval process, we made a manual search using the reference lists of the relevant articles to include eligible studies.

Two researchers evaluated all of the included studies and extracted the data independently. The inclusion criteria were as follows: 1) the relationship between AFAP1-AS1 expression and survival was measured in multiple human tumors; 2) the expression levels of AFAP1-AS1 in human tumor tissue were measured, and the patients were grouped according to the expression levels of AFAP1-AS1; 3) all of the tumors were confirmed by pathological or histological examinations; 4) studies statistically analyzed patient survival or pathological parameters such as lymph node metastasis, tumor size and tumor stage, with respect to AFAP1-AS1 expression.

The following studies were excluded: 1) reviews, letters, editorials, and expert opinions; 2) non-English language and non-human studies; 3) studies with the molecular structure and functions of AFAP1-AS1 only; 4) database analysis without original data.

Two reviewers extracted and examined the data from the original articles independently. Disagreements in the literature assessment were resolved through consensus with a third reviewer. The following data were collected: surname of the first author, publication year, country, tumor type, sample size, the number of patients with lager tumor size, poor histological (differentiation) grade, high tumor stage, lymph node metastasis and distant metastasis, description of the cut-off value of AFAP1-AS1, HR and 95% CI of elevated AFAP1-AS1 for OS.

Statistical analyses were performed using Stata version 12.0 software. The heterogeneity among different studies was measured by the Q and I2 tests. A probability value of I2 ≥ 50%, and P < 0.1 indicated the existence of significant heterogeneity [39]. A random effects model or fixed effects model was used depending on the results of heterogeneity analysis. If there was a significant heterogeneity among the studies, the random-effects model was adopted. The potential publication bias was assessed by the Begg’s funnel plot and Egger’s test. Pooled HRs and ORs were extracted from the published data. If the HRs can be obtained directly from the publication, we used crude ones. While the HR and 95% CI were not directly reported in the studies, survival information was extracted from Kaplan-Meier curves and was used to estimate the HR. The log HR and SE were used to summarize the outcome of survival [40]. OR and their 95% CI were combined to assess the association between AFAP1-AS1 expression and clinicopathological parameters, including tumor size, histological (differentiation) grade, tumor stage, lymph node metastasis and distant metastasis.

This article was supported by the Youth Fund Project of the First Affiliated Hospital of Xinxiang Medical University (Qiankun Ji).

The authors declare that there is no conflicts of interests regarding the publication of this paper.