Association between red and processed meat intake and colorectal adenoma incidence and recurrence: a systematic review and meta-analysis

The associations between red and processed meat intake and colorectal adenoma (CRA) incidence and recurrence are inconclusive. We performed a systematic review and meta-analysis to analysis these associations. We conducted a systematic search of PubMed, EMBASE and Web of Science up to December 2016. The relative risks (RRs) and 95% confidence intervals (CIs) were assessed. Subgroup analyses, dose-response-analyses, subtype analyses and analyses of CRA locations were also conducted. Twenty-seven studies that involved 208,117 participants and 19,150 cases met criteria. The RRs of the highest versus lowest intakes for CRA incidence were 1.23 (1.15–1.31) for red meat and 1.15 (1.07–1.24) for processed meat. Dose-response analyses for meat per 100 g/day yielded the results were consistent with the original analyses, with 1.14 (1.07–1.20) for red meat and 1.27 (1.03–1.50) for processed meat. Additionally, there were no associations between red and processed meat intake and CRA recurrence, including total CRA (P > 0.05), advanced CRA (P > 0.05) and multiple CRA (P > 0.05). In conclusion, our findings support the hypothesis that red and processed meat intake was associated with an increased CRA incidence but not for CRA recurrence. 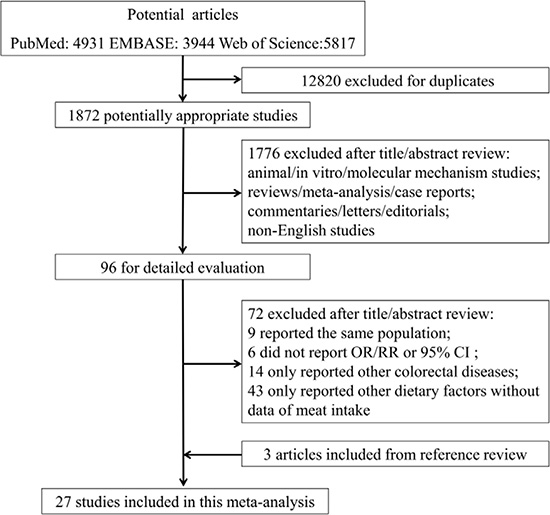 Figure 1: Flowchart of process for identification of relevant studies. 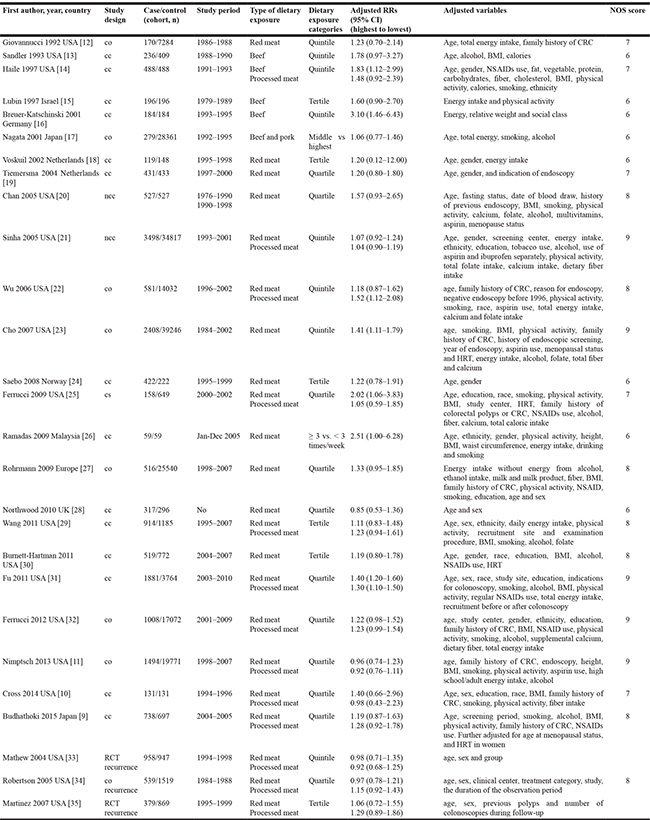 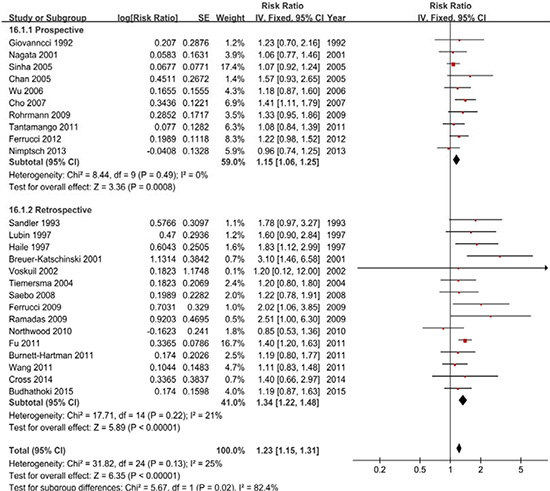 Eighteen studies were included, and the results of 1.14 (1.07–1.20) suggested that the CRA incidence increases by 14% for each 100 g/day increase in red meat intake (P < 0.01). Furthermore, we checked for nonlinearity of the dose-response relationship and the evidence showed that the best-fitting model was nonlinear model (Pnonlinearity < 0.01) (Supplementary Figure 3A). 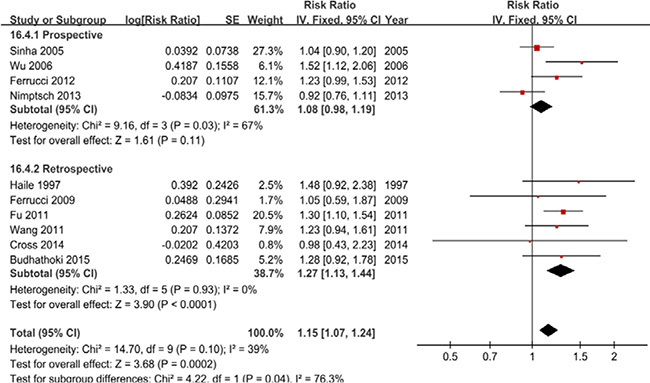 Nine studies were included, and the results of 1.27 (1.03–1.50) suggested that the CRA incidence increases by 27% for each 100 g/day increase in processed meat intake (P = 0.03). Furthermore, we checked for nonlinearity of the dose-response relationship and the evidence showed that the best-fitting model was nonlinear model (Pnonlinearity< 0.01) (Supplementary Figure 3B).

On the one hand, our findings supported the hypothesis that high intakes of red meat and processed meat increased the CRA incidence. Similarly, the dose-response analyses found positive associations for red meat and processed meat. Furthermore, the results of subgroup analyses that were based on the main adjustment for confounders were consistent for each confounder and similar to the original analyses. Additionally, subtype of analyses for red meat (beef) and processed meat (bacon) yielded the consistent results with the original estimates. We also performed the analyses of CRA locations, which further showed that positive associations were observed in distal CRA for red meat and in proximal CRA for processed meat. We specifically analyzed the ratio of red meat/white meat, and the positive results indicated that the types of meat and the ratio may be associated with CRA risk.

Several potential mechanisms may contribute to the effects. First, the positive associations between red and processed meat intake and CRA risk may be biologically plausible. Cooking red and processed meat is considered one of the major sources of carcinogens, such as heterocyclic amines (HCAs), polycyclic aromatic hydrocarbons (PAHs), nitrate and N-nitroso compounds (NOCs), which are believed to play important roles in the etiology of cancer [37–39] and adenoma [35, 40]. Second, a high iron intake from red meat may play a role in cancer [41] and CRA [42] by promoting the endogenous formation of carcinogenic N-nitroso compounds, causing oxidative damage and lipid peroxidation [43]. Third, positive associations have also been reported to be due to genetically controlled differences. Some specific genetic polymorphisms are considered to be involved in the pathogenesis of CRA [44]. Finally, gut microbial metabolites may be associated with meat intake [45], and bacteriological evidence has revealed possible mechanisms that explain the positive associations to a certain extent [46, 47].

There are several limitations in this meta-analysis. First, information on several of the major confounders, such as the intake of vegetable and fruit, could not be provided in all studies. Thus, the findings should be considered carefully due to possible confounding. Second, the different exposure ranges from the lowest to highest categories among included studies contributed to possible heterogeneity. Nevertheless, we adopted the RRs for the comparison of the highest to lowest categories. Additionally, dose-response analyses were conducted to verify the estimate. Third, the cooking methods, storage conditions, production methods and nutrient contents of meat may differ among studies, and the measurement errors to assess meat intake may lead to bias. We cannot thoroughly exclude the potential residual confounding. Finally, the language of studies was limited to English, and several studies with null estimates might not have been reported. Thus, we detected publication bias using the funnel plot, Egger’s test, and the sensitivity analysis, which suggested the negligible publication bias.

Our analysis has several strengths. First, this study provided sufficient robust, reliable and current evidence and increased the statistical power based on a substantial sample size and a quantitative synthesis of the eligible data. These data Second, we examined the association between red and processed meat intake and CRA incidence (proximal colon/distal colon/rectum) and recurrence (total/advanced/multiple). We performed subtype analyses of white meat (poultry and fish) to further explore the association. In addition, we conducted subgroup analyses for CRA according to the main risk factors (smoking, alcohol, BMI, energy intake, physical activity, dietary fiber, family history of polyps/CRC and nonsteroidal anti-inflammatory drugs) and the main confounding factors between studies (study design, publication year, sample size and geographic area) to explore the stability of pooled estimates. Third, dose-response analyses were performed to further assess the association rather than simply conducting categorical comparisons. All the independent analyses provided detailed data and increased the statistical power and the strength of our conclusion. Fourth, the study selection and data extraction were performed independently and in duplicate by two authors, which increased the validity of our findings. Finally, the heterogeneity and publication bias of this meta-analysis was negligible, which increased the reliability of our results.

Selection criteria were as follows: studies that diagnosed patients with endoscopy by histological features and biopsy that were consistent with the diagnostic gold standard were included; data that could not be combined were excluded; data that were incomplete were excluded; studies published as original articles were included; pooled analyses, systematic reviews, meta-analyses, narrative reviews, editorials, case reports, letters and comments were excluded; colorectal adenocarcinoma, precancerous lesions and other colorectal tumors were excluded; the included studies were limited to those involving humans and the language was limited to English.

A random-effects model was used if there was heterogeneity among studies, and a fixed-effects model was used without heterogeneity. The median or mean level for each category was assigned to each corresponding RR. The non-linear dose-response analysis was conducted using the method described by Greenland et al [50]. The studies that reported RRs with the corresponding 95% CIs for at least 3 quantitative exposure categories were included.

48. Stang A. Critical evaluation of the Newcastle-Ottawa scale for the assessment of the quality of nonrandomized studies in meta-analyses. Eur J Epidemiol. 2010; 25:603–605.