Gastric cancer (GC) is one of the most prevalent cancers around the world, accounting for almost 10% of all cancer death [1]. Because the clinical symptom is not obvious at early stage, patients with GC are often detected at late stage, thus causing an extremely low 5-year survival rate [2]. Surgery is considered as the main treatment for patients with GC. However, for patients who miss the best time for surgery, palliative chemotherapy is the main choice of treatment. During the past decades, several new-generation cytotoxic agents including docetaxel have been used for the treatment of GC [3]. Docetaxel has been reported to promote the assembly and stabilization of microtubules to inhibit the depolymerization in the treatment of GC [4, 5]. However, obvious resistance to docetaxel has been reported in some types of tumors including prostate cancer, breast cancer, GC and nasopharyngeal carcinoma, seriously limiting the treatment effect of docetaxel [4, 6–9]. Therefore, inhibiting chemoresistance to docetaxel in GC may be a key role for improving therapeutic effects for GC patents.

Autophagy is a cellular process which delivers intracellular aggregated or misfolded proteins to the lysosomal compartment where they are degraded and recycled [10]. Previous studies reported that activation of autophagy enhanced chemoresistance in various cancers. Fukuda’s study indicated that inhibition of autophagy suppressed proliferation and overcame Cisplatin resistance of endometrial cancer cells [11]. A study by Zhang revealed that inhibition of TRPC5-induced autophagy suppressed drug resistance to Adriamycin in breast carcinoma [12]. However, detailed contributions of autophagy to chemoresistance of GC cells are still limited and require for further investigations.

MicroRNAs (miRNAs), a group of small non-coding RNAs with 20-22 nucleotides, are reported to regulate the expression of specific genes [13]. Accumulated evidence indicated that miRNAs were involved in a great number of cellular processes including proliferation, apoptosis, migration and invasion during tumor progression [14, 15]. Previous studies showed that some miRNAs such as miR-608 and miR-204 suppressed chemoresistance of tumor cells [16, 17]. MiR-361-5p, one of the miRNAs, was found to function as a tumor suppressor in various tumors. Previous study showed that overexpressed miR-361-5p inhibited tumor growth of hepatocellular carcinoma in nude mice significantly [18]. However, whether miR-361-5p can regulate chemoresistance of tumor cells is still unclear.

MiRNAs are reported to regulate the expression of their target genes to accomplish their effects. In our presents study, we found that FOXM1, a newly unified family member of Forkhead transcription factor, was one of the target genes of miR-361-5p [19]. FOXM1 was reported to confer resistance to herceptin and paclitaxel by altering microtubule dynamics to protect tumor cells from paclitaxel-induced apoptosis in breast cancer [20]. As both docetaxel and FOXM1 affected the microtubules dynamics, we suggested that FOXM1 might involve in chemoresistance to docetaxel, however, little research has been carried out.

We initiated our study by investigating whether there was an association between miR-361-5p and chemoresistance to docetaxel of GC cells. SGC-7901 cells which were resistant to docetaxel and MKN-28 cells which were sensitive to docetaxel were treated with different concentrations of docetaxel and then cell viability was detected by MTT assay. We observed that docetaxel worked as an anti-tumor regent by suppressing cell viability significantly in a dose-dependent manner and the cell viability of SGC-7901 was higher than docetaxel sensitive cell line MKN-28 under the same concentration of docetaxel. Moreover, the half maximal inhibitory concentration (IC50) values of docetaxel were approximately 0.025 mg/L and 0.015 mg/L in miR-361-5p mock transfected SGC-7901 cells and miR-361-5p mimic transfected SGC-7901 cells, respectively. However, the IC50 in miR-361-5p mock transfected and miR-361-5p mimic transfected MKN-28 cells were approximately 0.015 mg/L and 0.013 mg/L respectively. These results suggested that overexpression of miR-361-5p increased the sensibility to docetaxel of gastric cancer cells and the promoting role was more obviously in docetaxel resistant cells (Figure 1A-1B). Apart from that, results from cell apoptosis assay indicated that overexpression of miR-361-5p increased cell apoptosis rate compared with docetaxel + mock group in both docetaxel treated SGC-7901 and MKN-28 cells (Figure 1C-1D, P* < 0.05, P# < 0.05). Docetaxel resistant cells SGC-7901 were chosen for following experiments. In conclusion, our results suggested that overexpressed miR-361-5p inhibited chemoresistance of GC cells to docetaxel. 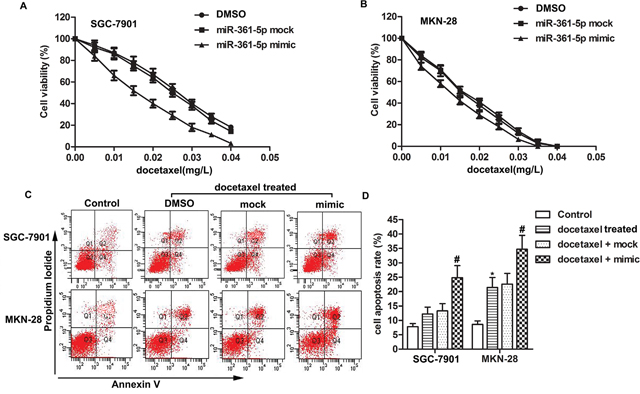 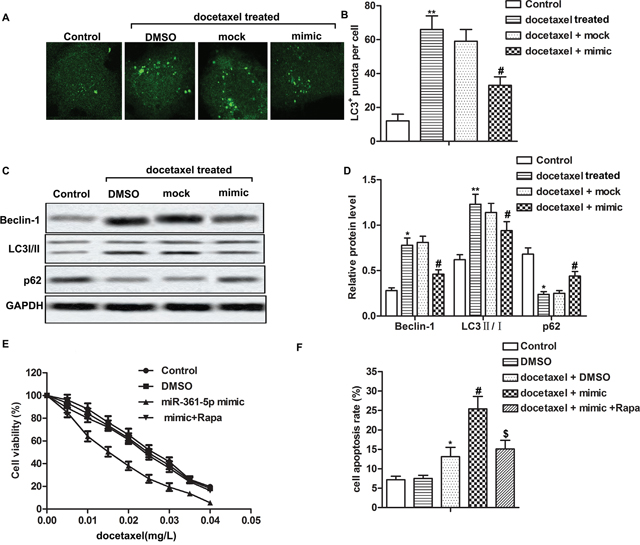 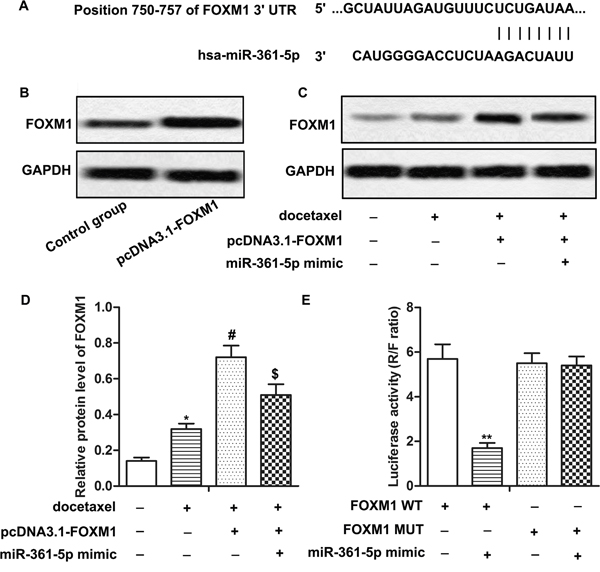 Having learned the relationship between FOXM1 and miR-361-5p, we then set to explore the mechanism of miR-361-5p in chemoresistance of GC cells. Co-transfection with miR-361-5p mimic and pcDNA3.1-FOXM1 increased the number of LC3+ puncta, the expression of Beclin-1 and the ratio of LC3 II/I while decreased the expression of p62 compared with docetaxel + mimic group, indicating that overexpressed FOXM1 weaken the inhibitory effect of miR-361-5p on autophagy (Figure 4A-4D, P* < 0.05, P** < 0.01, P# < 0.05, P$ < 0.05). Besides that, our data showed that IC50 values were approximately 0.015 mg/L and 0.025 mg/L in miR-361-5p mimic group and mimic + FOXM1 group respectively and overexpressed FOXM1 inhibited cell apoptosis compared with docetaxel + mimic group remarkably, suggesting that overexpressed FOXM1 counteracted the inhibitory effect of miR-361-5p on chemoresistance of GC cells (Figure 4E-4F, P* < 0.05, P# < 0.05, P$ < 0.05). Taken together, these data clearly indicated that overexpression of FOXM1 counteracted the inhibitory effects of miR-361-5p on autophagy-induced chemoresistance in GC cells. 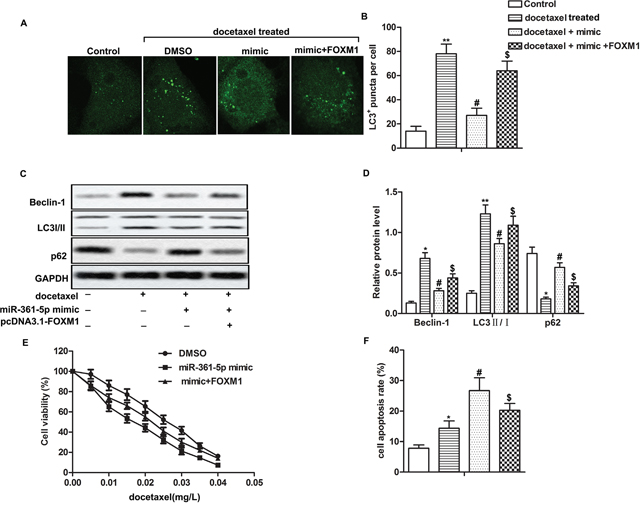 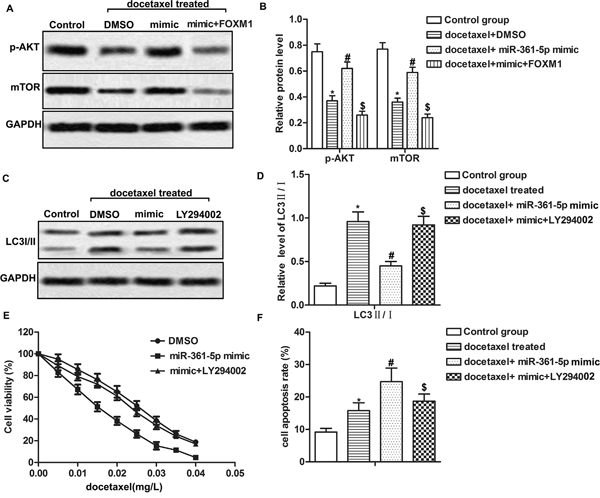 MiRNAs have gained increasing attentions as they appeared to be involved in tumor progression. Increasing evidence supported that miRNAs acted as tumor suppressors or oncogenes and involved in post-translational regulation of gene expression [25]. Previous studies reported that a great number of miRNAs were related to chemoresistance in various cancers. For example, Rajabpour’s study revealed that miR-608 suppressed gemcitabine chemoresistance through regulating the resistance genes in pancreatic cancer cells [16]. Besides that, microRNA-204 was reported to increase chemosensitivity of prostate cancer cells [17]. Recently, accumulating evidence supported that miR-361-5p acted as a tumor suppressor in many kinds of tumors. Zhuang’s research indicated that down-regulation of miR-361-5p associated with aggressive clinicopathological features and unfavorable prognosis in non-small cell lung cancer [26]. It was also reported that miR-361-5p inhibited epithelial-to-mesenchymal transition through targeting Twist1 in glioma cells [27]. However, whether miR-361-5p could regulate chemoresistance of tumor cells still remained unknown. In our present study, SGC-7901 cells which were resistant to docetaxel and MKN-28 cells which were sensitive to docetaxel were chosen for our experiments. Results indicated that overexpressed miR-361-5p in SGC-7901 and MKN-28 cells decreased the IC50 value of docetaxel and increased cell apoptosis rate, suggesting that miR-361-5p inhibited chemoresistance to docetaxel of SGC-7901 and MKN-28 cells and the inhibiting effect was more obviously found in SGC-7901 cells. Our results elucidated that the inhibitive effect of miR-361-5p on chemoresistance in GC cell lines.

Furthermore, our bioinformatics study revealed that FOXM1 was one of the potential targets of miR-361-5p. FOXM1, a proliferation specific oncogenic transcription factor, was reported to regulate microtubule dynamics to mediate chemoresistance of tumor cells [20]. Previous research discovered that inhibition of FOXM1 could reverse docetaxel resistance in GC [4]. FOXM1 also mediated resistance to herceptin and paclitaxel in breast cancer [20]. Another study from Hou elucidated that overexpression of miR-361-5p suppressed lung cancer proliferation and invasion by targeting FOXM1 [30]. Consistent with previous researches, we found that the expression of FOXM1 was negatively regulated by miR-361-5p. Overexpressed FOXM1 enhanced autophagy and chemoresistance to docetaxel of GC cells, suggesting that overexpression of FOXM1 weakened the inhibitory effects of miR-361-5p on autophagy-induced chemoresistance in gastric cancer cells.

Taken together, our present study demonstrated that miR-361-5p/FOXM1 axis played an important role in regulating chemoresistance to docetaxel of GC cells. MiR-361-5p suppressed autophagy-induced chemoresistance of GC cells by targeting FOXM1 via the PI3K/Akt/mTOR pathway, providing a foundation for the mechanism research and treatment of GC.

The human FOXM1 expression vector pcDNA3.1-FOXM1 was transfected into cells using Lipofectamine 2000 reagent in accordance with the manufacturer’s protocol.

For MTT assays, 5x103 cells were seeded into 96-well plates in triplicate and cultured with 100 μL of fresh medium which contained different concentrations of docetaxel for 48 h. Then, MTT solution (20 μL, 5 mg/ml in PBS) was added to each wells and incubated at 37°C for 4 h. After that, the solution was removed and 200 μL of DMSO was added to each well. The optical density at 490 nm was measured by a microplate reader (Bio-Rad, Hercules, CA, USA) after 10 min of vibration mixing.

For cell apoptosis analysis, Annexin V-FITC/propidium iodide (PI) apoptosis detection kit (Multisciences, Shanghai, China) was used in our present study. Firstly, different groups of cells (3x105) were collected and washed in ice-cold PBS. Then cells were resuspended and incubated with 5 μL of Annexin V-FIFC and 10 μL of PI. Cell apoptosis was analyzed in a flow cytometer (BD Biosciences).

MiR-361-5p mimic or mock transfected SGC-7901 cells were transfected with GFP-LC3 plasmid by Lipofectamine 3000™ (Invitrogen). After untreated SGC-7901 cells or transfected cells treated with or without docetaxel, the number of puncta formation of GFP-LC3 was determined under fluorescent microscopy as described before [33]. Cells with more than 5 puncta counted were considered to have accumulated autophagosomes.

All results were presented as mean ± standard deviation (SD). Student’s t test was performed to analyze the difference between groups. Statistical analysis was performed with SPSS software (version 19). Values of P < 0.05 were considered statistically significant.

All the authors conducted the conception and design of the study, acquisition and interpretation of data, drafting the article, final approval of the version to be published equally.

Supported by No. 2015020329 Natural Science Foundation of Liaoning Province of China.