2Graduate School of Arts and Sciences, The University of Tokyo, Tokyo, Japan

Materials and Methods: In this study, the prognostic values of the preoperative lymphocyte count and the post/preoperative lymphocyte count ratio (PPLR) were evaluated in 142 patients with localized colon cancer treated with surgery at a single medical center. The associations of patient demographics, blood chemistry, and serum biochemical indices with recurrence-free survival (RFS) and cancer-specific survival (CSS) were examined by univariate and multivariate analyses.

Conclusion: The combination of the preoperative lymphocyte count and the PPLR appears to be a potential marker for predicting recurrence of stage II colon cancer.

Colorectal cancer (CRC) is the third most commonly diagnosed malignancy, the fourth leading cause of cancer-related deaths worldwide [1], and the second most common cause of cancer-related death in Japan [2]. During the past two decades, advances in chemotherapy protocols have drastically decreased the risk of cancer recurrence and improved overall survival time of patients with stages III and IV [3–8]. On the other hand, use of chemotherapy among patients with stage II colon cancer is controversial [9, 10], as is the usefulness of adjuvant chemotherapy after surgery. Therefore, better prognostic markers are needed to improve the outcomes of patients with CRC.

Currently, several predictors for recurrence of curatively resected CRCs have been proposed. For instance, carcinoembryonic antigen (CEA) is a prognostic marker for long-term CRC recurrence [11, 12]. Additionally, the hemogram of the peripheral blood could be a useful diagnostic marker. For instance, the lymphocyte count [13, 14], the systemic inflammation score (SIS) [15], the lymphocyte and monocyte ratio (LMR) [16], the neutrophil and lymphocyte ratio (NLR) [17], the platelet to lymphocyte ratio (PLR) [18], and the platelet distribution width (PDW) [17] have been reported to be correlated with disease-free survival (DFS) and overall survival (OS) in patients with CRC. However, according to the European Group on Tumor Markers (EGTM) published guidelines, CEA is more useful for postoperative surveillance than as a predictor of recurrence [19]. Other predictors have been emerging over the last several years, and they are not yet practically useful. Therefore, more potential prognostic markers are required. In the present study, the aim was to identify other prognostic markers for CRC, and it was found that combined use of the lymphocyte count and the post/preoperative lymphocyte count ratio (PPLR) was an effective prognostic marker.

A total of 142 patients with Stage II colon cancer who underwent curative surgery in our hospital between January 2008 and December 2014 were enrolled in the study (Figure 1). The male to female ratio was around 1.3: 1. The mean age at the time of diagnosis was 72 years (range, 43 to 94 years). In the present study cohort, 17 patients (12.0%) developed tumor recurrence during the follow-up period. Among them, including overlaps, 4 patients showed local recurrence, 5 patients had peritoneal metastases, 5 patients had liver metastases, 4 patients had lung metastases, and 1 had brain metastasis. Five patients (3.5%) died from cancer recurrence. Laboratory results, including various blood cell counts, are shown in Table 1. The median follow-up duration was 47.0 months (range, 6.1 to 116.3 months). 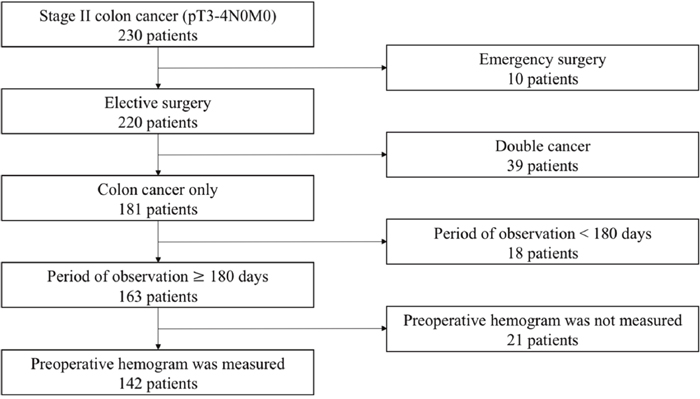 Figure 1: Flow chart of the 230 patients enrolled in this study. 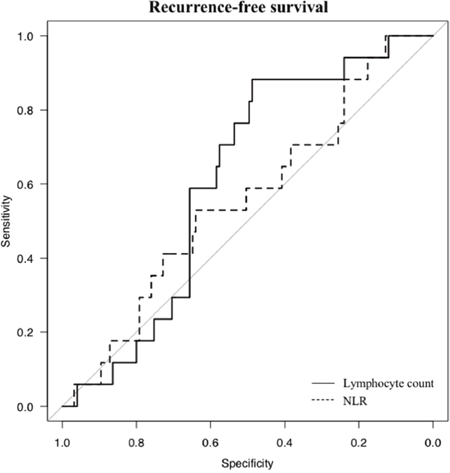 Table 3: Relationships between clinical characteristics and the preoperative lymphocyte count 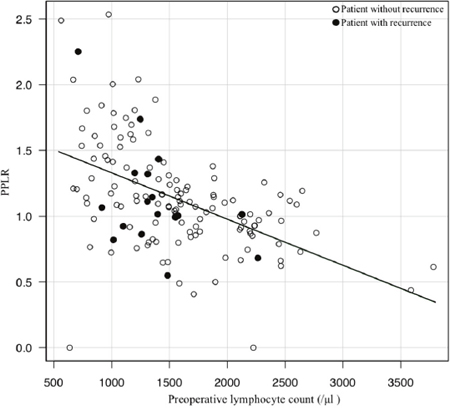 Patients in category 4 had a worse RFS (log-rank p < 0.0001) (Figure 5A) and a worse CSS (log-rank p = 0.00128) (Figure 5B) compared to the patients in other three categories. These data suggest that the predictive accuracy for colon cancer recurrence based on lymphocyte number increases in combination with PPLR.

CRC is one of the most frequent cancers affecting both sexes worldwide. Surgery and adjuvant chemotherapy with an oral uracil and tegafur plus leucovorin (UFT/UZEL) regimen have become standard therapy for patients with high-risk stage II and stage III colon carcinomas [3]. Nearly 25% of patients who undergo surgical resection for localized colon cancer will experience disease recurrence [10]. Although retrospective comprehensive studies showed strong associations between genetic mutations and the clinical outcomes of patients with CRC, no validated biomarkers are currently used in routine clinical settings [20]. Recently, components related to immunity have been of interest as diagnostic markers for CRC, including NLR [17] and PDW [17], and these diagnostic markers have a potential for practical use.

The lymphocyte count decrease in patients with recurrent CRC may be due to the possibility that patients who naturally have a low lymphocyte could more easily develop recurrent colon cancer. As to why PPLR is a predictive marker, it is considered that the lymphocyte counts increase after tumor resection (1548.0/μl before surgery, 1640.7/μl after surgery, p = 0.046; data not shown). These data indicate that lymphocytes are accumulated and consumed at the tumor and metastatic foci, as shown in previous reports [24, 25], and/or that tumors inhibit lymphocyte production ability in the bone marrow, presumably through soluble factors including exosomes [26, 27]. Therefore, after successful cancer resection, postoperative lymphocyte counts should increase compared to preoperative lymphocyte counts. Thus, a low PPLR indicates that there could be still remaining tumors or micrometastatic foci.

For patients with a low lymphocyte count and a low PPLR, a better drug treatment would be one that would increase the number of lymphocytes, such as protein-bound polysaccharide kureha (Kureha Corporation, Tokyo, Japan), Z-100 (ZERIA Pharmaceutical Corporation, Tokyo, Japan) [28, 29]. Furthermore, immune-enhancing nutritional supplements may be effective [30, 31]. The advantage of this approach is that lymphocyte counts and PPLR are easy and inexpensive to monitor. In addition, identifying the types of lymphocytes that are reduced would be informative for the development of new drugs and therapeutic approaches. In order to clarify this, further studies using flow cytometry and antibodies for lymphocytes such as T and B cells would be needed. In sum, the number of lymphocytes and PPLR could be used in clinical settings to predict the prognosis of patients with colon cancer after curative resection.

A retrospective review of a database with 142 patients who had undergone curative surgery for histological TNM stage II colon cancer between January 2008 and December 2014 at a single institution (Nippon Medical School Hospital, Bunkyo-ku, Tokyo, Japan) was conducted. Disease stage was established in accordance with the AJCC 7th classification. The exclusion criteria included: emergency surgery (colorectal cancer with intestinal perforation or obstruction), 10 patients; double cancer, 39 patients; period of observation less than 180 days, 18 patients; and incomplete clinicopathological data, 21 patients (Figure 1). Fourteen of 142 patients received adjuvant chemotherapy after surgery, including oral adjuvant uracil and tegafur plus leucovorin (UFT/UZEL) in 11 patients and capecitabine in 3 patients. Follow-up investigations included clinical check-ups, laboratory measurements (including routine blood examinations and cancer-related marker analysis, such as CEA and CA19-9, every 3–6 months), radiological assessment (abdomen and chest computed tomography, every 6–12 months), and colonoscopy (one and three years after the surgery). All patients were followed-up from 6.1 to 116.3 months after surgical treatment. RFS was defined as the interval from radical surgery to recurrence. This study was conducted in accordance with the principles embodied in the Declaration of Helsinki and approved by the ethics committee of Nippon Medical School. (Registration no. 29-07-781).

The chi-squared test or Fisher’s exact test were used for categorical variables. Quantitative data are presented as means ± standard deviation and compared using the Mann-Whitney U test. Pearson’s test was used for correlations. Univariate analysis was performed to evaluate clinical characteristics related to RFS. On multivariate Cox regression analysis, the model was adjusted for prognostic clinicopathological factors on univariate analysis. Hazard ratios estimated from the Cox regression analysis are reported as relative risks with corresponding 95% confidence intervals. Survival curves were prepared using the Kaplan-Meier method and compared by the log-rank test. All statistical analyses were performed with EZR (Saitama Medical Center, Jichi Medical University, Saitama Japan), which is a graphical user interface for R (The R Foundation for Statistical Computing, Vienna, Austria). More precisely, it is a modified version of R commander designed to add statistical functions frequently used in biostatistics [32]. All analyses were two-sided, and a p value of <0.05 was considered significant.

This work was supported by PRIME from the Japan Agency for Medical Research and Development (to Y.U.).