This study aimed to evaluate correlations between lymphovascular invasion (LVI) and the expression of estrogen receptor (ER), progesterone receptor (PR), human epidermal growth factor receptor-2 (HER-2), Ki-67, CK5/6, epidermal growth factor receptor (EGFR), vascular endothelial growth factor (VEGF), E-cadherin, BCL11A and P53 in invasive breast cancer and to identify predictors of LVI based on these pathological factors. In all, 392 paraffin-embedded tissues from consecutive patients with primary operable invasive breast cancer were included. Immunohistochemistry (IHC) was retrospectively performed using a tissue microarray (TMA) of the paraffin-embedded tissues. LVI-positive rates were compared using the χ2 test. Correlations between pathological factors were assessed using Spearman’s test. Binary logistic regression was employed in multivariate analyses of statistically significant factors. The results showed that LVI positivity was significantly higher in patients with HER-2-positive expression or high Ki-67 expression. HER-2 expression was weakly positively correlated with Ki-67 expression. HER-2-positive expression and high Ki-67 expression were found to be risk factors for LVI, and associations between LVI and other pathological factors were not significant. Therefore, HER-2-positive expression and high Ki-67 expression are predictors of LVI, whereas the expression of ER, PR, CK5/6, EGFR, VEGF, E-cadherin, BCL11A and P53 is not associated with LVI in invasive breast cancer.

The prognosis of breast cancer is determined by certain clinicopathological factors, including the presence or absence of lymph node metastasis, tumor size, histological grade, estrogen receptor (ER) status, progesterone receptor (PR) status, human epidermal growth factor receptor-2 (HER-2) status, Ki-67 expression, and the presence or absence of lymphovascular invasion (LVI) [1]. LVI is the main route of lymph node metastasis and is a known independent predictor of lymph node metastasis, disease-free survival (DFS) and overall survival (OS) in breast cancer [2]. However, the mechanisms that underlie the development of LVI remain controversial. Since LVI presents in peritumoral vessels, the canonical view is that cancer cells invade lymphatic vessels and blood vessels. Conversely, Sepi Mahooti reported that LVI can result from encircling lymphovasculogenesis [3].

The BCL11A gene was first discovered in mice as a site for retroviral insertion and was initially referred to as CTIP1, also known as EVI9 [4]. It was later found in the human chromosome 2p16.1 region, has a total length of approximately 102 kb and encodes a Kruppel-like zinc finger protein [5]. The N-terminus of the protein has a constant C2HC zinc finger, and the C-terminus contains six C2HC zinc finger structures. Previous studies have shown that BCL11A binds to the 5′-GGCCGG-3′ motif of the promoter region of a target gene and affects the deacetylation of histone H3/H4, thereby inhibiting transcription of the target gene [6]. BCL11A is also a novel breast cancer gene that has been significantly correlated with a high histological grade; moreover, it is overexpressed in triple-negative breast cancer (TNBC) [7]. No studies have reported the relationships between LVI and BCL11A expression, and studies on the associations between LVI and the expression of ER, PR, HER-2, Ki-67, CK5/6, epidermal growth factor receptor (EGFR), vascular endothelial growth factor (VEGF), E-cadherin and P53 in invasive breast cancer have produced controversial results. Therefore, the current study aimed to investigate correlations between LVI and these pathological factors and to identify predictors of LVI from among these factors.

Comparison of LVI-positive rates in relation to different pathological factors

Table 1: Association between LVI and other pathological factors in invasive breast cancer

Immunohistochemistry (IHC) images for HER-2 and Ki-67 are shown in Figure 1. 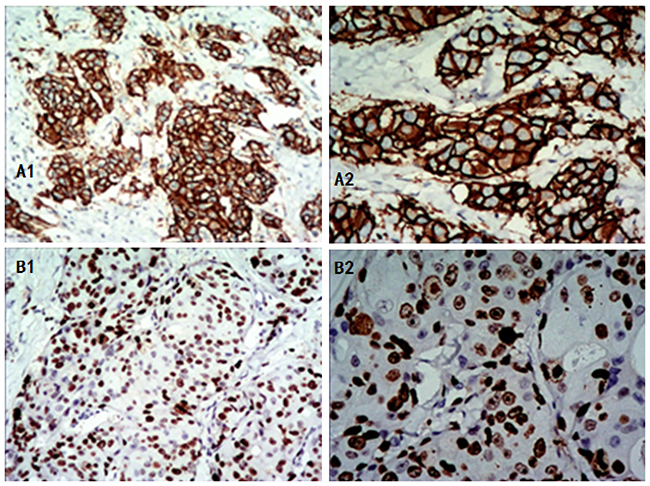 Correlations among HER-2, Ki-67 and pathological factors

Table 2: Correlation coefficients among HER-2, Ki-67 and pathological factors in invasive breast cancer

HER-2 is a tyrosine kinase receptor that activates critical signal transduction pathways. HER-2-positive expression can promote cell migration and invasion [8], resulting in highly aggressive breast cancer with poor outcomes. HER-2 positivity occurs in 15–20% of all breast cancers and is associated with increased metastatic potential and poor patient survival. Moreover, HER-2-targeted therapies can improve the prognosis of patients whose tumors are positive for HER-2 expression [9, 10]. In the current study, patients with HER-2-positive expression showed significantly high positive rates for LVI. Tan et al. also reported that HER-2 positivity is associated with LVI [11]. Multivariate analyses showed that HER-2-positive expression is a strong independent risk factor for LVI (OR=2.719), which is consistent with previous reports [12].

In the current study, no significant differences were found in the rates of LVI between tumors with positive BCL11A expression and those with negative BCL11A expression. To the best of our knowledge, this is the first report of such relationships. BCL11A is overexpressed in TNBC [7], and LVI is less frequent in TNBC than in other subtypes [12]. Therefore, BCL11A may serve as a good biomarker for the identification of TNBC, without affecting LVI [16].

In the current study, EGFR and VEGF expression were not correlated with LVI, which did not support the hypothesis that LVI can result from encircling lymphovasculogenesis. LVI also showed no correlations with ER, PR, CK5/6, E-cadherin or P53 expression. Therefore, we inferred that LVI was the result of rapid tumor growth.

In summary, the results of this study show that positive HER-2 expression and high Ki-67 expression are associated with LVI and are predictors of LVI in invasive breast cancer.

In all, 392 paraffin-embedded tissue samples were collected from consecutive patients with primary operable invasive breast cancer who were diagnosed between 2010 and 2015 at Yuebei People’s Hospital. All data were anonymized prior to analysis. This study was approved by the Institutional Review Board of Guangzhou Medical University. None of the enrolled patients underwent radiotherapy, chemotherapy or hormone therapy prior to the extraction of pathological specimens. The samples were collected from lumpectomy or mastectomy specimens, fixed in 10% neutral buffered formalin, and embedded in paraffin. To analyze pathological factors, immunohistochemical staining was retrospectively performed on the collected tissues, which were arranged in a microarray (24 tissue cores per block, 0.6 mm in diameter). The donor tissue blocks containing the most representative and well-preserved tumor areas were marked by a pathologist according to the corresponding hematoxylin & eosin (H&E)-stained slides. These blocks were screened for immunohistochemical staining. Each sample was obtained from the corresponding case and mounted in a recipient block. The following pathological factors were retrospectively analyzed: the expression of ER, PR, HER-2, Ki-67, CK5/6, EGFR, VEGF, E-cadherin, BCL11A and P53 and the presence of LVI.

LVI was assessed on H&E-stained sections of original cancer tissues. LVI was defined as the presence of cancer cells within a definite endothelial-lined space (lymphatic or blood vessel) (Figure 2). LVI included both lymphatic and blood vessel invasion. 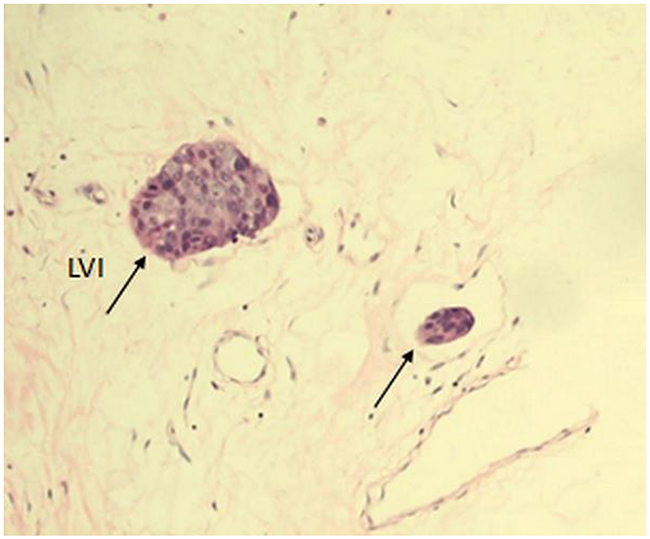 Statistical analysis was performed using SPSS version 20.0 (SPSS Inc., Chicago, IL, USA). LVI-positive rates were compared across different pathological factors using the χ2 test. Correlations between pathological factors were assessed using Spearman’s test. To predict LVI, binary logistic regression using the “enter” method was used for statistically significant factors in multivariate analyses. All statistical analyses were 2-sided, with significance defined as a P value <0.05. The OR and 95% CI were calculated for each variable.

We acknowledge the support of the pathology technologist (Caiyun Tan) involved in the sample collection and Weiren Ding for revising the manuscript.

This research received grants from the Medical Research and Innovation Fund of Qingyuan People’s Hospital.