Ischemic stroke, one of the most complex vascular disease with highly morbidity and mortality, continues to be a major global health problem among worldwide [1]. Conventional risk factors like hypertension, dyslipidemia, drinking and smoking are relation to the etiology of ischemic stroke [2]. Furthermore, genetic factors are considered to play an important role in the susceptibility to ischemic stroke [3]. Understanding the genetic polymorphisms is an essential part for evolving new therapeutic strategies and selecting molecular markers that may help identify people at high risk [4].

The LAA stroke is a subtype of TOAST (Trial of Org 10172 in Acute Stroke Treatment) classification [5]. LAA stroke has the highest risk of early neurological deterioration and early stroke recurrence than other acute ischemic stroke (AIS) subtypes [6]. The process of LAA stroke is usually begin with the vulnerable plaque rupture, accompanying by the formation of thrombus and occlusion of a cerebral artery, and leading to irreversible brain damage, blood brain barrier (BBB) disruption, and cellular edema [7]. The rupture of vulnerable atherosclerotic plaques is an important cause of cerebral infarction [8]. The fibrous cap thickness of atherosclerotic plaque is an important index to determine its risk, the minimal fibro cap thickness >101 μm often means low risk, while the minimal fibro cap thickness <65 μm was recognized as a high risk index [9]. The rupture of vulnerable plaques is related to the activity of Matrix metalloproteinases (MMPs) [10]. Whether cerebral infarction occurs in atherosclerotic patients, is related to the levels of MMPs and TIMPs in blood [11].

MMPs are a family of zinc-binding proteinases that play an important role in degrading the extracellular matrix (ECM) and pathological remodeling of blood vessels [12]. Matrix metalloproteinase-2 (MMP-2), one of important members of the MMPs family, has several roles in cerebral vascular diseases. The imbalance of MMP-2 and TIMP-2 plays a very important role in the formation of arterial aneurysm [13]. The atherosclerotic plaques have a high expression of MMP-2, and the unstable plaques have higher MMP-2 expression than the stable plaques [14]. Genetical studies demonstrated that MMP-2 polymorphisms have been found to be associated with the development of lacunar stroke [15]. Additionally, SNPs in MMP-2 gene was correlated with the functional outcome after stroke [16].

Conventionally, we believed that TIMP-2 is an important natural endogenous inhibitor of MMP-2. In fact, the relationship between TIMP-2 and MMP-2 is not simply as an inhibitor and substrate. There is a concentration dependent relationship between the TIMP-2 and MMP-2. When the concentration of TIMP-2 is low, its carboxyl-terminal domains and membrane type-1 matrix metalloproteinase (MT1-MMP/MMP-14), and carboxyl-terminal hemopexin-like domain (PEX) of MMP-2, can form a complex, which activate the pro-MMP-2, promote its maturity; when the concentration of TIMP-2 is high, TIMP-2 can combine with MMP-2 by its N-terminal domain, inhibiting MMP-2 activity. The relationship between TIMP-2 and MMP-2 is unique in the MMPs family, and many physiological and pathological processes are dependent on the balance between MMP-2 and TIMP-2 [17–18]. In cerebrovascular diseases, the imbalance of MMP-2 and TIMP-2 can cause vascular remodeling and dysfunction [19], cerebral aneurysm formation [20], disruption of blood brain barrier [21], destabilization of atherosclerotic plaque [22], hemorrhage transformation after cerebral ischemia [23]. Knockout of TIMP-1 and gene transfer of TIMP-1 and TIMP-2 in mice can accelerate the atherosclerosis formation and make atherosclerotic plaque unstable [24].

During the past years different SNPs within the MMP-2 gene and their association with cerebrovascular diseases were studied. However, data is lacking regarding the role of TIMP-2 polymorphisms in the susceptibility to ischemic stroke. Therefore, in the present investigation, we aimed to determine whether relevant SNPs within the TIMP-2 gene are associated with the susceptibility of LAA stroke in southern Chinese Han population. We carefully searched the databases of 1000 Genomes Project (http://www.1000genomes.org/) and dbSNP (https://www.ncbi.nlm.nih.gov/projects/SNP/), choose the SNPs which had minor allele frequencies (MAFs) >5% in Chinese Han Beijing (CHB) population, and had some previous studies. Finally, A total of six SNPs (i.e., rs2277698, rs2009196, rs7342880, rs11654470, rs2003241, rs4789936) were selected for further genotyping.

Table 2: Basic characteristics and allele frequencies of the six SNPs

aP values were calculated by unconditional logistic regression adjusted for gender and age;

bP values were calculated by unconditional logistic regression without adjustment of gender and age.

The results for the association between the TIMP-2 haplotype and the risk of LAA stroke are shown in Table 4 and Figure 1. In the linkage analyses, three TIMP-2 SNPs (rs2277698, rs2009196 and rs7342880) mapped in a 7kb LD block, however, there were no significant differences in haplotype frequencies among any of the groups.

aP values were calculated by unconditional logistic regression adjusted for age and gender;

bP values were calculated by unconditional logistic regression without adjusted by age and gender. 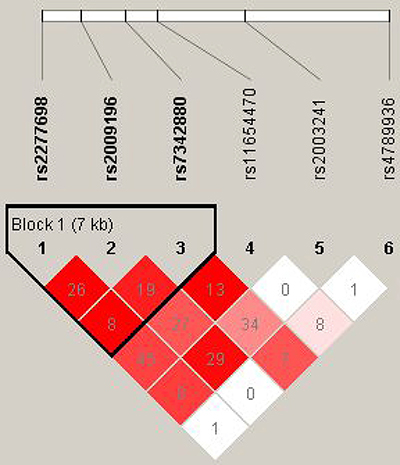 Figure 1: Haplotype block map for the 6 SNPs in the TIMP2 gene in our experiment. Red squares indicate statistically significant associations between a pair of SNPs, as measured by D’; darker shades of red indicate higher D’ values.

We conducted this case-control study to investigate the relationship between TIMP-2 polymorphisms and LAA stroke in a southern Chinese Han population. We found that the rs4789936 polymorphism in TIMP-2 gene was associated with the lower risk of LAA stroke, and rs2003241 polymorphism only had a marginal association with the lower risk of LAA stroke. However, we didn’t observe any associations between the polymorphisms rs2277698, rs2009196, rs7342880, rs11654470 and the LAA stroke. And no significant difference was found under haplotype analysis after adjustment of gender and age.

The SNPs rs2003241 and rs11654470 were studied for the susceptibility and survival of breast cancer [25], rs2009196 was studied in the abdominal aortic aneurysm [26], but no positive results were found. Rs2277698 is a SNP of many studies, which involved in pleural thickening calcification [27], abnormal sperm morphology [28], preterm prelabor rupture of membranes [29] and other pathological processes. The combination of rs7342880 and other loci can well diagnose the progression of rheumatoid arthritis of the knee [30]. However, in the present study, only rs2003241 had a marginal association with LAA stroke, and no significant relationship with LAA stroke was found in other loci.

Single nucleotide polymorphisms that cause protein structural defects or affect TIMP-2 transcription efficiency can cause cerebral infarction or cerebral hemorrhage by affecting the balance between TIMP-2 and MMP-2 [32]. Previous study has shown that the specificity of TIMP-2 for MMP-2 binding and inhibition can be modified by single amino acid mutations [33]. MMP-2 and TIMP-2 expression can be regulated by fluid shear stress, which are important factors contribute to atherosclerosis [34]. A majority of LAA stroke events are associated with the rupture of atherosclerotic plaque, MMP-2 activity plays a pivotal role in that process [35]. TIMP-2 is the most important endogenous regulator of MMP-2. Data from an in vitro stroke model of a human brain microvascular endothelial cell line show favorable effect of statin pretreatment on the MMPs metabolism, mainly by induced the expression and secretion of TIMP-1 and TIMP-2 [36]. In an animal model, the overexpression of TIMP-2 had shown the effect of inhibit atherosclerotic plaque development and destabilization [37].

The T allele of rs4789936 has a protective effect on LAA stroke. We speculate, rs4789936 itself may affect the transcription rate of TIMP-2 or in linkage disequilibrium with other polymorphisms. Ultimately, through the function of TIMP2 itself or by adjusting the balance of TIMP2/MMP2, it plays a protective role in the pathological process such as ameliorates vascular dysfunction and remodeling caused by hypertension [19], inhibits neointimal hyperplasia [38], carotid artery stenosis [39], rupture of atherosclerotic plaques [22], and reduces the incidence of LAA stroke. But these speculations were needed to further investigate.

The results presented here suffer from some limitations. Some other genetic polymorphisms may play a role in the development of LAA stroke, but our study only investigated the association between part of the TIMP-2 SNPs and the risk of LAA stroke. In addition, the sample size is relatively small, which may limit the statistical power to find the differences between groups.

Taken together, we analyzed the intron region of TIMP-2 and parts of its coding exon region. 6 SNPs were selected, and there were no published studies regarding the association between these SNPs and the risk of LAA stroke in southern Chinese Han population. We proved that, after adjusted by gender and age, the SNP rs4789936 T allele and C/T+T/T under the dominant model were associated with the decreased risk of LAA stroke. In addition, we also observed a statistically significant association between the risk of LAA stroke and the distribution of genotypes of SNP rs2003241 by logistic regression analysis without adjustment of gender and age. Although this study might provide new insights to understand the association of TIMP-2 gene with LAA stroke, and contribute to the early detection of LAA stroke, these results await further confirmation by larger sample size studies.

A total of 250 unrelated LAA stroke patients and 250 healthy controls in a large cohort of southern Chinese Han population during 2016-2017 were recruited for this case-control study. The cases were recently diagnosed with LAA stroke for the first time, without any other severe diseases, treated at the Xiangya Haikou Hospital. LAA stroke was diagnosed according to TOAST (Trial of Org 10172 in Acute Stroke Treatment) criteria [5]. Control subjects without any clinical signs or medical history of any types of stroke, and without any other severe diseases, were selected from the health checkup center of the Xiangya Haikou Hospital. Blood samples were collected respectively at the time of initial diagnose, after giving an informed consent from all the participants. This study protocol was approved by the Human Research Ethics Committee of Xiangya Haikou Hospital.

Statistical analyses were carried out using Microsoft Excel and SPSS 17.0 (SPSS, Chicago, IL, USA) software. Deviation from Hardy-Weinberg equilibrium (HWE) was tested for control subjects to measure the distribution of the polymorphism using a Chi-square test [42]. The Haploview software package (version 4.2) and SHEsis software platform (http://analysis.bio-x.cn/myanalysis.php) were used for analyses of linkage disequilibrium, haplotype construction [43, 44]. Associations between haplotypes and LAA stroke risk were analyzed by SNPStats ( http://bioinfo.iconcologia.net/SNPstats) [45]. We used the unconditional logistic regression analysis adjusted by age and gender to determine the association between the haplotyes and LAA stroke. Two-sided P-value less than 0.05 was considered statistically significant. The risk associated with individual genotypes and allele was calculated as the odds ratios (OR) with their 95% confidence interval (95% CI) based on logistic regression models analysis.

We would like to thank all the patients and individuals in this study for their participation. We are also very grateful for the assistance of clinicians and all hospital staff of the Haikou Hospital of Xiangya Medical College of Central South University, who contributed blood samples and data for this study.

This work was supported by the key scientific and technological project of Hainan Province (Grant No.ZDXM20130066).