Timely restoration of coronary perfusion is the most effective strategy to limit infarction size (IS) and improve clinical outcomesin patients with ST-segment elevation acute myocardial infarction (STEMI) [1]. However, the progressive changes in structure and morphology of the left ventricle after ischemic myocardial reperfusion is associated with 25% of heart failure (HF) cases [2, 3]. Hence, accurate evaluation of the effects of STEMI therapy on cardiac structural pathology is critical [4].

Cardiac magnetic resonance imaging (cMRI) has emerged as the most accurate and reliable tool for the evaluation of cardiac structure. Moreover, contrast-enhanced cMRI has been widely used to measure the infarct size with high spatial resolution [17–19] .In addition toventricular dimensions and infarct size, cMRI simultaneously measures myocardial salvage index (MSI), microvascular obstruction (MVO), and myocardial edema todetermine area at risk (AAR) inhigh-quality cross-sectionalimages, therebyenabling accurate anatomicaldelineation [20]. cMRI detection has also been employed in clinical trials to determine the clinical utility of PoC in STEMI [21–24].Therefore, we conducted a comprehensive meta-analysis of clinical trials that have used cMRI to identify the potential benefits of LPoC and RPoC in STEMI patients. 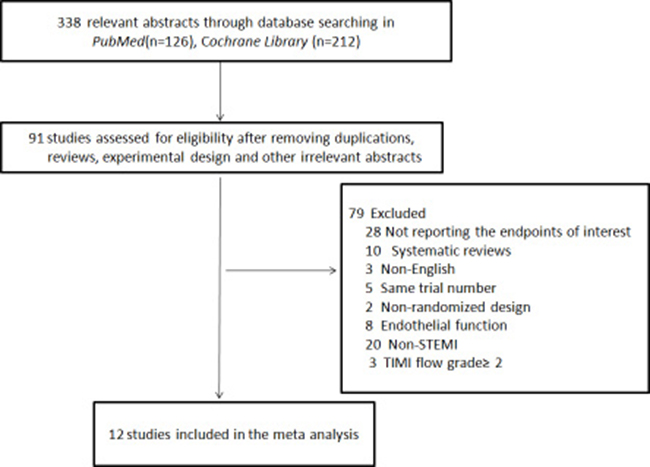 Effects of ischemic post conditioning on final IS, MSI, and myocardial edema 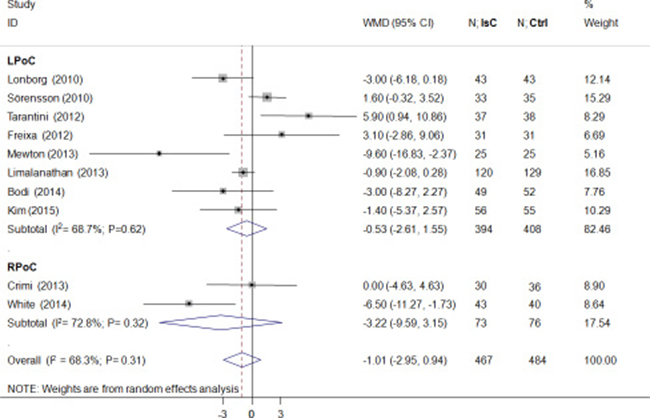 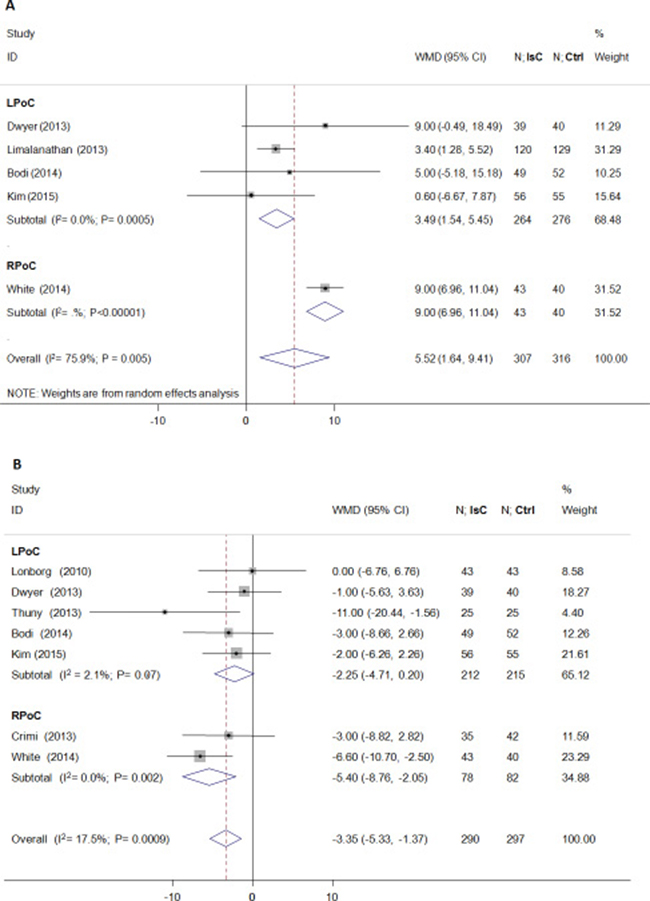 Effect of ischemic postconditioning on LV volume and microvascular obstruction 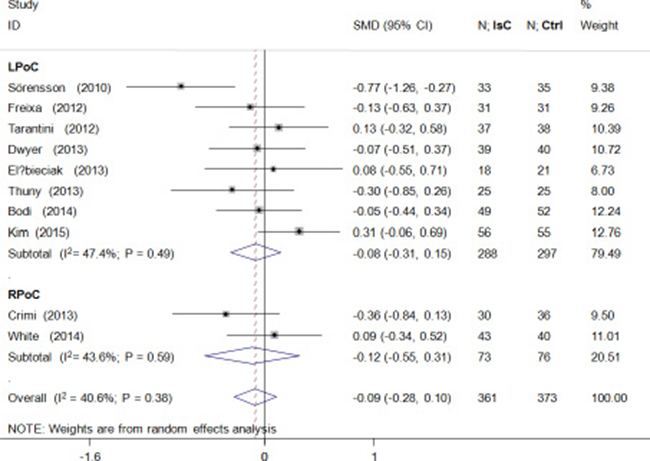 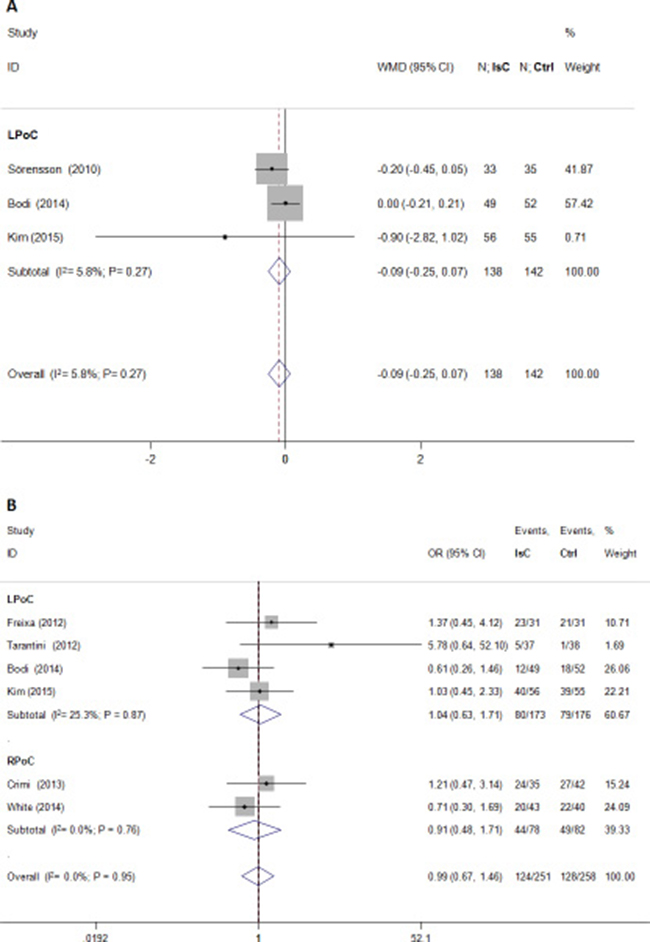 In this meta-analysis of 12 randomized trials, weassessed1069 STEMI patients that underwent PCI by cardiac magnetic resonance imaging(cMRI). We observed that both LPoC and/or RPoC reduced the extent of MSI and myocardial edema, thereby offering cardioprotection. However, LPoC and RPoC did not affect final IS, LV volume, and the incidence or the extent of MVO. This meta-analysis is the first comprehensive analysis to evaluate structural effects of ischemic postconditioning in STEMI patients using cMRI.

To address the effect of cardioprotective interventions on ischemia injury and myocardial edema, we selected T2 weighted cMRI, which is a water-sensitive technique that measures myocardial edema in vivo without using radiation or contrast agents and accurately represents the size of area at risk [35]. Our analysis showed that LPoC and RPoC decreased myocardial edema, but did not have any effect on the ischemia. The reasons for these effects are unclear. Myocardial edema includes intracellular and extracellular edema. However, cMRI could not distinguish between the two sources of extracellular edema, namely, intravascular water permeation and water release from necrotic cardiomyocytes into the infarcted area. Reperfusion-induced myocardial edema (extracellular space)increased wall thickness and stiffness favoring collagen deposition and fibrosis, which reduced expansion of the infracted area and left ventricular remodeling, regardless of myocardial salvage [36]. Moreover, recent studies using cMRI have demonstrated a bimodal pattern of myocardial edema after I/R injury, namely, an early phase that is reperfusion induced and occurs within 24 h and a late phase that represents the auto-healing process lasting at least 7days [37, 38]. However, the cMRI assessments were mainly performed within 1~7 days after PCI in the included trials. This suggested that ischemic postconditioning enhanced cardiomyocyte healing without affecting the infarction size. Previous studies have shown that LPoC and RPoC decreases inflammation and reactive oxygen species generation, which may prevent extracellular edema by increasing microvascular permeability [1, 39]. These studies partly explain the dissociation of the beneficial effects of ischemic postconditioning and structural damage in STEMI.

The main strength of our meta-analysis was that we assessed multiple structural parameterssuch as final IS, MSI, left ventricular volume, MVO, and myocardial edema in two settings of ischemic postconditioning namely, LPoC and RPoC using cMRIin STEMI patients. On the other hand, there were several limitations in our study. First, we included veryfew trials and studies and were unable to access individual patient data. Therefore,we may have underestimated the potential influence of comorbid conditions such as diabetes, dyslipidaemia, multi-vessel disease, and LAD as well as effects of cardiovascular medications such as β-blockers [40], glycoprotein IIb/IIIa inhibitors, and statins [10, 41]. Second, the relative small number of the enrolled subjects may have decreased the statistical power of our results. Third, we applied the random effect model based on I2 ≥ 50% and assumed normalized distribution [42]. But, we can’t rule out heterogeneity influencing the outcomes of our study. Fourth, we excluded non–English language publications .Fifth, more studies are necessary to assess thec MRI data regarding the effect of ischemic postconditioning on cardiac structurein AMI with baseline TIMI flow grade 2~3, especially for RPoC. Finally, the long-term heart failure and cardiac mortality needs to be analyzed and the effect of therapy on cardiac structure needs to be confirmed in future clinical trials.

In conclusion, our meta-analysis of cMRI data showed that both LPoC and/or RPoC reduced the extent of MSI and myocardial edema in STEMI patients. However, there were no improvements in final IS, LV volume, and the incidence or the extent of MVO.

We performed this meta-analysis in accordance with PRISMA (Preferred Reporting Items for Systematic reviews and Meta-Analyses) [43]. We searched PubMed, EMBase, and Cochrane Library databases up to May 2017 with the following keywords:ischemic postconditioning,remote ischemic conditioning, ischemic postconditioning, acute myocardial infarction and percutanenous coronary intervention. Only prospective RCTs that were published in English and that reported STEMI undergoing percutanenous coronary intervention were included in this meta-analysis. Studies those (1) reported only cardiac enzyme levels and/or left ventricular ejection fraction; (2) did not use cMRI for structural assessment and (3) used pre-procedural TIMI flow grade ≥ 2 for potential spontaneous reperfusion [44] were excluded.

Two investigators, Yadong Cui and Haiyang Gao, independently reviewed all abstracts and the full text according to the described search strategy and criteria. In case of disagreements, consensus was achieved by discussion. Quality assessment was performed according to the Jadad scoring system: randomization; blinding; withdrawals and dropouts. Each study obtained a score between 0 and 5 based on withdrawals and dropouts and those with a score ≥ 3 were considered high-quality [45].

Data was expressed as mean ± standard deviation or median ± interquartile range for continuous variables. We calculated WMD or SMD for LVR to obtain the pooled estimates with 95% confidence intervals (CIs). For dichotomous ones (reported with incidence), we calculated odds ratio (OR) with 95% CIs. We set I2 ≥ 50.0% as significant heterogeneity and used random-effects model for analyzing such parameters [48]. P < 0.05 (2-sided) was considered statistically significant. All statistical analysis was performed by Stata version 9.0(Stata Corporation, College Station, TX) and RevManversion 5.0(Cochrane Collaboration, Oxford, UK) softwares.

This work was supported by the Health Industry Special Scientific Research Project (NO.201402019).We are grateful to Dr. Yadong Cui and Dr. Haiyang Gao from Beijing hospital.