A novel prognostic nomogram predicting post-transplant pulmonary metastasis was established with a primary cohort of 308 HCC patients who received liver transplantation between 2007 and 2011 at Ren Ji Hospital. The C-indexes for predicting pulmonary metastasis was 0.85. The calibration curves fitted well between the predicted and actual outcomes. The decision curve analysis indicated that our nomogram was the optimal decision-making strategy for PM prediction compared to Milan, University of California San Franscisco, and up-to-seven criteria. These results were further validated by data from 103 patients who underwent liver transplantation between 2011 and 2012 at the same institution. In conclusion, our nomogram could be used as an effective tool to predict PM after liver transplantation.

Hepatocellular carcinoma (HCC) is the sixth most common cancer and a primary cause of cancer-related mortality [1]. Liver transplantation (LT) is an optimal therapy for liver cancer, because it can radically remove the primary tumor and treat underlying liver diseases, such as primary biliary cirrhosis (PBC) and hepatitis B virus (HBV)-associated cirrhosis. However, tumor recurrence after LT is frequently extrahepatic and could significantly influence the survival outcomes of patients. Pulmonary metastasis (PM) accounts for nearly half of all extrahepatic metastases after LT [2-4].

PM following curative LT for HCC indicates a poor prognosis. However, postoperative management of PM could significantly prolong patient survival. Several institutions have suggested that pneumonectomy for PM in patients with HCC following LT may improve long-term survival, but this procedure must be performed delicately in highly-selected patients, especially patients with maximum tumor size of the pulmonary metastasis < 33 cm [5-7]. Radiofrequency ablation (RFA) for lung metastasis of HCC was recently reported as a minimally invasive treatment with an effectiveness rate of 92% and improved survival rate [8, 9]. Jang et al. demonstrated that the application of conformal radiotherapy and tomotherapy, including helical tomotherapy, increased the partial/complete remission rate of PM [10]. Despite advances in the treatment of PM, approaches for accurate prediction of PM incidence after LT remain insufficient. Accurate identification of high-risk patients may lead to early detection of PM and prolong overall survival.

Precise prediction of postoperative PM is challenging due to the multitude of incidence factors. Existing clinical staging systems can be applied to predict PM development [11-13], but were not developed for this purpose. The nomogram is an established and accurate model for clinical prediction [14-16]. In this study, we developed a nomogram to predict the postoperative development of PM in patients with HCC.

Univariate and multivariate analyses demonstrated that preoperative serum AFP, vascular invasion, within or downstaged to Milan criteria, tumor diameter, tumor nodules, and tumor differentiation were found to be independent factors that influenced the incidence of PM (Table 3). These six variables were included in the nomogram (Figure 1). The model was accurate with a concordance index (C-index) of 0.85. The calibration plot indicated a strong correlation between actual PM probability and predicted PM probability (Figure 2A and 2B).

†Includes tumor within and downstaged to Milan criteria before Liver transplantation. 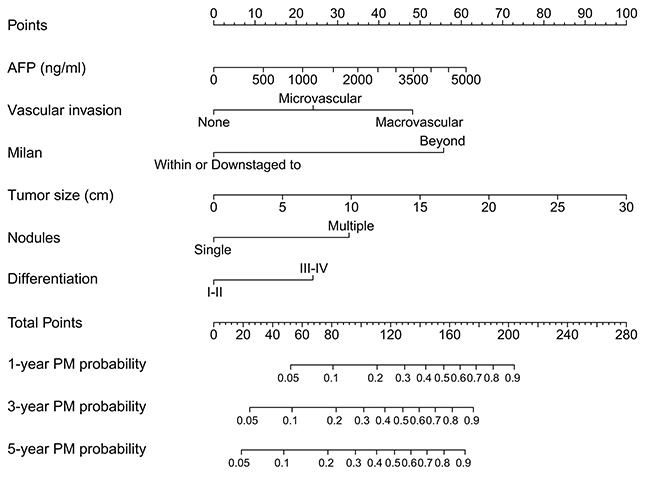 In our study, the nomogram demonstrates the highest curve compared to Milan, UCSF, and up-to seven criteria, revealing that it is the optimal decision-making strategy for PM prediction [11-13] (Figure 3).

Figure 3: DCA of nomogram and conventional criteria. The net benefits and the threshold probabilities are presented on Y-axis and X-axis, respectively. (A) Comparison within the primary cohort; (B) comparison within the validation cohort; horizontal black line, PM did not occur in any patients; gray line, all the patients developed PM.

Tumor recurrence is the representative indication of poor prognosis in patients with HCC. The lung is the most common site of metastasis after LT. Successful treatment of PM by pneumonectomy and adjuvant therapy could prolong long-term survival in HCC patients [5, 7, 17]. Our nomogram was developed from comprehensive clinicopathological characteristics based on serological examinations to accurately predict the development of PM after LT. Previous reports utilizing clinical stage systems focused on the tumor diameter and number, which are influential factors for predicting tumor recurrence [12, 13]. In addition to these two parameters, we included vascular invasion, histologic differentiation, the serum level of AFP, and tumor-downstaging to Milan criteria in our nomogram. Vascular invasion indicates that the malignancy has invaded blood vessels and represents the possibility of distant metastases. A majority of transplant centers included vascular invasion (macro- and microvascular) in their models to estimate OS or recurrence after LT [11, 18-19]. Histological differentiation is another critical factor in the prognosis of patients who received LT and considerable attention has been paid to its clinical application [20, 21]. Serum level of AFP is pivotal to the invasive/metastatic capacity of HCC cells and is directly associated with prognosis [22]. A recent study by Li et al. indicated that AFP levels were an independent factor that effectively predicted the occurrence of PM after hepatic resection [23]. Another study by Duvoux et al. demonstrated that the prediction of tumor recurrence was improved by including AFP level in the estimation model [24]. HCC exceeding the Milan criteria can now be downstaged before surgical operation. Improved tumor-free survival and OS has been reported in patients who received preoperative downstaging treatment and was comparable to survival outcomes of those within the Milan criteria [25, 26]. The presence of downstaging treatment was added to our nomogram.

Prediction models have become ubiquitous for OS and tumor recurrence prediction [15, 27, 28]. The nomogram is a statistical model designed to maximize predictive accuracy and is more effective than the other models for estimating multiple clinical end points [29, 30]. Our nomogram accurately predicted PM development (C-index = 0.85). DCA was used to evaluate the predictive performance of our nomogram because it is useful for assessing and comparing models that contain clinical consequences [31]. According to DCA, the nomogram is the optimal decision-making strategy compared to three well-known staging systems.

Several limitations existed: 1) as a single institutional study, large-scale randomized controlled studies are necessary to further validate this model before clinical approval; 2) the majority of our patients were HBV-associated (89.8%) or cirrhotic (86.9%), so the model might not be applicable to patients with other disease distributions; and 3) PM after LT was diagnosed by radiological imaging and serological examination. Although the incidence of primary lung cancer in patients with HCC is extremely low, the possibility could not be excluded entirely.

Our nomogram accurately predicted the development of PM in patients with HCC who received LT. Our results could be utilized to determine the risk index of PM in HCC patients for intensified surveillance and postoperative treatment.

Between January 2007 and January 2011, patients with HCC who underwent LT at the Ren Ji Hospital (Shanghai, China) composed the primary cohort. The patients who received LT for HCC from February 2007 to December 2011 formed the validation cohort. The data of both cohorts were collected prospectively and analyzed retrospectively. All the surgical procedures and postoperative immunosuppressive treatments were performed as described in our previous study [33]. Transplantation and organ donation in the study was carried out strictly in accordance with the regulations of the Shanghai Organ Transplant Committee and the Declaration of Helsinki. Ethical approval was obtained from the Committee of Ethics at Ren Ji Hospital. Informed consent was acquired before LT. All cadaveric donor tissues involved in the study were obtained from brain-dead or no-heart beating donors. This study was censored in March 2015.

Patients were observed monthly in the first 6 months after LT and once every 3 to 6 months thereafter. Routine abdominal ultrasound and chest radiography were performed at each follow-up visit. Other examinations included serum AFP, CA19-9, and liver function tests. When tumor recurrence was suspected, a chest CT scan and contrast-enhanced CT/MRI of the whole abdomen were performed. PM was diagnosed by the following criteria: (a) detection of growing lesions from dynamic chest CT scan and (b) elevated serum AFP level. Other pulmonary lesions were distinguished by a bronchial perfusate test and cytological examination of sputum. Patients who were diagnosed with PM before or simultaneously with extrapulmonary metastases were defined as our subjects.

Patients with solitary pulmonary metastasis were referred to thoracic surgeons for consideration of surgical resection. The criteria for surgical resection included the feasibility of complete removal of the lung lesion and sufficient pulmonary function after surgery. In PM patients with concurrent intrahepatic or other extrahepatic recurrence, lung resection performed after complete control of extrapulmonary metastasis. Systemic treatment with sorafenib or conventional chemotherapeutic (doxorubicin and cisplatin) was administered in patients with multifocal disease and unresectable lesions. All available treatment modalities including surgical resection, transarterial chemoembolization, radiofrequency ablation, radiotherapy, and chemotherapy were applied to the extrapulmonary metastases.

The statistical analysis was performed using R version 3.3.1 for Windows (http://www.r-project.org/) and SPSS 15.0 (SPSS, Chicago, IL). The endpoints of this study were the overall survival (OS), time to recurrence, and the time to PM. Treating extrapulmonary metastasis and death before PM as competing events, we performed a competing risk survival analysis to identify independent factors for PM. The nomogram was built based on these independent factors. The nomogram accuracy was evaluated by C-index and calibration curves. Bootstraps with 2,000 resamples were used to stabilize our results. A decision curve analysis (DCA) was utilized to evaluate the performance of our nomogram. The application and interpretation of this specific method are available online with a step-by-step tutorial [31, 34].

H.L. and W. P. equally contributed to this paper with conception and design of the study, H.L. and X.D., S.J. wrote the main text and analyzed the data, H.L. and F.M. acquired clinical data. H.L., S.J., X.D., F.M. and Z.J. contributed to critical revision and editing of the manuscript; and X.Q. coordinated the research and approved the final manuscript for publication. All authors reviewed the manuscript.

The authors declared that they have no conflicts of interest in this work.

This study was supported by the National Natural Science Foundation of China (No. 81472243), the Key Joint Research Program of Shanghai Health Bureau (2013ZYJB0001), and the Multicenter Clinical Research of Chinese Citizen Donation after Cardiac Death (15411950400).