Cervical carcinoma ranks the third most common cancer in young women worldwide. It is an important cause of cancer mortalities [1–3]. The application of HPV-based screening and combination therapy have improved the overall survival of cervical carcinoma [1–3]. Yet, for the patients with advanced, metastatic or recurrent cervical carcinoma, the prognosis is still extremely poor [4]. Groups all over the world are developing novel and molecule-based anti-cervical carcinoma agents [5, 6].

Sphingosine kinase (SphK) is a oncotarget protein for human cervical carcinoma [7] and many other malignancies [8]. SphK is critical for the balance of cellular sphingolipids [9–11]. SphK activation leads to production of sphingosine-1-phosphate (S1P), which is a well-known pro-cancerous lipid molecule. S1P promotes cell survival, cell growth and angiogenesis [12]. Inhibition, depletion or mutation of SphK shall cause production of pro-apoptotic sphingosine and ceramide [13]. Two SphK isoforms, SphK1 and SphK2, have been characterized [14]. The oncogenic function of SphK1 has been well-documented [15]. Literatures have also focused on the potential activity of SphK2 in human malignancies [16–21].

ABC294640 is a novel, specific and potent SphK2 small-molecule inhibitor [16, 17, 22, 23]. Preclinical cancer studies have demonstrated that ABC294640 could possibly inhibit growth of different cancer cells [20, 22, 24]. ABC294640 is a competitive SphK2 inhibitor, which displays chemotherapeutic efficacy in the in vivo cancer studies [20, 22, 24]. Currently, ABC294640 is under phase II clinical trials [22]. The potential anti-cancer activity of ABC294640 against human cervical carcinoma cells is tested here. 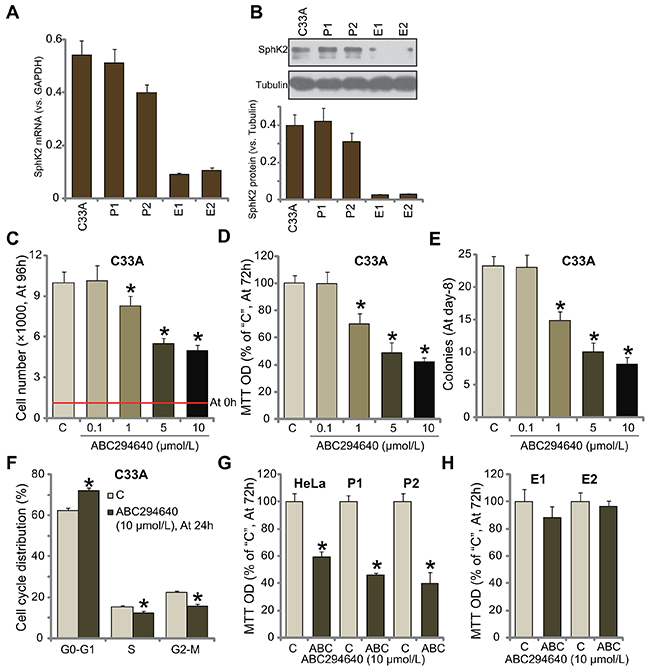 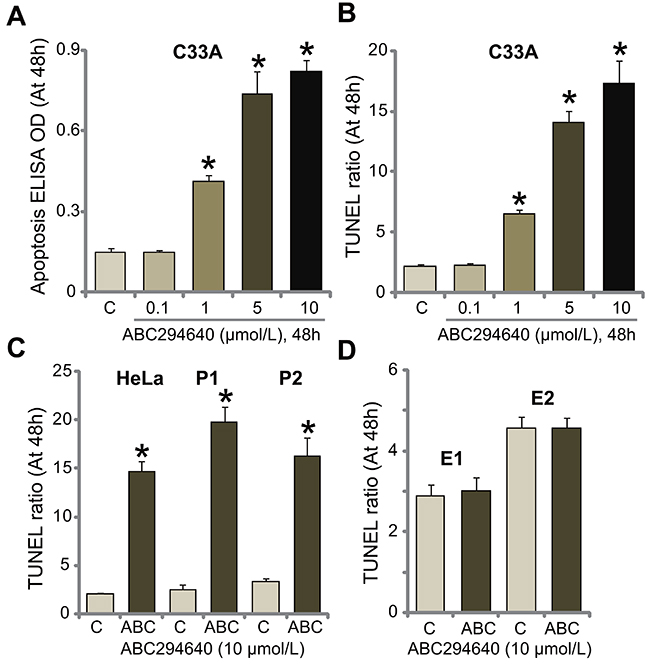 ABC294640 is the novel and specific SphK2 inhibitor [16, 17, 22, 23], the potential effect of ABC294640 on SphK activity was tested. Using the method described, we showed that treatment with ABC294640 at 1-10 μmol/L significantly inhibited SphK activity in C33A cells (Figure 3A). Consequently, cellular content of sphingosine-1-phosphate (S1P), the pro-cancerous sphingosine [12, 28], was reduced (Figure 3B). On the other hand, the level of pro-apoptotic ceramide was significantly increased (Figure 3C). ABC294640 displayed dose-dependent effect in inhibiting SphK in C33A cells (Figure 3A-3C). At a low concentration (0.1 μmol/L), ABC294640 failed to change SphK activation (Figure 3A) nor S1P/ceramide production (Figure 3B and 3C). 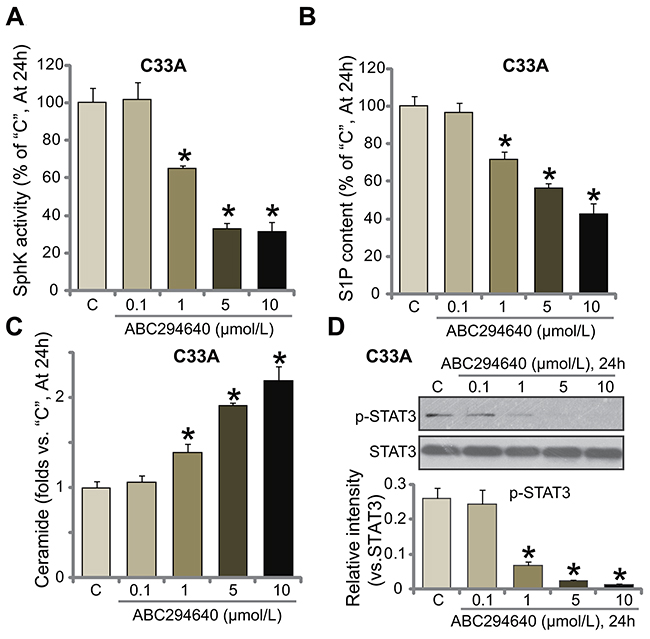 Figure 3: ABC294640 inactivates SphK and STAT3 in C33A cells. C33A cells were either left untreated (“C”) or treated with ABC294640 at designated concentrations (0.1-10 μmol/L), cells were further cultured for 24 hours; relative SphK activity (A), S1P content (B) and ceramide level (C) as well as STAT3 activation (D) were examined. p-STAT3 (vs. total STAT3) was quantified (D). Data were shown as mean (n=5) ± standard deviation (SD). *p<0.05 vs. “C” cells. Experiments in this figure were repeated three times, and similar results were obtained.

S1P could serve as a key upstream signal of STAT3 (signal transducer and activator of transcription 3) [29, 30], the latter is a key participant in cervical carcinoma progression [31, 32]. In the current study, we showed that STAT3 activation, tested by p-STAT3 at Tyr705, was largely inhibited in ABC294640-treated C33A cells (Figure 3D). Collectively, these results show that ABC294640 inactivates SphK and STAT3 in C33A cells.

Inhibition or silence of Bcl-2 sensitizes ABC294640 in C33A cells

One important objective of this study is to identify possible ABC294640’s resistance factors. We focused on Bcl-2. Bcl-2 is well-established anti-apoptosis protein [33–35. Bcl-2 has been recognized as a key chemo-resistance factor [33–35]. Third, Bcl-2 inhibition, mutation or depletion could significantly sensitize the anti-cancer activity by a number of molecule-targeted agents [36-40]. Bcl-2 pharmacological inhibitors were then applied, including the specific Bcl-2 inhibitor GDC-0199 (also known as ABT-199) [41, 42] and the pan Bcl-2 inhibitor ABT-737 [37, 40, 43]. As shown in Figure 4A, ABC294640 (5 μmol/L)-induced C33A cell growth inhibition (MTT OD reduction) was largely potentiated with co-treatment of the Bcl-2 inhibitors, which also dramatically facilitated ABC294640-induced cell apoptosis (TUNEL assay, Figure 4B). These results imply that Bcl-2 inhibition could possibly sensitize ABC294640 in C33A cells. 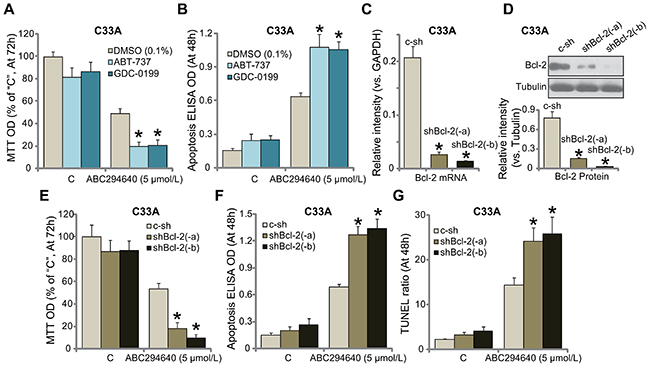 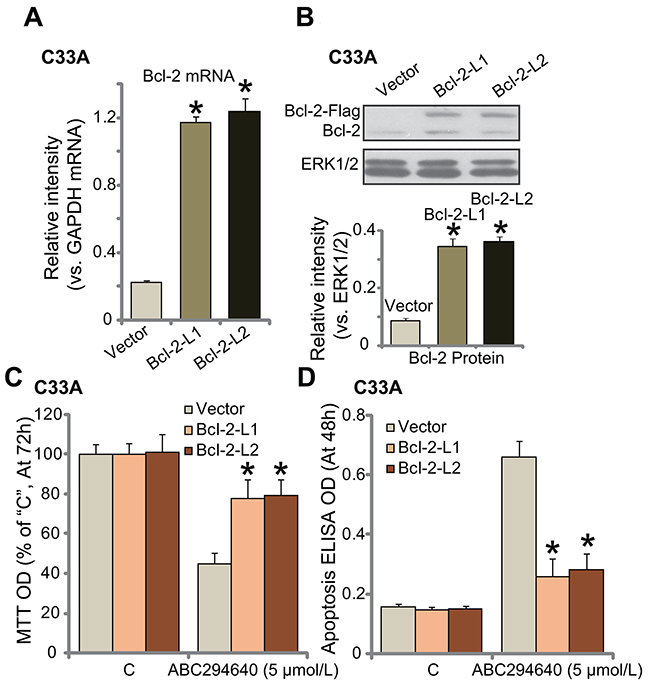 At last, the anti-cervical carcinoma activity of ABC294640 in vivo was tested. As described, C33A cells were s.c. injected to the nude mice. Within 2-3 weeks, when the tumors were established (with 100 mm3 in volume), mice were randomly assigned into four groups, with 10 mice per group. Tumor growth curve results in Figure 6A demonstrated that oral administration of ABC294640 (20 mg/kg, daily, p.o., for 21 days) [17] inhibited C33A tumor growth in mice. The tumor volumes in ABC294640-treated mice were significantly lower than those of vehicle control mice (Figure 6A). Remarkably, co-administration of the Bcl-2 inhibitor GDC-0199 (25 mg/kg, daily, i.p., for 21 days) [41, 42] strikingly potentiated the anti-cancer activity by ABC294640, leading to profound inhibition of C33A tumors (Figure 6A). The combined activity was dramatically more potent than ABC294640 single treatment in inhibiting C33A tumors (Figure 6A). The weight of tumors was also lowest in the combination treatment group (Figure 6B). Although, ABC294640 single treatment also decreased the weight of C33A tumors (At week-7, Figure 6B). Notably, treatment with GDC-0199 alone failed to induce significant inhibition on C33A tumor growth (Figure 6A and 6B). Mice body weight, the major indicator of animal health, was not significantly changed by the single or combined treatment (Figure 6C). We also failed to notice any signs of apparent toxicities during the experimental periods. Thus, these nude mice were obviously well-tolerated to the treatment regimens here.

Signal transducers and activators of transcription (STAT) transcription factor family proteins are vital in the regulation a number of key cancerous behaviors, including cell survival, growth, apoptosis-resistance, migration, and angiogenesis [44, 45]. Constitutively-activated STAT3 is often detected in cervical carcinoma, which is associated with tumorigenesis, cancer progression and poor prognosis [44, 45]. It has been previously shown that S1P is essential for production of NF-κB-regulated cytokine IL-6, and subsequent activation of STAT3 [29]. On the other hand, S1P depletion could significantly inhibit STAT3 activation. In the current study, we showed that ABC294640 inhibited SphK activity, causing S1P reduction and downstream STAT3 inactivation. This could be an important reason of the superior anti-cervical carcinoma activity by ABC294640. The underlying mechanisms of STAT3 inhibition by ABC294640 may warrant further investigations.

Another novel finding of this study is that Bcl-2 could be a major resistance factor of ABC294640 in cervical carcinoma cells. Pharmacological inhibition (by adding ABT-737 or GDC-0199) or silence of Bcl-2 sensitized ABC294640-induced anti-C33A cell activity. On the other hand, exogenous over-expression of Bcl-2 de-sensitized ABC294640 in C33A cells. In vivo, co-administration of the Bcl-2 inhibitor GDC-0199 significantly potentiated ABC294640-induced anti-C33A tumor activity in nude mice. Therefore, targeting Bcl-2 should sensitize ABC294640’s anti-cancer efficiency. Further studies will be needed to explore the mechanism of ABC294640’s resistance by Bcl-2. It will be interesting to test this theory in other cancer cells.

ABC294640 was provided by DC Chemicals (Shanghai, China). ABT-737 and GDC-0199 were obtained from Selleck (Shanghai, China). Puromycin was purchased from Sigma Aldrich (St. Louis, MO). The antibodies utilized in this study were from Cell Signaling Tech (Beverly, MA).

The established human cervical carcinoma cell lines, C33A and HeLa were provided by the Cell Bank of Shanghai Institute of Biological Science (Shanghai, China). Cells were maintained in the DMEM/F12 medium with 10% FBS. Two cervical carcinoma patients administrated at the Minhang Branch, Zhongshan Hospital were consent to provide the tissues. The cervical carcinoma and para-carcinoma epithelial tissues were obtained at the time of surgery. The tissues were separated carefully and were digested for 10 hours at 4°C in dispase. Tissues were cut into 1 mm2 pieces and digested in 0.25% trypsin for 15 min at 37°C. Trypsin was then neutralized by FBS (10%). The cells were collected by low speed centrifugation. Primary cancer cells were cultured in the DMEM plus 10% FBS medium. Cultures with 95% epithelial cells were maintained in keratinocyte serum-free medium (KSFM, Invitrogen, Carlsbad, CA). A total of two lines of primary human cervical carcinoma cells, namely “P1” and “P2”, as well as two lines of primary human cervical epithelial cells (“E1” and “E2”), were established. The protocols were approved by the Institutional Review Board and Ethics Committee of Fudan University, and experiments were conducted according to the principles of Declaration of Helsinki.

Cell growth was examined by routine 3-[4, 5-dimethylthiazol-2-yl]-2, 5 diphenyltetrazolium bromide (MTT) assay. Briefly, 5,000 cells per well were plated onto the 96-well plates. After the applied treatment, MTT (5 mg/mL, 20 μL per well, Sigma) was added to the medium for another 2-3 hours. Absorbance at 490 nm of MTT was measured by a microplate reader (Bio-Rad, Basel, Switzerland).

C33A cells were initially plated at 10,000 cells/well onto the six-well plate, and were treated with designated concentration of ABC294640. Cells were further incubated for another eight days. The number of colonies was then manually counted.

Following the ABC294640 treatment, cells were subjected to the TUNEL dye assay (Invitrogen). For each condition, at least 200 cells in five random views were counted. TUNEL percentage (vs. total cell number) was recorded.

Lysate proteins were separated by 8-12% of SDS-PAGE gels, which were then transferred to PVDF blots (Millipore, Wuxi, China). After blocked in 10% milk, the blots were incubated with the designated primary and corresponding secondary antibodies. The protein signals were visualized via the ECL detection kit. Quantification of the signal was performed via the Image J software.

The Bcl-2 expression vector was a gift from Dr. Sun [38]. The construct was transfected to C33A cells via the routine Lipofectamine 2000 protocol [46]. Puromycin (2.5 μg/mL, Sigma) was added again to select stable cells for another 8-12 days. Two stable C33A cell lines with the construct were established. Bcl-2 expression (endogenous and exogenous) in the stable cells was verified by qRT-PCR assay and Western blotting assay.

Following the indicated ABC294640 treatment, 20 μg protein lysates (per treatment) were incubated with D-erythrosphingosine (5 μmol/L, dissolved in 0.1% Triton X-100, 2 mmol/L ATP, and [γ-32P] ATP) [17]. HCl (1 N) was added to stop the reaction, followed by adding 800 μL of chloroform/methanol/HCl (100:200:1, v/v). After vortex, phases were separated by centrifugation. Radio-labeled S1P was separated by 60 thin-layer chromatography (TLC) on silica gel G60-plates with the described solvent, and phosphate incorporation was visualized and quantified via the scintillation counter (LS-6500, Beckman, Shanghai, China) [51]. The SphK activity was valued as pmol/hour/g protein, which was always normalized to that of control group.

Autoradiography detection of cellular ceramide content was described in detail in previous studies [52, 53]. Ceramide content in the treatment group was always normalized to the control level.

All animal protocols in the study were approved by Fudan University’s Ethics Board. Animals were provided by the Animal Center of Fudan University (Shanghai, China) and were maintained in routine conditions. The female nude mice (6-8 weeks age, 17.5-18.8 g weight) were subcutaneously (s.c.) inoculated with 5 × 106 C33A cells (per mouse, in 0.2 mL DMEM/10 % FBS) into the right flanks. When C33A xenograft volumes reached around 100 mm3, mice were randomized into four groups, which were treated as describe in the text. The xenografted tumor volumes along with mice body weights were recorded every week for a total of six weeks. At the end of experiment (week-7), tumors of each group were isolated and weighted.

The listed authors have no conflict of interests.