Background: Stroke is an extremely complicated disease caused by multiple factors. Epidemiological studies have shown that genetic factors contribute to the pathogenesis of stroke. There is still little research on the effect of ApoB gene on stroke in Chinese Han population. The purpose of our research was to explore the effect of ApoB gene polymorphism on the genetic susceptibility to Ischemic Stroke in Chinese Han male population.

Materials and methods: 7 polymorphisms in ApoB gene were selected and genotyped using Sequenom MassARRAY in 325 ischemic stroke male patients and 399 healthy male controls in Chinese Han population. The association between ApoB gene and genetic susceptibility to Ischemic Stroke was performed by the χ2 test, genetic model analysis and haplotype analysis.

Conclusion: The polymorphisms of the ApoB gene may affect Ischemic Stroke occurrence.

Strokes are one of the three most common causes of death and the major cause of adult chronic disability. A stroke is a sudden onset of cerebral blood circulation disruption. Once a stroke has occurred, most affected individuals suffer from disability, cognitive dysfunction and other complications and have a higher risk of death. About 15 million people suffer from strokes for the first time each year, of which 1/3, or about 6.6 million, result in death [1]. Risk factors for coronary artery disease (CAD) and ischemic stroke include hypertension, diabetes, dyslipidemia, and metabolic syndrome [2]. Dyslipidemia, i.e., elevated levels of total cholesterol, triglycerides, low-density lipoprotein and lipoprotein, and a decrease in HDL levels are risk factors for stroke [3, 4]. At present, more and more attention has been paid to the genetic factors of Ischemic Stroke.

The ApoB gene is located on the short arm of human chromosome 2, with a length of 43kb. The expression products of ApoB gene are mainly divided into Apo B100 and Apo B48. Apo B100 is a regulatory factor involved in thrombosis. Apo B48 participates in the synthesis, assembly and secretion of VLDL and participates in the digestion, absorption and transportation of exogenous lipids. One research consisted of 1128 people, and revealed that ApoB rs1042034 loci was significant associated with plasma cholesterol [5]. Another study found that oxLDL influence the incidence of stroke [6], and rs676210 in ApoB gene associated with oxLDL [7], so rs676210 loci may affect the incidence risk of stroke. Two small case-control studies [8, 9] and a small cohort study of patients with Ischemic stroke found that elevated apoB was associated with an increased risk Ischemic stroke [10].

However, there is little research on the relationship between ApoB gene and ischemic stroke in Chinese people. So, the purpose of our research was to explore the effect of ApoB gene polymorphism on the genetic susceptibility to Ischemic Stroke in Chinese Han male population.

A/B stands for minor/major alleles on the control sample frequencies.

Table 2: Association of APOB SNPs with Ischemic Stroke risk based on logistical tests

The linkage disequilibrium degree between two SNP loci was measured by the parameter D’ and R2, and the haplotype block was divided by D’ confidence interval method. Figure 1 shown that rs1042034, rs693, and rs673548 are highly linked, and further haplotype analysis revealed that haplotype “TAG” increased the risk of Ischemic stroke compared the haplotype “CGA” (OR=1.52, 95%CI: 1.02-2.27, p=0.0042) (Table 3). 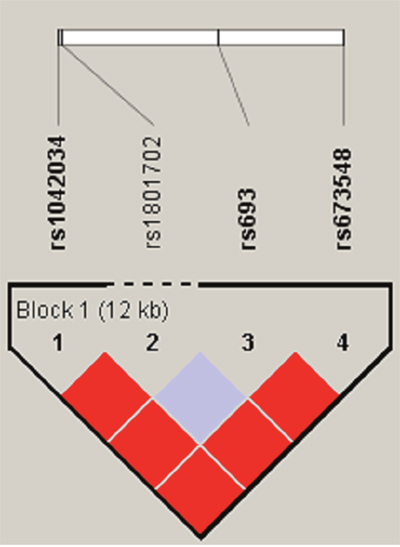 Figure 1: Haplotype block for the SNPs of ApoB.

Table 3: ApoB haplotype frequencies and their association with Ischemic Stroke

The AP69 gene rs693 loci (C> T, synonymous mutation) is located in exon 26 of the ApoB gene, closely related to blood lipid level. Kathiresan and his colleagues found that the levels of LDL-C and TG of the rs693 T allele carriers were higher than the rs693 C allele carriers [11]. Rodrigues et al. found that rs693 locus T allele carriers had higher levels of TC and LDL-C by case-control analysis [12]. Boekholdt et al. [13] found that Homozygotes for the XbaI elevated levels of LDL cholesterol (LDL-C) and apoB, but decreased the risk of ischemic heart disease. In our data, rs673548 also showed significant associations with Ischemic Stroke risk, and rs693 and rs673548 have stronger linkage.

We also found that ApoB rs1042034, a missense resulting in Ser4338Asn, increased the risk of Ischemic stroke, the odds of having Ischemic Stroke would be 1.28-fold with the variant allele. In the study of Kim, which including 1128 participants, revealed that ApoB rs1042034 loci was significant associated with plasma cholesterol [5]. Kulminski AM et al. tracing the cardiovascular disease in the United States found that the rs1042034 “CC” genotype of ApoB gene is related to the increase of serum total cholesterol in young population, but the protective effect on lipid metabolism in elderly people [14]. So, we speculate that ApoB influences the risk of occurrence of Ischemic Stroke by influencing the concentration of lipoprotein.

In conclusion, our study revealed that ApoB rs1042034, rs693 and rs673548 mutation were significantly associations with the hereditary susceptibility of Ischemic stroke. Although sample size is small, our research has certain significance. In the future we will increase the sample size for validation studies.

A case-control study involving a Chinese study population of 325 ischemic stroke male patients (age mean: 63.44 year) and 399 healthy male controls (age mean: 47.57 year) was conducted at the Affiliated Haikou Hospital at Xiangya medical college, Central South University. All included patients were diagnosed according to the International Classification of Disease (9th revision, codes 430 to 438) on the basis of history, clinical symptoms, physical examination, and cranial computed tomography (CT) or magnetic resonance imaging (MRI). Patients with hemorrhagic stroke, subarachnoid hemorrhage, transient ischemic attack, traumatic brain injuries, infectious diseases, and tumors were excluded in this study. The controls were recruited from the Physical Examination Department in the same hospital. None of the controls showed evidence of stroke or other neurological diseases. Control participants with tumors, autoimmune diseases, liver ailments, nephrosis, or hematological diseases were excluded.

All of the participants signed an informed consent agreement. The Human Research Committee for Approval of Research Involving Human Subjects, Affiliated Haikou Hospital at Xiangya medical college, Central South University approved the use of human tissue in this study.

This work is supported by the key scientific and technological project of Hainan Province (No. ZDXM20130066). We are grateful to Dr. Ying Xia and Dr. Tianbo Jin for their advice on experimental design. We are grateful to all the patients and individuals in the study who made this work possible. We would also like to thank the clinicians and hospital staffs who contributed to data collection for this study.

10. Simons LA, Simons J, Friedlander Y, McCallum J. Cholesterol and other lipids predict coronary heart disease and ischaemic stroke in the elderly, but only in those below 70 years. Atherosclerosis. 2001; 159:201-208.