As a life-threatening malignancy, advanced-stage non-small-cell lung cancer (NSCLC) is responsible for 17% of the total new cancer cases and 23% of the total cancer deaths, and accounts for approximately 87% of lung cancer cases [1]. Adenocarcinoma (AdC) is the most frequent subtype and rates continue to increase in most populations [2]. There exists broad evidence base supporting the administration of platinum-based combination chemotherapy has been a first-line treatment for advanced NSCLC for years [3, 4]. However, platinum-based chemotherapy leads to more gastrointestinal, neuro- or nephrotoxicity, while bone marrow toxicity is more common with carboplatin [5]. Pemetrexed, a treatment option for patients with advanced non-squamous NSCLC, had no significant differences in efficacy and safety compared with other chemotherapy options in second line treatment. It should be reasonable to optimize its use, since pemetrexed is relatively less toxic and currently used as continuation maintenance therapy for longer period, and the high budgetary impact of its incorporation into health system is of concern. Thus, optimum regimen of pemetrexed in the treatment of NSCLC should be investigated [6].

For patients with lung AdC harbouring activating epidermal growth factor receptor (EGFR) mutations, EGFR-tyrosine kinase inhibitors (EGFR-TKIs) has become the most effective first-line treatment. However, EGFR-TKI monotherapy is limited and further investigation to prolong the progression-free survival (PFS) is urgently needed. A Phase II clinical trial demonstrated that combination of pemetrexed and gefitinib was more prominent in improving PFS compared with gefitinib alone in patients with advanced nonsquamous NSCLC and activating EGFR mutations [7]. Pemetrexed was sequentially administered with gefitinib was proved to prolong a significant PFS and could be well-tolerated in advanced NSCLC patients with activation EGFR mutations [8]. In addition, a published trial conducted by Yi-Long Wu [9] confirmed that sequence of paclitaxel followed by gefitinib was an appropriate treatment regimen for AdC patients with activating EGFR mutation, indicating that the sequence of chemotherapy plus EGFR-TKIs might improve their efficacy. Although the combination of EGFR-TKIs and chemotherapy is a promising method for treating advanced AdC, the cell cycle-associated antagonistic effect is observed between EGFR-TKIs and chemotherapy [10]. It is largely due to inappropriate drug administration sequences for the negative benefits. Therefore, there is a pressing need to develop effective and viable therapeutic strategies to enhance the anti-tumor activity and prolong the survival time.

In the present study, we therefore selected the lung AdC A549 (wild-type), HCC827 (EGFR exon19 deletions), and H1975 (EGFR T790M) to investigate the treatment effects of pemetrexed, icotinib and erlotinib in different sequential schedules on cell growth proliferation, apoptosis and cell cycle distribution. Our findings may provide a meaningful insight to clinical medication.

Table 1: IC50 values for each drug were calculated by performing dose-response experiments with pemetrexed, icotinib and erlotinib

Effects of pemetrexed, icotinib and erlotinib on cell viability 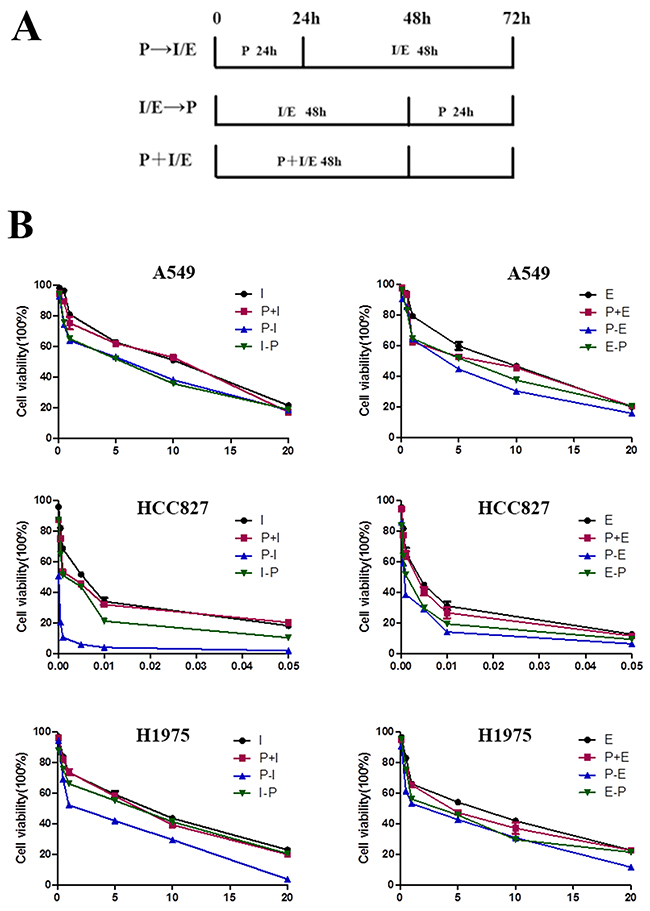 Effects of pemetrexed, icotinib and erlotinib on cell apoptosis 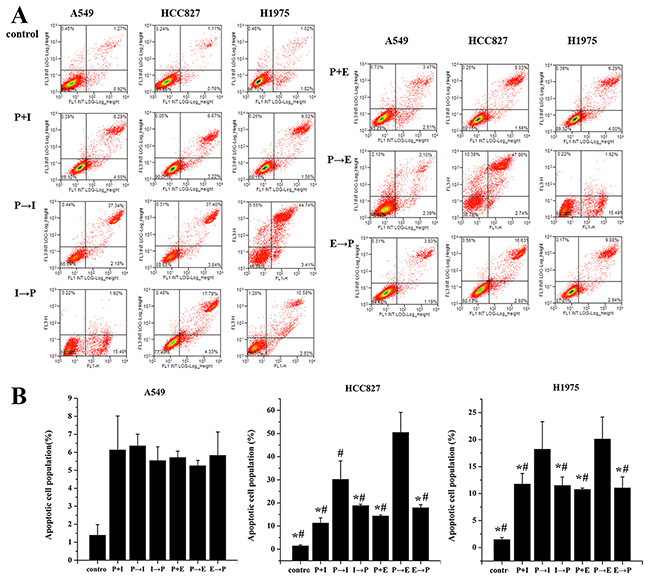 Effects of pemetrexed, icotinib and erlotinib on the cell cycle distribution

EGFR-TKI combined with chemotherapy as a new strategy has become a hot research topic in the treatment of lung cancer [11, 12]. Recently, sequential regimens have attracted more interests in NSCLC researches. Fiala O et al [13] evaluated the effect of second-line pemetrexed with third-line erlotinib on advanced-stage (IIIB/IV) lung cancer with wild-type EGFR gene, indicating significant improvement of both PFS and overall survival for patients sequentially treated with erlotinib and pemetrexed compared with the pemetrexed-erlotinib sequence. A clinical retrospective study carried out by Zheng Y et al [14] demonstrated that the sequence of first-line pemetrexed followed by icotinib is promising for advanced lung cancer harboring unknown EGFR gene in China. These studies support the use of EGFR-TKIs in the second-line setting in advanced lung AdC. In the present study, sequential therapy of pemetrexed followed by icotinib/erlotinib leads to a synergistic effect on HCC827 and H1975 cell lines which is comparable to the reverse sequence of icotinib or erlotinib followed by pemetrexed.

As indicated in clinical practice, the EGFR-TKIs are recommended as first-line regimen in patients with advanced lung AdC harboring EGFR mutations. However, IPASS [15] and OPTIMAL [16] clinical trials suggested that patients with NSCLC received EGFR-TKIs alone failed to prolonged progression-free survival (PFS), and showed secondary resistance after 10-13 months in 10-13 months with objective response rate (ORR) of 43% in IPASS and 83% in OPTIMAL. In order to improve the PFS and the efficacy, JMIT study of Cheng Y found that gefitinib synchronized with pemetrexed could significantly extend PFS [7]. The FASTACT-2 study, presented by Professor Yilong Wu, showed that alternative therapy of chemotherapy and erlotinib obviously prolonged PFS and OS in patients with advanced NSCLC, especially in patients with EGFR mutations, PFS could be up to 16.8 months [17]. While, H Yan et al [18] demonstrated that concurrent chemotherapy with EGFR-TKIs was not superior to single chemotherapy or EGFR targeted therapy.

The antagonistic action between EGFR-TKI and chemotherapy seems most likely to contribute to explain these negative results. Mahaffey C M [19] performed the sequence of docetaxel followed by erlotinib in A549 and Calu-1 cell lines. The significantly enhanced apoptosis was observed compared with the reverse sequence of erlotinib followed by docetaxel, thus they hypothesized there was a negative interaction between chemotherapy and EGFR TKIs, and cell cycle arrest induced by erlotinib in the presence of wild-type EGFR accounts for the lack of benefit. An in vitro study performed by Cheng H et al [20] investigating differential effects of various sequences of paclitaxel with gefitinib on lung cancer cell lines with activating EGFR mutation, revealed that the sequence of paclitaxel followed by gefitinib arrested cells in G1, whereas the reverse sequence arrested cells in S and G2 phases. Moreover, it was reported that a pretreatment with EGFR-TKIs caused G1 arrest and effectively inhibited the activity of chemotherapy, resulting in decreased cytotoxicity and apoptosis [20, 21]. In the present study, single-agent icotinib/erlotinib caused accumulation of cells in G1 phase, while the reduction of G1 phase and enhanced apoptosis were observed in the sequence of pemetrexed followed by icotinib/erlotinib.

This study also has some limitations. Preliminarily, the study was only conducted in vitro without further confirmation, thus further evidences are needed to be provided by more in vivo experiments or clinical researches. In addition, more studies still need to enrich the mechanisms underlying the antagonistic interaction of these drugs.

To conclude, the present study revealed that the optimal schedule for lung AdC treatment in vitro was the sequence of pemetrexed followed by icotinib/erlotinib. These results may provide a rationale and promising strategy for the ongoing clinical investigation of the sequential treatment in patients with lung AdC.

Evaluation of cell viability by CCK-8

The CCK-8 assay (Best Bio, Shanghai, China) was applied to evaluate the cell viability. Cells were implanted 8,000/well in 96-well plates for 24h. To evaluate the effects of single medication, the cells were exposed to icotinib, erlotinib or pemetrexed alone for 72h. To determine the antiproliferative efficacy of the combined treatment, three different sequences were performed as following: 1) Pretreated with icotinib/erlotinib for 48h subsequently treated with pemetrexed for 24h; 2) Preprocessed with pemetrexed for 24h followed by icotinib/erlotinib for 48h; 3) Treated icotinib/erlotinib simultaneously with pemetrexed for 48h, and incubated in drug-free medium for 24h. After 72h drug administration, the cells were incubated with 25 μl CCK-8 (5 mg/ml) after PBS washing at 37°C for 4h. Cell viability was detected at 570 nm. Measurements were carried out on at least 3 different spots. The half maximal inhibitory concentration (IC50) was determined at a concentration of 50% cell growth inhibition compared with the untreated control cells.

Cells were planted in 6-well plates with a density of 2x105/well. Then cells were trypsinized to analyze the cell apoptosis after the drug administration. 400 μl AnnexinV suspension cells were added into the cells and washed with cold PBS. Annexin V-fluorescein isothiocyanate (FITC) and 5 μl PI (Joincare Medicine Company, Zhuhai, Guangdong, China) were used for staining for 15 min at 37°C in the dark and analyzed using a FACSCalibur flow cytometer (Becton Dickinson and company, San Jose, CA).

Cells were treated with icotinib, erlotinib and pemetrexed sequentially after culturing with 0.1 FBS for 24h. Cells were trypsinized, fixed with 70% ice-cold ethanol for 2h, then were harvested by centrifugation, washed once with cold PBS, stained with 20 μl Rnase at 37 °C and 400 μl propidium iodide (PI) at 4 °C for 30 min in dark. Analysis of cell cycle was performed by flow cytometer.

SPSS 19.0 software (SPSS, Chicago, USA) was used to all statistical analysis. Data are expressed as the means ±SD. The statistical analyses between groups were performed using one-way ANOVA test. The significance level was set at α = 0.05.

There is no any potential conflicts of interest.