*The authors contributed equally to the work

Tonsillectomy is known to be one of the most common and severely painful surgeries that children undergo1 [1]. It is conducted inside the oral cavity, and strict anesthesia requirements are needed to eliminate undesirable reflection phenomenon occurring during surgery since it easily leads to throat irritation [2]. In addition, it is conducive to post-operative recovery to maintain stable vital signs in children during surgery since the operation time is short [3]. The tonsils are rich in blood and large amounts of secretions, so more attention should be paid to anesthesia to avoid accidental inhalation during surgery [4]. With recent advancements in anesthetic and surgical techniques, tonsillectomy has become safer than in older times. The 2 main narcotic drugs are propofol and remifentanil [5]. Both are ultra-short-acting opioids that have less impact on post-operative recovery and are considered safe [6]. However, studies have shown that nausea, vomiting, muscle stiffness and dose-dependent heart rate (HR) increase and systolic blood pressure decreases after anesthesia, and increased post-operative analgesia is needed because of acute opioid tolerance [7]. MDR1 encodes a 170-kDa transmembrane protein, P-glycoprotein (P-gp). P-gp is an efflux pump for a variety of lipophilic compounds. [8, 9]. MDR1 is expressed in many tissues [10], and many single-nucleotide polymorphisms (SNPs) have been identified in the exons of MDR1. Among these SNPs, 1236C > T, 2677G > T/A, and 3435C > T in MDR1 are the main variants that have been investigated [11]. Our study aims to investigate the role of the MDR1 gene polymorphisms 1236C > T, 2677G > T/A, and 3435C > T in the anesthetic effects of propofol combined with remifentanil. We hope to provide knowledge for better anesthetic effects in pediatric tonsillectomy.

Table 1: Comparison of gene frequencies between each loci of MDR1 gene 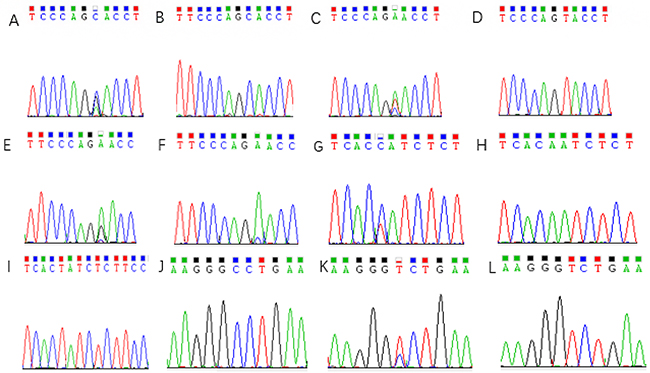 Effect of MDR1 gene polymorphisms on anesthesia induction and restoration

Effect of MDR1 gene polymorphisms on hemodynamics after extubation

Compared to VAS at 1 hour post-operation, all the mutations of the genotype of children with post-operative VAS showed a downward trend. There was no significant difference revealed between MDR1 3435C > T CC and CT + TT genotypes in terms of VAS at each time point (all P >0.05). Additionally, there was no significant difference observed among the different genotypes on MDR1 2677G > T/A (all P >0.05). Compared to the MDR1 1236C > T CC genotype, a significantly higher VAS was indicated in children who had the CT + TT genotype at 1, 2, 4, and 8 hours post-operation (all P <0.05), as demonstrated in Table 4.

As shown in Table 6, there was no significant difference between MDR1 3435C > T CC and CT + TT genotypes regarding the Ramsay sedation scores and FLACC scores after extubation for 5, 10, and 30 minutes (all P >0.05). No significant differences were observed among different genotypes on MDR1 2677G > T/A (all P >0.05). Compared to the MDR1 1236C > T CT + TT genotype, Ramsay scores at the 3 time points were reduced in children with the CC genotype, while FLACC scores were found to be higher (all P <0.05), as demonstrated in Table 5.

Tonsil hypertrophy is a common pediatric disease. It may cause airway obstruction, which can affect sleep quality in children and promote the accumulation of CO2 in the lungs, possibly resulting in mental development abnormalities. Tonsillectomy is a common surgical procedure for tonsil hypertrophy [14, 15]. Tonsillectomy is performed inside the oral cavity; strict anesthesia requirements are needed since it can easily lead to throat irritation, and children often have a low degree of coordination during the surgery. To prevent adverse events during surgery, safe and effective anesthesia is of great significance not only for the operation but also for post-operative recovery [16, 17].

Recently, it was showndrug anesthetic or analgesic effect varies because of gene polymorphism [18, 19]. MDR1 is an important transporter that can constrain the accumulation of chemotherapeutic drugs [20]. The role of the 1236C > T, 2677G > T/A, and 3435C > T MDR1 gene polymorphisms on the anesthetic effects of the drug propofol combined with remifentanil was investigated in our study. The results we obtained revealed that the 1236C > T SNP contributed to individual variation in anesthetic effects following pediatric tonsillectomy. We determined that the patients with the MDR1 1236C > T CC genotype displayed superior anesthetic effects compared to patients with the CT + TT genotype. Takashina et al [21] study showed that MDR1 gene 1236C> T polymorphism can change remifentanil analgesic effect during the treatment of cancer pain, and found that patients of CC genotype have better results, which is consistent with our study. Analysis of the reasons may be due to patients of TT genotype need the largest dose of remifentanil and propofol, for they may accumulated in liver cells due to the decreased transport function of P-gp in patients of TT genotype, remifentanil and propofol are metabolized in the liver, resulting in increased dose of the drug needs.

We sought the cause and found that a critical impact on the therapeutic efficacy and the pharmacokinetics of drugs are varied in alterations in the expression and the activity of MDR1-encoded P-gp. Because of this, P-gp levels can influence the entrance of drugs into the cells. [29] Evidence suggests that elevated levels and enhanced activity of P-gp are conferred more by the CC genotype, while individuals with the TT genotype seem to have decreased P-gp activity. [30] Studies have found that genetic causes of MDR1 for the anesthetic effects are varied. MDR1 genetic variants rs12720464 and rs1055302 account for the individual variation of time of action in patients undergoing anesthesia with a single dose of rocuronium. Another study indicates that children who possess GG and GA genotypes of MDR1 rs9282564 present higher risks of opioid-related respiratory depression that lead to prolonged hospitalization. The minor allele (G) elevates the odds of a prolonged stay due to post-operative respiratory depression [31]. The experiment by Sia et al connects MDR1 1236C > T, 2677G > T/A, and 3435C > T to chronic pain in women receiving spinal anesthesia with intrathecal morphine for elective cesarean section. They revealed no significant difference in the total consumption of morphine, side effects, and pain scores among different genotypes. Women with the 3435C > T allele demonstrated a higher risk of suffering persistent post-operative pain [32]. Farhat et al’s [33] experiment indicated that managing nausea and vomiting during intravenous administration of ondansetron are all related to the MDR1 2677G > T/A TT genotype, which is similar to our findings. Our study confirmed that there is no significant association between the SNPs 2677G > T/A and 3435C > T that change anesthesia induction, emergence from anesthesia, hemodynamic changes, pain assessment, or adverse reactions.

However, the statistical analysis may have some limitations due to the small sample size, and it is necessary to enlarge the sample size in further study, such as increasing the number of genotypes samples. In addition, due to the limited number of samples, this study did not distinguish children from different ethnic groups, which is also need to analysis in the next study.

In conclusion, it can be said that our study gives evidence that the MDR1 SNP 1236C > T is partly the reason for single differences in the anesthetic effects that follow pediatric tonsillectomy. Additionally, children who possess the MDR1 1236C > T CC genotype were shown to have superior anesthetic effects in terms of anesthetic induction and restoration, hemodynamic changes, pain and sedation assessment compared to children who possess the CT + TT genotype.

Since the time and budget were limited, it was impossible to conduct the experiments in a larger population. In addition, we believe that further analysis of interactions between varieties of gene polymorphisms in populations from different regions and of different races in China would be significant and warrants in further study.

Two hundred and forty children, including 142 males and 98 females, received tonsillectomy with general propofol–remifentanil anesthesia at Zhejiang provincial people’s hospital from August 2012 to September 2016. All the children recruited for this study were between the ages of 3 and 12 years with a mean age of 7.0 5± 2.30 years, and they weighed between 13 and 45 kg. The mean time to complete the operation was 44.85±8.15 minutes. The involvement criteria for eligible patients were as follows: people who underwent post-operative analgesia voluntarily and people who had no allergy history to any kind of anesthetic drugs or no operation contraindication. The non-involvement criteria for non-eligible patients were as follows: heart block or cardiac abnormalities, liver or renal dysfunction, drug abuse history, and allergy to any kind of drug used in this study. This experiment was approved by the Ethics Committee of Zhejiang provincial people’s hospital. Informed consent for anesthesia was obtained from the parents or legal guardians.

All children were anesthetized with intravenous 0.1 mg / kg dexamethasone and 0.01 mg / kg scopolamine. Target-controlled infusion pump induction of anesthesia was activated. Remifentanil (Yichang people Fook Pharmaceutical Co., Ltd., batch number: 20140197) and propofol (Sichuan Guorui Pharmaceutical Limited liability company, batch number: 20150824) initial doses were set at 2.5 μg / L and 2.5 mg / L, respectively, after imputing parameters such as the child’s weight, age and others. Intravenous infusion of 0.1 mg / kg vecuronium by endotracheal intubation then followed. The bispectral index was maintained at 45-55 during surgery. The propofol concentration was adjusted at any time to maintain the mean arterial pressure (MAP) at 60 ~ 90 mmHg and the heart rate at 80 ~ 120 beats / min. The remifentanil concentration was adjusted to maintain the stability of anesthesia, and vecuronium was used as appropriate. Remifentanil infusion was ceased at the end of the surgery and propofol infusion stopped 5 minutes after the surgery. The ventilator was cleared when children began to breathe, cough, and swallow normally. The patient was transferred to the observation room at 5 minutes after the oxygen supply stopped, and the percutaneous oxygen saturation (SPO2) stabilized at approximately 95%.

Analgesia and adverse reaction observation: At 1, 2, 4, and 8 hours post-operation, the visual analog scale (VAS) was recorded [12]. The Ramsay sedation score was assessed at 5, 15, and 30 minutes after extubation: 1 point for anxiousness or restlessness; 2 points for cooperativeness and tranquility; 3 points for responding to commands with unclear murmurs; 4 points for drowsiness and brisk response to calling; 5 points for drowsiness and sluggish response to calling; and 6 points for deep sleep or anesthesia [13]. The Face, Legs, Activity, Cry, and Consolability (FLACC) pain assessment was assessed at 5, 15, and 30 minutes after extubation: 0 points for content and relaxed; 1 to 3 for slight pain; 4 to 6 for medium pain; and 7 to 10 for severe pain and uncomfortable. We also observed the adverse reaction rate post-operation followed by consciousness.

Statistical analysis was performed using SPSS 19.0 (SPSS Inc., Chicago, IL). Measurement data were expressed as the mean ± standard deviation (± s), and comparisons between two groups using were tested using the t test. Counting data was expressed as [n (%)], and the χ2 test was used for statistical analysis with a significance level of 0.05. P <0.05 was statistically significant.

There is no conflicts of interest in this study.

5. Hou Y, Anesthesiology DO. The analgesic effect of combined application of Propofol and Remifentanil in pediatric tonsillectomy. Clin J Med Off. 2014; 42:370-372.

6. Alexander R, Olufolabi AJ, Booth J, El-Moalem HE, Glass PS. Dosing study of remifentanil and propofol for tracheal intubation without the use of muscle relaxants. Anaesthesia. 2015; 54:1037-1040.