Follicular lymphoma (FL) is a low-grade lymphoma that is malignant and runs a relatively indolent clinical course. It is said that the median age of onset of FL is the 60 s and is more common in women. FL commonly involves the lymph nodes, but bone marrow infiltration is found in 40–70% of affected patients [1]. The hallmark of this malignancy is a translocation of BCL2 and IGH genes. The identification of this translocation has been implemented as a useful diagnostic method for the detection of lymphomagenesis in patients with FL [1]. The rate of translocation has been reported to be 85–90%.

The hepatitis C virus (HCV) infects some 1.6 million people worldwide. It is an enveloped single-stranded RNA virus that has 1–6 genotypes, shows regional variation [2], and has been associated with chronic hepatitis, liver cirrhosis, and hepatocellular carcinoma (HCC). HCV infection has also been associated with extrahepatic lesions such as malignant lymphoma, cryoglobulinemia, chronic kidney disease, lichen planus, and porphyria [3].

In an epidemiological study of HCV-positive patients with malignant lymphoma, HCV infection was associated with a higher incidence of B-cell lymphoma compared to healthy controls (odds ratio [OR], 10.8) [4]. It has been reported that a high incidence of B-cell non-Hodgkin lymphoma (B-NHL) may be caused by HCV infection, diffuse large B-cell lymphoma (DLBCL; OR, 2.24), marginal zone lymphoma (MZL; OR, 2.47), and lymphoplasmacytic lymphoma (LPL; OR, 2.57) [5]. Meanwhile, there is a report showing the lack of association between FL and HCV infection (OR 0.50), whereas several other reports suggest that FL may be associated with HCV (OR 2.46 and 4.10) [6, 7]. Thus, the association between HCV and FL is still controversial.

It has been shown that there is a variation in the clinical presentation of B-cell lymphoma depending on the presence or absence of HCV. The clinical manifestations of HCV-positive splenic marginal zone lymphoma (SMZL) have been reported to be more common in women; nodular infiltrates and B symptoms are less common [8]. On the other hand, it has been reported that HCV-positive DLBCL is characterized by the common involvement of the spleen and liver [9]. Also, it is more common in the elderly and B symptoms are common; it is also characterized by elevated lactate dehydrogenase (LDH) levels, poor international prognostic index, and involves more than one extranodal site [10–13]. There is a higher incidence of liver damage during chemotherapy, although there is no difference in the overall survival (OS) and progression-free survival (PFS) of DLBCL [12].

Supplementary Table 1 shows the clinicopathological characteristics of HCV-positive FL. Ten patients were found to be HCV-positive and consisted of 6 men (60.0%) and 4 women (40.0%). The median age was 71.5 years (range, 49–87 years). At initial presentation, 4/10 patients (40.0%) showed B symptoms. No hepatic infiltration was found, and splenic infiltration was seen in only 1 patient (10.0%). Extranodal involvement was found to involve the bone marrow (40.0%, 4/10), gastrointestinal tract (20.0%, 2/10), and skin (10.0%, 1/10). Regarding the Ann Arbor staging system, almost of all of the patients were found to be in stage III/IV and 9/10 patients (90.0%) were categorized as high risk on the Follicular Lymphoma International Prognostic Index (FLIPI). Regarding the histological grade, 7/10 patients (70.0%) showed grade 1/2 and 3/10 patients (30.0%) showed grade 3A. As treatment, 7 patients received rituximab/cyclophosphamide/doxorubicin/vincristine/prednisolone (R-CHOP) therapy and 1 patient received rituximab/cyclophosphamide/vincristine/prednisolone (R-CVP) therapy. Relapse or disease progression was found in 3 patients. Seven patients (70%) died: 3 from lymphoma, 3 from a tumor aside from lymphoma (pancreatic cancer, lung cancer, and langerhans cell sarcoma), and 1 patient died of hepatic failure. The results of immunostaining were as follows: 9/10 (90%) patients showed positive results for CD10, 9/10 (90%) for BCL2, 7/10 (70%) for BCL6, and no patient (0%) for MUM1. Seven patients (70%) tested positive for IGH-BCL2 translocation, but the frequency did not change in HCV-positive FL as compared with that in HCV-negative FL (70.0% vs. 71.9%, respectively, p = 1.00). The incidence of other cancers excluding lymphoma was 9.1% (23/253) for HCV-positive FL and 30.0% (3/10) for HCV-negative FL, with a tendency (p = 0.06) to be higher in patients with HCV-positive FL.

Table 1 shows the results associated with HCV-positive FL. HCV genotype 1b was found in 6/7 (85.7%) patients, and genotype 2a was found in 1/7 (14.3%) patient. The amount of HCV-RNA present was 2.6–6.7 log IU/ml, and 6/8 (75.0%) patients showed a high viral load (amount of RNA >5.0 log IU/ml). Coinfection with hepatitis B virus was detected in 2/10 patients (20.0%). Regarding liver status, 8/10 patients (80.0%) developed chronic hepatitis, 1/10 (10.0%) patient developed HCC, and 2/10 (20.0%) patients developed cirrhosis. Regarding hepatic toxicity during treatment, there were five cases of Grade 1 and three cases of Grade 2. No patient developed cryoglobulinemia, and 2/10 (20.0%) patients tested NS3-positive. Figure 1 shows the histological findings in HCV positive follicular lymphoma. Regarding HCV eradication therapy, two (case 4 and 8) and 1 patient (case 5) underwent eradication therapy before the onset of FL and after treatment of FL, respectively. The rest of the patients did not undergo eradication therapy. The group receiving eradication therapy tended to have better overall survival and progression free survival than those not receiving eradication therapy, although the difference was not statistically significant. 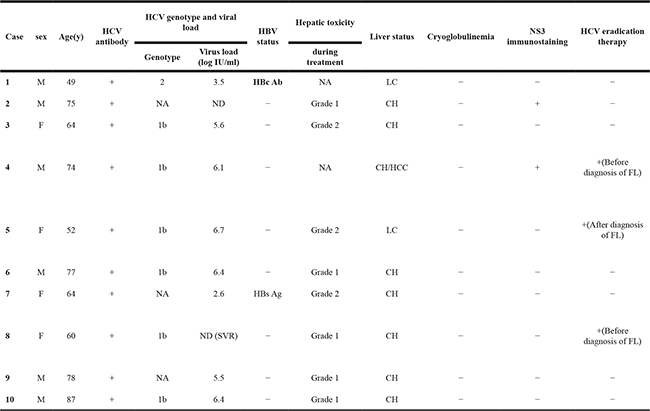 Table 2 reveals comparison between HCV-positive and negative FL. The patients with HCV-positive FL had a higher frequency of lymphadenopathy in four or more regions (p = 0.02), Ann Arbor stage III/IV (p = 0.002), hemoglobin <120 g/l (p = 0.02), elevated LDH level (p = 0.002), and categorization as high risk cases on FLIPI (p = 0.0007) than those of HCV-negative FL. There was no relationship with human T-cell leukemia virus type 1 (HTLV-1), human immunodeficiency virus (HIV), or hepatitis B virus (HBV). There was no difference in treatment and complete remission (CR) rate to initial therapy between the two groups. 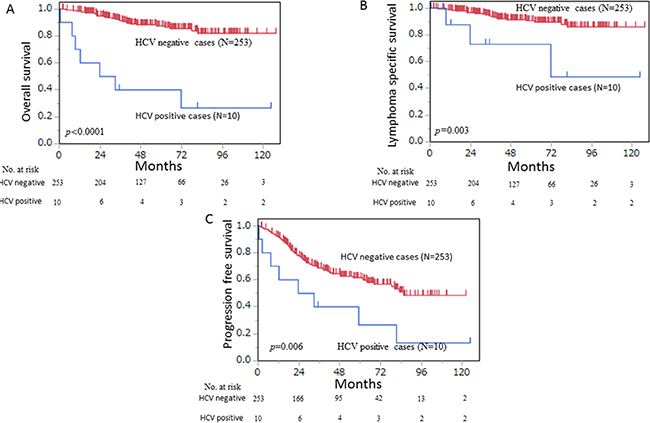 A clinicopathological comparison between HCV-positive and negative FL showed a higher proportion of high-risk categorization for FLIPI and a poorer OS curve was observed in HCV-positive FL than HCV-negative FL. In addition, multivariate analysis revealed that HCV infection was an independent prognostic factor for FL.

HCV-positive DLBCL with LC is considered to have a poor prognosis compared to that of HCV-positive DLBCL without LC [13]. The reason is that treatment for lymphoma is difficult due to the high incidence of toxicity and impaired liver function for LC [13]. In our study, there were two cases of HCV-positive FL with LC. One case (case 1) was difficult to treat due to liver failure, and the treatment to provide the best supportive care was chosen. In the other case (case 5), R-CHOP therapy was performed, and no recurrence was observed. In addition, the prognosis of HCV-positive FL was poor regarding OS, except for two cases of LC. Owing to the few cases with LC in the present study, the influence of LC on the progression of HCV FL cannot be adequately evaluated. However, the prognosis of HCV-positive FL remained unchanged by the presence or absence of LC.

In conclusion, HCV infection affected the clinicopathological features, including the OS in patients with FL. A more detailed study will be required to determine its effect on lymphomagenesis and to analyze its potential as a therapeutic strategy.

We investigated 263 patients who underwent biopsy at nine institutions (Karatsu Red Cross Hospital, Kushiro Rosai Hospital, Kyushu University Hospital, Kurume University Hospital, Sasebo City General Hospital, Shimabara Hospital, Nagasaki University Hospital, Hamanomachi Hospital, and Harasanshin Hospital) between 2005 and 2015, and were diagnosed with FL in the Department of Pathology, Kurume University. These 263 patients had been used in our previous reports [20, 21]. All the patients were reviewed by hematopathologists and diagnosed according to the World Health Organization (WHO) classification [1]. Certain subtypes of FL (i.e. pediatric follicular lymphoma, primary cutaneous follicular lymphoma, and primary follicular lymphoma of the duodenum) were excluded from the analyses. The grade of hepatic toxicity during treatment was based on the National Cancer Institute Common Terminology Criteria for Adverse Events (version 4.0). HCV infection was diagnosed in a patient if positive results were observed by using second and third generation immunoassay kits (Monolisa anti-HCV Plus, Sanofi Diagnostics Pasteur, France; and AxSYM HCV Version 3.0, Abbott Laboratories, Parsippany, NJ). The amount of HCV-RNA was measured using quantitative real-time polymerase chain reaction (COBAS® AmpliPrep/COBAS® TaqMan® HCV test; Roche Molecular Systems, Pleasanton, CA, USA), and the genotype was determined using the patients’ serum [22]. HCV-positive FL, except for one case (case 2), was defined based on positive results with the HCV antibody and HCV RNA. Clinical information was obtained by reviewing the patients’ medical charts. The use of materials and clinical information was approved by the Research Ethics Committee of Kurume University, and the study was carried out in accordance with the Declaration of Helsinki.

Immunohistochemical staining of NCL-HCV-NS3 (Leica Microsystems) was carried out by using 2.5-μm-thick, formalin-fixed, paraffin-embedded tissue sections for all cases. The slides were deparaffinized with xylene, followed by ethanol. After rehydration with water, antigen retrieval was performed with EDTA buffer (pH7.0) in a microwave oven at 95°C for 20 minutes. Endogenous peroxidase activity was blocked by incubating in 3% hydrogen peroxide for 5 minutes. Slides were incubated with anti-NS3 mouse monoclonal antibodies (NS3; 1:50 dilution; MMM33, Leica Microsystems) for 30 minutes. The slides were incubated with an EnVision1 System horseradish peroxide-labeled anti-mouse polymer (Dakocytomation) for 30 minutes. Visualization of NS3 was performed using diaminobenzidine for 5 minutes. Slides were counterstained with hematoxylin, dehydrated with ethanol, and mounted under coverslips. Each cases were considered positive if more than approximately 30% of the neoplastic cells were positive.

The clinicopathological characteristics of the patients were compared by using the Fisher’s 2-sided exact test. The end-point of OS was defined as the time of death. The end-point of PFS was defined as the time of relapse due to FL and death. Lymphoma-specific survival was defined as an end point of death due to FL death, excluding deaths from other causes. Survival curves of OS, PFS and lymphoma specific survival were calculated using the Kaplan–Meier method. A log-rank test was used to compare the survival curves. Univariate and multivariate Cox proportional regression models were used to evaluate the proposed prognostic factors. All statistical analyses were carried out using JMP version 11.0 (SAS Institute Inc., Cary, NC, USA), and a value of p < 0.05 was considered statistically significant.