Gastric cancer (GC) remains a devastating disease, particularly in the advanced stage, due to the lack of biomarkers for early detection [1–3]. However, early intervention of precancerous gastric lesions and stage I GC leads to an excellent 5-year survival rate ≥ 95% [4]. Gastric cancer (GC) is histologically divided into two major types according to the Lauren classification: intestinal and diffuse. The former arises from atrophic gastritis (AG) and intestinal metaplasia (IM) [5–8]. IM is regarded as a “breaking point” [5–7] because H. pylori eradication results in histological improvement of gastric mucosa in AG (a precursor to IM) but not in IM. Currently, there is no clear consensus on gastric IM surveillance guidelines. However, early detection of GC may be achieved using an annual surveillance program if patients meet at least one of the following criteria: (1) IM extension > 20%; (2) presence of incomplete type IM; (3) first-degree relative with gastric cancer; or (4) smokers [9].

Gastroscopy is a standard method for GC screening, but patients are reluctant to undergo this invasive procedure. It often fails to detect precancerous gastric lesions and early GC because superficial mucosal lesions are easily missed even by optimum preparation and advanced technology such as image enhancement endoscopy (IEE) [10, 11], and conventional computed tomography has a disappointing sensitivity rate [12, 13]. Currently, carcinoembryonic antigen (CEA) and carbohydrate antigen 19-9 (CA19-9) were reported with positive detection at levels as low as 20.9% and 34.6%, respectively [14, 15]. There remains an urgent need for serological biomarkers for precancerous gastric lesions and early gastric cancer detection. 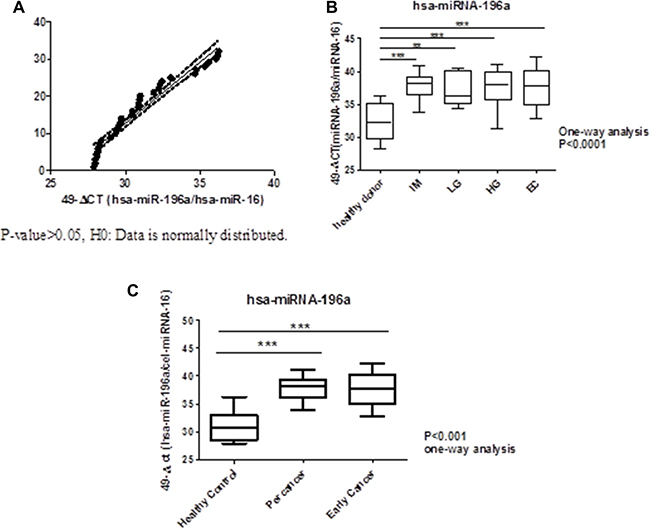 The AUC for healthy controls vs. IM was 0.9736, the sensitivity and specificity were 96.15% and 87.50%, respectively; for healthy controls vs. LGD/HGD, the AUC was 0.9495, the sensitivity and specificity were 100.00% and 78.13%; for healthy controls vs. early GC the AUC was 0.9318, the sensitivity and specificity were 100.00% and 75.00% (Table 1 and Figure 2). The best cut-off points of miRNA-196a expression for each pre-cancer and early cancer stage are summarized as in Table 1. The logistic regression equations showed that the miRNA-196a is a significant predictor of whether a patient is healthy or at a specific pathological stage of the precancerous lesion (Table 2). To further demonstrate the effectiveness of miRNA-196a as a biomarker for GC, we implemented signal and detection theory to measure the distance between the signal and noise. The theory introduces a distance indicator discriminability index, d’, which is calculated by hit (correct prediction), miss, false alarm, and correct rejection rates. A larger d’ implies that the signal is further from the noise and suggests that miRNA-196a is a better pre-cancer or cancer indicator. The data for the hit, miss, false alarm and correct rejection rates of miRNA-196a expression in healthy volunteers vs. patients with pre-cancer and EC based on the cut-off points in Tables 1 and 2 are summarized in Table 3. The hit rate and the correct rejection rate are high. The miRNA-196a expression correctly identified all patients with LGD, HGD, and EC while keeping the false alarm rate relatively low. Similarly, miRNA-196a expression correctly identified over 96% of IM patients with a false alarm rate as low as 12.5%. These results indicate that miRNA-196a is a very promising indicator of pre-cancer as well as cancer occurrence.

Table 1: Summary of cutoff points for different phases of diagnostics 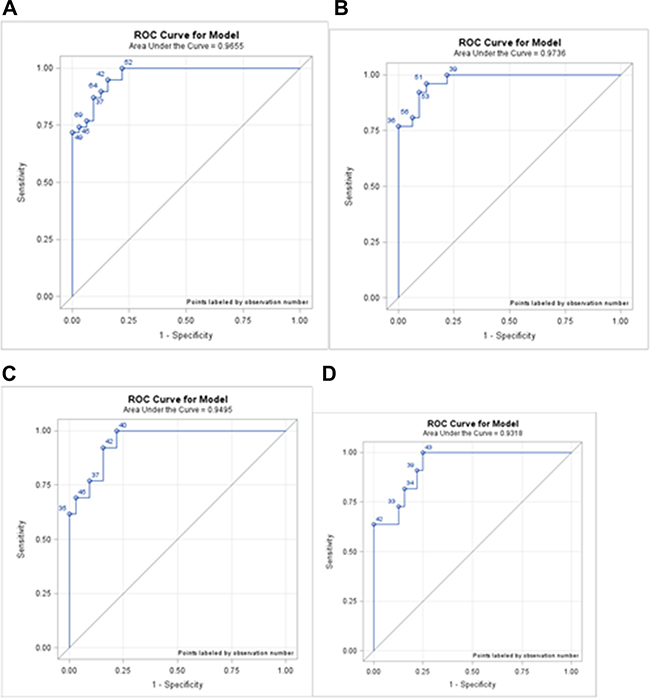 Table 3: Summary of indicators from signal and detection theory for healthy control vs. patients in precancerous and early cancer stages 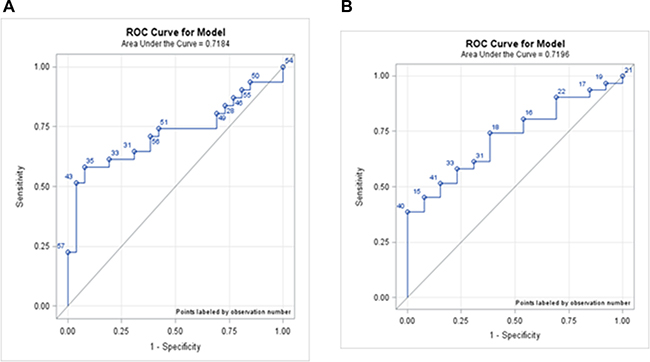 Table 4: Summary of indicators from signal and detection theory for precancerous and early cancer stages

Few studies have reported the detection of precancerous gastric lesions, particularly in the plasma. GC usually has a poor outcome as a result of the delay in diagnosis. Nevertheless, progression to cancer can be prevented if mucosal changes (e.g. AG or IM) are detected as early as possible. Endoscopic submucosal dissection can be done to excise the lesion once early gastric cancer or high-grade dysplasia is found while preserving the organ and promoting a good quality of life [20, 21]. At early stages most patients are asymptomatic, and the cancer is hard to detect, so it is challenging to prevent its progression. Although gastroscopy is a standard screening tool for gastric lesions, many patients consider it too uncomfortable. Thus, a liquid biopsy is more suitable for these asymptomatic patients, followed by gastroscopy to find those at risk.

The most pressing challenge is the identification of patients at high risk of diffuse or intestinal type GC. The latter is preceded by a sequence of precursor steps, which (colonic-type intestinal metaplasia) or small intestinal mucosa [22]. In our study, miRNA-196a expression is lower in healthy control compared with all stages of precancer, which might partially explain why IM is considered a “breaking point.”

The t-test and a one-way analysis of variance (ANOVA) were used for pair-wise comparison of the plasma miRNA-196a expression in different stages of pre-cancer and early cancer. The Kolmogorov-Smirnov test with α = 0.05 was used to verify the normality of healthy control samples. The receiver operating characteristic (ROC) curve and area under the curve (AUC) were used to assess the potential of using the plasma expression of miRNA-196a as a diagnostic tool for EC and precancerous lesions, such as incomplete and complete IM, LGD, and HGD. Youden’s Index was employed to determine the theoretical best cut-off points for miRNA-196a expression between healthy volunteers, incomplete and complete IM (hence after IM), LGD, HGD, and EC. Signal detection theory was used to find the best practical cut-off points for miRNA-196a expression from IM to early cancer and LGD/HGD to early cancer. The AUC and d’ were reported as indicators of the strength of the model. Signal and detection theory was implemented to determine the best practical cut-off points along with the probability of hit, miss, false alarm, and correct rejection. Descriptive data analyses were done using Prism 5 (GraphPad Software Inc., San Diego, CA, USA). Statistical analyses including ROC and signal detection theory were conducted using SAS 9.4 (SAS Institute Inc., Cary, NC, USA).

Circulating miRNA-196a is an effective biomarker that could afford patients with gastric dysplasia or early GC the chance to receive minimally invasive procedures to mitigate the disease progression. For example, we suggest that asymptomatic subjects with a high risk of developing gastric cancer could be screened by blood sampling for miRNA-196a. A follow-up with intensive gastroscopy (best combined with IEE) would be strongly advised for patients with significant changes in the circulating miRNA-196a level. Given that the number of patients with dysplasia and the total number of our study group was small, a large-scale study of circulating miRNA-196a as a biomarker for gastric pre-cancer detection is necessary.

This work was supported by grants from Chang-Gung, Taoyuan, Taiwan (CMRPG3D1392).