Effective impairment of myeloma cells and their progenitors by hyperthermia

Multiple myeloma (MM) remains incurable, and MM-initiating cells or MM progenitors are considered to contribute to disease relapse through their drug-resistant nature. In order to improve the therapeutic efficacy for MM, we recently developed novel superparamagnetic nanoparticles which selectively accumulate in MM tumors and extirpate them by heat generated with magnetic resonance. We here aimed to clarify the therapeutic effects on MM cells and their progenitors by hyperthermia. Heat treatment at 43°C time-dependently induced MM cell death. The treatment upregulated endoplasmic reticulum (ER) stress mediators, ATF4 and CHOP, while reducing the protein levels of Pim-2, IRF4, c-Myc and Mcl-1. Combination with the proteasome inhibitor bortezomib further enhanced ER stress to potentiate MM cell death. The Pim inhibitor SMI-16a also enhanced the reduction of the Pim-2-driven survival factors, IRF4 and c-Myc, in combination with the heat treatment. The heat treatment almost completely eradicated “side population” fractions in RPMI8226 and KMS-11 cells and suppressed their clonogenic capacity as determined by in vitro colony formation and tumorigenic capacity in SCID mice. These results collectively demonstrated that hyperthermia is able to impair clonogenic drug-resistant fractions of MM cells and enhance their susceptibility to chemotherapeutic drugs.

Multiple myeloma (MM) still remains incurable despite the implementation of novel anti-MM agents, indicating the strong need for continued investigation to develop innovative strategies. MM-initiating cells or MM progenitors are considered to contribute to disease relapse through their drug-resistant nature, and therefore become among the most important targets in the treatment for MM [1]. MM cells not only reside in the bone marrow but also expand outside bone. Immature MM clonotypic cells or MM progenitors are rather preferentially localized in extraosseous niches and may eventually grow as extramedullary plasmacytoma [1, 2]. Extramedullary expansion of plasmacytoma is generally accepted to represent a high-risk condition with more aggressive features and poorer prognosis.

Superparamagnetic iron oxide nanoparticles (SPIONs), contrast media for magnetic resonance imaging (MRI), are able to time-dependently produce heat under an alternating current magnetic field arbitrarily set to cover the contrast-enhanced tumor lesions by SPIONs, which can be applied to magnetic hyperthermia treatment. Therefore, SPIONs potentially achieve what is called “theranostics”, a combination of tumor imaging and targeted treatment for tumors [3]. We developed novel SPION nanoclusters coated with folic acid and polyethylene glycol via the thiol-ene click reaction to improve their targeting efficiency toward tumors [4]. In mouse plasmacytoma models, the SPION nanoclusters preferentially and selectively accumulated in plasmacytoma tumors but not in the bone marrow via intravenous injection, and we were able to diagnose tumor localization by MRI with contrast enhancement and generate heat to selectively kill tumor cells [4, 5]. Subsequently, we have synthesized magnetic nanoparticle clusters covered by a thermoresponsive polymer containing anticancer drugs of interest, which can target tumors and release the drugs by melting the polymer membrane by heat [5]. We demonstrated that such nanoparticle clusters were able to effectively debulk tumors in plasmacytoma animal models though heating and locally releasing an anti-cancer drug in combination. In the present study, we therefore aimed to determine an effective combination of hyperthermia with anti-MM agents, and clarify the impact of hyperthermia on drug-resistant MM cells and their progenitors.

The SPION nanoclusters we developed are able to heat within tumors without impairing non-tumorous tissues in plasmacytoma animal models [4, 5]. We therefore looked at the effects of heating at different temperatures up to 45°C. MM cells time-dependently underwent apoptosis when cultured at 43°C (Figure 1A). Hyperthermia induced MM cell death in a time and temperature-dependent manner (Figure 1B). Heat treatment at 45°C was able to induce substantial cell death in all MM cell lines even after 10 minutes. The heat treatment also reduce the viability of peripheral blood mononuclear cells (PBMCs) from normal donors, indicating impairment of normal cells by the heat treatment, although they seemed less sensitive to hyperthermia than MM cell lines at 41°C (Figure 1C). Therefore, because the heat treatment at 43°C appears to impair normal cells, heating should be localized within tumors to selectively kill tumors but spare the damage in surrounding normal tissues. In this regard, therapeutic options to deliver tumor-targeted heating such as “theranostics” with SPIONs appears to be beneficial. 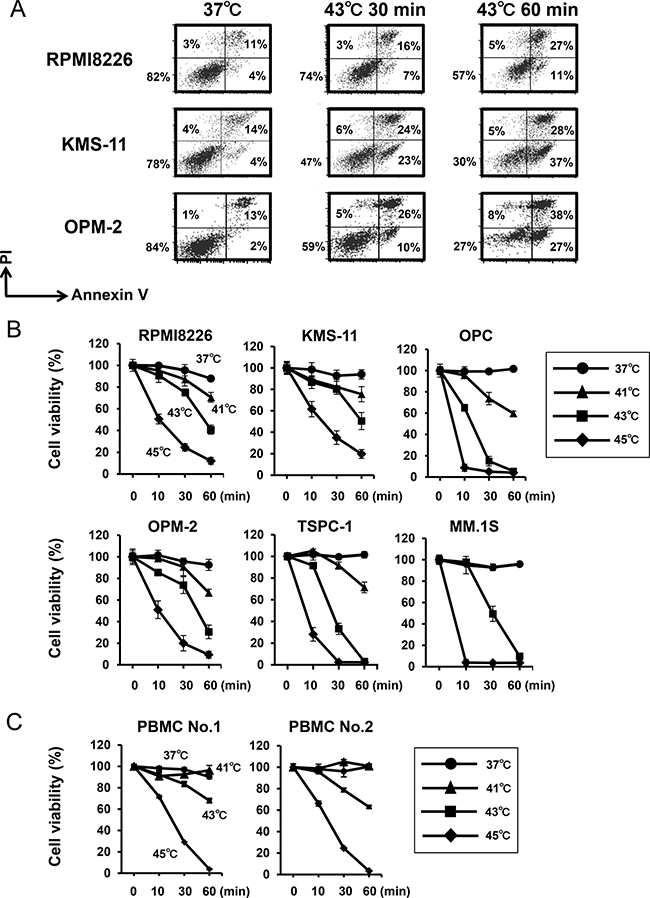 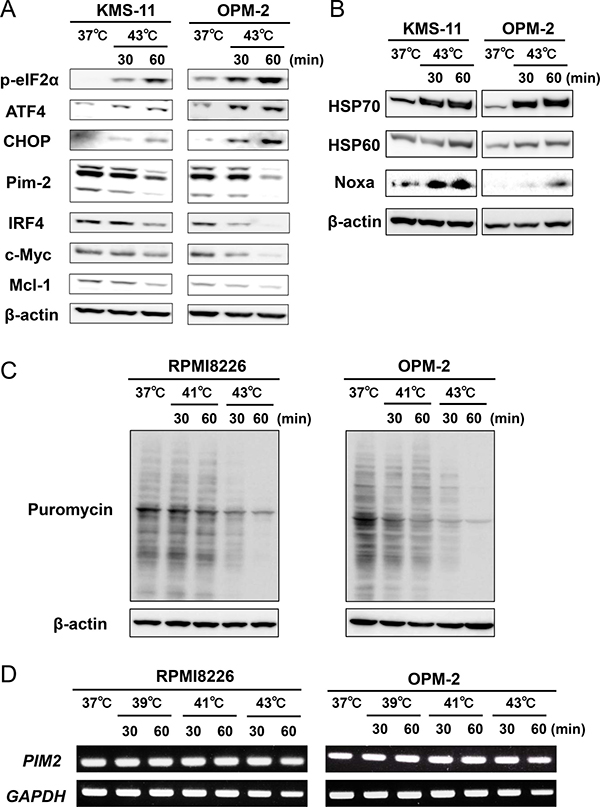 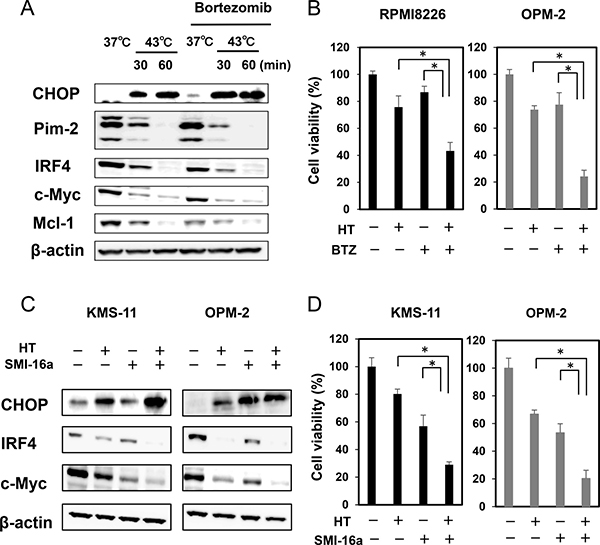 The SP is considered to be a drug resistant fraction containing cancer stem cells [10]. SP fractions were reported to be distinctly detected in the MM cell lines RPMI8226 and KMS-11 [11, 12]. Importantly, heat treatment at 43 and 45°C for 30 minutes markedly reduced the sizes of SP fractions in these MM cell lines although sizable non-SP fractions remained (Figure 4A), suggesting that SP cells can be targeted with heating. The heat treatment also suppressed colony formation of these MM cell lines in a temperature-dependent manner (Figure 4B). To further clarify the effects of hyperthermia on stemness or self-renewal capacity of MM cells, we next examined the effects of heat treatment on the tumorigenic capacity of MM cells using xenograft models. Luciferase-transfected RPMI8226 cells were treated with or without heat treatment at 43°C for 30 minutes, and then transplanted subcutaneously in SCID mice. The transplantation of MM cells without the heat treatment formed tumors in all the mice; however, no tumors formed in mice with inoculation of the heat-treated MM cells (Figure 4C). These results suggest that tumorigenic MM cells with a self-renewal capacity are susceptible to hyperthermia. 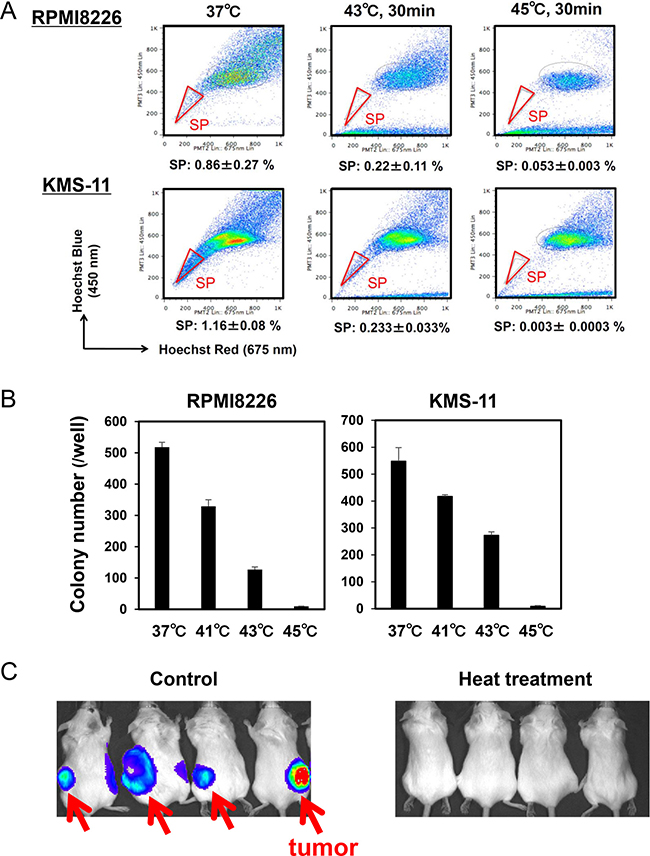 In summary, heat treatment is demonstrated to effectively enhance ER stress possibly through enhanced protein misfolding by heat, thereby inducing phosphorylation of eIF2α, along with the up-regulation of ATF4 and CHOP, to cause apoptosis in MM cells and their progenitors with stemness or self-renewing capacity. The enhanced ER stress may subsequently suppress translation of critical pro-survival mediators such as Pim-2, IRF4, c-Myc and Mcl-1, leading to further potentiation of MM cell death.

We are currently developing new versions of mesoporous nanoparticles containing SPIONs, which can store anticancer drugs and selectively release them in tumor lesions after targeting tumors when heat is generated by magnetic resonance. In the present study, we demonstrated that the combination with the proteasome inhibitor bortezomib or the Pim inhibitor SMI-16a is able to potentiate heat-induced MM cell killing. Therefore, the above mesoporous nanoparticles carrying proteasome inhibitors or Pim inhibitors warrant further study, especially in the setting of drug-resistant extramedullary plasmacytomas. The strategy of “theranostics” with drug-containing and heat-generating nanoparticles can be also applied to malignant lymphoma such as NK cell lymphoma, and various solid cancers which remain resistant to conventional treatment modalities.

The human MM cell lines, RPMI8226, KMS-11 were obtained from the American Type Culture Collection (Rockville, MD, USA). TSPC-1 and OPC were established in our laboratory [17]. OPM-2 was purchased from the German Collection of Microorganisms and Cell Cultures (Braunschweig, Germany). MM.1S was kindly provided by Dr. Steven Rosen (Northwestern University, Chicago, IL, USA). PBMCs were isolated from normal subjects as described previously [17]. All procedures involving human specimens were performed with written informed consent according to the Declaration of Helsinki and using a protocol approved by the Institutional Review Board for human protection.

Culture tubes with MM cell lines were tightly closed and immersed in a water bath at 41, 43 or 45°C for 10, 30 and 60 minutes. After the heat treatment, the MM cells were washed and incubated at 37°C 5%CO2 for 24 hours. Viable cell numbers were measured by cell proliferation assay using 2-(2-methoxy-4-nitrophenyl)-3-(4-nitrophenyl)-5-(2,4-disulfophenyl)-2H-tetrazolium (WST-8; Kishida Chemical, Osaka, Japan). To assess apoptotic cells, cells were stained with an annexinV-FITC and propidium iodide labeling kit (MEBCYTO Apoptosis Kit; MBL, Nagano, Japan) according to the manufacturer’s instruction, and analyzed by flow cytometry.

SP fractions were analyzed as described previously [18, 19]. Briefly, cells were incubated at 1.0×106 /ml with 5 μg/ml Hoechst 33342 (Sigma) for 90 minutes at 37°C in phosphate-buffered saline containing 3% fetal bovine serum, in the presence or absence of 100 mM verapamil (Sigma). After the incubation, the cells were washed and propidium iodide (1 mg/ml) was added to dead cells. SP fractions were analyzed with a flow cytometer (Beckman Coulter, Tokyo, Japan).

After heat treatment, MM cells were plated out in triplicates at 1 × 104 cells per dish into H4034 methylcellulose medium (Stem Cell Technologies), and cultured for 14 days. The numbers of colonies with > 40 cells were then counted under an inverted microscope.

Cells were collected and lysed in lysis buffer (Cell Signaling, Beverly, MA) supplemented with 1 mM phenylmethylsulfonyl fluoride and protease inhibitor cocktail solution (Sigma). The cell lysates were subjected to SDS-PAGE on a 10% polyacrylamide gel, and then transferred to polyvinylidene difluoride membranes (Millpore, Billerica, MA). The membranes were blocked with 5% non-fat dry milk in TBS with 0.01% Tween 20 for 1 hour at room temperature and incubated for 16 hours at 4°C with the primary antibodies. After washing, a secondary horseradish peroxidase-conjugated antibody was added and the membranes were developed using the enhanced chemiluminescence plus Western blotting detection system (American Biosciences, Piscataway, NJ).

Total RNA was extracted from cells using TRIZOL reagent (Gibco BRL, Rockville, MD). For reverse transcription-polymerase chain reaction (RT-PCR), 2 μg of total RNA was reverse-transcribed with Superscript II (Gibco) in a 20-μL reaction solution. One tenth of the RT-PCR products were used for subsequent PCR analysis with 24–30 cycles of 95°C for 30 seconds, 58°C for 30 seconds and 72°C for 30 seconds. The following primers were used: The primers used for RT-PCR were as follows: human Pim-2 sense 5ʹ-GGTAAGGGATTGAGGATC-3ʹ and anti-sense 5ʹ-TGGGGTATTGGAAGGAAAG-3ʹ; human XBP1 sense 5ʹ-CCTTGTAGTTGAGAACCAGG-3ʹ and antisense 5ʹ-GGGGCTTGGTATATATGTGG-3ʹ; human GAPDH sense 5ʹ-TGTCTTCACCACCATGGAGAAGG-3ʹ and anti-sense 5ʹ-GTGGATGCAGGGATGATGTTCTG-3ʹ.

Transfection of pGL4 luc (Promega) into RPMI8226 cells was performed using Lipofectamine LTX (Invitorogen) reagents according to the manufacturer’s protocol. A total of 2.5 μg of pGL4-luc in 200 μl Opti-MEM was mixed with 6 μl Lipofectamine LTX reagent for 15 minutes at an ambient temperature. The DNA-LTX complex was then added to 6-well culture dishes containing 106 cells. The medium was replaced at 16 hours after transfection, and the cells were subcultured in a medium containing G418 Geneticin at a final concentration of 500 μg/ml for 2 weeks. The medium was replenished every 3 days. The drug-resistant colonies were selected.

Severe combined immunodeficiency (SCID) mice (Charles River, Tokyo, Japan) were injected with 100 μl anti-asialo GM1 antiserum (Wako, Osaka, Japan) 1 day before tumor inoculation to eradicate residual natural killer cells. Luciferase-transfected RPMI8226 cells were treated with or without heat at 43°C for 30 minutes, and then the MM cells were transplanted subcutaneously in SCID mice. Six weeks after the inoculation, the tumorigenic capacity was evaluated by IVIS imaging system (SPI Summit Pharmaceuticals International, Tokyo, Japan). Animal experiments were conducted under the regulation and permission of the Animal Care and Use Committee of Tokushima University, Tokushima, Japan (toku-dobutsu 11083).

Data were expressed as mean ± standard deviation. The differences in the means between groups were compared using a one-way analysis of variance (ANOVA) with Scheffe’s post hoc tests. P ≤ 0.05 was considered as a significant difference. All statistics were performed using the Statistical Package for Social Sciences (SPSS 13.0 for Windows; Chicago, IL).

This work was supported in part by Grants-in-Aid for Young Scientists (B) to H.M., and S.N. Grants-in-aid for Scientific Research (C) to M.A., and a Grant-in-aid for Cancer Research (17-16) to M.A. from the Ministry of Health, Labor and Welfare of Japan. The funders had no role in study design, data collection and analysis, decision to publish, or preparation of the manuscript.