Validation of loci at 2q14.2 and 15q21.3 as risk factors for testicular cancer

1Division of Genetics and Epidemiology, The Institute of Cancer Research, London, UK

Testicular germ cell tumor (TGCT) is the most common cancer in men aged between 18 and 45, with more than 52,000 men diagnosed annually worldwide [1]. Known risk factors include a family history of the disease, a previously diagnosed germ cell tumor, subfertility, undescended testis (UDT) [2] and testicular microlithiasis [3], characterized by intratesticular calcification. Histologically, TGCT can be divided into two main subtypes: seminomas, which resemble undifferentiated primordial germ cells and nonseminomas, which show varying degrees of differentiation toward embryonal and extraembryonal structures. Some tumors show features of both classes (mixed histology). Both subtypes are thought to arise from progenitor germ cells through a pre-invasive phase of intratubular germ cell neoplasia (ITGCN) [4].

The cancer has a strong heritable basis, which is reflected in an observed four to eight -fold familial relative risk [5–8] and, from heritability analyses utilizing familial data, it has been estimated that genetic factors contribute to nearly half of all disease risk [9]. Despite the sizable heritable component, high penetrance TGCT susceptibility variants accounting for a sizeable proportion of genetic susceptibility have not been identified. We recently described enrichment in familial TGCT using exome sequencing of rare disruptive mutations in genes relating to ciliary and microtubule functions; however, these variants account for only a minor fraction of disease heritability [10]. In contrast, interrogation via genome-wide association studies (GWAS) for common variants of more modest effect size has proved vastly more fruitful, with a total of 50 independent risk loci proposed to date [11–22].

The UK OncoArray GWAS includes data from 10,628 UK individuals, comprising 3,206 TGCT cases and 7,422 controls. The final number of SNPs passing quality control filters was 371, 504, which were used to impute genotypes at over 10 million SNPs. We looked for evidence of association for the five index SNPs reported in the TECAC meta-analysis using a frequentist approach under an additive model. We also performed meta-analysis combining data from the UK OncoArray GWAS and the TECAC meta-analysis using a fixed-effects model. 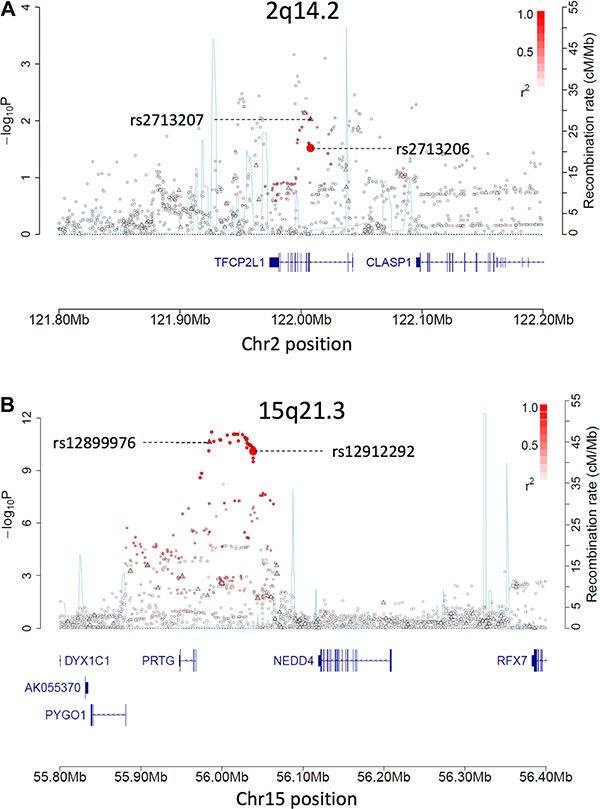 Figure 1: (A–B) Regional plots for loci 2q14.2 (A) and 15q21.3 (B) based on the UK OncoArray GWAS data. Triangles indicate directly genotyped SNPs while circles indicate imputed SNPs, with their position on the y axis indicating their -log10 association P values and their position on the x axis indicating their SNP build 37 coordinates. The intensity of red shading indicates the strength of linkage disequilibrium (LD) with the index SNP (enlarged circle). Recombination rates are plotted on the z axis (light blue). The Index SNP at each locus and its mostly strongly linked tagging SNP are labelled.

Table 2: Meta-analysis of the UK OncoArray GWAS and the constituent TECAC datasets

In summary, we present independent evidence supporting associations between loci at 2q14.2 and 15q21.3 and susceptibility to TGCT.

rs2713206 at 2q14.2 localizes to the intron of TFCP2L1 in an LD block of ~50 kb. TFCP2L1, a member of the CP2 family of transcription factors, is a component of a complex transcriptional network involved in the establishment and maintenance of pluripotency in embryonic stem cells. TFCP2L1 is highly expressed in primordial germ cells during embryogenesis [23] and is downregulated during transition of fetal gonocytes into spermatogonia [24]. TFCP2L1 is not expressed in normal adult testes, though it is in intratubular germ cell neoplasia unclassified (ITGCN, formerly known as carcinoma in situ, CIS) [24], a non-invasive precursor lesion from which TGCT is widely accepted to originate. As previously reported, there are eQTL variants in LD with the index SNP. The TGCT risk allele is associated with reduced TCFP2L1 expression, supporting transcriptional regulation of this gene as the functional mechanism through which the association may be mediated [22].

Our data did not provide evidence supporting association with TGCT risk for SNPs at three of the loci analyzed (rs3755605 at 3q26.2, rs11769858 at 7q36.3 and rs61408740 at 10q26.13). The absence of demonstrable association for these loci in the UK OncoArray dataset could be due to power, sampling error and winner’s curse. Variable LD between genotyped marker and causal variants and/or their frequency, hidden population substructures not accounted for by principal component analysis, differences in effect modifiers and technical artefacts induced by the use of different genotyping platforms or quality-control criteria may also be contributory. More detailed and/or larger studies are required to further explore the observed differences.

We investigated whether the loci at 2q14.2 and 15q21.3 are associated with different risks in subgroups of TGCT cases characterized by specific phenotypic characteristics. Neither locus showed a significant difference in effect for the subtypes analyzed. For bilaterality, maldescent and family history, there was very limited power to detect a difference because of the small numbers examined. However, analysis of seminoma compared to nonseminoma was better powered, with > 95% power to detect effect difference of ≥ 1.5 fold; absence of difference of effects is consistent with observations for SNPs identified in earlier GWAS [11, 13] suggesting that, despite their distinct histological and biological features, these two subclasses of TGCT share a common biological pathway of oncogenesis.

TFCP2L1 joins the growing list of candidate genes within TGCT risk loci linked to developmental transcriptional regulation, a key disease mechanism implicated in TGCT oncogenesis [21]. Further functional evaluation is required to explore the cellular mechanisms through which the associations are mediated. The set of 50 GWAS loci identified to date are more strongly predictive of disease than the SNP sets for cancer types such as breast, colorectal and prostate cancer despite much larger GWAS in these cancer types having identified much greater numbers of SNPs: those in the highest centile for risk estimated from the TGCT SNP set have a relative risk of > 14 compared to the population risk [21, 26]. The continued success of GWAS in TGCT provides a strong rationale for continuing studies to identify additional risk loci via these methods.

TGCT cases (n = 3,206) were ascertained via two UK studies: (1) a UK study of familial testicular cancer and (2) a systematic collection of UK TGCT cases. Case recruitment was via the UK Testicular Cancer Collaboration, a group of oncologists and surgeons treating TGCT in the UK (Supplementary Note). The studies were coordinated at the Institute of Cancer Research (ICR). Samples and information were obtained with full informed consent and Medical Research and Ethics Committee approval (MREC02/06/66 and 06/MRE06/41).

Control samples for the primary GWAS were all taken from within the UK. Specifically 2,976 cancer-free, male controls were recruited through two studies within the PRACTICAL Consortium (Supplementary Note): (1) the UK Genetic Prostate Cancer Study (UKGPCS) (age <65), a study conducted through the Royal Marsden NHS Foundation Trust and (2) SEARCH (Study of Epidemiology & Risk Factors in Cancer), recruited via GP practices in East Anglia (2003–2009). 4,446 cancer-free female controls from across the UK were recruited via the Breast Cancer Association Consortium (BCAC).

OncoArray data was filtered as follows: we excluded individuals with low call rate (< 95%), with abnormal autosomal heterozygosity (> 3 SD above the mean) or with > 10% non-European ancestry (based on multi-dimensional scaling); we excluded SNPs with minor allele frequency < 1%, a call rate of < 95% in cases or controls or with a minor allele frequency of 1–5% and a call rate of < 99%; we excluded SNPs deviating from Hardy-Weinberg equilibrium (P > 10−12 in controls and 10−5 in cases). The final number of SNPs passing quality control filters was 371,504. These data are deposited at European Genome–phenome Archive [EGA] under accession code EGAS00001001836.

OncoArray data tests of association between imputed SNPs and TGCT was performed under an additive genetic model in SNPTESTv2.5 [29], adjusting for principal components. Inflation in the test statistics was observed at only modest levels, λ1000 = 1.03 [21]. The inflation factor λ was based on the 90% least-significant SNPs [30]. The adequacy of the case-control matching and possibility of differential genotyping of cases and controls were formally evaluated using Q-Q plots of test statistics [21]. Population ancestry structure for the cohort was assessed through visualization of the first two principle components [21]; stable ancestral clustering was observed. Unadjusted case-only analyses on binary phenotypic characteristics were performed under an additive genetic model in SNPTESTv2.5, arbitrarily assigning one subdivision for a given phenotype to control status. Meta-analyses were performed using the fixed-effects inverse-variance method based on the β estimates and standard errors from each study using META v1.7 [31]. Cochran’s Q-statistic to test for heterogeneity and the I2 statistic to quantify the proportion of the total variation due to heterogeneity was calculated [32]. Regional plots were generated using visPIG software [33]. Power calculations were performed using the methods described by Skol et al. 2006 [34], implemented via the web interface at http://csg.sph.umich.edu/abecasis/cats/gas_power_calculator/index.html.

We thank the patients with TGCT and the clinicians involved in their care for participation in this study. We thank the patients and all clinicians forming part of the UK Testicular Cancer Collaboration (UKTCC) for their participation in this study. This study would not have been possible without the contributions of M.K. Bolla (Breast Cancer Association Consortium (BCAC)), Q. Wang (BCAC), K. Michailido (BCAC), J. Dennis (BCAC), P. Hall (Collaborative Oncological Gene-environment Study (COGS)); D.F. Easton (BCAC), A. Berchuck (Ovarian Cancer Association Consortium), R. Eeles (PRACTICAL), G. Chenevix-Trench (The Consortium of Investigators of Modifiers of BRCA1/2), J. Dennis, P. Pharoah, A. Dunning, K. Muir, J. Peto, A. Lee and E. Dicks. We also thank the following for their contributions to this project: J. Simard, P. Kraft, C. Luccarini and the staff of the Centre for Genetic Epidemiology Laboratory; and K.F. Doheny and the staff of the Center for Inherited Disease Research (CIDR) genotyping facility. The results published here are based in part on data generated by the TCGA Research Network. This study makes use of data generated by the Wellcome Trust Case Control Consortium 2 (WTCCC2). We thank all the individuals who took part in these studies and all the researchers, clinicians, technicians and administrative staff who have enabled this work to be carried out.