Another strategy to optimize gene expression data involves comparative and integrative analyses of gene expression in multiple cancer types [9, 10]. The integrative approach improves reproducibility and identifies common markers for multiple types of cancer. The multi-cancer biomarkers are more reliable and superior than cancer-specific biomarkers [11]. Genes or proteins that are directly linked are most likely to belong to the same biological pathway or function [12]. Such groups of genes or proteins that belong to the same biological pathway are called modules. A common module that is found in multiple cancers is defined as the consensus module.

Squamous cell carcinoma (SCC) is the most common histological type of head and neck cancer (HNC) and cervical cancer (CC). Both HNC and CC demonstrate similar multistep progression, where in normal squamous epithelial cells undergo dysplastic changes followed by carcinoma formation, which subsequently becomes invasive and metastatic. Moreover, human papilloma virus type 16 (HPV16) is a major pathogen in HNC and CC [13]. Therefore, in this study, we investigated consensus gene modules of HNC and CC to identify common targets for therapy of HPV16-positive HNC and CC.

The GSE6791 microarray dataset was analyzed to identify common genes that play a significant role in HNC and CC. The dataset included 54675 probes and 84 samples (42 HNC and14 normal head and neck samples as well as 20 CC and 8 normal cervical tissue samples). We analyzed only HPV16 positive samples to exclude bias because of different HPV types.

We identified significantly expressed genes separately in HNC and CC, based on Mann-Whitney U test. The rates of commonly identified genes were 43.8% and 28.9% of the detected significant genes from HNC and CC, respectively. This indicated that these two types of cancers might have similar genomic variations to some extent. 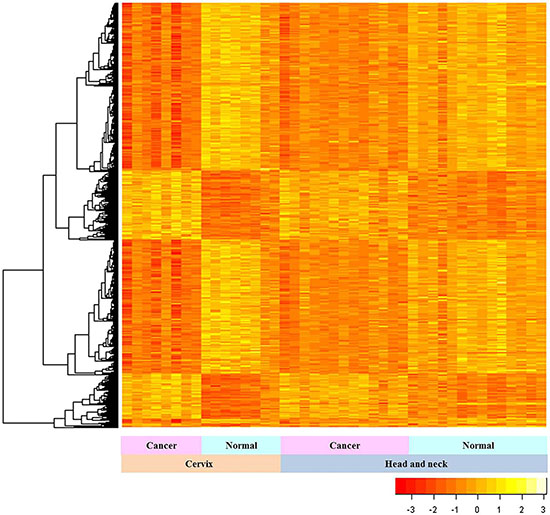 Consensus modules in HNC and CC 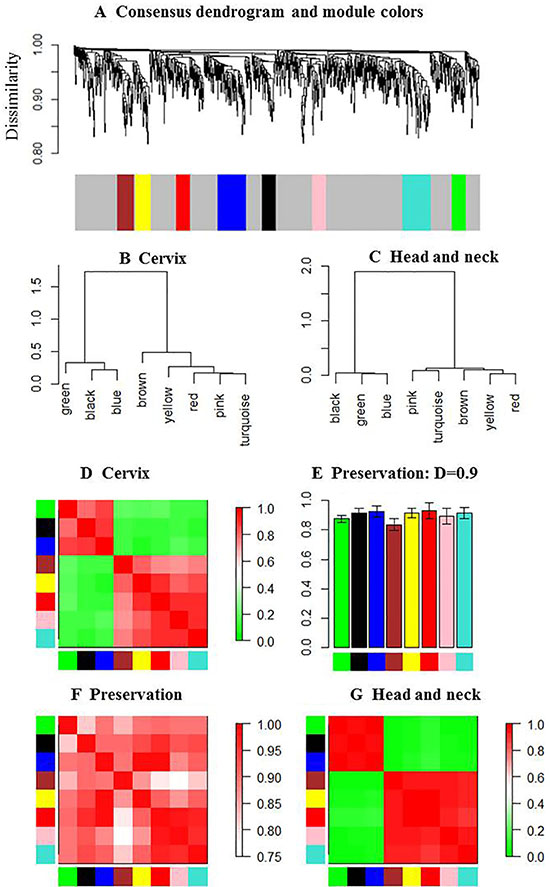 The modules were characterized by height and minimum size of branch. Consensus modules represent biological pathways shared between the HNC and CC data sets. For each data set, we represented the consensus modules by their corresponding eigengenes and then constructed a eigengene network (Figure 2). The consensus eigengenes in HNC and CC groups belonged to one of two branches (Figure 2B–2C). The green, black and blue modules formed the first branch, whereas the brown, yellow, red, pink and turquoise modules formed the second branch. The module eigengenes were highly preserved (Figure 2). The eigengene networks of HNC and CC are shown in Figure 2D and 2G, respectively. The high connectivity showed that each individual eigengene in a module was highly preserved relative to the other eigengenes. The preservation indices were 0.811, 0.938, 0.933, 0.92, 0.835, 0.963, 0.92 and 0.919 for the brown, yellow, blue, turquoise, green, red, black and pink modules, respectively, with the overall preservation of 0.90 (Figure 2E). The consensus modules were preserved between the two data sets (Figure 2F).

Next, we explored the gene expression patterns of the 8 consensus gene modules between the cancer and their corresponding normal samples (Figure 3). We observed much clearer distinct differences in expression patterns between CC and normal cervical samples comparing to the differences between HNC and their corresponding normal head and neck samples. The genes in the 8 consensus modules are shown in Table 1 and Supplementary Table 1. 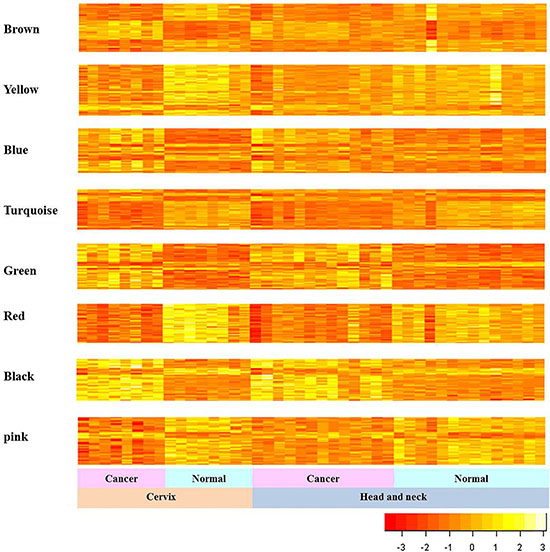 Twentyfour genes for each module were shown in the table and the order is insignificant.

Although single-target drugs inhibit or activate a specific target, their effects may be sub-optimal because of compensatory mechanisms [14–17]. Therefore, multi-target dugs are preferred to deal with the complexity of diseases [14, 16–18]. Cancer cell types are commonly classified by histopathology as well as molecular characteristics like gene expression, mutations, copy number variations and epigenetic alterations. These molecular characteristics help identify cancer-type and stage-specific prognostic biomarkers. In comparison to cancer type-specific biomarkers, multi-cancer biomarkers are more precise and accurate in research and clinic [11].

Previously, various specific biomarkers have been described for HNC or CC [19, 20]. However, consensus biomarkers are not well known for HNC and CC. Therefore, we investigated the various consensus gene modules in HNC and CC. We identified 8 consensus gene modules that showed differential expression patterns between cancer and normal samples in both types of cancers. Each module contained common genes that were important in HNC and CC. For example, SMAD2 that was included in the brown module correlated with poor prognosis in oral SCC [21] as well as cell cycle regulation and epithelial to mesenchymal transition (EMT) in CC [22]. Moreover, well known molecular biomarkers of HNC such as IL8, MMP1, and MMP10 [20] were included in the blue and green modules (Supplementary Table 1). Some of the genes in the modules are well known in various cancers, but have not been fully investigated in HNC or CC. For example, CACYBP in the brown module correlates with proliferation and metastasis in colon cancer [23, 24] as well as drug resistance in pancreatic cancer [25]. The modules also contained genes like LRRN4CL, NAV3 and STMN1 that have not yet been investigated in cancer research. Functional studies of these genes, which are not well known in HNC and CC will potentially reveal novel molecular mechanisms for both cancers and identify new molecular targets for the diagnosis and treatment.

In the brown module, ATP binding was a significant term with many ATP binding-associated genes like NIMA related kinase 2 (NEK2). NEK2 regulates centrosome separation by phosphorylating centrosomal proteins [26–28]. Aberrant NEK2 activity has been investigated in various malignancies [29–31] including CC [32, 33] and HNC [34]. In the turquoise module, extracellular exosome was identified as a significant term. Extracellular exosome is an organelle that contributes to intercellular communication and is produced by all cell types [35, 36]. It is implicated in the progression of various cancers, including brain and head and neck cancer [37–40]. The turquoise module included 33 extracellular exosome associated genes. These included LYN, a member of the SRC family of protein tyrosine kinases. Lyn is a key mediator of cell proliferation, migration and invasion in CC [41] and HNC [42].

The type I interferon (IFN) signaling pathway, which is involved in the antiviral response [43], host immunity [44] and cytotoxicity [45] was a significant term of the green module. IFNs belong to a family of multifunctional cytokines that activate (Janus Kinases)/STAT (Signal Transducer and Activator of Transcription) signaling pathway [46, 47], which up-regulates IFN-stimulated genes (ISG) [48]. ISG15 was localized in the green module [49].

A limitation of this study is that we used genes with significantly different expression patterns between cancer and normal samples for identifying consensus module. In future studies, we plan to pursue the whole gene set to identify the consensus modules that will also include similarly expressed genes with aberrant function due to mutations. Future studies will also include the validation of the identified gene modules using other cancer types.

In conclusion, we identified consensus gene modules of HNC and CC to identify common targets for multicancer therapy, especially for cancers that are HPV16-positive. The modules included genes that are involved in significant biological functions associated with cancer progression.

We used a publicly available gene expression dataset (GSE6791) [50] that included 42 head and neck cancer, 14 normal head and neck, 20 cervical cancer and 8 normal cervix tissue samples. The HPV types in these cancer samples were HPV16, HPV18, HPV33, HPV31, HPV35, HPV55 and HPV66. We analyzed HPV16-positive samples only to exclude bias due to different HPV types. The dataset is summarized in Table 3.

Table 3: Summary of the dataset used in this work

Mann–Whitney U test was performed to determine the differently expressed genes in HNC and CC cancer samples in relation to their corresponding controls. After identifying the differentially expressed genes in HNC and CC, hierarchical clustering analysis was performed to construct different modules, as described previously [7, 12]. Principal component analysis (PCA) was used to identify the eigengene of each cluster or module. All statistical analyses were conducted using Rversion 3.3.1 software package including packages for consensus module detection.

Gene modules refer to genes that show similar expression patterns in cancer cells or tissues in comparison to normal cells or tissues. Consensus modules refer to modules that are similar in multiple cancers. Hierarchical clustering according to a measure of dissimilarity is used to group genes with similar expression profiles into modules [12]. We used average linkage hierarchical clustering with consensus dissimilarity measure and defined modules as branches of a tree [7, 51]. For cut-off branches, we used a fixed height cut-off value of 0.95. The modules contained a minimum number of genes (25 genes per module in this study).We identified modules in a multistep process [7]. First, we performed hierarchical clustering based on consensus dissimilarity measure. Then, the cluster tree was cut at a fixed height cut-off value. Each branch was considered a separate module. Genes that were not assigned to any branch or module were denoted in grey.

Construction of the eigengenes network

denote the eigengenes of the ithconsensus module in data sets A and B, respectively; cor(X,Y) represents correlation coefficient of X and Y.

High values indicate strong preservation between the ithand jthconsensus modules across the two data sets. The preservation statistic is maximized when the correlation of the ithand jthconsensus modules in data set A is the same as in data set B. For biological validation, we used the KEGG pathways to determine the consensus biological terms that were associated with the gene lists in modules [54].

All authors declare that there are no conflicts of interest.

52. Hotelling H. Analysis of a complex of statistical variables into principal components. Journal of Educational Psychology. 1933; 24:417–441.