In order to investigate the function of toll-like receptor 4/nuclear factor-kappa B (TLR4/NF-κB) signal pathways in the pathogenesis of diarrhea-predominant irritable bowel syndrome (IBS-D), IBS-D animal models were established in wistar rats challenged with acute and chronic stresses (29 days). Wistar rats without stress-challenged were used as controls. IBS-D models were randomly divided into two groups: one was treated with normal saline, another group was treated with TLR4/NF-κB inhibitor, pyrrolidine dithiocarbamate (PDTC) (50mg/kg/week) for continuous four times. Our results demonstrate that continuous stresses can induce the characteristic symptoms of IBS-D, including high wet stool rate and intestinal flora imbalance. Further examinations of colon tissues show that the protein expression levels of TLR4 and NF-κB in IBS-D groups are higher than that in control group. The secretory levels of interleukin (IL-8), tumor necrosis factor α (TNFα), and myeloid differentiation factor 88 (MyD88) are significantly increased in IBS-D group. Administration with PDTC effectively downregulates levels of these inflammatory factors. In contrast, interleukin-10 (IL-10) is in an opposite alteration with lower levels in IBS-D groups and the PDTC treatment increases it to the levels as in control group. Moreover, inhibition of the TLR4/NF-κB by PDTC improves the microstructure of intestinal mucosa mainly by increasing the height of villi. Our results suggest that TLR4/NF-κB signal pathway plays an important role in the modulation of inflammatory responses in IBS-D, which might be a therapeutic target for the IBS-D. All of these findings also provide the evidence concerning an inherent linkage between the axis of stress/NF-κB/inflammation and IBS-D.

Irritable bowel syndrome (IBS), a heterogeneous gastrointestinal disorder, is a kind of digestive diseases characterized by chronic recurrent abdominal pain or discomfort associated with abnormal bowel habits and (or) changes of defecation traits. About 15% of people in the world are believed to be affected by this high morbidity rate of disease [1, 2]. According to the changes in bowel habits, IBS is classified into three main types: diarrhea-predominant (IBS-D), constipation-predominant (IBS-C), and alternating stool pattern (IBS-A) [3]. And IBS-D is the most common type [4]. However, it remains unclear the mechanisms to cause IBS-D.

The PDTC treatment relieves the symptoms of IBS-D

Diarrhea is a characteristic symptom of irritable bowel syndrome. After challenged with series of stresses, diarrhea appeared earlier in rats of IBS-D group, but not in the control group. The symptom in the PDTC treated group was better than that in non-treated IBS-D group. The daily defecation number in IBS-D group was increased, compared with the control with statistical difference (p<0.05) (Figure 1A). The PDTC treatment could partially control the diarrhea. On 30th day, the wet stool rate in IBS-D group was significantly higher than that in the PDTC treated group (12.15±0.85 versus 7.25±0.58) (p<0.05) (Figure 1B). This result suggests that blocking TLR4/NF-κB pathway may improve IBS-D-related symptoms. 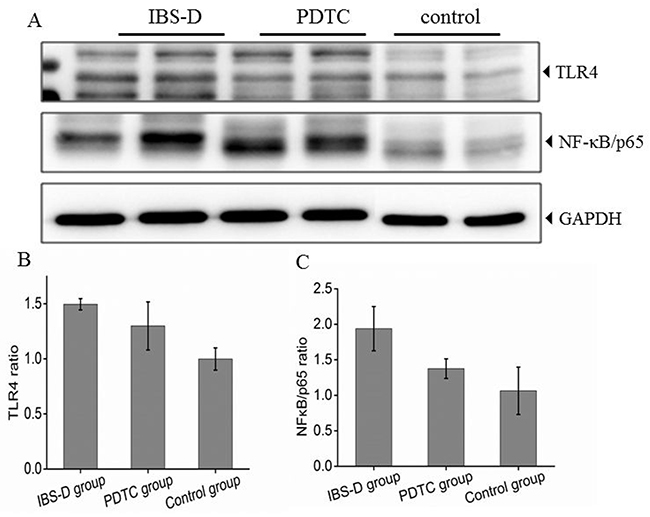 The PDTC treatment regulates the secretory levels of IL-8, IL-10, TNF-α, and MyD88

It is well known that TLR4/NF-κB pathway plays an important role in the regulation of inflammatory responses [14]. To investigate whether inflammation is involved in the pathogenesis of IBS-D, serum samples were collected from three groups of rats. Cytokines were measured by ELISA. Our results showed that secretory levels of IL-8 was significantly increased in IBS-D group when it was compared with that in the control group (p<0.05) (Figure 3A). The PTDC treatment remarkably decreased the levels of IL-8 (Figure 3A). In contrast, the secretory levels of IL-10 was lower in IBS-D than that in the control group (p<0.05) (Figure 3B). There was a trend that the PTDC treatment could upregulate the levels of IL-10, but without statistical difference (Figure 3B). As for the levels of NF-κB-dependent cytokine TNF-α, it was significantly increased in the IBS-D group (p<0.05) (Figure 3C). The PDTC effectively blocked the secretory levels of TNF-α to similar levels as in the control (Figure 3C). The function of myeloid differentiation factor 88 (MyD88) is closely associated with TLR-4 signaling pathway [16]. MyD88 was remarkably increased in the IBS-D group, compared with control (p<0.05). And the PDTC administration was able to reduce the levels of MyD88 (Figure 3D). These results suggest that TLR4/NF-κB pathway can modulate inflammatory factors to affect the progress of IBS-D. 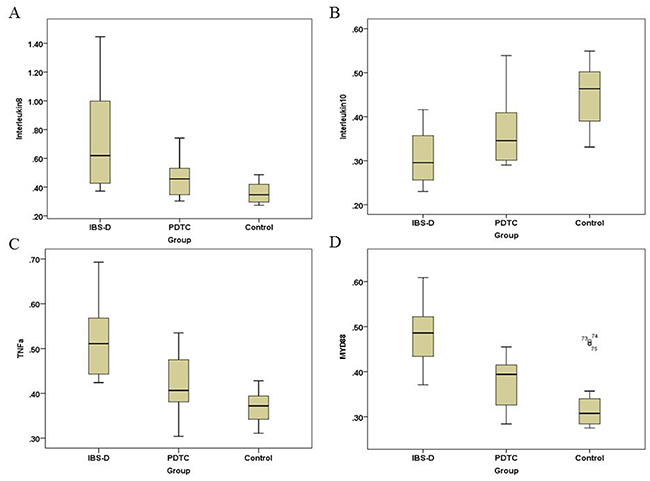 The PDTC treatment improves the microstructure of the intestinal mucosa 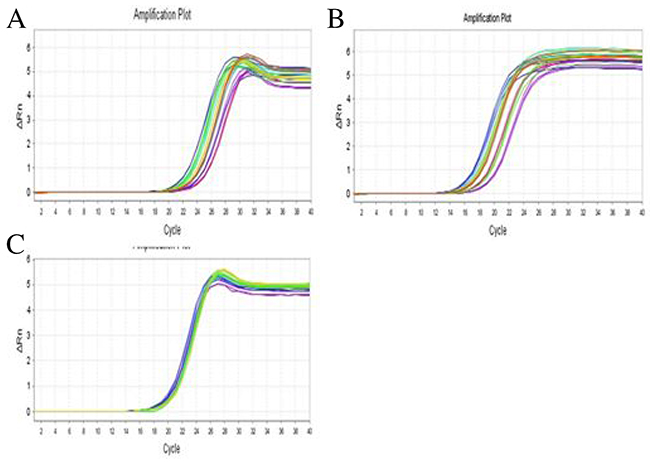 The treatment of IBS-D patients is still based on their specific digestive tract symptoms in clinic, due to lacking of a uniform standard[19]. There is an increasing requirement to find an effective target therapy for IBS-D patients. In the current study, we established an in vivo model of IBS-D through challenging with stresses. Remarkable elevation of TLR4/NF-κB signal pathway and inflammatory factors were observed in IBS-D rats. Importantly, inhibition of TLR4/NF-κB can reverse the abnormal expression of inflammatory factors and improve the symptoms of ISB-D. Therefore, this study provides an important rationale for the target therapy for ISB-D through blockade of TLR4/NF-κB pathway. All of these findings link the stress/NF-κB/inflammation axis and the IBS-D.

The effects of stress on the pathogenesis of IBS-D have attracted many attentions in patients [20–22]. Researchers are focusing on how the brain-gut axis interaction affects the progress of IBS [23]. Further reduction of stress through psychological interventions has demonstrated therapeutic effects on IBS in clinic [21]. Here, we successfully establish IBS-D animal model after challenging with different stresses, providing a strong evidence to indicate that stresses are causative factors for IBS-D. In response to stresses, many inflammatory cytokines and related signaling pathways are activated, which can affect the function of intestinal mucosa with increasing intestinal permeability or visceral hypersensitivity and eventually result in IBS-D symptoms [24–26], rather than damage the structure of intestinal mucosa. In line with these observations, our results also demonstrate that inflammatory factors, such as IL-8, TNFα, and MyD88 are significantly increased in the serum of IBS-D rats. And these inflammatory factors are modulated by the TLR4/NF-κB signal pathway [27].

NF-κB is well known as a critical transcription factor to modulate both stress and inflammatory responses [28, 29]. Nonetheless, NF-κB can also be activated in the setting of stresses even though the mechanisms are poorly understood [30]. Thus, NF-κB has proven to be a viable therapeutic target for diseases related to stress and inflammation, such as neurodegenerative diseases and diabetes [31, 32]. NF-κB exerts its biological function mainly through dynamic nuclear DNA/protein binding [30]. A variety of inflammatory factors, such as TNF family members are NF-κB-dependent genes. Therefore, inhibition of NF-κB can effectively block the inflammatory pathways. In agreement with these observations, TLR4/NF-κB protein expression levels are elevated in IBS-D model after challenging with stresses. Although we do not observe dramatic downregulation of NF-κB protein levels, NF-κB-dependent TNFα is significantly downregulated by the inhibitor of NF-κB, PDTC, indicating that the activity of NF-κB is effectively blocked by this inhibitor. Notably, TNFα has been considered as a key inflammatory factor relevant to IBS [33]. Importantly, the symptoms such as diarrhea and microstructure of mucosa are improved by the NF-κB inhibitor treatment in our IBS-D model.

Collectively, our findings indicate a correlation between the stress/NF-κB/inflammation axis and IBS-D. NF-κB functions as a key mediator to modulate stress and inflammatory responses. It is worthy to mention that multiple factors are involved in this stress-associated inflammatory cascades [34]. All of these molecules form a complex network to regulate the progress of disease. Our data provides an important rationale for further exploring target therapy in IBS-D.

Pyrrolidine dithiocarbamate (PDTC) was purchased from Sigma-Aldrich. TLR4 antibody was obtained from Bioss (USA), NF-κB antibody was bought from Abcam (USA), and GAPDH antibody was from ZSGB-BIO (China).

Total 30 rats were randomly divided into three groups: IBS-D group, PDTC group, and control group. The rats of IBS-D group and PDTC group received acute and chronic stresses to build up IBS-D model (4 week). Specific stresses [23] included 12 hours of continuous lighting at night, 45°C hot environment for 5 minutes, 4°C cold environment for 3 minutes, tail clamp for 1 minute, horizontal vibration (120 / min) for 40 minutes, and food deprivation for 24 hours. The Wistar rats in IBS-D group and PDTC group experienced the mentioned stresses once a week in the random order for 3 consecutive weeks and then rested 1 week. On the 29th day, their anterior shoulder, the forearm and the chest were bound by tapes for 1 hour to restrict the upper limb scratching the head and face, but not to restrict their activities. The only different procedure between IBS-D group and PDTC group is that the rats in IBS-D group received one time intraperitoneal injection of normal saline (1ml per week) for 4 times, while the rats in PDTC group received once a week of intraperitoneal injection of PDTC (50mg/kg) [15] for four times. Rats in control group did not take any operation. The wet stool rate and sucrose water intake of the mice were recorded on 30th day.

The fecal samples were collected on 30th day of experiment and immediately stored at −80°C for RT-qPCR analysis. On 31th day of experiment, all the rats were anesthetized. Blood samples were collected through inferior vena cava. After centrifuge, serum was collected and stored in −80°C for cytokines detection. Then, rats were sacrificed. A 4cm long sample was taken from each Sigmoid colon (about 8cm distal to the anus), 1 cm from two ends were removed respectively. The rest of 2cm gut tissue was cleaned with physiological saline and divided into two parts: one part was fixed in 10 % formalin for Hematoxylin & Eosin (HE) staining, another part was stored in liquid nitrogen for Western blotting.

Intestinal tissues were collected from three groups of rats. Protein was extracted with lysis buffer. Total amounts of 30μg protein per sample were separated by electrophoresis, then were transferred onto PVDF membranes (Invitrogen, USA). The membranes were probed with antibodies against to TLR4 and NF-κB (p65). GAPDH was used as a loading control.

Paraffin-embedded intestinal tissues were cut into 5-mm-thick sections. The sections were immersed in xylene and hydrated with ethanol to deparaffinize. These sections were routinely processed for HE histology. The Villus structure, length and integrity of gut mucosa were observed by optical microscope (Olympus, CHZ12). Images were taken by digital camera (JEM-1230, Japan).

This study was supported by the National Natural Science Foundation of China (No. 81670494, Li-Hong Cui).