Peroxisome proliferator-activated receptors γ (PPARγ) is a member of nuclear receptor superfamily, and studies have demonstrated that dysregulation of PPARγ was associated with gestational diabetes mellitus (GDM), which is one of the most common metabolic abnormalities occurring during pregnancy. However, the results regarding the associations between PPARγ and GDM were conflicting among different studies. The present study aimed to determine the expression of PPARγ in adipose and placenta from GDM women in a Chinese population and to further explore the role of PPARγ in GDM women. The adipose and placenta tissues were isolated from GDM women and healthy pregnant women at term. The mRNA and protein expressions of PPARγ in adipose and placenta tissues were determined by qRT-PCR and western blot, respectively. Univariate correlation analysis was used to analyze the relationship between PPARγ expression and clinical characteristics of patients. The levels of tryglycerides and HbA1c were significantly higher, while the levels of low density lipoprotein (LDL) cholesterol, adiponectin and insulin were significantly lower in the GDM women than that in the healthy pregnant women. The mRNA and protein expression of PPARγ in both adipose and placenta from GDM women were significantly lower than that from healthy pregnant women. PPARγ mRNA expression in both adipose and placenta positively correlated with LDL cholesterol and adiponectin levels, and negatively correlated with tryglycerides and glucose levels at 0 h, 1 h and 2 h of 75 g oral glucose tolerance test. In summary, our results suggest that PPARγ may be a key modulator in the development of GDM, due to the roles of PPARγ in glucose homeostasis and adipose tissue development and function.

Gestational diabetes mellitus (GDM) is one of the most common metabolic abnormalities occurring during pregnancy, and affects 1% to 14% of all pregnant women depending on ethnic group and the diagnostic test employed [1]. GDM is defined as glucose intolerance with onset or first recognition during pregnancy [2]. Studies have demonstrated that GDM was associated with various complications in both mother and newborn. Up to date, several factors contributed to GDM have been identified, such as altered plasma adipokine levels, inflammation, deregulation of insulin signaling pathway, oxidative stress [3-6]. Unfortunately, the precise mechanisms underlying the pathophysiology of GDM are not fully understood.

Due to the regulatory roles of peroxisome proliferator-activated receptors γ (PPARγ) in glucose and lipid metabolism, adipocyte differentiation, and inflammation, PPARγ has been shown to be associated with type 2 diabetes mellitus in a large number of studies [7-9]. Studies showed that PPARγ involved in the regulation of genes related to lipid synthesis and storage, adipokine production, and insulin signaling [10, 11]. Activation of PPAR γ by its agonist, thiazolidinediones, improved insulin sensitivity in insulin-resistant animal models and diabetic patients [12]. Mutation of human PPARγ gene has been found to be associated with increased insulin resistance, hypertension and diabetes [13]. In addition, PPARγ can also function in suppressing the production of monocyte and macrophages inflammatory cytokines such as TNF-α, IL-1β and IL-6 [14]. In the patients with GDM, the PPARγ was found to be down-regulated in both placenta tissues and adipose tissues [15, 16]. On the other hand, study investigating the mRNA expression of PPARγ in leukocyte showed that PPARγ was up-regulated in patients with GDM and positively correlated with glucose concentrations at 1 h and 2 h of 75 g oral glucose tolerance test (OGTT) and also negatively correlated with plasma high density lipoprotein (HDL) cholesterol concentration [17]. The conflicting results regarding the PPARγ expression in different tissues examined suggest the complex mechanisms of PPARγ in GDM.

Though the expression of PPARγ in adipose and placenta from patients with GDM has been demonstrated in separated studies, the association between PPARγ expression and the clinical characteristics has not been examined so far. In the present study, the expression of PPARγ was examined in both adipose tissues and placenta tissues from both healthy pregnant women and GDM women. The present study also measured the clinical characteristics in the recruited pregnant women, and we for the first time investigated the relationship between PPARγ expression in both adipose and placenta tissues and the relevant clinical parameters from a GDM women in a Chinese population. In addition, the underlying mechanisms in PPARγ-involved in GDM were discussed.

Table 1: Clinical parameters between healthy pregnant and GDM subjects in the present study

The qRT-PCR assay and western blotting assay were performed to examine the PPARγ mRNA and protein expression levels, respectively, in the adipose and placenta from the recruited subjects. The results showed that the PPARγ mRNA expression levels were significantly down-regulated in the GDM women when compared to that in the normal healthy pregnant women (Figure 1A), and western blot assay showed that the protein levels of PPARγ were lower in the adipose tissues from GDM women than from that from healthy pregnant subjects (Figure 1B). In addition, the mRNA and protein expression levels of PPARγ in the placenta tissues were also determined, and consistently, the mRNA and protein expression of PPARγ in the placenta from GDM women were significantly lower than that from healthy pregnant women (Figure 2A and 2B). 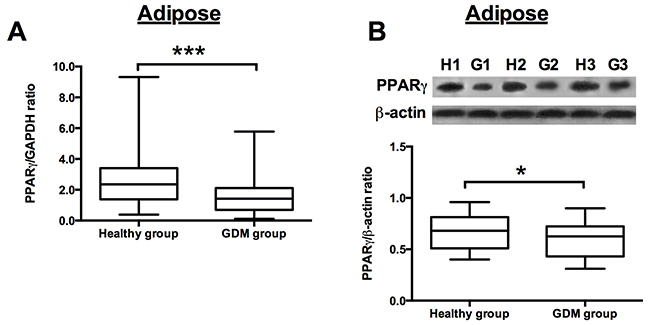 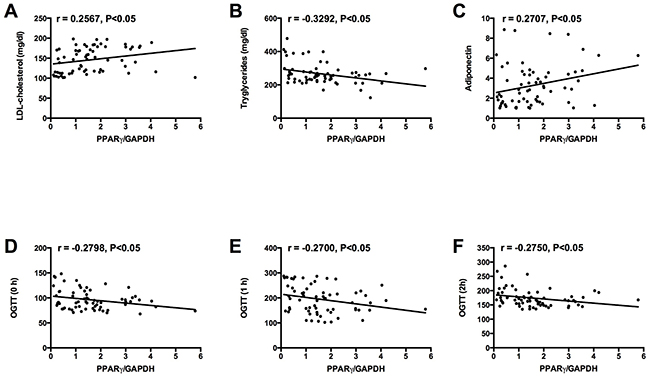 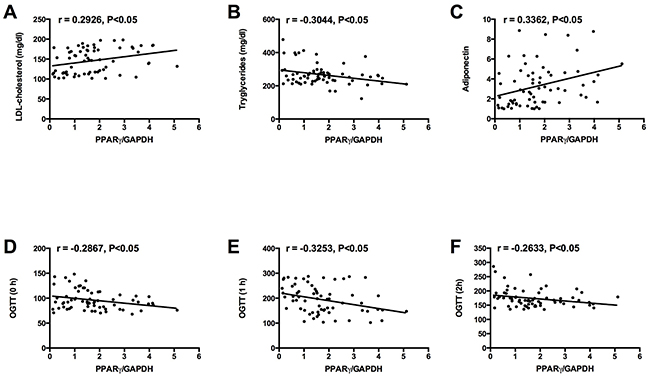 Pregnant women with GDM are at an increased risk of developing preeclampsia and delivering macrosomic infant [18]; and also are prone to developing type 2 diabetes mellitus and cardiovascular diseases after pregnancy [19]. For the newborns, they had an increased risk of developing neonatal hypoglycaemia, hypocalcaemia, polycythemia, respiratory distress syndrome [20], and they also are prone to develop obesity and abnormal glucose metabolism [21]. Because of poor availability of metabolic tissues from pregnant women, there is very limited knowledge about the significance of PPARγ in GDM. Studies have demonstrated the role of PPARγ in the normal placental development and trophoblast differentiation and invasion in gestational tissues [22, 23]. However, it would be helpful for us to have a better understanding of the PPARγ underlying the pathophysiology of GDM if more clinical samples can be collected from pregnant women for examination. As PPARγ is involved in glucose and lipid metabolism in type 2 diabetes mellitus [24, 25], it is probable that PPARγ may also play important roles in the GDM. In the present study, decreased expression of PPARγ was observed in both adipose tissues and placenta tissues from patients with GDM. Consistently, previous studies have shown that the expression of PPARγ was down-regulated in the adipose tissues from obese GDM women [16]. These results may suggest that the down-regulation of PPARγ may be an important modulator in the development of GDM.

The lipid and lipoprotein metabolism has been shown to be affected in the GDM women [30]. In the present study, we found that the levels of LDL cholesterol and adiponectin were significantly lower, and the levels of tryglycerides were significantly higher in GDM women than that in healthy pregnant women. Consistently, studies from Koukkou et al., showed that LDL cholesterol was decreased and tryglycerides was increased in GDM women [31]. Capobianco et la., showed that maternal serum adiponectin concentrations were significantly lower in GDM patients compared with patients with normal glucose tolerance [32]. In addition, we also found that the expression of PPARγ in both adipose and placenta tissues from GDM women was negatively correlated with trygylcerides levels, and positively correlated with LDL cholesterol and adiponectin levels, suggesting PPARγ may be involved the altered metabolism of lipid and lipoprotein in GDM women. However, the relationship between PPARγ expression and altered metabolism of lipid and lipoprotein in GDM women may require further examination. Both in vitro and in vivo studies have demonstrated that PPARγ played important roles in the transcriptional cascade underlying adipocyte differentiation [33, 34], and PPARγ also was essential for the entraining of adipose tissue lipid metabolism to nutritional state [35]. More importantly, PPARγ was found to promote futile cycling in adipocytes between triglyceride esterification and de-esterification [36]. Taken together, the significant correlations between PPARγ and LDL cholesterol, adiponectin and tryglycerides may be due to role of PPARγ in the cellular assimilation of lipids via anabolic pathways.

In the present study, a total of 104 pregnant women between 26-37 weeks of gestation were recruited at the Shenzhen People’s Hospital, Shenzhen, China. The age range between 22-39 years old. All the clinical investigations were approved by the Bioethics Committee of the Shenzhen People’s Hospital and were conducted in accordance with the guidelines in the Declaration of Helsinki. Informed consent was obtained from all the recruited subjects. The GDM was diagnosed if one or more plasma glucose levels were elevated during a 75 g, 2 h oral glucose tolerance test (OGTT) according to the criteria set by WHO [37]. Among all the recruited subjects, 66 subjects were diagnosed with GDM, and 38 subjects were healthy pregnant women. The inclusion criteria for this study were the following: no GDM in the previous pregnancy; no family history of diabetes in the first-degree relatives; not taking insulin or oral hypoglycaemic medications; absence of any form of the pre-pregnancy diabetes; no control by diet and exercise before the overnight fast.

The subcutaneous adipose tissue and term placental tissues were obtained from all recruited subjects after Cesarean section at term under a continuous lumbar epidural infusion of local anesthetic in the Department of Obstetrics at the Shenzhen People’s Hospital. The placental villous explants were obtained after the basal and the chorial plates were dissected out from central cotyledons. The adipose tissues and placental villous explants were immediately snap-frozen in liquid nitrogen and stored in -80 °C for further analysis.

Total RNA from adipose tissues or placenta tissues was extracted by using the TRIzol reagent (Invitrogen, Carlsbad, USA) according to the manufacturer’s instructions. Total RNA was reverse transcribed into cDNA by using the Reverse Transcription System Kit (Applied Biosystems, Illinois, USA). The real time PCR was performed with an Applied Biosystems Prims7500 Fast Sequence Detection Sysem using TaqMan universal PCR master mix according to the manufacturer’s instructions (Applied Biosystems). The mRNA expression levels of PPARγ were normalized to GAPDH. The primers of PPARγ were as follow: forward: 5’-GGGATCAGCTCCGTGGATCT-3’; reverse: 5’-TGCACTTTGGTACTCTTGAAGTT-3’. The primers of GAPDH were as follow: forward: 5’-GCACCGTCAAGGCTGAGAAC-3’; reverse: 5’-TGG TGAAGACGCCAGTGGA-3’. The relative expression levels of PPARγ was calculated based on the 2-Δ;ΔCt method.

The proteins from the tissue samples were extracted by using the ice-cold lysis buffer with protease inhibitor cocktails. The extracted proteins were separated with the use of SDS-polyacrylamide gel electrophoresis. Proteins were then transferred to a nitrocellulose membrane and the membrane was incubated with 1% BSA in PBST at room temperature for 1 h. Then the membrane was further incubated with polyclonal rabbit anti-PPARγ antibodies (1:1500; Abcam, Cambridge, USA) and monoclonal rabbit anti-β-actin (1:3000; used as internal control, Abcam) at 4 °C overnight. The membrane was washed and further incubated with HPR-conjugated secondary antibodies. The bands of proteins were detected by using the Western Blotting Luminal Reagent (Thermo Fisher Scientific) according to manufacturer’s instructions.

The recruited subjects gave information on their maternal age and pre-pregnancy weight. The weight and height of patients during the third trimester of pregnancy and the fetal weight were measured by standard methods, and both body again and pre-pregnancy body mass index (BMI) expressed as weight before pregnancy divided by height square were calculated.

All the statistical analysis and graphs plotting were performed by using GraphPad Prism Version 6.0 software. All the data were presented as mean ± standard deviation. Differences between the two groups, including clinical parameters and expression data were analyzed by unpaired Student’s t-test. Relationship between PPARγ mRNA expression and clinical parameters were determined by the nonparametric test of Spearman’s rank correlation coefficient. P values less than 0.05 were considered to be statistically significant.