The aim of the study was to see the diurnal variation of nutrients metabolism and their regulation under the management of large-scaled production. The hepatic transcriptional and serum metabolic studies on circulating nutrient metabolism were investigated in diurnal laying hens. Liver and blood were collected from 36 hens that were slaughtered at 3:30, 7:30, 11:30, 15:30, 19:30, and 23:30 (n = 6), respectively. The serum amino acid, fatty acid and glucose levels, as well as the hepatic transcriptome were analyzed. The results revealed that the circadian clock genes such as Bmal1, Clock, Per1, and Cry2 displayed circadian rhythms in hen livers. The genes related to circulating nutrient transportation, lipogenesis, lipid catabolism, sterol metabolism, and oxidative/anti-oxidative systems also oscillated. However, the nadir of glucose was observed at 7:30 and peaked at 11:30 in the day. Amino acid levels peaked mainly at night, and most amino acids exhibited circadian rhythms based on CircWave analysis. With the exception of undecanoic acid (C11:0), myristoleic acid (C14:1), cis-11, 14-eicosenoic acid (C20:2), and (cis-4, 7, 10, 13, 16, 19-docosahexaenoic acid) C20:3N6 fatty acids, others peaked at 7:30 and 15:30. The results indicated that the hens required more glucose in the early morning. More proteins should be ingested late in the day, since protein catabolism occurred mostly at night. To remove the redundant fats and lipids, fewer should be ingested, especially during the night. All these results would help to design a more accurate nutrition schedule for improving the performance of laying hens in the future.

It has been found that changing the daily rhythm of food ingestion also changes the metabolite rhythms. When changing the daily rhythm of methionine ingestion, with 25% of the total methionine ingested in the morning, and 75% at night, the serum total cholesterol (TC), triglyceride (TG), total protein (TP), and calcium of laying hens were significant lower in the early morning [13]. Based on these findings, we focused on the oscillation of circulating nutriments under normal circadian rhythms, L:D cycle, temperature, and food availability. We also hypothesized that changing the ingestion time of nutrients may affect multiple metabolic processes and energy/nutrient storage, and, in food producing animals, may affect production performance.

Therefore, in the current study, diurnal variation of nutrients and genes related to nutrient metabolism were studied in laying hens using hepatic transcriptomic and targeted metabolomic approaches. Using these approaches, we discovered a 24-h rhythm in circulating nutrient metabolism. The diurnal variations of glucose, amino acids, and fatty acids in serum were also investigated. Our results showed that most of the circulating nutrients displayed a time-of-day dependent pattern, and all diurnal variations were highly correlated with the diurnal rhythm of related transcripts.

RNA-sequencing was used to capture the dynamic temporal changes of liver transcriptomes at 3:30, 7:30, 11:30, 15:30, 19:30, and 23:30 daily (note that hereafter these sampling times will be referred to as C3, C7, C11, C15, C19, and C23 respectively). Six sequencing libraries were prepared and sequenced with the Illumina paired-end method. Approximately 2.5 × 107 raw reads were generated in each group. After removing low quality reads, clean reads were obtained, and > 95% of the clean reads had Phred-like quality scores at the Q20 level (an error probability of 0.01) and GC-contents of approximately 50% (Supplementary Table 1). After RNA sequencing, 74.81–80.24% of the total reads in different samples were mapped to the genome of G. gallus; and 73.47–79.02% of the reads in each sample were uniquely mapped to the genome (Supplementary Table 2). Pearson correlations between biological replicates were greater than 0.8, which indicates high reliability of the experiment and rationality of sample selection (Supplementary Table 3). 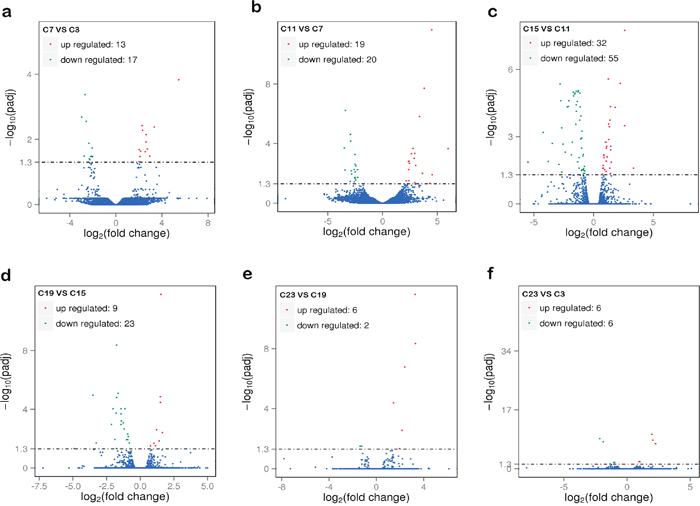 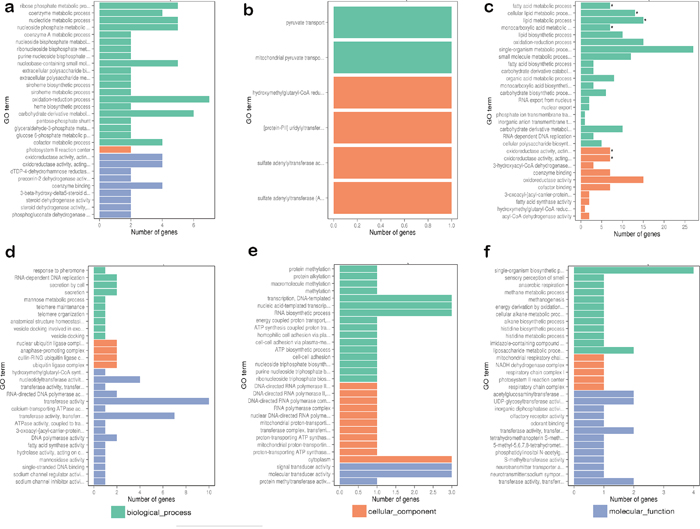 Verification of changes in transcriptomic analysis

To verify the results from RNA-sequencing, 6 differentially expressed transcriptions namely ATP-binding cassette transporters G5 (ABCG5), cytochrome P450 1A4 enzyme (CYP1A4), Hexokinase Domain Containing 1 (HKDC1), heat shock 70 kDa protein 5 (HSPA5), β3 polypeptide chain of laminin 5 (LAMB3), and organic anion transporting polypeptide 2B1 (SLCO2B1) were randomly selected for RT-PCR analysis. Our results showed that the detection of relative up- and down-regulation of these mRNA levels by RT-PCR was in agreement with the transcriptomics results (Figure 3). 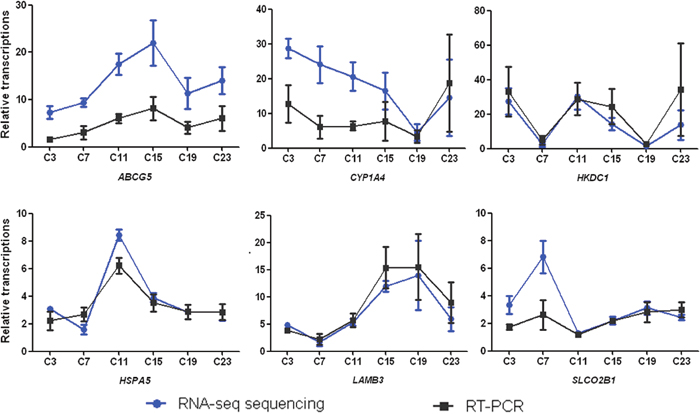 Diurnal variation of glucose, amino acids, and fatty acids in serum is shown in Tables 1 and 2. The levels of glucose, amino acids, and most of the fatty acids in serum of laying hens fluctuated in a day. The nadir of glucose was at C7, and glucose reached a peak at C11. Subsequently, glucose remained at a relatively constant concentration in the afternoon and night. However, the highest levels of amino acids were found at night, at C23 or C3. Amino acid levels decreased in the day, and most of the amino acids reached a nadir at C15. With the exception of fatty acids, undecanoic acid (MAG C11:0), myristoleic acid (C14:1), cis-11, 14-eicosenoic acid (C20:2), and (cis-4, 7, 10, 13, 16, 19-docosahexaenoic acid) C20:3N6, which did not vary diurnally, fatty acids had two peak concentrations at C7 and C15. After “CircWave” analysis, the diurnal variation of amino acids including Trp, Ser, Arg, Asp, Thr, Val, Ala, Ile, Pro, Leu, Cys, and Phe exhibited circadian rhythms in the serum of hens.

1 The amino acids that of p >0.05 after ANOVA analysis were not involved.

Table 2: Diurnal variation of glucose and fatty acids in serum

The diurnally varied genes related to circadian rhythms are shown in Figure 4. After CircWave analysis, the genes, including Bmal1, Clock, Per1 and Cry2, exhibited circadian rhythms in the livers of hens. Meanwhile, the transcripts of enzymes involved in protein catabolism, i.e., peptidase and aminotransferase peaked at C3 (Figure 5a), However, the transcripts that were encoded by the genes involved in lipid and fatty acid metabolism had two nadirs, in contrast to the free fatty acid levels in serum (Figure 5b). Moreover, the transporters related to nutrient transport in solute carrier family included SLC2A5, SLC16A1, SLC26A2, SLC7A2, SLC38A2, and SLC30A10 (Figure 5c). These genes are involved in glucose/oligosaccharides, monocarboxylic acid, sulfate anion, cationic amino acid, and sodium-coupled neutral amino acid transportation, respectively. 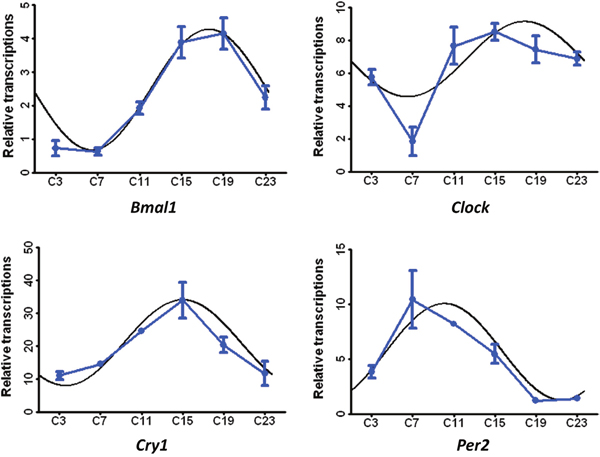 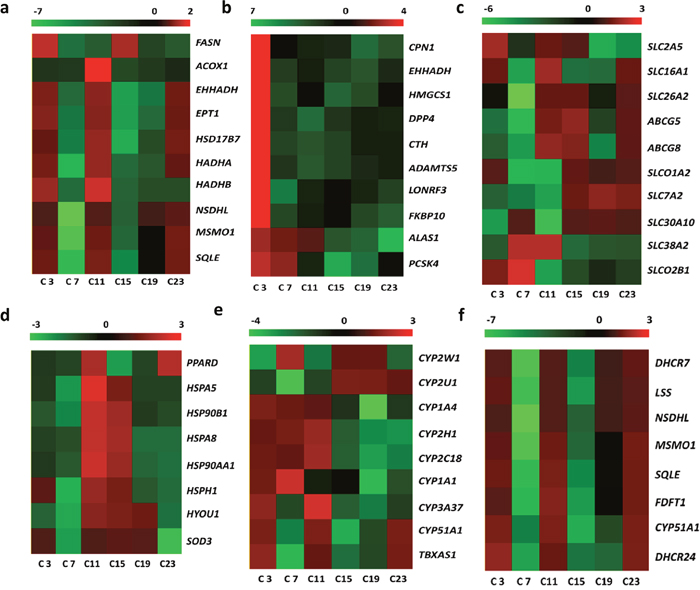 KEGG pathway analysis of differentially expressed genes showed that only a small number of genes were annotated to the KEGG pathways and most of these were related to steroid biosynthesis. Therefore, the transcripts related to dynamic synthesis of steroids were clustered in Figure 3f. The enriched genes displayed time-of–day rhythms. One of the steroids, cholesterol, also displayed time-of-day rhythms.

The 24-h rhythms of targeted metabolites, including glucose, fatty acids, and amino acids were investigated in laying hens during egg production. Except for fatty acids C11.0, C14.1, C20.2, and C20.6N3, all metabolites investigated displayed time-of-day rhythms. The variation of these metabolites was closely related to the genes for transportation, lipogenesis, lipid catabolism, sterol metabolism, as well as oxidative/anti-oxidative systems in the liver. These findings are partially consistent with results found in nocturnal mice, where expression of metabolic enzymes, transport systems involved in cholesterol metabolism, amino acid regulation, drug and toxin metabolism, the citric acid cycle, and glycogen and glucose metabolism varied diurnally in response to Clock control, but the trends of individual metabolites were different [2, 7].

The circadian clock has been reported to regulate glycometabolism, and glucose has been shown to phase-shift the clock in peripheral tissues in various animals [15]. In laying hens, the plasma glucose concentrations peaked at C11 and reached a nadir at C7. These trends were similar to those found in human adolescents, where glucose significantly increased starting at 5:30 [16–17]. However, glucose reached a peak in the middle of the night in nocturnal mice [18]. In diurnal horses and sheep, plasma glucose concentrations peaked around the middle of the night and at dusk [19]. The fluctuation of glucose concentrations in plasma mainly results from the coordinated regulation of glucose input (food intake, hepatic glucose production) and its utilization (uptake by skeletal and cardiac muscles, and adipose tissues). Since energy requirements of organisms fluctuate temporally throughout the day, diurnal oscillations in glucose metabolism are partially owing to daily changes in sleep/wake cycles and glucose utilization [20]. In our study, the glucose concentration in blood reached its nadir in the morning after consumption, and increased immediately after ingestion, suggesting the diurnal variation of glucose is related to feeding/fasting cycles.

The effects of the circadian clock on proteometabolism have not been extensively studied in diurnal animals. In the current study, we found that most of the amino acids in plasma and the transcripts related to protein catabolism peaked at night in hens. Moreover, it has been reported that the transcription of amino acid transporters, including SLC1A2, SLC6A20, SLC7A1, and SLC6A14 was higher at 23:30, 3:30, and 7:30 than at 11:30, 15:30, and 19:30 in piglets [21], suggesting amino acid uptake also peaked at night. Similar results were found in mice where amino acid metabolism-related biochemicals peaked at night [2]. Together, both the diurnal and nocturnal study animals displayed similar rhythms in proteometabolism. The regulation of amino acid metabolism by the circadian clock is not simply an indirect effect of its regulation of glucose metabolism [2], but also directly affected by the diurnal variation of protein catabolism and amino acid uptake.

Collectively, our results showed that the de novo synthesis of steroid hormones, and the metabolism of glucose, proteins, lipids, as well as oxidative and anti-oxidative enzymes displayed time-of-day rhythms. Since nutritional challenges could reprogram the circadian clock, these findings are of great importance in animal precision nutrition, and prevention of nutritional and metabolic diseases related to the circadian clock.

A total of 60 brown Hy-line laying hens were selected at 41 wk (Xingjia Inc., Changsha, China) and housed individually in 39 × 35 × 38 cm wire cages. Hens were kept under a 16L:8D cycle from 06:00 to 22:00 with ad libitum access to corn-soybean-based diets (NRC, 1994) [28] (Supplementary Table 4) and drinking water for 70 d to acquire the same biological rhythm. During these days, eggs were collected and counted daily at 07:30, 12:00, and 19:30 to calculate diurnal egg-laying rates. Subsequently, blood samples (n = 6 per sampling time point) of the hens were collected intravenously at 4-h intervals in a daily cycle starting at 03:30, and then livers were harvested, rinsed in PBS, and snap frozen in liquid nitrogen for RNA sequencing. Particularly, the heads of the chickens that slaughtered at 3:30 and 23:30 were with lightproof bags to avoid light exposure.

Liver samples of 36 hens that were slaughtered at 3:30, 7:30, 11:30, 15:30, 19:30, and 23:30 (n = 6 at each sampling time) were used for total RNA isolation. After quantification, the six samples in each group were pooled into three biological replicates and submitted for DGE experiments by Novogene Bioinformatics Technology Co. Ltd (Beijing) on an Illumina Hiseq platform, and 125/150 bp paired-end reads were generated. Total reads were mapped to the Gallus gallus genome in ensemble (http://www.ensembl.org/Gallus_gallus/Info/Index) using Bowtie v2.2.3 and TopHat v2.0.12 software. HTSeq v0.6.1 was used to count the read numbers mapped to each gene based on the length of the gene and read count mapped to this gene. Differential expression analysis of two groups was performed using the DESeq R package (1.18.0). The resulting P-values were adjusted using Benjamini and Hochberg’s approach for controlling the false discovery rate. Genes with log2 fold change >1 and adjusted P-value < 0.05 found by DESeq were assigned as differentially expressed.

Quantitative real-time polymerase chain reaction (RT-PCR) was performed to validate the results of transcriptome sequencing and determine the expression levels of the selected genes in livers in different sampling periods. Fold differences in expression levels were calculated using the 2-ΔΔCtmethod. Primers and amplicon sizes are listed in Supplementary Table 5.

14. Froy O. The relationship between nutrition and circadian rhythms in mammals. Front Neuroendocrinol. 2007; 28: 61-71.