The precise excision of introns from precursor mRNAs in eukaryotes is performed by the spliceosome [1], a macromolecule composed of small nuclear RNAs associated with proteins [2]. RNA splicing, which includes constitutive and alternative splicing, is a post-transcriptional process necessary to produce mature RNA [3]. Constitutive splicing is the process of removing introns from pre-mRNA, whereas alternative splicing is the process of including or excluding exons in different combinations to create a diverse array of mRNA transcripts from a single pre-mRNA fragment. SF3b is a heptameric protein complex of the U2 small nuclear ribonucleoprotein that is essential for pre-mRNA splicing. Mutations in the largest SF3b subunit, SF3B1/SF3B155, are linked to cancer and lead to alternative branch site selection [4, 5]. The SF3B1 gene encodes subunit 1 of the splicing factor 3b, which is important for anchoring the spliceosome to the precursor mRNA [2], and is the most commonly mutated gene found in myelodysplastic syndrome [6]. The frequency of SF3B1 mutations is particularly high among the unique subtypes of myelodysplastic syndrome that are characterized by increased ring sideroblasts, in which mutation frequencies of 66.7–79% have been reported [2, 7, 8]. SF3B1 knockout mice are embryonic lethal at very early developmental stages, whereas SF3B1 heterozygous knockout mice (SF3B1+/-) exhibit mild skeletal alterations [9]. SF3B1 was found to be the second most frequently mutated gene in chronic lymphocytic leukemia (CLL) at 5–15%; SF3B1 mutations are less common in the early stages of CLL and become more prevalent in advanced disease where they tend to be associated with poor prognosis. The K700E mutation accounts for more than 50% of the variants observed, and additional codons 666, 662, and 625 were found to be hot spots for mutation [2, 10]. In addition to hematological malignancies, lower frequencies of SF3B1 mutation are also found in solid tumors such as breast cancers (1.8%), pancreatic carcinoma (4%), uveal melanoma (9.7%), and endometrial cancers (percentages not reported) [9]. Patients with uveal melanoma who harbor SF3B1 mutations are reported to have better prognoses [11, 12].

Human breast cancers are heterogeneous, and patients have varying clinical outcomes based on their diagnostic and prognostic parameters. These include morphological assessment, basal-like phenotype, and the expression statuses of estrogen receptor (ER), human epidermal growth factor receptor 2 (HER2), and progesterone receptor (PR). [13–15]. The genomic landscape of breast cancer is complex, and somatic mutations related to this disease have been extensively characterized.

Frequency of SF3B1 mutation in carcinoma

Analysis of the cBioPortal for Cancer Genomics (www.cbioportal.org/) revealed 114 SF3B1 K700E/R hotspot mutations across different types of carcinoma, 54 of which were in invasive breast carcinoma. Four patients with invasive breast carcinoma among 27 with various carcinoma types carried the SF3B1 K666E/M/N/Q/T hotspot mutation (Figure 1A). In terms of mutation frequency among different carcinomas, we found that the SF3B1 mutation ranged between 5% and 10% in breast cancer (Figure 1B). SF3B1 expression was demonstrated in different TCGA carcinoma study groups (Figure 1C). The spliceosomal protein SF3b155 structure is shown in Figure 1D [1, 4]. 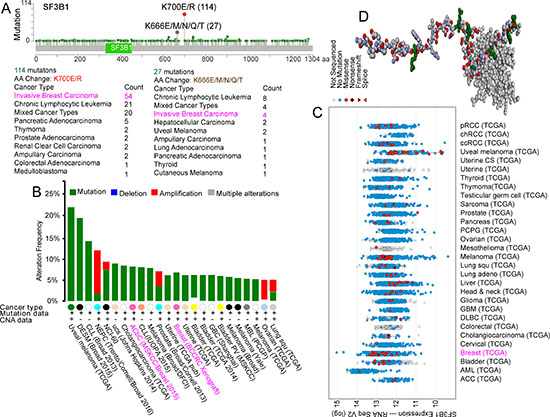 Figure 1: Frequency of SF3B1 mutations in carcinoma. SF3B1 K700E/R and K666E/M/N/Q/T hotspot mutations (A), SF3B1 mutations frequency (B), and SF3B1 expression with mutations (C) in different types of carcinoma. Shown is the structure of the SF3b155 peptide complex derived from the cBioPortal for Cancer Genomics (D). [1, 4].

The median age of breast cancer patients at diagnosis was 60.09 years (range, 22–96 years). There were 2061 and 1221 patients < 65 years and ≥ 65 years, respectively. The Nottingham prognostic index (N-Index) was only found in the METABRIC data sets. The N-Index was < 4.05 in 1075 patients and ≥ 4.05 in 910 patients. Eighty-one of 3817 patients (2.12%) carried SF3B1 mutations. The clinical characteristics of the breast cancer patients are shown in Table 1. Cox univariate analysis showed that the prognostic factors significantly associated with overall survival (OS) were age, N-Index, ER status, PR status, HER2 status, menopausal status, PAM-50 and claudin-low subtype, neoplasm histologic grade, breast cancer type, and tumor stage. However, SF3B1 mutations and breast cancer laterality were not associated with OS.

Table 1: Clinical characteristics of breast cancer patients and their correlation with overall survival 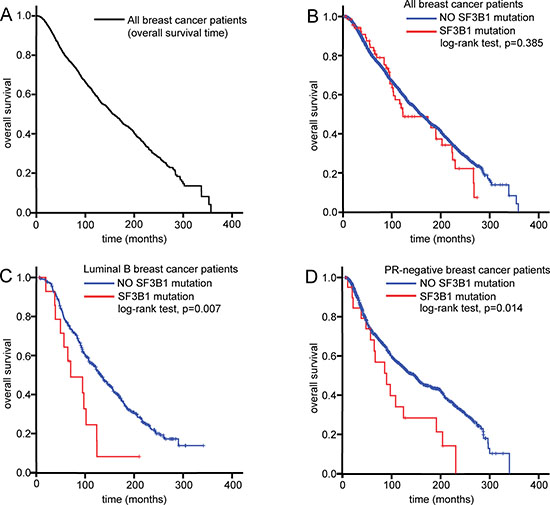 Table 2: SF3B1 mutation as a prognostic factor for overall survival in all patient subgroups 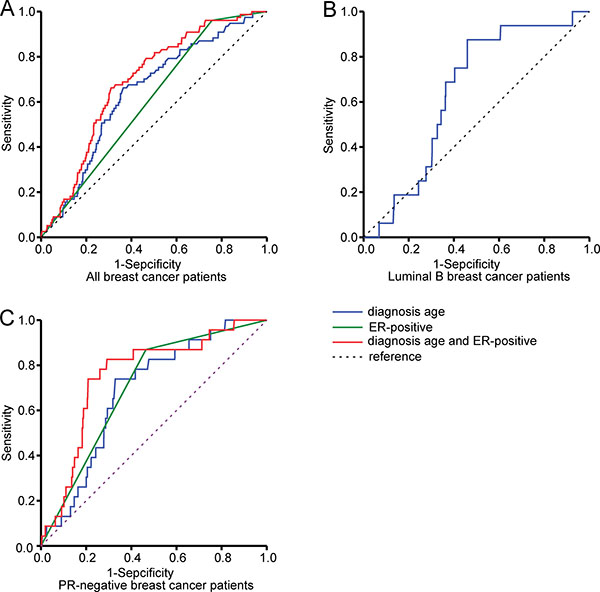 SF3b is essential for pre-mRNA splicing, and mutations in its largest subunit (SF3B1/SF3b155) are linked to cancer [4, 16, 17]. The impact of SF3B1 mutations on patient outcomes varies according to tumor type; for instance, it is associated with poor outcomes in CLL patients but with good prognoses in uveal melanoma patients [8, 11, 18–20]. Human breast cancers are heterogeneous; Blows et al. showed that ER-positive breast cancer patients had varied outcomes and responses to therapy [21]. A study by Nik-Zainal et al. in which whole genomes from 560 breast cancers and non-neoplastic tissue were sequenced revealed 3479652 somatic base substitutions, 371993 small indels, and 77695 rearrangements [22]. The high number of gene mutations and diversity of genomic drivers may explain this disease’s clinical heterogeneity. An SF3B1 mutation can cause abnormal pre-RNA splicing that can lead to tumorigenesis, tumor drug resistance, or others detrimental features [20, 23, 24]. Therefore, SF3B1 mutation may be useful as a prognostic indicator in different tumors.

The following parameters were investigated for their role in the prognosis of patients with breast cancer: age at diagnosis, N-index, ER status, PR status, HER2 status, menopausal state, PAM50 and claudin-low subtype, histological grade, breast cancer type, tumor stage, and primary tumor laterality. Additionally, SF3B1 was also analyzed as a prognostic marker. We divided the age and N-Index into dichotomous variables (< 65 vs. ≥ 65 years and < 4.05 vs. ≥ 4.05, respectively); these cutoff values were based on OS.

We thank all patients involved in this study. We also thank cBioPortal for providing a free website that allows the retrieval of reliable public data.