Stroke is a major cause of death and disability worldwide as well as a major burden on public health worldwide [1]. Within the globe in 2010, roughly 10% of the 52769700 deaths and about 4% of the 2490385000 disability adjusted life years (DALYs) were due to stroke, with developing countries becoming more severe than in developed countries [2]. Globally, stroke is projected to be the fourth most common cause of premature death and disability by the year 2020 [2]. Stroke is a multifactorial disease associated with a variety of factors. In previous studies, hypertension, diabetes, obesity, smoking and advanced age were identified as risk factors for stroke [3]. Through the study of twins and family history, family inheritance is also closely related with stroke [4]. Simultaneously, Genetics as a risk factor for stroke have also been confirmed, and some genetic polymorphisms such as MTHFR, ApoE [5], P-selectin and interleukin-4 gene [6] have been shown to be associated with the risk of stroke.

Telomere, as a protective structure at the end of chromosome, plays a crucial role in maintaining the stability of the genome. The shortening of telomere length is related to cell senescence and apoptosis. Many studies have confirmed that telomere length is associated with stroke risk, shortening telomere length increases the risk of stroke [7–9]. Genetic polymorphisms of telomere-related genes such as ACYP2, TSPYL6, and TERT have been reported to be associated with stroke [10, 11]. Regulator of telomere elongation helicase 1(RTEL1)belongs to the superfamily 2 (SF2) helicase [12], is an essential helicase that plays an important role in maintaining telomere length and genomic stability [12, 13] RTEL1 gene, located in chromosome 20q13.3, plays an important role in DNA repair and apoptosis [14]. The single nucleotide polymorphism (SNP) of RTEL1 gene has been confirmed to be associated with telomere-related diseases such as Hoyeraal Hreidarsson Syndrome [15], glioma [16], lung cancer [17] and atopic dermatitis [18]. However, so far, no studies have investigated the association between SNPs in the RTEL1 gene and the risk of stroke. In this case-control study, we genotyped five SNPs in RTEL1 gene: rs6089953, rs6010620, rs6010621, rs4809324 and rs2297441, and performed a comprehensive association analysis to identify SNPs associated with the risk of stroke in Chinese population.

A total of 400 patients with stroke and 395 healthy individuals were enrolled in the study. The demographic characteristics of the participants are shown in Table 1.The Pearson’s test showed that there was no statistical difference in sex distribution between case group and control group (p > 0.05). The mean age of the participants was 66.83 years in the case group and 48.67 years in the control group.

Table 1: Demographic characteristics of the patients with stroke and control individuals

P value of gender was calculated by Welch’s t test

P value of age was calculated by Pearson’s χ2 test.

Association between SNPs in the RTEL1 gene and Stroke

Table 2: Basic information of candidate SNPs in this study 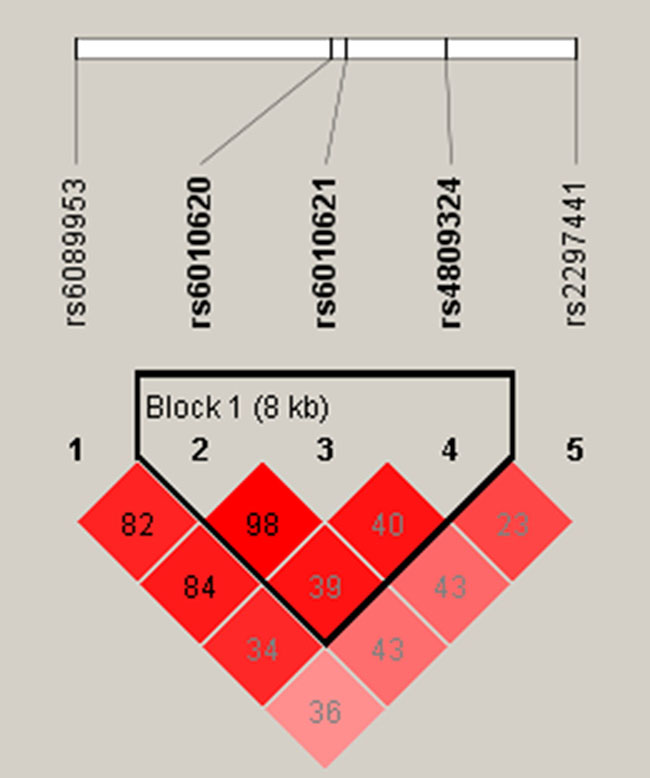 Figure 1: Haplotype block map for all the SNPs of the RTEL1 gene.

Table 4: The association between the single-nucleotide polymorphisms and stroke in Genotype model

Table 5: Haplotype frequency and their association with stroke in case and control subjects

In this study, we investigated the associations between SNPs in the RTEL1 gene and stroke risk in the Chinese population. Among the five SNPs we selected, four SNPs (rs6089953, rs6010620, rs6010621 and rs2297441) may be associated with the risk of stroke in the Chinese Han population.

Stroke is a multifactorial disease associated with a variety of factors. Among them, the growth of age and stroke risk is positively correlated. Vascular cell senescence contributes to endothelial dysfunction [19], which can cause atherosclerotic plaque progression [20], further resulting in stroke [21]. It has been demonstrated in previous studies that telomere length shortening is associated with stroke [7–9]. The telomere length decreases continuously with aging due to the decrease of telomerase activity [22].The length of telomeres is also affected by many factors, including Eating habits and lifestyles [23], body mass index (BMI)and smoking [24],which genetic factors in different races occupied 36% -84% [25]. RTEL1 is the essential helicase for telomere maintenance and the regulation of homologous recombination, and plays an important role in maintaining telomere length [26]. The RTEL1 gene, as an important gene for maintaining telomere length, has been confirmed to be associated with telomere-related diseases such as Hoyeraal Hreidarsson Syndrome, glioma, lung cancer and atopic dermatitis [15–18], But so far, no studies have investigated the association between SNPs in the RTEL1 gene and the risk of stroke. Based on our experimental results, we conclude that perhaps the SNPs in the RTEL1 gene can cause cell apoptosis by influencing the length of telomere, and then causes endothelial dysfunction, and finally affects stroke.

Recent studies have reported that the genetic polymorphisms of telomere-related genes such as ACYP2,TSPYL6,and TERT are associated with stroke by affecting telomere length [10, 11], including rs11125529, rs12615793, rs843711, rs11896604, rs843706 within both ACYP2 and TSPYL6, rs17045754 in ACYP2 gene, and rs2736122, rs2853668 in TERT gene. In our experimental results, We found that four SNPs (Rs2297441, Rs6089953, Rs6010620, and Rs6010621) were associated with the risk of stroke in this population. It may be possible to show that the mechanism of the SNPs in the RTEL1 gene impact on stroke may be the same as other telomere - related genes. Because in previous studies there was a lack of research and reporting on the association between the SNPs in the RTEL1 gene and Stroke, we have no way to compare with other data. The exact mechanism for explaining the relationship between the SNPs in the RTEL1 gene and stroke cannot be determined from our study alone, we should do further functional experiments to verify.

There are several limitations of this study. First, the sample size is not large enough, Second, the clinical subtypes of stroke were not considered in this study. In addition, some influencing factors such as eating habits, living environment, and Smoking history are not considered. These limitations will be addressed in future research.

A total of 400 patients with stroke and 395 healthy individuals were enrolled in the study. The characteristics of the participants are shown in Table 1. All participants are genetically unrelated Han Chinese. The stroke status of each case was determined by Magnetic Resonance Imaging and their clinical records as confirmed by two clinicians. Healthy controls without history of stroke and neurological impairments were recruited from healthcare center of our hospital. This study was conducted in accordance with the Chinese Department of Health and Human Services regulations for the protection of human research subjects. Informed consent was obtained from all participants.

Pearson’s χ2 test and Welch’s t test were used to evaluate the differences in the demographic characteristics between the cases and controls [32]. The Hardy-Weinberg equilibrium of each SNP was assessed in order to compare the expected frequencies of the genotypes in the control patients. All of the minor alleles were regarded as risk alleles for stroke susceptibility. To evaluate associations between the SNPs and risk of stroke in the four models (genotype, dominant, recessive, and additive), ORs and 95% CIs were calculated using unconditional logistic regression analysis [33]. In multivariate analyses, unconditional logistic regression was used to assess the association between each SNP and the risk of stroke [33]. Linkage disequilibrium analysis and SNP haplotypes were analyzed using the Haploview software package (version 4.2) and the SHEsi software platform (http://www.nhgg.org/analysis/) [34]. All statistical analyses were performed using the SPSS version 17.0 statistical package (SPSS, Chicago, IL, USA) and Microsoft Excel. A p < 0.05 was considered statistically significant and all statistical tests were two-sided.

In summary, we have identified four new associations between the SNPs (Rs6089953, Rs6010620, Rs6010621 and Rs2297441) in RTEL1 gene and stroke. Our results suggest that these SNPs may serve as molecular markers of stroke susceptibility for primary prevention of stroke during clinical treatment. At the same time, this study provides a new idea for future research on association between single nucleotide polymorphisms and Stroke.

This work was supported by Natural Science Foundation of Hainan Province (Grant Number: 817334). The authors are also grateful to the patients and control individuals for their participation in the study. We thank the clinicians and hospital staff who contributed to sample and data collection for this study.

32. Adamec C. Example of the use of the nonparametric test. Test X2 for comparison of 2 independent examples. Ceskoslovenské Zdravotnictví. 1964; 12:613–619.