Peripheral nerve defects, but not artificial nerves, are repaired by endogenous cells. We examined cell activity during the repair process in the presence of autologous nerves and artificial preparations in order to guide future artificial nerve fabrication. PLGA tubes, nerve scaffolds comprising a PLGA tube plus 6,000 fibroin fibers, or autologous nerves were implanted into 10 mm rat sciatic nerve defects (n = 60 per group). Over a period of 1-20 weeks after nerve grafting, sections were stained and imaged to distinguish the cell types present and we quantified the recovery of motor and sensory function in the surgically implanted limb. We observed a decreasing trend in inflammatory cell and fibroblast counts over time which ranked in magnitude as: (PLGA group > nerve scaffold > autologous nerve> sham) and an opposite trend in Schwann cell counts. Differences in withdrawal time from hot water and static sciatic index (SSI) indicated that, after repair, sensory and motor function were best in the sham group, followed by the autologous group, the nerve scaffold group, and the PLGA group. These findings indicate that the inflammatory reaction is significant in the first two weeks after nerve grafting, followed by the rebirth of fibroblasts and Schwann cells, which guide axon regeneration. This inflammatory response was a fundamental stage of peripheral defect repair, but a weaker inflammatory response corresponded to better recovery of sensorimotor functional.

Tissue injury elicits an inflammatory response which has positive attributes for injury repair [24]. Inflammatory responses require inflammatory cells to migrate within and through the vasculature [25]; in addition, integrins are associated with the migration of eosinophils and the activation of macrophages [26], and fibroblasts and Schwann cells are required for nerve regeneration [1, 3, 11]. A peripheral nerve defect actually will be repaired by the patient’s own cells with the assistance of an artificial nerve but not by the artificial nerve itself. Observation of the performance of inflammatory cells, Schwann cells, and fibroblasts in the process of peripheral nerve defect repair will guide the development of future artificial nerve preparations.

To observe the cell performance during the peripheral nerve defect repair with an artificial nerve, a nerve scaffold comprising 6,000 fibroin fibers considered as micro-tracks was prepared, mirroring the 6,000 nerve fibers in rat sciatic nerve. Nerve scaffold, PLGA tube, and autologous nerve were implanted into a 10mm sciatic nerve defect in rats, while a sham operation group with implanted autologous nerve and PLGA tube were used as controls. The recovery of sensory and motor function in surgically implanted limbs were tested according to methods reported in the literature [5, 7]. Inflammatory cells, Schwann cells, and fibroblasts were distinguished by immunofluorescence and hematoxylin and eosin (HE) staining.

To observe the result of morphological repair, a nerve scaffold assembled with a PLGA tube and fibroin fibers was grafted to a 10 mm rat sciatic nerve defect. As shown in Figure 1A, at 6 weeks post-grafting (wps), the nerve scaffold achieved proximal and distal fusion with the sciatic nerve in the rat recipients. There were no neoplastic tissues on the graft surface and no adhesions with adjacent muscle tissues, indicating that this nerve scaffold had good biocompatibility.

To observe the inflammatory reaction in the nerve scaffold, sections obtained at the first and second week after grafting were stained with immunofluorescence for Integrin-α (red) and a HE staining to display inflammatory cells, while immunofluorescence staining of NGFR P75 (green) and fibronectin (green) was carried out to display Schwann cells and fibroblasts, respectively. The autologous and PLGA tube groups served as controls.

At the first two weeks post-grafting, the cross sections of autologous and nerve scaffold groups were fully filled with cells (Figure 2), while the PLGA tube group was empty (Figure 2C1 and 2C2). The expression of integrin was associated with inflammatory cell activity [11]. Integrin-α immunofluorescence staining results (Figure 2) show that inflammation was significant in the first two weeks post-surgery, but there was a weakened tendency from the first to the second week. Inflammatory cells can be distinguished by the shape of their nuclei. From a film preparation smeared with the content of PLGA tube at 2 weeks post-grafting, the observed inflammatory cells (Figure 2C3) are basophiles, eosinophiles, leukocytes, lymphocytes, and monocytes.

Observation of Schwann cells, axons, and fibroblasts after grafting 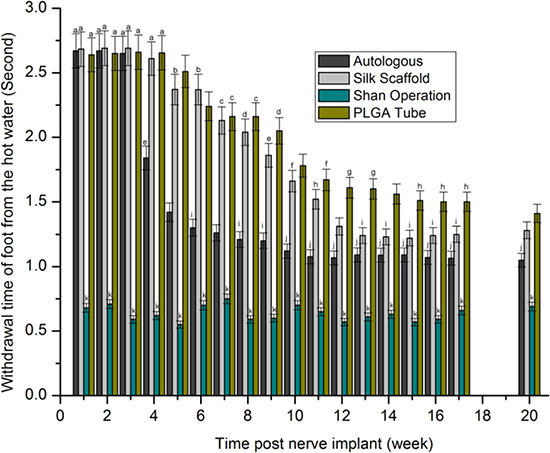 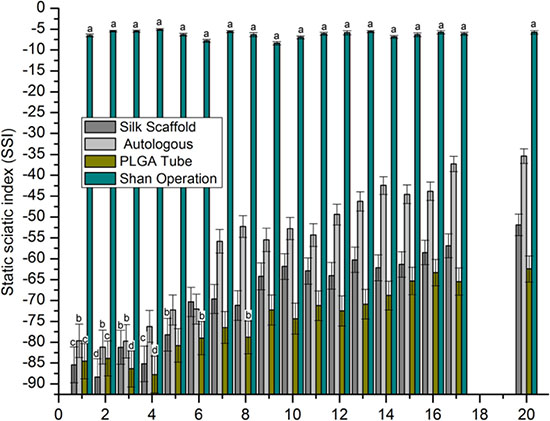 Observation of cell activity during the process of peripheral nerve defect repair may help guide the preparation of an artificial nerve. A population of 5 types of circulation inflammatory cells was observed in the first two weeks after nerve grafting. This indicated that an inflammatory response was a fundamental stage of peripheral defect repair.

Some questions remain to be addressed in the future: 1) to what extent is the inflammatory response beneficial for peripheral nerve repair and how can we regulate it. 2) when and how many fibroblasts appear in an artificial nerve after grafting is proper for peripheral never effect repair and how to control it. 3) How to improve the characteristic of a nerve scaffold comprising micro-channels to achieve a better peripheral nerve effect repair result though it was more effective than a tube.

Poly(lactic-co-glycolic acid) or PLGA (80:20, Sigma, USA) was dissolved in chloroform to prepare a 5% (W/V) solution. The resulting solution was placed in a glass petri dish for 12h to form a PLGA film. The resulting film was wound several times around a stick (with an outer diameter of 1.8 mm) to prepare a PLGA tube.

Sprague-Dawley rats, weighing 250 ± 10 g, were provided by the Experimental Animal Centre of the Third Military Medical University affiliated to the People’s Liberation Army (PLA), China. One hind limb on each rat was randomly selected for artificial nerve grafting. Preparation of the 10 mm sciatic nerve defect animal model and nerve grafting surgical implantation were carried out in accordance with a previously described method [9]. Briefly, the nerve graft (n = 60/group) was implanted to bridge the 10 mm sciatic nerve defect.

In accordance with previous studies [7], all rats were immobilized at 1–20 weeks post-surgery (wps), to ensure the surgically implanted limb was immersed in a hot water bath at a constant temperature of 50°C. The time required to retract the limb in response to this heat stimulus was recorded to assess the recovery of the sensory function in the operated rats. The time of non-surgically implanted limb retraction was also recorded and calculated as an average from the data obtained from all experimental rats: the mean value was considered as the control. In accordance with literature [5], the SSI was measured in rats at 1–20 weeks after surgery to assess the recovery of the motor function in the operated rats.

All motor and sensory function test data were statistically analysed using SPSS software to compare their differences among the different time points in the same group or among groups at the same time point and illustrated using Origin 8.0 software. All graphs were edited for display using Adobe Photoshop 7.0.

This work was supported by the Fund of the Chongqing Agricultural Development (No. 16403), and the National Natural Science Foundation of China (No. 31271036).