Germline mutations in BRCA1 and BRCA2 genes (BRCA1/2) predispose to hereditary breast and ovarian cancer syndrome (HBOC), and their dysregulation increases the risk of cancers. The detection of pathogenic BRCA1/2 variants is essential for the diagnosis and prevention of HBOC, and for offering treatment decisions for patients. Therefore, there is a growing demand for the development of accurate, rapid assay systems that simultaneously detect pathogenic variants and copy number alterations. Here, we tested Thermo Fisher Scientific’s newly developed Oncomine® BRCA1/2 Panel. We showed that all mutations in standard reference DNA were detected with high accuracy, and that values of allelic fractions were detected with high concordance (R2 = 0.9986). The Oncomine® BRCA1/2 Panel detected 21 pathogenic germline variants in 147 patients with breast and/or ovarian cancer, of which 20 were detected by the previously-launched Ion AmpliSeq™ BRCA1/2 Panel, except for one frameshift mutation. The Oncomine® BRCA1/2 Panel precisely captured one additional frameshift mutation, which is difficult to detect because of the homopolymer site. Large genomic deletion was identified in one sample, which was previously detected by multiplex ligation-dependent probe amplification. Oncomine® BRCA1/2 Panel could accurately detect pathogenic variant and copy number alteration, and be an alternative assay to investigate BRCA1/2 germline and somatic mutations.

BRCA1 and BRCA2 (BRCA1/2) are tumor suppressor genes with roles in the DNA repair process through their function in homologous recombination in response to DNA double-stranded breaks [1–5]. Germline heterozygous mutations in either BRCA1 or BRCA2 were previously shown to increase the overall risk of breast and of ovarian cancer by 40%–65% and 15%–45%, respectively [6, 7]; therefore, genetic testing of BRCA1/2 is used to diagnose hereditary breast and ovarian cancer syndrome (HBOC) [4, 7–9].

For cancer preventive options, risk-reducing mastectomies and salpingo-oophorectomies are effective in carriers of pathogenic BRCA1/2 mutations [10]. The loss of function of BRCA1/2 sensitizes cells to poly (ADP-ribose) polymerase (PARP) inhibitors [2, 11, 12], and findings from clinical trials have resulted in the PARP inhibitor olaparib being approved for maintenance treatment of women with BRCA1- or BRCA2-mutated high-grade serous ovarian cancer, fallopian tube, or primary peritoneal cancer [11, 12]. Therefore, the genetic analysis of BRCA1/2 is important for prevention, therapeutic decision-making, and proper management of breast and ovarian cancer patients.

Diagnostic testing for pathogenic BRCA1/2 mutations is often performed by Sanger sequencing to identify single nucleotide alterations, insertions, and deletions, while large genomic alterations may be detected by the multiplex ligation-dependent probe amplification (MLPA) assay. Sanger sequencing and MLPA are considered gold standard methods to determine the BRCA1/2 mutation status. BRCA1/2 mutations are scattered throughout the entire coding region, and BRCA1/2 proteins are relatively large (BRCA1: 1863, and BRCA2: 3418 amino acids) [1]. Because BRCA1 and BRCA2 gene contains 24 and 27 exons respectively, primer pairs or probes need to be designed at each site for Sanger sequencing and MLPA assay. When DNA samples were analyzed from many patients, it is necessary to analyze higher number of PCR amplicons. Therefore, these procedures are laborious and time-consuming.

Next-generation sequencing enables large numbers of nucleotide sequences of multiple samples to be simultaneously determined [13]. The enrichment of targeted regions is mainly conducted by PCR amplification or DNA capture hybridization, and targeted sequencing of genomic regions of interest can then be used for diagnosis in a clinical setting. With the advent of this technology, the genetic bases of cancers, Mendelian diseases, and congenital diseases have been revealed [14].

We previously analyzed the entire coding regions of BRCA1/2 in patients with breast and ovarian cancer using the Ion AmpliSeq™ BRCA1/2 Panel, which is based on a PCR amplification method [15, 16]. Recently, Thermo Fisher Scientific has launched a new panel: the Oncomine® BRCA1/2 Panel. In this study, we examined the performance of this panel using standard reference DNA with known BRCA1/2 mutations and variant allelic fractions to assess the accuracy of germline and somatic mutation detection. Additionally, we used the Oncomine® BRCA1/2 Panel to detect germline mutations and copy number alterations in randomly-selected patients with breast and/or ovarian cancer, and compared our findings with the sequencing results of the Ion AmpliSeq™ BRCA1/2 Panel. 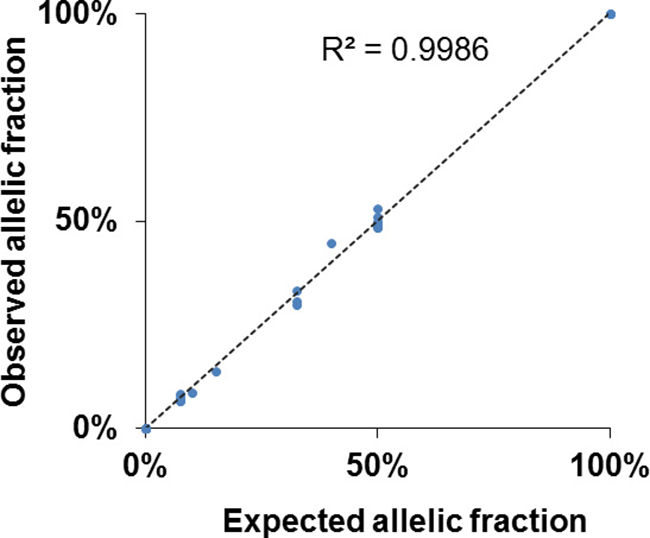 Comparison of the panel designs and performance 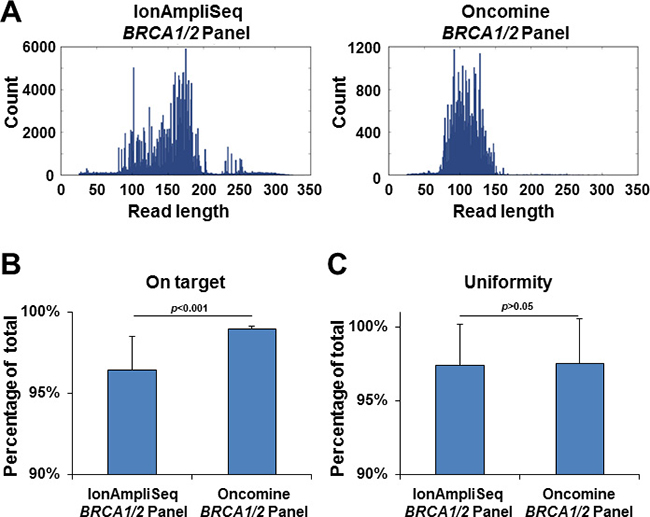 Figure 2: Next-generation sequencing read length and quality control. (A) Histogram of sequencing read lengths using the IonAmpliSeq™ BRCA1/2 Panel (left) and Oncomine® BRCA1/2 Panel (right). This is a representative image from the sequencing data. (B) Percentage of mapped reads that were aligned over the target region. P-value was calculated by the Student’s t-test. (C) Percentage of target base coverage at least >0.2× the mean coverage depth. P-value was calculated by the Student’s t-test.

Comparison of the BRCA1/2 panels 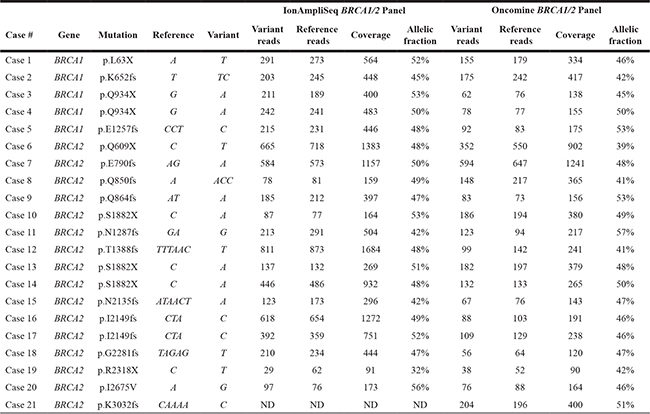 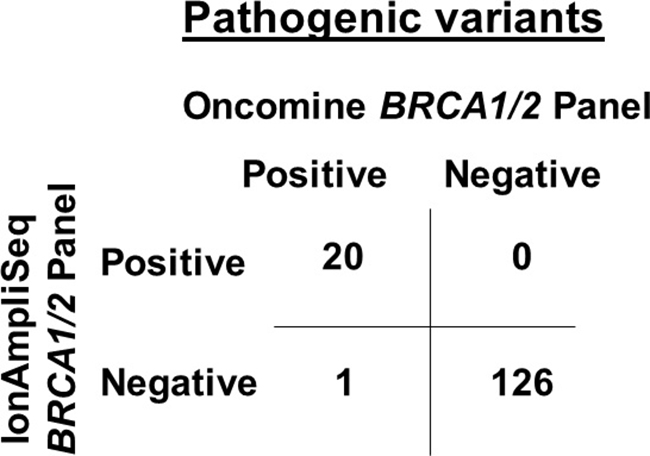 Figure 3: Comparison of pathogenic BRCA1/2 variants calling between the IonAmpliSeq™ BRCA1/2 Panel and Oncomine® BRCA1/2 Panel from 147 patients with breast and/or ovarian cancer. An overall agreement of 99.3% was achieved between the two panels, with 100% sensitivity and 95.2% specificity.

Among the 147 patients, pathogenic BRCA1/2 variants were observed in 20 by both the Oncomine® BRCA1/2 Panel and IonAmpliSeq™ BRCA1/2 Panel. However, the novel pathogenic frameshift variants BRCA2 p.K3032fs was only detected by the Oncomine® BRCA1/2 Panel in one patient. The mapped sequencing read visualized by the IGV revealed nucleotide deletion reads (Figure 4A). To validate this discordant result between the two panels, we performed Sanger sequencing and detected BRCA2 p.K3032fs in the patient (Figure 4B).

We next examined the reason for the false-negative result from the IonAmpliSeq™ BRCA1/2 Panel. The BRCA2 p.K3032fs mutation is a 4-bp deletion (c. 9090_9093delAAAA) at the eight poly (A) homopolymer site (Figure 4B), which is located near the end of the amplicon (Figure 4A). Therefore, the sequencing reads may have been filtered out during the mapping reads process because of a low read quality or because they were outside the targeted region. The IonAmpliSeq™ BRCA1/2 Panel did not detect the mutation using default variant call algorithm parameters, so we optimized this to enable BRCA2 p.K3032fs detection. However, a low allelic fraction and low-depth data remained (allelic fraction: 38%, variant read/ total read = 28/73). This suggests that a low-depth region and low-quality base score increases the risk of obtaining a false-negative result. In contrast, the Oncomine® BRCA1/2 Panel accurately detected BRCA2 p.K3032fs, perhaps because of the inclusion of a higher number of amplicons at the target region. 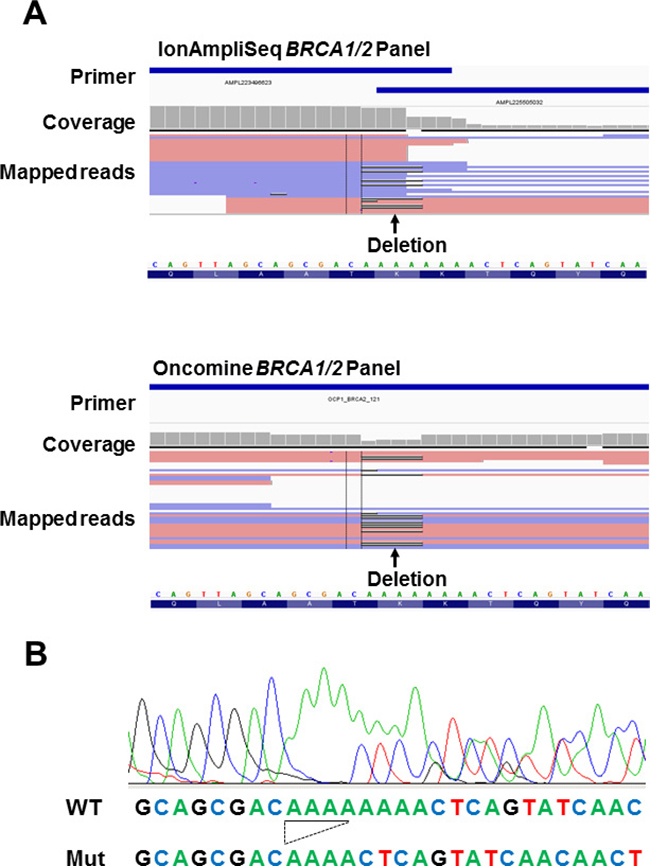 A previous study demonstrated that the IonAmpliSeq™ BRCA1/2 Panel is not a feasible method for analyzing copy number alterations because of the high number of false-positive results obtained, and the fact that an MLPA assay is required [17]. We therefore examined whether the Oncomine® BRCA1/2 Panel is suitable for analyzing copy number alterations. In our series, a large BRCA1/2 genomic deletion had already been determined by the MLPA assay, and a BRCA2 exon 21 to 27 deletion had been identified in one patient (case 22) [16]. To determine the copy number variation in 147 patients, we used sequencing reads data from the Oncomine® BRCA1/2 panel and normalized SampleID sequencing reads from eight different loci. Among 147 patients, one (case 22) was shown to carry a large BRCA2 genomic deletion at exon 21 to 27, which is consistent with MLPA assay findings (Figure 5A and Supplemental Table 4). Thus, there was 100% agreement between the MLPA assay and Oncomine® BRCA1/2 Panel (Figure 5B and Supplemental Table 4). These data demonstrate that the Oncomine® BRCA1/2 Panel accurately detects copy number variants. 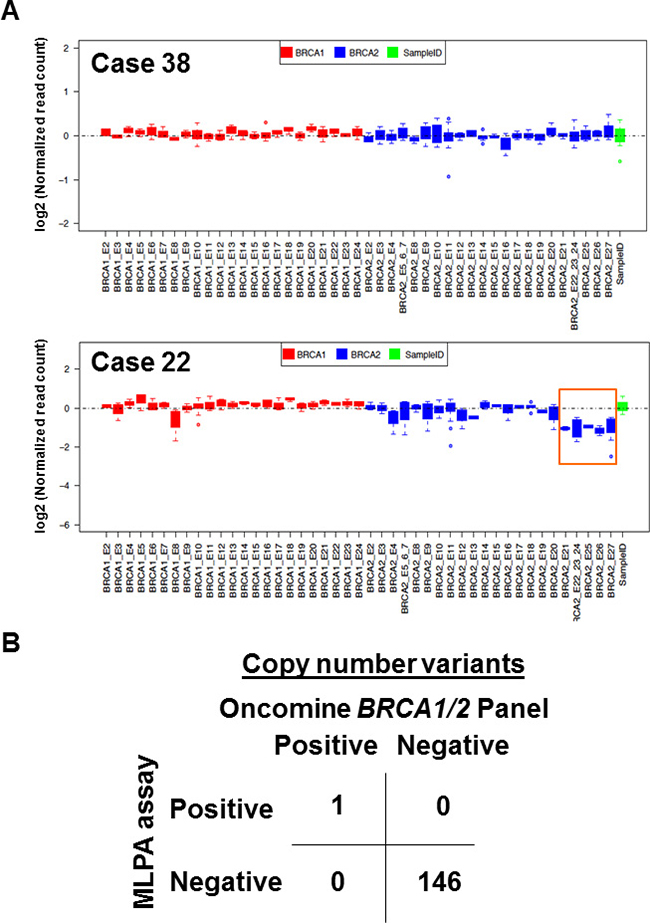 Figure 5: Copy number analysis identified a large genomic deletion. (A) Representative images from a patient with no copy number alteration (upper, case 38) and with a BRCA2 exon 21-27 deletion (lower, case 22). The orange box indicates the deletion locus. Sequencing reads of BRCA1 (red) and BRCA2 (blue) loci were normalized with SampleID tag sequencing reads (green). (B) Comparison of copy number alterations between the MLPA assay and Oncomine® BRCA1/2 Panel from 147 patients with breast and/or ovarian cancer. An overall agreement of 100% between the two assays was achieved, with 100% sensitivity and 100% specificity.

Germline mutations in Mendelian disease genes or predisposed genes for hereditary cancers have been identified in the previous studies, and the detection of these is used for the clinical diagnosis of disease. Sanger sequencing, the gold standard method, is widely used for detecting germline mutations. However, it is expensive and laborious, especially when analyzing long-range targeted regions without hotspot mutation sites [18].

Germline or somatic mutations, copy number loss, and DNA methylation frequently occur in BRCA1/2 in breast and ovarian cancer [24, 25]. These genetic and epigenetic alterations diminish BRCA1/2 functions and dysregulate the DNA repair pathway. PARP inhibitors were previously shown to have a synthetically lethal therapeutic effect on BRCA-deficient tumor cells [2]. PARP inhibitors have therefore been approved for use in advanced ovarian cancer patients harboring germline BRCA1/2 mutations in both the USA and Europe, but not in Japan yet. Given that this therapy will be approved for patients with BRCA-deficient cancer caused by somatic events, diagnostic demand is expected to increase for the analysis of BRCA1/2 somatic mutations and copy number alterations. The simultaneous detection of mutations and copy number alterations is an attractive and useful prospect for clinical settings. Therefore, the Oncomine® BRCA1/2 Panel offers an improved and accurate assay method that is likely to accelerate the sequential procedures of genetic counseling [26], diagnosis, prevention, and treatment decisions for eligible patients.

For standard genomic DNA samples, BRCA Germline I (HD793), BRCA Germline II (HD794) and BRCA Somatic Multiplex (HD795) were purchased from Horizon (Cambridge, UK). Peripheral blood samples were obtained from 147 breast and/or ovarian cancer patients who attended our hospital [15, 16]. Buffy coats were isolated following centrifugation of peripheral blood samples and freezed at −80°C until DNA extraction. Buffy coat DNA was extracted using the QIAamp DNA Blood Mini QIAcube Kit (Qiagen, Hilden, Germany) with the QIAcube (Qiagen). The concentration of DNA was determined using the Nano Drop 2000 spectrophotometer (Thermo Fisher Scientific). All patients provided written informed consent for the genetic research study, which was performed in accordance with the protocols approved by the Institutional Review Board at Yamanashi Central Hospital according to the relevant national guidelines.

Copy number variants were determined according to the original algorithm pipeline developed by Thermo Fisher Scientific. SampleID (8 amplicons amplified different chromosomes loci) was used as internal control to normalize data. To determine the sensitivity and specificity, copy number data was compared with the results of the MLPA assay (MRC-Holland, Amsterdam, the Netherlands). MLPA assay has been already performed using buffy coat DNA as previously described [16].

Y.H. wrote the main manuscript text and prepared figures and tables. Y.H. and Y.O. performed the experiments. Y.H., I.S., H.N. and M.O. developed the concept and design. I.S. and H.N. collected informed consents from patients. Y.H., I.S. and H.N. interpreted the data. M.O. supervised the experimental design and laboratory processes, and involved in the final editing. All authors reviewed the manuscript and have given approval to its final version.

We also thank all medical and ancillary staff of the hospital and the patients for consenting to participate. We also thank Charles Scafe, Jon Sherlock, Jin Katayama and Sachiro Asano for their technical help.

This study was supported by a Grant-in-Aid for Genome Research Project from the Yamanashi Prefecture (Y.H. and M.O.), the grant from The YASUDA Medical Foundation (Y.H.) and Research Grant for Young Scholars (Y.H.).