Chemotherapy is one of the main approach for ovarian cancer. Cancer stem cells (CSCs) escape chemotherapy and lead to chemoresistance. We previously demonstrated that cordycepin (Cd) inhibited metastasis in human ovarian carcinoma cells, the aim of this study is to investigate the effects of Cd on ovarian cancer stemness. TGF-beta was used to induce chemoresistance of chemotherapeutic agent cisplatin in SKOV-3 ovarian cancer cells. After treating with 100 μM of Cd, cell viability, the percentage of cancer stem cells, and the levels of matrix metalloproteinases (MMPs) were decreased in TGF-beta-induced SKOV-3 cells. Treatment of Cd recovered E-cadherin levels and inhibited vimentin levels while TGF-beta treatment significantly increased the expression of vimentin and PGC-1alpha, and decreased E-cadherin levels in SKOV-3 cells, indicating that the action of Cd on cancer stemness may contribute to the regulation of epithelial-mesenchymal transition (EMT). Cd efficiently attenuated chemoresistance caused by TGF-beta in SKOV-3 cancer stem cells to promote the cytotoxicity of cisplatin.

Cancer stem cells (CSCs) represent a distinct subpopulation of the tumor cells that play important roles in the tumor initiation, progression, metastasis, chemoresistance, and relapse [6]. A recent in vitro experiment indicates chemoresistant effect was stronger in cisplatin- or paclitaxel-treated epithelial ovarian CSCs than in their differentiated progeny [7]. It is believed that the cytotoxic effects of chemotherapy are affected on most cells in tumor tissue but CSCs are still leave behind.

It has been found that CD44- and CD117-expressing epithelial ovarian cells isolated from primary human ovarian tumors are highly tumorigenic and capable of reestablishing their original tumor hierarchy when injecting into the nude mice that have been propagated with the original tumors [8], suggesting that the CD44+/CD117+ cells possess the properties of CSCs. Moreover, it has been found that CD133 and CXCR4 were expressed in ovarian CSCs isolated from ovarian OVCAR-3, -4, and -5 cells [9]. CD133 is the human homologue of mouse Prominin-1, a five transmembrane glycoprotein domain and a cell surface protein originally found on neuroepithelial stem cells in mice [10].

Cordycepin (3′-deoxyadenosine) display antitumor activity that has been shown antiangiogenic, antimetastatic, and antiproliferative effects, as well as inducing cancer cell apoptosis [11–14]. Moreover, the inhibitory effects of cordycepin on metastaisis and tumor size have been evaluated in vivo [15]. Recently, we demonstrate that cordycepin inhibits metastasis through down-regulatiing mitochondrial activity of estrogen-related receptor in human ovarian carcinoma cells [16]. Due to CSCs has associated with chemoresistance in cancer therapy and the effects of cordycepin on CSCs remain unknown, hence we evaluated the interference of cordycepin with or without chemotherapeutic durg cisplatin on CSCs formation caused by transforming growth factor-beta (TGF-beta) treatment in SKOV-3 human ovarian carcinoma cells.

The effects of TGF-beta on chemoresistance in ovarian cancer cells 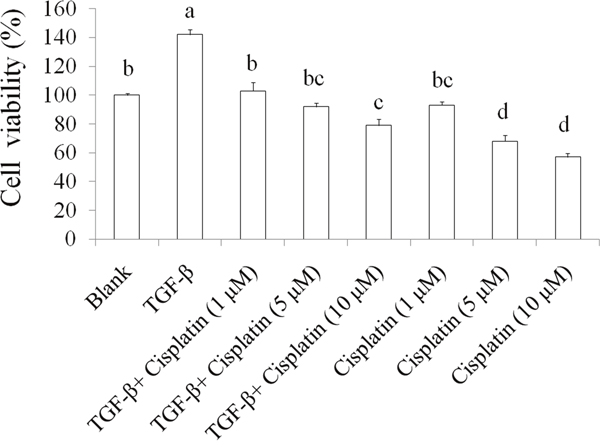 Figure 1: The effects of TGF-beta on chemoresistance in SKOV-3 cancer cells. The SKOV-3 cells were treated by TGF-beta (20 ng/mL) for 5 days to cancer stemness induction, then these cells were sorted for CD44+CD117+ by flowcytometeric. Subsequently, SKOV-3 with CD44+CD117+ cancer cells were treated with cisplatin for 24 h thereby measuring survival cells by crystal violet. Data was shown by mean ± SD (n = 3). (a.b.c.d) values with one different letter superscript are significantly different from each other (p<0.05). 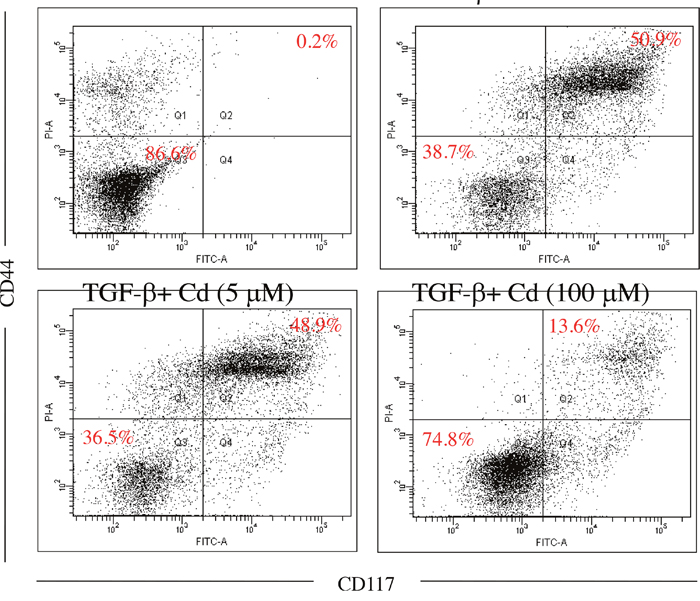 Figure 3: The effects of cordycepin (Cd) on MMP-2, MMP-9, and MMP-7 expression in TGF-beta-induced cancer stem cells by real-time PCR. SKOV-3 cells were treated with TGF-beta (20 ng/mL) every 24 h for five times (5 days) with or without cordycepin (Cd). Data was shown by mean ± SD (n = 3). (a.b.c) values with one different letter superscript are significantly different from each other (p<0.05). 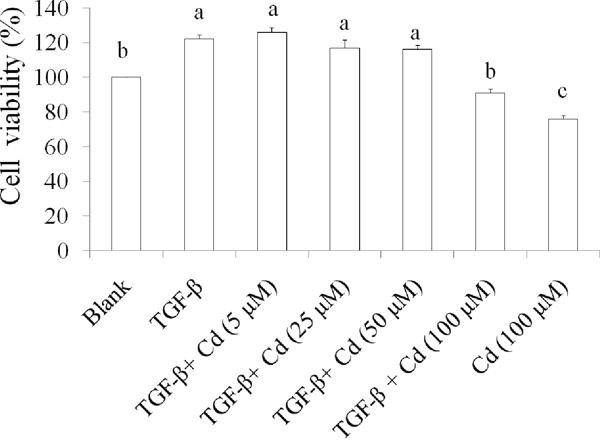 Figure 4: The effects of cordycepin (Cd) on cell proliferation in TGF-beta-induced cancer stem cells. SKOV-3 stem cells (CD44+/CD117+) were collected and treated with TGF-beta (20 ng/mL) every 24 h for five times (5 days) with or without Cd. Data was shown by mean ± SD (n = 3). (a.b.c) values with one different letter superscript are significantly different from each other (p<0.05).

EMT is a process that boosts invasive cells enter into the blood stream [22]. Cancer stem cells undergo EMT to migrate [23]. During EMT, the levels of E-cadherin, occludins, claudins, and desmoplakin are decreased, and the levels of vimentin, N-cadherin, fibronectin, and alpha-smooth muscle actin are incresed [24]. Recently, we have found a cotranscription factor peroxisome proliferator-activated receptor-gamma coactivator (PGC)-1alpha is associated with the metastasis of ovarian cancer [25]. In this study, we evaluated the effects of Cd on EMT and PGC-1alpha in TGF-beta-induced SKOV-3 cancer stem cells. As shown in Figure 5, TGF-beta treatment significantly increased the expression of vimentin and PGC-1alpha, and decreased E-cadherin levels in SKOV-3 cancer stem cells. However, Cd (100 μM) treatment recovered E-cadherin levels and inhibited vimentin levels in TGF-beta-induced SKOV-3 cancer cells, while there were no effects of Cd on PGC-1alpha. 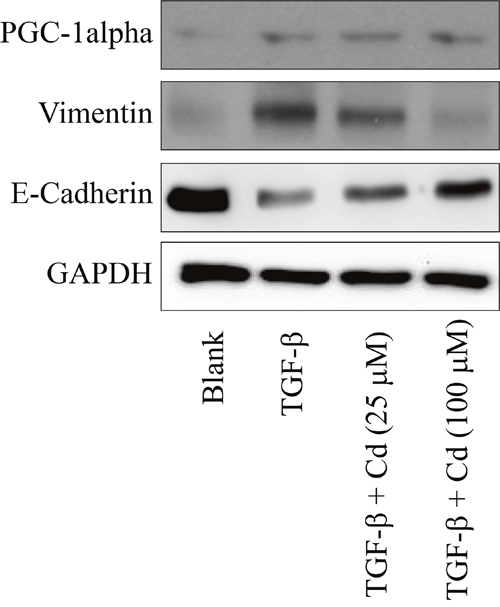 Figure 5: The effects of cordycepin (Cd) on PGC-1alpha and EMT markers (vimentin and E-cadherin) in TGF-beta-induced SKOV-3 cancer stem cells. SKOV-3 cells were treated with TGF-beta (20 ng/mL) every 24 h for five times (5 days) with or without cordycepin (Cd). Data was repeated for 3 times. 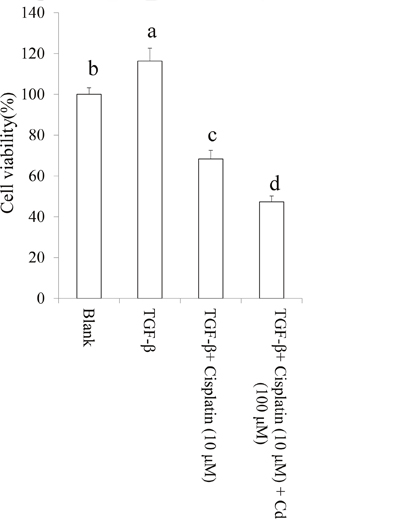 Figure 6: Cordycepin (Cd) attenuated chemoresistance in TGF-beta-induced cancer stem cells. SKOV-3 cells were treated by TGF-beta (20 ng/mL) every 24 h for five times (5 days) with or without Cd. Subsequently, the CD44+/CD117+ cells were collected and treated with or without cisplatin for 24 h. Data was shown by mean ± SD (n = 3). (a.b.c.d) values with one different letter superscript are significantly different from each other (p<0.05).

Ovarian cancer is a heterogeneous disease divided into three subtypes: epithelial carcinomas, stromal carcinomas, and germ cell tumors [2]. The invasive activity of epithelial tumor cells is based on single-cell migration, such as mesenchymal-type movement [5]. EMT is characterized by a morphological and functional shift from epithelial cells to fibroblast-like cells; this shift leads to the loosening of intercellular junctions and increase cellular mobility [26]. E-cadherin is one of the major cell adhesion molecules that form intracellular adhesion junctions in epithelial cells, the loss of E-cadherin level has been considered as the first stage of cancer cell metastasis [27]. EMT plays an essential role in cancer cell invasion and metastasis [27], and many different biomarkers have been identified to involve in EMT, such as E-cadherin, N-cadherin, fibronectin, and vimentin [27]. Previous study suggests that reduced E-cadherin levels may enhance EMT and increase the migration of cancer cells [25]. In addition, a decreased E-cadherin level is associated with poor prognosis in cervical cancer patients [16]. Human cancer cells those undergo EMT exhibit stem cell-like properties and increase metastatic potential [27].

The intrinsic resistance of CSCs, also known as tumor-initiating cells (TICs), to conventional therapy is currently regarded as a potential therapeutic target. For instance, it has recently been reported that the high rates and patterns of therapeutic failure observed in ovarian cancer are closely associated with stable accumulation of drug-resistant CSCs [29]. Because of its wide applications in cancer prevention and treatment, public interest in complementary and alternative medicine has been increased worldwide. Cd is one of the most common and crucial types of complementary and alternative medicine. Novel molecular prognostic markers, which participate in specific pathways are involved in cervical cancer tumorigenesis and tumor progression. Taken together, this study confirmed that Cd acted as a complementary agent for ovarian cancer therpy that against chemoresistance.

The cytotoxic effect of cordycepin (Cd) on ovarian CD44+CD117+ cells isolated from SKOV-3 cells was measured using crystal violet staining assay. The cells were seeded on 24-well plates (3 × 104 cells/well) and treated with various concentrations of cordycepin for 24 h. The medium was subsequently removed, and the cells were washed with phosphate-buffered saline (PBS), stained with 2 g/L of crystal violet in phosphate-buffered formaldehyde for 20 min, and washed with water. Crystal violet bound to the cells was dissolved in 20 g/L of SDS solution, and the corresponding absorbance was measured at 600 nm [31].

The cells were rinsed with ice-cold PBS and lysed using RIPA lysis buffer with protease and phosphatase inhibitors for 20 min on ice. The cells were then centrifuged at 12,000 ×g for 10 min at 4°C. Protein extracts (20 μg) were resolved through SDS–polyacrylamide gel electrophoresis (200 V, 45 min). The protein bands were electrotransferred to nitrocellulose membranes (80 V, 120 min). The membranes were subsequently treated with a 5% enhanced chemiluminescence (ECL) blocking agent (GE Healthcare Bio-Sciences) in saline buffer (T-TBS) containing 0.1% Tween-20, 10 mM Tris-HCl, 150 mM NaCl, 1 mM CaCl2, and 1 mM MgCl2 at a pH of 7.4 for 1 h and then incubated with a primary antibody overnight at 4°C. Subsequently, the membranes were washed three times in T-TBS, and the bound antibodies were detected using appropriate horseradish peroxidase-conjugated secondary antibodies, followed by analysis in an ECL plus Western blotting detection system (GE Healthcare Bio-Sciences).