1Key Laboratory of Health Cultivation of the Ministry of Education, Beijing University of Chinese Medicine, Beijing, 100029, People's Republic of China

Autoimmune thyroid diseases are familial autoimmune disorders that are more common in women than men. These diseases include Grave’s disease (GD), Hashimoto’s thyroiditis (HT), atrophic thyroiditis, and subacute lymphocytic thyroiditis (also known as postpartum thyroiditis, PPT), painless thyroiditis (PT), or silent thyroiditis (ST) [1]. The primary pathological features of autoimmune thyroid diseases are thyroid tissue infiltration of lymphocytes and thyroid dysfunction. Other typical hallmarks of these diseases are thyroid autoantibodies such as thyrotropin receptor antibody (TRAb), anti-thyroglobulin antibody (TGAb), and anti-thyroperoxidase antibody (TPOAb) [2]. The production of these autoantibodies can be attributed to both environmental and genetic factors [3]. Iodine overdose is the primary environmental cause [4], while bacterial and viral infections could be other causative factors [5, 6]. Cross-reactive antigens can induce superantigen-activated polyclonal T cells, increase expression of human leukocyte antigen in thyroid tissue and promote other autoimmune tolerance responses [7, 8]. Helicobacter pylori (H. pylori) infection is one of the most common chronic infections worldwide [9]. H. pylori specifically colonizes in the gastric mucosa, inducing chronic inflammation and promoting chronic gastritis, peptic ulcers, and gastric cancer [10]. H. pylori has been reported to be associated with other diseases such as diabetes [11], nonalcoholic fatty liver disease [12], iron deficiency anemia [13], and idiopathic thrombocytopenic purpura [14]. The relationship between H. pylori infection and AITD has also recently been explored. In 2013, Shi et al. [15] systematically evaluated 7 studies including 862 patients, observing that H. pylori infection was associated with the development of AITD in patients with GD but not HT. In this systematic meta-analysis, we further investigated the association between H. pylori infection and AITD.

Characterization of the included studies and method evaluation

The initial search identified 139 articles that investigated the association between H. pylori infection and AITD, including 119 articles in English and 20 in Chinese. Further examination excluded 110 articles, including 53 review articles, nine duplicated articles, 41 articles with unavailable information, and seven articles without controls, cohort, or cross-sectional surveys. The remaining 29 articles were carefully analyzed. Four articles had a control group that did not consist of healthy individuals, and ten articles with patients in the case group who had other autoimmune diseases, were excluded. Eventually, 15 articles [16–30] including 3,046 patients were selected for meta-analysis (Figure 1). The included studies included cases of GD and HT but no cases of atrophic thyroiditis or subacute lymphocyte thyroiditis. The identified articles were all case-control studies; including six published in Chinese [20, 23, 24, 27–29] and nine published in English [16–19, 21, 22, 25, 26, 30]. These studies included a total of 1,716 patients with AITD and 1,330 control subjects. Seven of these articles were conducted in China [20, 23, 24, 26–29], and eight were completed in other countries [16–19, 21, 22, 25, 30]. Of the 15 included articles, two were abstracts [16, 19] and 13 were full texts [17, 18, 20–30] (Table 1). All the articles had clear inclusion and exclusion criteria. The baseline characteristics of the participants in all the studies were comparable between the observation and control groups, apart from one study [30], in which the age of participants in the observation group was greater than the age of participants in the control group. One included study [18] was conducted on children with an average age of 10.6 years, while the other seven studies [16, 19, 20, 23, 24, 27, 29] reported no information on the age of the subjects. In nine studies [18–20, 22, 23, 25, 26, 29, 30] H. pylori infection was diagnosed by ELISA. Other methods, such as western blotting, urea breath test (UBT), stool antigen test (SAT), and both ELISA and UBT, were used in the remaining four studies [16, 17, 21, 24]. In two studies [27, 28], the diagnostic method was not reported. Overall, 11 studies [16, 18, 20, 21, 23–29] indicated that H. pylori infection was associated with AITD, while four studies [17, 19, 22, 30] showed no correlation between H. pylori infection and AITD. Seven of the 15 studies reported that patients were infected with CagA-positive strains of H. pylori [16, 17, 19, 21, 22, 26, 30], of which four studies [16, 21, 22, 26] showed that the infection was significantly associated with AITD, and three studies demonstrated no correlation between the infection and AITD [17, 19, 30]. Five studies reported that thyroid autoantibody levels in patients in the observation group were influenced by eradication therapy [20, 24, 27–29]. The logarithm and logarithm standard error of OR value in H. pylori infection were utilized to draw the funnel plot, which was symmetrical and was analyzed using Begg’s rank correlation method, with Pr > |z| = 0.656 > 0.05, suggesting the absence of publication bias (Figure 2). 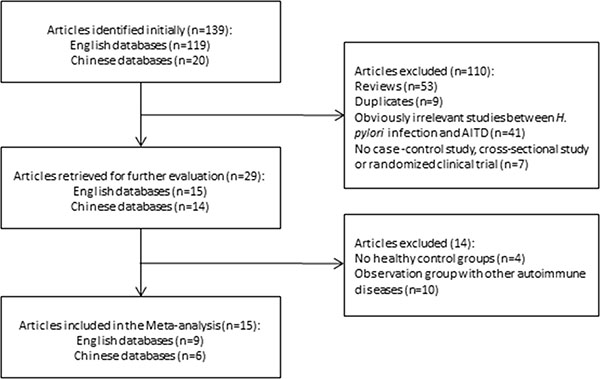 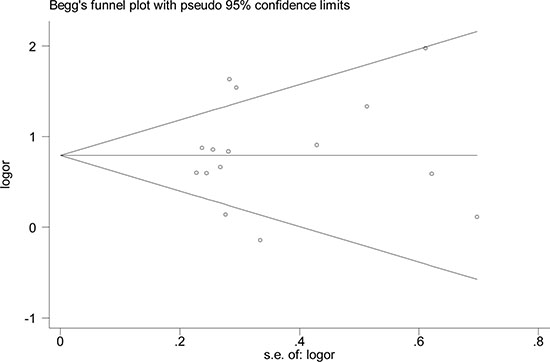 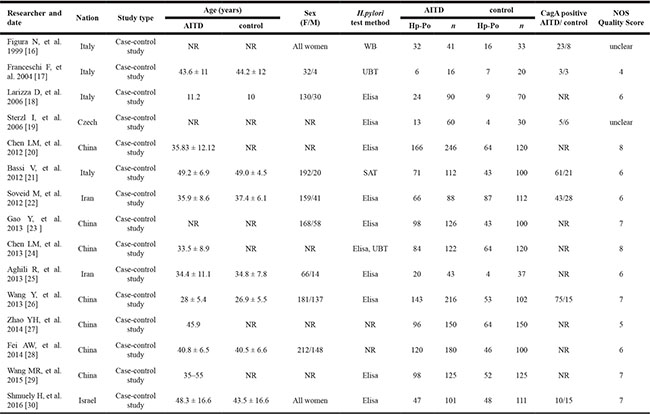 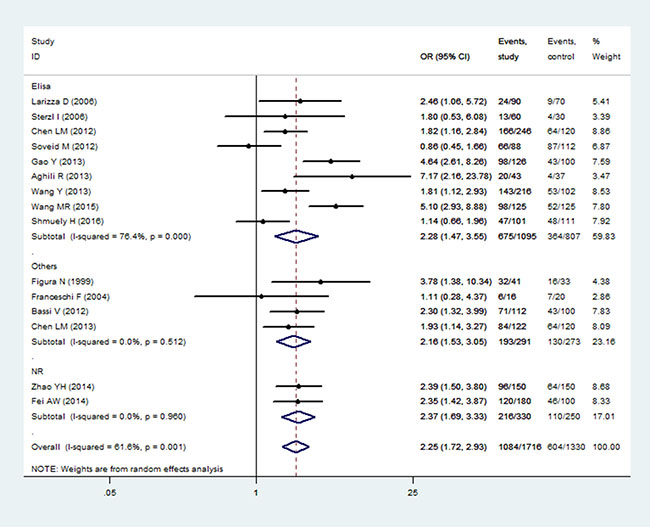 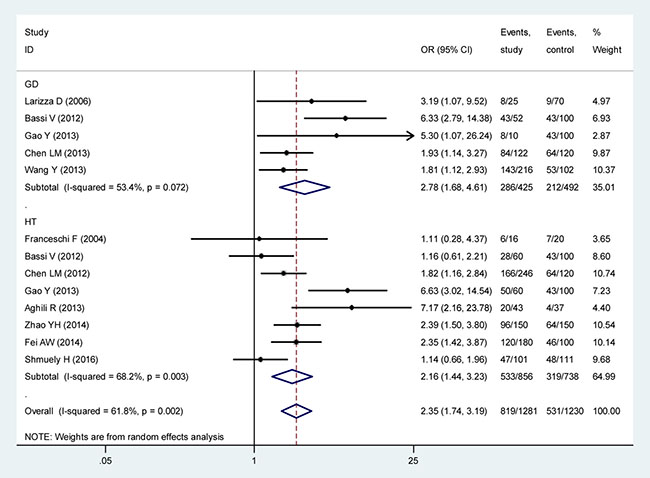 Due to the observed heterogeneity in statistical results, a sensitivity analysis was performed to investigate the influence of specific research methods. This analysis indicated no significant difference and the conclusions were consistent, indicating that the analysis was stable (Supplementary Figure 1). Meta-regression analysis was performed to determine the heterogeneity in the results, and revealed no heterogeneities among the year and country of publication, sample size, case comparison ratio, or the method used to detect the presence of H. pylori (Supplementary Table 1).

The rates of infection with CagA-positive H. pylori strains were reported in seven studies. Heterogeneity was observed among the rates in these studies (I2 = 73.7%, p = 0.001). According to random model calculation, the rate of H. pylori infection was 34.70% in the observation group and 18.90% in the control group (OR = 1.99, 95% CI: 1.07–3.70, p = 0.030), indicating that infection with CagA-positive H. pylori strains was associated with AITD (Figure 5). Consistent with this analysis, there was heterogeneity in the statistical results and sensitivity analysis. Systematic evaluation was carried out in a manner similar to that described previously. By excluding the studies by Sterzl et al. [19] and Shumuely et al. [30], the merged effect significantly changed (OR = 3.35, 95% CI: 2.42–4.64) and the heterogeneity disappeared (I2 = 0%, p = 0.653), while the conclusion was still consistent (Supplementary Figure 2). Due to the limitations of the retrieved literature, meta-regression analysis was unable to identify the source of heterogeneity [31, 32]. 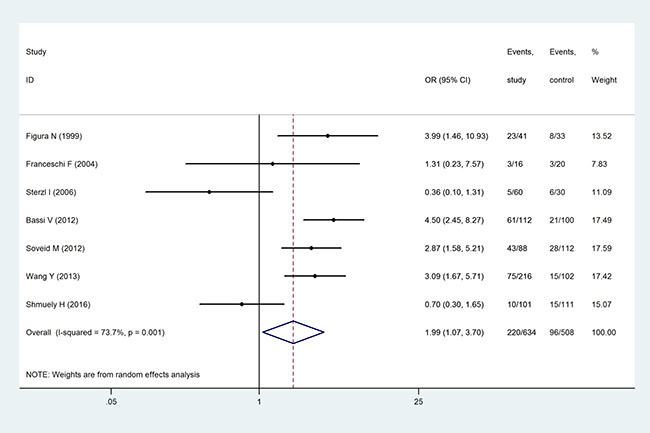 Figure 5: Correlation analysis of infection with a CagA-positive strain of H. pylori, and AITD.

Five studies [20, 24, 27–29] reported the influence of eradication therapy on thyroid autoantibodies. Patients with AITD who had H. pylori infection were selected from each study and were randomly allocated to observation and control groups. Only patients in the observation group were treated with eradication therapy. Therefore, meta-analysis could not be performed based on the data provided. The descriptive analysis is shown in Supplementary Table 2.

The correlation between AITD and H. pylori infection was studied in 15 publications reporting a total of 3,046 cases. Unlike a previous meta-analysis published by Shi et al. in 2013 [15], which included unhealthy individuals in the control group, and a previous meta-analysis by Luis et al. in 1998 [33], which included patients with non-toxic nodular goiter, in this study we included only healthy individuals in the control group. Thyroid nodules were previously reported to be associated with H. pylori infection [34]. Atrophic gastritis and/or chronic H. pylori infection in patients with multiple nodular goiters are often treated with an increased dose of thyroxine [35], hence, we excluded studies performed on such patients.

Our results indicated that patients with AITD were more susceptible to H. pylori infection (OR = 2.25, 95% CI: 1.72–2.93), particularly infection with CagA-positive strains of H. pylori (OR = 1.99, 95% CI: 1.07–3.70). This analysis is consistent with a previous report by Shi et al. (OR = 1.92, 95% CI: 1.41–2.61; OR = 2.24, 95% CI: 1.06–4.75]. The CagA gene is present in high-toxicity strains of H. pylori and the encoded product, CagA protein, is a marker of gastric mucosal inflammation. CagA is highly immunogenic and promotes local inflammatory cell infiltration [36]. CagA-positive H. pylori strains share a highly identical sequence with thyroperoxidase [37], hence, H. pylori infection could induce autoantibody damage to gastric epithelial cells, leading to gastric disease and antigenic antibody cross-reactions causing thyroid tissue damage [38, 39]. Shi et al. indicated that H. pylori infection was associated with GD (OR = 4.35, 95% CI: 2.48–7.64), but showed no significant correlation with HT (OR = 1.45, 95% CI: 0.92–2.26). Both GD and HT were included in this study and were associated with H. pylori infection in subgroup analysis (OR = 2.78, 95% CI: 1.68–4.61; OR = 2.16, 95% CI: 1.44–3.23). GD and HT share similar pathogenic factors, pathology, biochemistry, and clinical features such as thyroid tissue lymphocyte infiltration resulting in inflammation and TPOAb, TGAb, or increased levels of other thyroid autoantibodies [40]. Thus, H. pylori infection is expected to be associated with GD and HT, which is consistent with the results of our meta-analysis. We also observed that pharmaceutical eradication of H. pylori infection reduced levels of thyroid autoantibodies in patients with GD and HT [41]. Patients with AITD who had dysfunctional gastric acid secretion required treatment with higher thyroid hormone levels, indicating that normal gastric acid secretion was necessary for the effective absorption of oral thyroxine [35]. These studies suggest that H. pylori infection was associated with the pathogenesis and development of AITD. Our literature review identified no articles reporting the association between atrophic thyroiditis and H. pylori infection, while the conclusions from other studies are controversial. Due to the limited number of publications and limited data, the correlation between atrophic thyroiditis and H. pylori infection was not analyzed here.

In conclusion, H. pylori infection is associated with AITD. Our results suggest that patients with AITD are more susceptible to H. pylori infection, especially infection with CagA-positive strains of H. pylori. The high heterogeneity could be influenced by several factors. First, only the abstracts of some included publications were available in standard databases such as PubMed, Web of Science, Ovid Online, etc. [16, 19], limiting the extraction of patient information. In addition, H. pylori infection could also be associated with other non-gastrointestinal diseases, such as diabetes or autoimmune diseases, but we did not exclude these cases from our analyses [18, 22, 25, 30]. Additionally, in some studies antibiotic use was not ruled out [18, 26]. These three factors may contribute to the heterogeneity of these studies. Additionally, although the funnel plot suggests no bias, we cannot ignore the potential language or regional bias as we included only manuscripts published in English and Chinese.

Articles or publications including the following information were selected:

Articles or publications were excluded where (1) Insufficient information was provided to support the association of H. pylori infection with AITD in the full text publication or abstract where full text manuscripts were not available; (2) The same data was reported in several publications; (3) The study did not include a control group.

The quality of the retrieved articles was evaluated independently by two researchers. In case of any disagreement between the researchers, the final decision was made by a third researcher. The quality assessment was followed by the standard “NOS” evaluation recommended by Cochrane [42], including 3 items and 8 articles (population selection, comparability, exposure evaluation, and outcome evaluation) with a maximum score of nine. The results included diagnostic criteria, the case number of both H. pylori and CagA-positive infections, the sample numbers in observation and control groups, and autoantibody titer after pharmaceutical eradication of H. pylori infection.

Heterogeneity analysis was performed using Stata12.0 processing software. If heterogeneity (I2 > 50%, p < 0.10) was found between studies, a random model was used for further calculation. In the case of no heterogeneity, the fixed effects model was used. The results were presented as the odds ratio (OR) and confidence interval (95% CI). Meta-regression analysis was used to identify heterogeneity sources. The stability of the meta-analysis was assessed using sensitivity analysis. If the data provided could not be meta-analyzed, only qualitative analysis by description was provided. An χ2 test was performed using SPSS16.0 to assess differences between subgroups. The funnel plot and Begg’s rank correlation method were used to identify biases in the data.