Background: We hypothesized that immune-infiltrates were associated with superior survival, and examined a primary osteosarcoma tissue microarrays (TMAs) to test this hypothesis.

Conclusions: Our findings support the hypothesis that CD8/Tia1 infiltrate in tumor microenvironment at diagnosis confers superior survival for pts with localized osteosarcoma, while PD-L1 expression is associated with worse survival.

Ostesarcoma is a rare, aggressive sarcoma. Whereas there is an agreement that surgery, with adjuvant chemotherapy, is paramount for the primary therapy of the cancer, about 30% of patients without evident metastases at presentation will die of disease [1]. The prognosis is even poorer (10% survival at 5-years) in patients with synchronous metastases [1]. Therefore there is an urgent need to identify new targets, different risk groups and predictive factors for tailored treatment for each individual.

Various mechanisms have been proposed for the resistance of human solid tumors to immune recognition and obliteration, including the recruitment of regulatory T cells (T-reg), myeloid derived suppressor cells (MDSC) [2] and up-regulation of immune inhibitory ligands, such as the ligand of programmed cell death protein 1 (PD-L1) [3].

T-lymphocyte and antigen-presenting cells (APCs) interaction is in fact bi-directional and mediated by PD-L1 and programmed cell death protein 1 (PD1) on APCs and on lymphocytes. PD-L1 is expressed also by several tumors [3]. 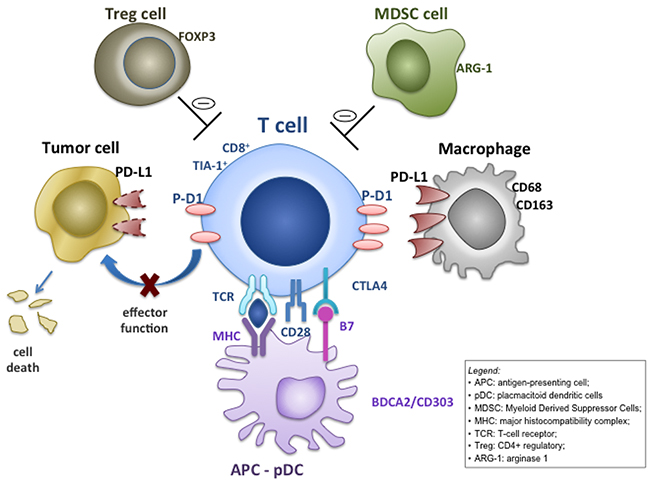 Few data on osteosarcoma microenvironment composition and the PD-1/PD-L1 expression are available, and most of the studies refer to small series with incomplete clinical information, inhomogeneous for stage (metastatic and localized patients), treatments and timing of biopsies [10].

The present study aim is to characterize the immune-infiltrates and PD-L1/PD-1 pathway in sample of chemo-naïve patients with localized osteosarcoma, treated according to the same protocol, in order to assess its prognostic implications and its potential role in cancer immune-evasion.

Eighty-six out of 129 cases analysed were evaluable for at least 7 markers and were included in the present study. 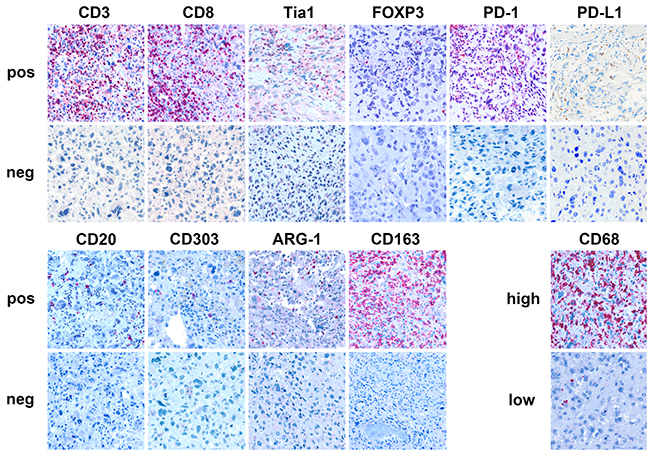 Based on multivariate analysis results on pre-treatment samples, a post-hoc analysis on CD8 and Tia1 was performed.

Due to post-treatment changes 33/86 patients were assessable after treatment (excluding 53 patients with massive necrosis and no tumor).

The role of microenvironment in tumor immune escape is well recognized. Several studies addressed the role of tumor microenvironment in pathobiology and its impact on survival of osteosarcoma [11–15], however none is specific for osteosarcoma in the localized stage, nor compared the prognostic power of immune-infiltrate with the other validate prognostic factor routinely used in clinical practice [16, 17],

The present study, including patients with osteosarcoma in a localized stage, and treated within the same protocol [16], demonstrated an independent prognostic role of CD8+ and Tia1 lymphocytes.

The first study demonstrating the association between CD8 infiltrate and cancer specific survival was published in 2001 [18], and similar findings were subsequently confirmed among many histotypes [19, 20].

In the sarcoma field both a series of 33 ostesarcoma, including metastastic and localised patients [11], and a large soft tissue sarcoma French study, including several histotypes and also low grades lesions, failed to demonstrate a prognostic role for CD8+ lymphocytes [21].

The results of our study are in contrast with those data [11, 21], in fact a strong advantage in terms of survival has been observed in patients with CD8+ infiltrate.

To investigate the differentiation state of tumor-infiltrating T cells, tissues were analyzed for Tia1 expression, which is a marker of cytotoxic function: the prognostic significance of CD8+ cells was even more relevant when the tumor infiltrate was characterized by the concomitant presence of Tia1+ lymphocytes. Tia1+ lymphocytes might represent a more efficient subset of CD8+ effector cells, playing an important role in immune-surveillance of osteosarcoma [22].

In our study, the rate of PD-L1 expression in IC was 14%. Previous studies on osteosarcoma samples reported a higher rate of positive expression of PD-L1(IC) ranging from 25% [11] to 74% [10]. This difference might be related to the heterogeneity of the cases examined, being many of them metastatic, while our patients all had localized disease. In fact, it is well known that PD-L1 expression increases in advanced stages of the diseases as reported by Sundara Y et al: 13% in primary tumours, 25% in local relapses tissue and 48% in metastatic (p = 0.002) [12].

In our study a trend towards an inferior survival for positive PD-L1(IC) patients was observed. Other reports were able to demonstrate a significantly inferior event-free-survival (EFS) for osteosarcoma patients with positive PD-L1(IC) [11]. A prognostic role for PD-L1 was also confirmed by Kim et al, at RNA level [10]. Interestingly, in our series, the PD-L1(IC) expression has a prognostic significance at multivariate analysis in the subgroup of patients with CD8+ immune-infiltrate. It might be hypothesised that “PD-L1”-mediated immune-suppression negatively influences CD8+ lymphocytes function (Figure 1). In addition, it was shown that tumor response to PD-L1 or PD-1 inhibition is directly related to both the level of PD-L1 expression and lymphocytic infiltration of the tumor [23–25].

None of the patients had PD-L1 on tumor cells, as shown for other histotypes, such as colon rectal and gastric carcinoma [26, 27]. About 7% of osteosarcoma presented PD-L1 in the neoplastic clone in the study by Koirala et al [11], while head and neck squamous cell carcinoma, melanoma, breast and kidney cancer frequently express PD-L1 on the surface of tumour [4, 28]. Such variable expression among different studies may reflect the variable susceptibility of tumour cells and infiltrating immune cells to cytokines and other stromal factors in the tumour milieu [5]. In fact there are two distinct type of PD-L1 expression: the first is a constitutive (innate) expression on tumoral cells membranes, with an homogenous patter; the second is adaptative, and can be found both on tumoral cells or in macrophage [5].

In our series no difference in survival according with presence of TAMs, characterized by both CD163 and CD68 expression, was observed (CD163+ 81% vs CD163- 56%, p = 0.17), while in other osteosarcoma series a prognostic role of TAMs was suggested [13, 14]. This might be explained by different statistical analysis design and different stages of patients included [13, 14].

Our data suggest a role of immune-infiltrate in progression of localized osteosarcoma, and might support the use of immune-modulating agents in the treatment of this tumor. Of interest, mifamurtide, a modulator of innate immunity, which increases a wide variety of immunomodulatory molecules [15] and favours CD8 and NK cell activation [30], has been approved by EMA for the treatment of patients with localized high-grade osteosarcoma based on the results of a randomized trial [31].

In conclusion, CD8/Tia1 citotoxic T-lymphocytes emerge as an important player in anti-tumor immune response. Also, this study highlights the prognostic role of tumor microenvironment in the setting of localized osteosarcoma. The data are interesting and intriguing, but a clinical application requires confirmations in other series (Figure 4). 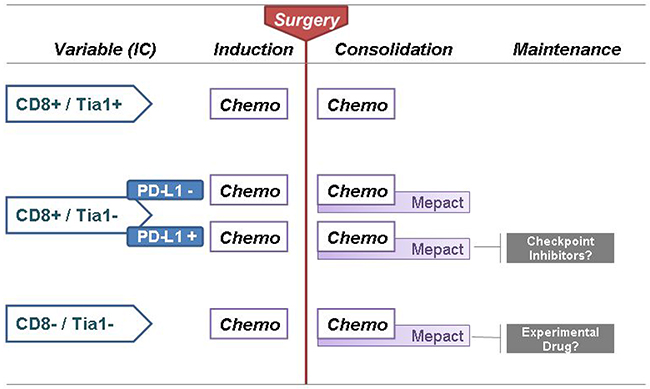 Figure 4: Proposal for ‘Immune-infiltrate based treatment algorithm’ for localized osteosarcoma.

After EC approval, tissue samples obtained from biopsies performed prior chemotherapy in 129 patients were collected. Patients were prospectively treated at Istituto Ortopedico Rizzoli from 04/2001 to 11/2006 within protocol ISG-OS1, with surgery and a chemotherapy based on methotrexate, cispaltin, adriamicyn and ifosfamide as described [16].

For tissue microarray (TMA) construction, a slide stained with hematoxylin and eosin was prepared from each formalin-fixed, paraffin-embedded (FFPE), and representative tumor regions were morphologically identified and marked on each slide. Tissue cylinders with a diameter of 1.0 mm were punched from the marked areas of each block and brought into a recipient paraffin block. Five TMAs were constructed. Each tumor sample was represented by a minimum of 1 core to a maximum of 5 cores.

Only cores with tumoral component were included in the analysis. The immunehistochemical scores were generally concordant among cores of the same patient, in case of heterogeneity the highest score was considered for the analysis.

OS was estimated according to the Kaplan and Meier method with their respective 95% confidence intervals (CI) and calculated from the first day of chemotherapy administration to death or last follow-up visit.

In 86/129 patients, FFPE from tumoral masses surgically resected, after neoadjuvant chemotherapy, were collected. The full slides sections from FFPA were investigate by immunohistochemistry for CD8+ and Tia1 expression.

EP, CA substantive intellectual contribution to conception and design of study, drafting and revision of manuscript, statistical analyses and interpretation of data

SP, PL, PP: substantive intellectual contribution to conception and design of study, final approval of the version to be published

The authors thank Alba Balladelli and Cristina Ghinelli for editing support, and Ayse U. Akarca for PD-L1 staining.