Can urologists introduce the concept of “oligometastasis” for metastatic bladder cancer after total cystectomy?

The definition of oligometastasis and patients stratified

Table 1: Uni- and multivariate analysis for cancer-specific death according to clinicopathological features including the metastatic number, tumor diameter, and tumor site in overall patients

Relationship between oligometastasis and clinicopathological features in the overall patient population

Table 2: Relationship between the oligometastatic status and clinicopathological features in all patients 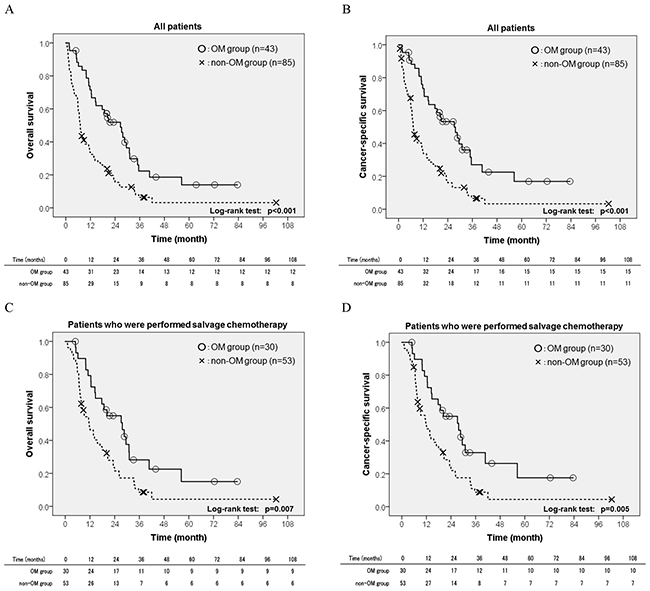 Figure 1: A Kaplan-Meier curve of overall survival in (A) the overall population and (C) patients who received salvage chemotherapy, and cancer-specific survival in (B) the overall population and (D) patients who received salvage chemotherapy according to the metastatic status (oligometastasis; OM group vs. non-oligometastasis; non-OM group).

Table 4: Relationship between the oligometastatic status and clinicopathological features in patients who received salvage chemotherapy

We retrospectively analyzed the records of patients who were diagnosed with metastatic BC after TC at our 6 institutions and investigated the relationship between prognoses and oligometastasis. Our results revealed that, in the overall population, non-oligometastasis, not performing salvage chemotherapy, and not performing metastatectomy were independent risk factors for overall death and cancer-specific death in metastatic BC after TC. In a subgroup of patients who received salvage chemotherapy, non-oligometastasis was the only independent predictor for overall death and cancer-specific death. Furthermore, we evaluated the association between oligometastatic organs and clinical outcome in the overall population. When different oligometastatic tissues were separately added as factors to univariate Cox regression analysis for cancer death, we found that none of these factors were identified as significant indicators for cancer death.

Oligometastasis was defined in 1995 as metastases limited in number and location because the facility for metastatic growth has not been fully developed and the site for growth is restricted [6]. Our study population only included oligometastases that occurred after surgery; therefore, in the narrow sense, this may be called oligorecurrence. The definition of oligometastasis differs somewhat among the types of cancers, but was generally created based upon the concept of “a solitary or a few detectable metastatic lesions of a small size that are generally confined to a single or a few organs”, according to previous studies [7, 12, 13]. Therefore, the metastatic site, number, and tumor diameter are particularly important for establishing a definition for oligometastasis. In the present study, we used criteria that included these important factors based on previous findings.

We retrospectively reviewed medical records between 2004 and 2014 archived at our 6 institutions. In the present study, 506 consecutive patients underwent TC. After surgery, patients were generally followed-up at least every 3-4 months for 2 years, then every 6 months until 5 years, and annually thereafter. Follow-up visits consisted of a physical examination and serum routine blood tests. Diagnostic imaging including computed tomography of the chest/abdomen/pelvis with or without intravenous contrast was performed every 6 months until 5 years and then annually or when clinically indicated. GC, MVAC, or a GP chemo-regimen was used in neoadjuvant and/or salvage settings. We used different chemo-regimens in salvage settings from those in neoadjuvant settings if metastasis occurred within 1 year of TC, and if metastasis occurred more than 1 year after TC, the same chemo-regimen in salvage settings as those in neoadjuvant settings was selected.

A total of 149 patients had metastatic lesions after TC. Disease recurrence was defined as any documented recurrence by radiographically or pathologically proven failure in local and distant sites. We excluded 11 patients who were data deficiency or had a short observation period (less than 1 year) and 10 patients who were not diagnosed with UC. After the exclusion of these patients, the remaining 128 patients were assessed in the present study.

The analysis of the independent predictors for identifying a favorable prognosis

We have no potential conflicts of interest.