Recently, the lncRNA small nucleolar RNA host gene (SNHG1) has been exhibited to be upregulated, which plays a crucial role in the development and prognosis of several cancers. However, the role of the biology and clinical significance of SNHG1 in the tumorigenesis of colorectal cancer (CRC) has rarely been reported. In this work, we firstly found that SNHG1 expression levels were upregulated aberrantly in colorectal cancer tissues and colorectal cancer cell lines. By Kaplan-Meier survival analysis, patients with high SNHG1 expression level had poorer overall survival (OS) and progression-free survival (PFS) than those with low SNHG1 expression. In multivariate analysis, increased SNHG1 expression was proved to be an independent unfavorable prognostic indicator for CRC. In vitro experiments revealed that SNHG1 silencing inhibited the growth and metastasis and induced apoptosis of CRC cell lines. Finally, we found that SNHG1 may induce the activation of the WNT/β-catenin pathway through regulating β-catenin expression and transcription factor-4 (TCF-4), cyclin D1 and MMP-9. Altogether, our findings demonstrated that lncRNA SNHG1, was high expressed in colorectal cancer tissues and may serve as a tumor oncogene through regulating WNT/β-catenin signal pathway, which provided a candidate diagnostic biomarker and a promising therapeutic target for patients with CRC.

Colorectal cancer (CRC) is a common cause of cancer-related mortality worldwide [1]. Because patients with CRC are very often diagnosed at advanced stages and the progression of the disease is rapid, the 5-year relative survival for colorectal cancer is still poor [2, 3]. With the numerous molecular and pathological studies, colorectal cancer is now regarded as a heterogeneous group of diseases with definite clinical-pathological features, which arises from the dysregulation of many cancer-associated genes [4]. Thus, a better insights of the molecular mechanisms on CRC initiation and progression may contribute to develop new strategy for the treatment and to meliorate the prognosis of CRC patients. Currently, increasing evidence have exhibited that noncoding RNAs (ncRNAs) may be connected with CRC pathogenesis, providing new understanding into the biology of CRC [5, 6].

LncRNAs, which are defined as ncRNAs longer than 200 nucleotides without open reading frames (ORFs) and are unable to be translated into proteins [7]. Aberrant expression of lncRNAs have been demonstrated in a variety of pathological processes in many species [8, 9]. Furthermore, emerging evidence suggests that lncRNAs serve as critical regulators of cancer initiation, progression, and metastasis [10, 11]. The small nucleolar RNA host gene (SNHG1, GenBank accession ID:23642), a novel non-coding RNA localized at 11q12.3, has exhibited oncogenic role in diverse cancer. Long noncoding RNA SNHG1 predicts a poor prognosis and promotes hepatocellular carcinoma tumorigenesis [12] and SNHG1 exacerbates hepatocellular carcinoma through suppressing miR-195 [13]. Wang et al. has reported that upregulation of the long non-coding RNA SNHG1 predicts poor prognosis, promotes cell proliferation and invasion, and reduces apoptosis in glioma [14]. Moreover, lncRNA SNHG1 negatively regulates miR-199a-3p to enhance CDK7 expression and promote cell proliferation in prostate cancer [15] and can serve as diagnostic and prognostic markers for prostate cancer through androgen-responsive manner [16]. Meanwhile, lncRNA SNHG1 is upregulated and contributes to progression of non-small cell lung cancer through inhibition of miR-101-3p and activation of Wnt/β-catenin signaling pathway [17, 18].

However, it is still unknown whether this distinct function of lncRNA SNHG1 is involved in the tumorigenesis of CRC. In our present study, we explored the expression, clinical significance, biological function and molecular mechanism of lncRNA SNHG1 in CRC. For the first time, our results demonstrated a novel lncRNA signaling pathway regulatory network that is the SNHG1-β-catenin-WNT signaling pathway in CRC. 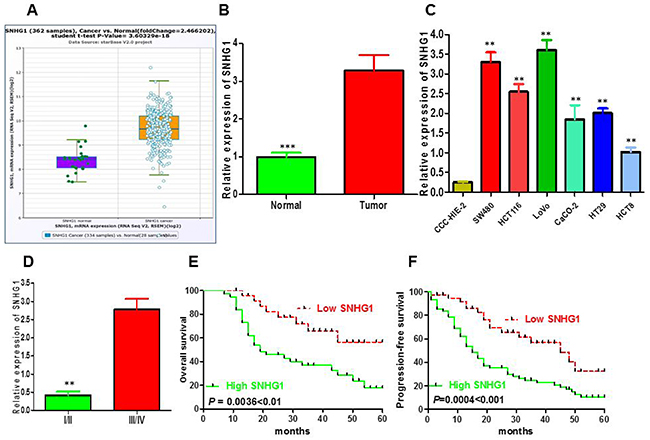 Table 1: The association between SNHG1 expression and clinicopathological parameters in colorectal cancer

Table 2: Univariate and multivariate analysis of clinic-pathologic factors for OS or PFS in colorectal cancer

We probed that lncRNA SNHG1 expression was relatively higher in SW480 and LoVo cell lines than that in HCT116, CaCO2, HT29 and HCT8 cancer cell lines (Figure 1C). Thus, we selected SW480 and LoVo cell lines for the following loss of function studies. To further investigate the role of SNHG1 in colorectal cancer cells, the lncRNA SNHG1-specific Si-SNHG1 was synthesised and transfected into SW480 and LoVo cells. As shown in Figure 2A, cells transfected with Si-SNHG1 obviously reduced mRNA expression level of SNHG1 compared with the Si-NC group in both cells by qRT-PCR (**P<0.01; Figure 2A). To evaluate the influence of SNHG1 on the proliferation of colorectal cancer cell in vitro, MTS assays verified that the silencing of SNHG1 apparently abrogated the proliferation rate of SW480 and LoVo cells (**P<0.01; Figure 2B and 2C). Furthermore, colony formation assay was carried out to further examine the effect of SNHG1 on growth of SW480 cells and LoVo cells. Similarly, the results indicated that colorectal cancer cells transfected with siRNA dramatically attenuated the colony numbers (**P<0.01; Figure 2D). In addition, flow cytometry was used to analyze cell cycle distribution of SNHG1 knockdown cancer cell. The results demonstrated that the cell population in the G0/G1 phase was boosted but the S phase population was decreased after the knockdown of SNHG1 compared to the results examined for the Si-NC cells (Figure 2E), further confirming that downregulation of SNHG1 expression might disturb cancer cell proliferation by disrupting the cell cycle. In a word, these data exhibited that SNHG1 may function as an oncogene through facilitating colorectal cancer cell growth. 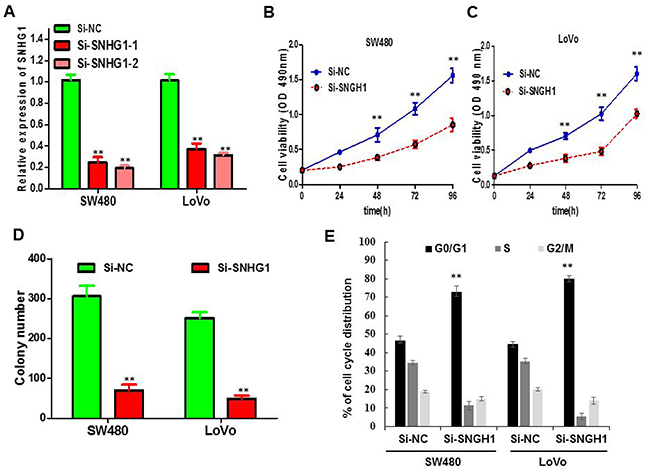 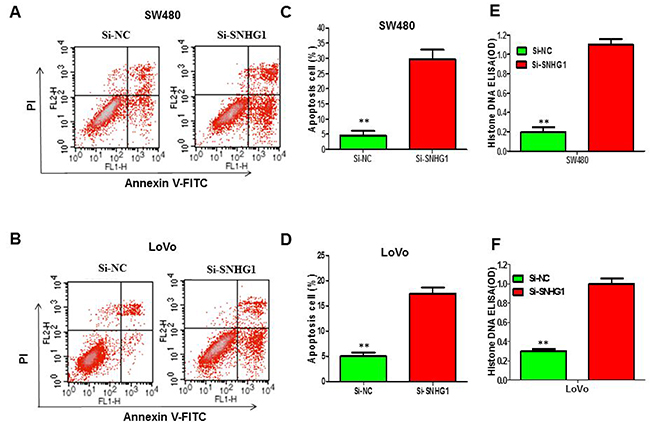 Figure 3: Suppression of lncRNA SNHG1 expression obviously enhanced the apoptosis of colorectal cancer cells. (A) and (B) Apoptosis of SW480 and LoVo cell lines was determined by flow cytometry. (C) and (D) Histogram of percentage of apoptotic cells, according to (A) and (B). (E) and (F) Histone DNA ELISA assay was used to measure the apoptosis of SW480 and LoVo cell lines. Each assay was performed in triplicate. Data are mean ± SD. *P<0.05, **P<0.01.

To further examine the effect of SNHG1 in cell migration and invasion, transwell assays were conducted in SW480 cells and LoVo cells. Downregulation of SNHG1 dramatically diminished SW480 and LoVo cell migration capability compared with the Si-NC group (**P<0.01, Figure 4A and 4B). We further performed transwell invasion assay to explore the effect of SNHG1 on the invasiveness of colorectal cancer cells. These results confirmed that downregulation of SNHG1 robustly inhibited the ability of cell invasion compared with the Si-NC group (**P<0.01, Figure 4C and 4D). 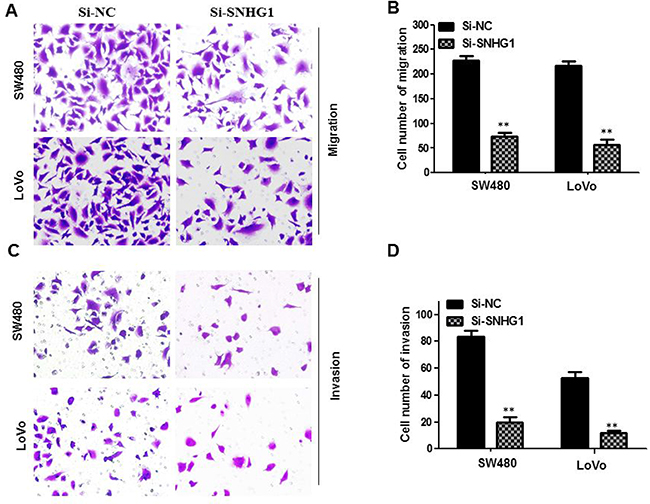 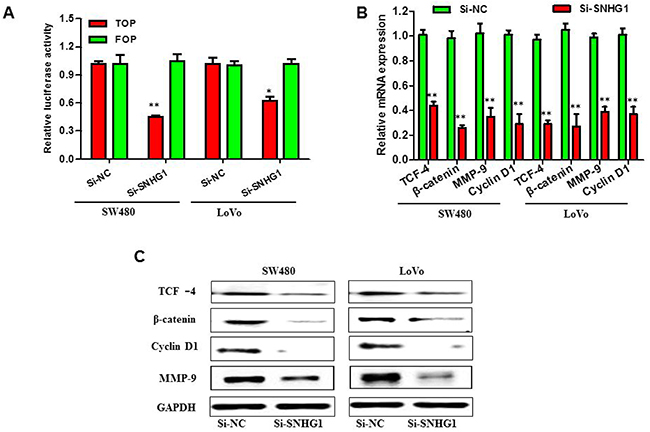 SNHG1 has been shown to be strikingly increased in several cancer and up-regulation of SNHG1 indicated the poor prognosis of tumor patients, and silencing of SNHG1 expression contributed to suppression of cancer cell proliferation or growth, diminishment of migration and invasion, inducement of apoptosis in non-small cell lung cancer, prostate cancer, glioma, primary esophageal cancer cells and hepatocellular carcinoma [13, 14, 16, 17, 30]. However, to our knowledge, the clinical significance and biological function of lncRNA SNHG1 in colorectal cancer remains largely unknown. Our data in the present study showed remarkable increase in SNHG1 expression in colorectal cancer tissues compared with adjacent non-cancerous colorectal tissues. Further analysis showed that the up-regulation of SNHG1 was positively associated with the tumor diameter, histological differentiation, TNM stage, lymph node metastasis, depth of invasion.

Recent reports suggest that lncRNAs play crucial role in cancer growth and metastasis. Long non-coding RNA GAS5 inhibits cell proliferation, induces G0/G1 arrest and apoptosis, and functions as a prognostic marker in colorectal cancer [31]. Over-expressed long noncoding RNA HOXA11-AS promotes cell cycle progression and metastasis in gastric cancer [32]. We then examined the function of SNHG1 in CRC cells by loss of function methods. Inhibition of SNHG1 dramatically restrained the growth of colorectal cancer cells by MTS assay and colony formation, arrested cell cycle and induced the cell apoptosis by flow cytometry, as well as attenuated migration and invasion of CRC cells by transwell assay in vitro, indicating that SNHG1 may serve as an oncogene that promotes CRC malignant progression.

Altogether, we provided the evidence for the first time that the SNHG1 expression is predominantly augmented in colorectal cancer compared to paired-adjacent non-tumorous tissues, and demonstrated that SNHG1 may play a key oncogenic role as a predictor of poor survival and a negative prognostic factor for patients with colorectal cancer. We also elucidated that knockdown of SNHG1 may decrease proliferation, arrest cell cycle, promote apoptosis, limit migration and invasion of colorectal cancer cells. Notably, mechanistic analysis revealed a novel SNHG1-β-catenin-WNT signaling pathway regulatory network in CRC. These new findings suggested that SNHG1 may be used as a potential prognostic and therapeutic target of colorectal cancer.

108 pairs of colorectal cancer tissues and the pair-matched adjacent non-tumor tissues were acquired from the Zhejiang Cancer Hospital between Jun 2011 and Feb 2012. All the patients received partial or radical cystectomy. All specimens were frozen immediately in liquid nitrogen and stored at −80°C until RNA extraction. None of the patients from whom the samples were obtained had undergone preoperative local or systemic treatment. Informed consents were collected from all patients and this study was approved by the Clinical Research Ethics Committee at the Zhejiang Cancer Hospital.

Cell proliferation detection kit (MTS) (cellTiter96AQ, Promega, Madison, WI) was used to evaluate the cell viability according to the manufacturer’s protocol. Cells were seeded into 96-well plates 24 h after transfected specific siRNAs at a density of 3×103 cells/well. Cell viability was detected at different time points (24, 48, 72, and 96 h). Absorbance was measured at 490 nm with SpectraMax® M5 (Thermo Fisher Scientific). Experiments were performed in triplicate.

Transfected cells were plated in 6-well plates at a density of 500-800 cells per well and incubated for two weeks. At the end of incubation, the cells were gently washed with PBS and then fixed with methanol for 10 min and stained with 0.1% crystal violet (Sigma). The number of colonies (more than 50 cells as a colony) was captured with a microscope and counted by Image J software (NIH, Bethesda, MD) from three independent replicates.

The cell apoptosis was determined by the Annexin V-FITC apoptosis kit (BD Biosciences, USA) according to the manufacturer’s guide. Briefly, cells were harvested and washed with PBS, stained in 500μl binding buffer with 5μl of Annexin V-FITC (BD Biosciences) for 15 min and 5μl PI for another 5 min. Apoptosis were measured by flow cytometry (BD Biosciences, FACS Calibur). For the cell cycle analysis, cells were harvested and washed with cold PBS, fixed with 75 % ice-cold ethanol at −20°C overnight, stained with propidium iodide (PI) dye solution (Sigma) supplemented 0.1 mg/ml Rnase A (Promega) for 30 min at room temperature. The cell cycle distribution was analyzed by flow cytometry (FACSCalibur, BD Biosciences).

The cell apoptosis was assessed by the Cell Apoptosis Histone-DNA ELISA Kit (Roche Applied Science, Shanghai, China) according to the manufacturer’s instructions. Detailed procedures can be found in other studies [37]. Briefly, the cells were lysed and the cell lysates were collected and incubated in well coated with anti-Histone antibody. Samples were then incubated with horseradish peroxidase–conjugated anti-DNA antibodies followed by color reaction with ABTS substrate. The absorbance of the samples were measured with a microplate reader at 405 nm.

This assay was performed as described previously [19]. Migration and invasion experiments in vitro were performed in the 24-well plate of 8-μm transwell chamber (BD Biosciences, USA) with or without Matrigel (1:3 mixed with PBS; BD Falcon™). Cells transfected (1 × 105 cells per well) were suspended in 100μl serum-free medium and then plated onto the top chamber in the 24-well plate, and the lower chamber of each well insert was filled with 600μl serum-containing medium. After 24h of incubation at 37°C, the cells that migrated or invaded into the lower chambers were fixed with 4% paraformaldehyde, washed with PBS, stained with crystal violet and then counted under a light microscope (Olympus, Tokyo, Japan) at ×100 magnification in five randomly selected fields across the center and the periphery of the membrane. Experiments were performed in triplicate.