Background/Aim: The current indication for endoscopic resection in early gastric cancer (EGC) with minute (< 500 μm) submucosal invasion is based on tumor diameter, which may be insufficient to predict lymph node metastasis (LNM). We investigated whether tumor volume might more accurately predict LNM in EGC with minute submucosal invasion.

Conclusions: Tumor volume had no advantage over diameter for predicting LNM in well/moderately differentiated EGC with minute submucosal invasion.

Endoscopic resection is considered to be the optimal treatment in select patients with early gastric cancer (EGC) [1, 2]. The criteria for patient selection are based on the Japanese treatment guideline [3]. However, the limited ability to predict lymph node metastasis (LNM) in patients undergoing endoscopic resection for EGC remains a major obstacle, and more accurate prediction plays an important role in determining whether the patient should undergo endoscopic resection or surgery. Patients with gastric cancer with submucosal invasion have considerably high incidence of LNM (10%–20%) [4, 5], and as such, have been excluded from endoscopic resection. However, Gotoda [4] proposed an expanded indication for endoscopic submucosal dissection (ESD) including minute submucosal cancer (pT1b, SM1, < 500 μm from the muscularis mucosae) with tumor size ≤ 3 cm and differentiated histology [3]. However, recent studies have reported high incidence of LNM in tumors satisfying these criteria, and thus, the validity of the expanded indication remains controversial [6, 7].

Among the dimensional variables of the primary tumor, maximum tumor diameter and invasion depth are considered to be important predictors for LNM and have been included in endoscopic resection criteria. However, this approach lacks the capacity for panoramic investigation. Recent studies regarding tumors at sites other than the stomach have suggested that tumor diameter may not precisely reflect tumor burden and that 3-dimensional tumor volume may better predict LNM [8–11]. In particular, histologic or radiologic tumor volume in nasopharyngeal, prostate, gastric, and gynecologic cancers has been reported to be associated with prognosis [10, 12–17].

Therefore, the aim of this study was to investigate whether 3-dimensional tumor volume might predict LNM more accurately than 1-dimensional tumor diameter in well/moderately differentiated EGC with minute submucosal invasion.

Baseline characteristics according to LNM

LNM rate according to tumor diameter or volume is shown in Table 2. There was no LNM for tumors ≤ 0.5 cm in diameter or ≤ 50 cm3 in volume. Maximum tumor diameter and volume without LNM was ≤ 0.9 cm and ≤ 65.5 cm3, respectively. LNM rate of tumors satisfying the expanded endoscopic resection criteria (well/moderately differentiated, SM1, ≤ 3 cm) was 3.6% (8/221).

Table 2: Lymph node metastasis rate according to the tumor length and volume

Figure 1: Receiver operating characteristic curve analysis of tumor diameter (A) and volume (B).

This study evaluated the predictive value of tumor volume for LNM, compared with the conventionally used tumor diameter, using data of gastrectomy with well/moderately differentiated SM1 (< 500 μm) gastric cancer. We hypothesized that tumor volume would help clinicians to predict LNM more accurately than tumor diameter when choosing the optimal treatment modality for individual cases after endoscopic resection. However, tumor volume failed to predict LNM, and the performance of the 2 models showed no significant differences.

Solid tumors are 3-dimensional structures with unequal rates of tumor spread in different directions and planes, and as such, diameter does not accurately reflect total tumor volume or total malignant cell burden [8]. Therefore, several studies have been conducted to assess the ability of tumor volume to predict LNM [8, 10, 11, 14, 23]. A recent study showed that gross tumor volume measured on multidetector computed tomography (CT) was associated with regional LNM and N categories in resectable gastric adenocarcinoma [24]. EGC is frequently undetectable on CT, and planar size estimation by endoscopic examination is the only way to determine tumor extent. However, after endoscopic resection, the resected specimen undergoes pathologic evaluation, and patients with noncurative resection are recommended to undergo additional surgery for risk of LNM. If tumor volume measured using endoscopically resected specimens predicted LNM better than 1-dimensional size, it could be a useful tool for determining treatment strategy after endoscopic resection. This was, to our knowledge, the first study to evaluate the association between tumor volume and LNM, and to compare the predictive ability for LNM of 1- or 3-dimensional size, in EGC with minute submucosal invasion. Three-dimensional volume of the primary tumor was calculated using endoscopically resected specimens, with precise depth of tumor invasion assessed by expert pathologists. However, this study showed that sensitivity, specificity, predictive value, and accuracy were not significantly different between 1- and 3-dimensional methods. Our data also confirm the cutoff criterion (tumor size < 3 cm) defined by Gotoda [4].

This study has several limitations. First, the total number of cases was small, including only those with minute submucosal gastric cancer at a single center. Second, the same formula was used in every case to estimate tumor volume. However, tumors have various shapes, such as rectangular, cuboidal, or ellipsoid, and ideally, different formulas should be used to calculate tumor volume [25]. However, this was not considered as this was a retrospective study.

In conclusion, our findings showed that tumor volume had no advantage over tumor diameter for predicting LNM in well/moderately differentiated EGC with minute submucosal invasion, unlike advanced gastric cancer. Future studies with more accurate methods to measure tumor volume may show different results.

We used prospectively collected data of patients who underwent gastrectomy for gastric cancer at Samsung Medical Center, Seoul, Korea, from January 2002 to December 2013. Patients underwent open or laparoscopic, subtotal or total gastrectomy depending on tumor location, with D1+ or D2 lymphadenectomy according to the Japanese treatment guideline [3]. Of these patients (n = 8352), those with well/moderately differentiated EGC with SM1 depth of invasion were included in this study. This study was approved by the Institutional Review Board of Samsung Medical Center.

Patient data including age, sex, presence of synchronous tumor, extent of surgery (distal, proximal, or total), and surgical approach (open vs laparoscopic) were collected. Number of dissected lymph nodes was described as mean (SD). Tumor location was categorized as upper-, middle-, or lower-third of the stomach. Macroscopic type was reported based on pathologic findings according to the Japanese guideline [18] and categorized into 1 of 4 groups: elevated (I, IIa, I + IIa, IIa + IIb), flat (IIb), depressed (IIc, IIc + III), or mixed (others). Histologic type was classified according to the 2010 World Health Organization classification [26] and categorized according to the Japanese guideline [27]. Differentiated type included papillary adenocarcinoma as well as well- and moderately differentiated tubular adenocarcinoma, while undifferentiated type included poorly differentiated tubular adenocarcinoma and signet ring cell carcinoma. Tumors composed of both differentiated and undifferentiated types were classified according to the quantitatively predominant type [27]. Lymphovascular invasion was defined when tumor emboli were found within a space that was clearly lined by endothelial cells. Lymph nodes larger than 5 mm were cut into 2 pieces and the cut surfaces were examined to determine presence of metastasis in each node. Tumor staging was carried out according to the American Joint Committee on Cancer classification system (7th edition) [28].

Surgical specimens were fixed in 10% formalin, processed, and embedded in paraffin, and then stained with hematoxylin and eosin using the standard protocol. Tumor diameter (or size) was defined as the longest diameter, and tumor width as the maximum width perpendicular to the diameter. Slides with the deepest infiltrated tumor cells were selected and scanned using the Ventana iScan HT slide scanner (Ventana Medical Systems, Tucson, AZ, USA) with a 20× objective lens. Depth of invasion was defined as the depth perpendicular to an imaginary line drawn from the adjacent muscularis mucosae (Figure 2) [29]. Estimated tumor volume was calculated using the following equation: 0.5 × diameter × width × depth [9, 10]. 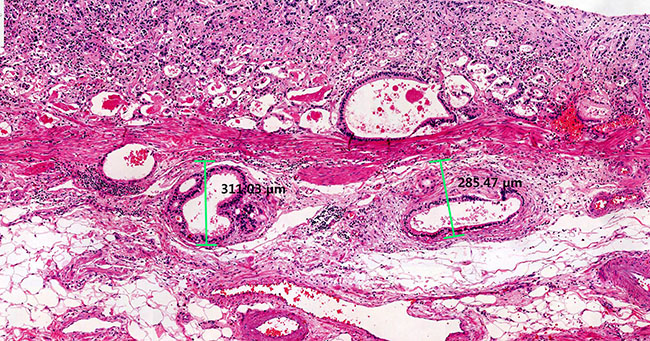 Baseline characteristics were analyzed between patients with or without LNM using the Mann-Whitney U test for continuous variables and the Chi-square test or Fisher’s exact test for categorical variables. ROC curve analysis was used to estimate the optimal cutoff value of tumor volume for predicting LNM. The result of ROC analysis was validated by performing the 10,000 bootstrap resampling method. Predictive ability of tumor diameter or volume for LNM was evaluated based on the AUC of the ROC curve, and sensitivity, specificity, positive predictive value, negative predictive value, and accuracy were calculated. DeLong’s test was used to compare the AUCs of the 2 correlated ROC curves [30]. Logistic regression analysis was used to analyze risk factors for LNM. All statistical analyses were performed using SAS version 9.4 (SAS Institute, Cary, NC, USA), and P values of < 0.05 were considered statistically significant.

16. McNeal JE. Cancer volume and site of origin of adenocarcinoma in the prostate: relationship to local and distant spread. Hum Pathol. 1992; 23:258–266.