Materials and Methods: Records for all EC patients aged ≥ 65 years were extracted from the Surveillance, Epidemiology, and End Results database. Chi-square test compared the characteristic and treatment between patients aged ≥ 80 with those aged 65–79. Focusing on patients aged ≥ 80, we employed multivariable logistic regression to identify the association between selection of RT and patients’ characteristics. Survival curve was employed to visualize the survival rate and multivariable Cox proportional hazard model was established to quantify the effect of RT on overall survival (OS) and cancer special survival (CSS).

Conclusions: Our study suggested EC patients aged ≥ 80 benefit from RT only if the cancer is in localized/regional stage.

Esophageal cancer (EC) is the one of the most common and fatal malignant tumor worldwide [1]. It is estimated over 15,000 Americans will die from EC in 2017 [2]. EC patients have a median age of 67 years at diagnosis [3, 4]. Aging of population leads to elder EC patients these years. This elder group need special recommendations on treatment and medical care [5].

The Surveillance, Epidemiology, and End Results (SEER) Program of the National Cancer Institute (NCI) provides an authoritative source of information about cancer incidence and survival in the United States. SEER currently collects and publishes cancer incidence and survival data from population-based cancer registries covering approximately 28% of the U.S. population. The SEER program is the only comprehensive source providing information about stage of the cancer at the time of diagnosis and patient survival data [11].

We investigated the survival rate, clinicopathologic characteristics including stage distribution and treatment status of EC patients aged ≥ 80 years at the different periods of time. Among EC patients aged ≥ 80 years diagnosed between 2004–2013, only 14.4% patients had been treated with surgery, while 64.0% patient ultimately received RT. The RT served as the main treatment for the patients all over the period. The MST and 1, 3, 5-year overall survival rate increased over the years. Detailed characteristics were presented in Supplementary Table 2.

We further investigated possible characteristics associated with RT in patients aged ≥ 80. We removed the patients treated by surgery to exclude its interference. A total of 2,066 EC patients aged ≥ 80 were eligible for further analysis by multivariable logistic regression analysis and models were adjusted for potential confounders listed in Table 1. Our results showed the proportion of patients treated by RT decreased significantly across 40 years period (1994–2003, odds ratio (OR) = 0.582; 2004–2013, OR = 0.450). Selection of RT were associated with histology (P < 0.001), grade (P = 0.024) and stage (P < 0.001). Patients with regional stage cancer were more likely to receive RT as compared to patients with localized (81.2% vs. 72.2%, OR = 1.880), but a reverse trend was seen in distant stage (OR = 0.757).

Table 1: Association between selection of RT and characteristics of EC patients aged ≥ 80

*ORs were derived from multivariable logistic regression analysis, and models were adjusted for all confounding factors listed in the table.

*HRs were derived from multivariable Cox proportional hazards regression analysis, and models were adjusted for all confounding factors listed in the table.

Finally, we delineated the effect of RT on survival in EC patients aged ≥ 80 using stratified survival curves. As shown in Figure 2, RT significantly improved the patients’ OS and CSS in localized and regional cases, but not in cases with distant stage which validated this finding. 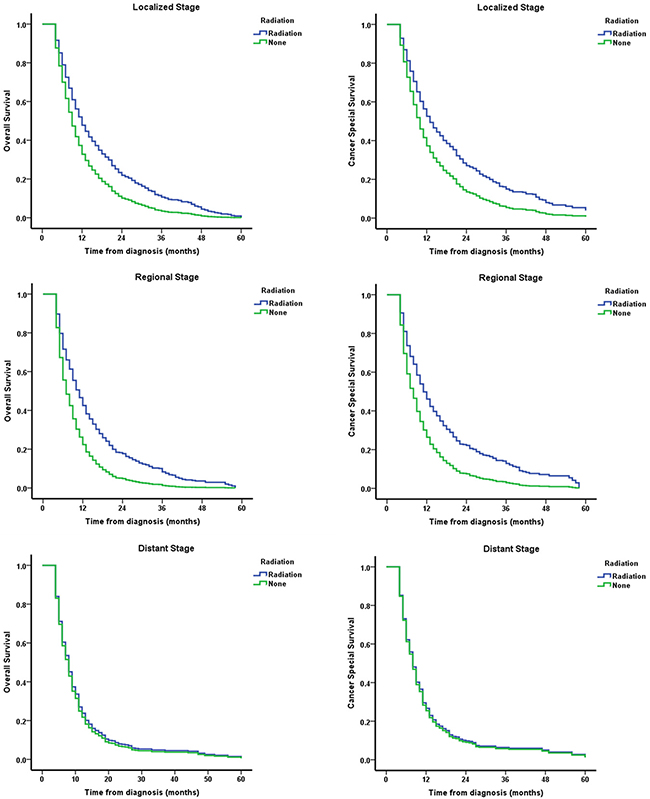 RT and surgery are two main treatments strategies for EC, especially localized EC [12]. Although there were more localized patients in EC patients aged ≥ 80 in the cohort, we found a significant decrease of surgery rate and RT overweighed surgery as the main treatment for this group of patients. Our findings confirmed that the importance of RT in EC patients aged ≥ 80. We also evaluated the survival benefit of RT in this special group and survival analysis showed that RT was prognostic factor of OS and CSS. In multivariate analysis, RT increased both OS and CSS, and benefit of CSS was slightly higher than that of OS. Previous studies reported elderly patients with EC including those aged ≥ 80 benefit from RT [13–15]. Our findings confirmed the therapeutic benefit for EC patients aged ≥ 80 in a much larger sample size.

Only a very few number of EC patients aged ≥ 80 received surgery. To focus on evaluating the benefit of RT, we ruled out this group of patients. It should be noted that, due to the lack of medical information in the SEER database, we were unable to obtain details of chemotherapy. Potential chemotherapy may influence survival, which lead to biased results. However, patients aged ≥ 80 are mostly unlikely to tolerate chemotherapy [19, 20]. We have also excluded patients followed up less than 4 months to minimize the effect of chemotherapy in our survival analysis.

Survival time was evaluated using evaluated OS and CSS. Survival data was extracted at 1-month intervals for a minimum follow-up of 4 months and a maximal follow-up of 60 months to minimize the effect of chemotherapy and exclude patients not survive long enough to receive cancer-directed therapy. OS was determined from the SEER records of survival time (total No. of months) and vital status. CSS was determined from the SEER cause-specific death classification variable and was evaluated from the date of diagnosis to the date of EC specific death.

Enrolled patients were first divided into 2 subgroups by age: 65–79 and over 80. Patient’s characteristics and treatment were compared by Chi-square test. Subsequently, focusing on survival evaluation of RT, patients aged between 65–79 and patients who received surgery were ruled out from further analysis (Figure 3). Multivariable logistic regression was employed to investigate the potential influencing factors on patients’ selection upon RT. Multivariable Cox proportional hazard model was established to quantify the effect of RT on OS and CSS adjusting for year of diagnosis, race, sex, histology grade and stage. Survival curve was employed to visualize the survival condition of RT and NRT group. Finally, staged stratified survival was delineated by survival curve and Cox regression adjusted for the same variables described above. Significance was identified according to predefined threshold 0.05. All statistical analyses were implemented using the statistical analysis software SPSS 22.0 for Windows (SPSS, Inc., Chicago, IL, USA). 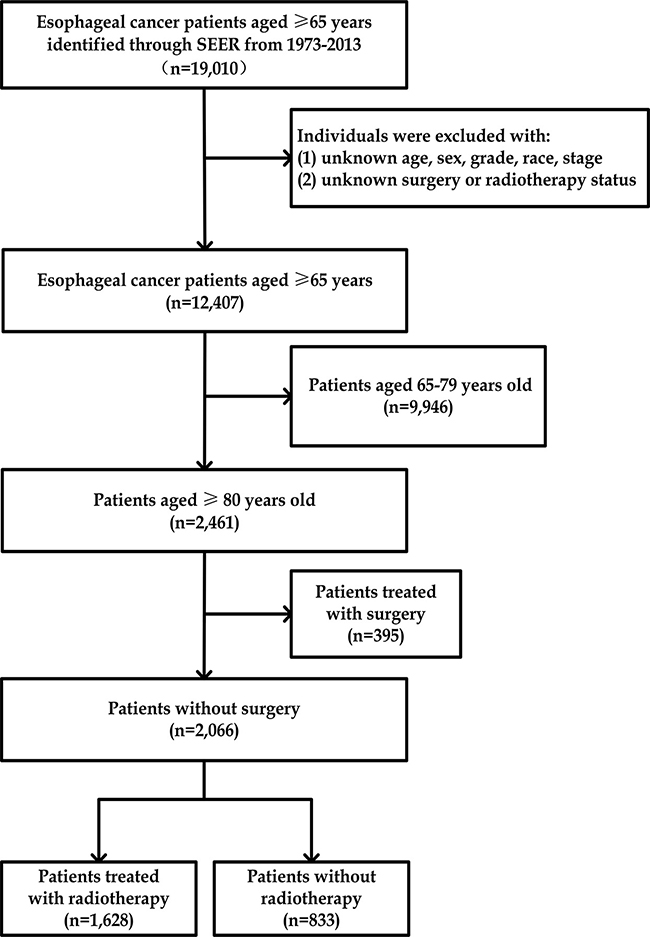 12. Worni M, Castleberry AW, Gloor B, Pietrobon R, Haney JC, D'Amico TA, Akushevich I, Berry MF. Trends and outcomes in the use of surgery and radiation for the treatment of locally advanced esophageal cancer: a propensity score adjusted analysis of the surveillance, epidemiology, and end results registry from 1998 to 2008. Dis Esophagus. 2014; 27:662–9. https://doi.org/10.1111/dote.12123.