Conclusion: Our results suggested that CCT3 played a critical role in gastric cancer growth and survival. Further studies on the mechanisms of CCT3 function is mandated to develop novel cancer treatment targeting CCT3.

Gastric cancer is the fourth most common malignancy worldwide and the second most common and lethal cancer in China. It was estimated that gastric cancer caused 498,000 deaths in China in 2015 [1]. Risk factors for gastric cancer, such as H. pylori infection, smoking and dietary toxin have been well established, allowing for implementation of primary prevention strategies. However, molecular mechanisms for gastric cancer development remain largely unknown. The identification of key molecules and pathways in gastric cancer is a critical step to the cure of the deadly disease. The molecular chaperone network (including chaperons and chaperonins) plays a central role in maintaining protein homeostasis (proteostasis) and proteome integrity. In the cytosol, a diverse group of chaperones cooperate in evolutionarily conserved pathways to guide the folding, intracellular localization, and proteolytic turnover of proteins [2]. The primary functions of molecular chaperones rely on their ability to transiently bind to hydrophobic regions of nascent or stress-denatured polypeptides and prevent misfolding or aggregation of the proteins. In addition to their pivotal role in ensuring proper folding of polypeptides, molecular chaperones play active role in protein degradation by maintaining target proteins in unfolded state [3]. For aggregated proteins that cannot be unfolded, chaperone-mediated autophagy or chaperone-assisted selective autophagy pathways are required for removal of the damaged proteins [4–6]. Proteostasis is vital for normal cellular functions and thus, disrupted proteostasis underlies various diseases and conditions including cancers. Inevitably, members of molecular chaperone pathway have been implicated in the development of cancers [7–9].

Chaperonin containing TCP-1 (CCT, also known as TRiC) belongs to group II (eukaryotic) chaperonin family, which is estimated to interact with 5-10% of proteome and is essential for cell survival [10]. CCT features a cylindrical architecture composed of two rings stacked opposite one another. The central cavity of CCT encapsulate substrate protein molecule, one at a time, allowing for proper folding without aggregation. Each ring is composed of 8 homologous but distinct subunits (CCT1-8), which recognize different motif within substrate proteins. The specific arrangement of these subunits provides the ability to fold certain proteins that cannot be folded by simpler heat shock protein family.

CCT has been shown to mediate the folding of a number of proteins implicated in oncogenesis such as tumor suppressor Von Hippel-Lindau (VHL), p53, pro-oncogenic proteins signal transducer and activator of transcription 3 (STAT3), and cell cycle regulatory proteins cell division cycle protein 20 (CDC20) [11–14]. Evidence is now emerging that CCT and its subunits are critical for the development of breast cancer and acute myeloid leukemia [15, 16]. More recent studies have shown CCT subunit 3 (CCT3) upregulation in hepatocellular carcinoma (HCC), cholangiocarcinoma and colon cancer [17–19], and that overexpression of CCT3 in HCC patients is associated with poor prognosis [20]. 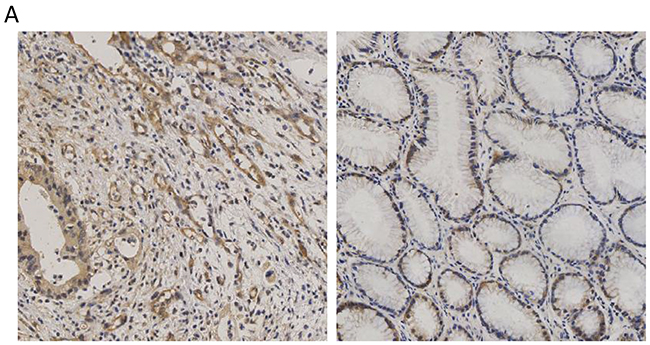 Table 1: Expression of CCT3 in gastric cancer and non-cancerous tissue

To investigate the possible role of CCT3 in gastric cancer cell growth and survival, lentivirus expressing short hairpin RNA targeting CCT3 mRNA (shCCT3-1 and shCCT3-2) was used to infect human gastric cancer cell lines BGC-823 and MGC-803. Then the silencing effect of CCT3 in BGC-823 and MGC-803 cells was measured by qRT-PCR. After infection, the expression of CCT3 gene decreased by 94.6% and 95.7% in BGC-823 and MGC-803 cells compared with the shCtrl group, respectively. Knockdown of CCT3 protein expression in the gastric cancer lines was also confirmed by Western blotting. (Figure 2A). Silencing CCT3 also affected the proliferation of cell lines that was analyzed by MTT assays. With a dramatic decrease of CCT3 expression, the proliferation of the cancer cells in culture was significantly inhibited as shown by a nearly flat growth curve after lentiviral infection (Figure 2B). In addition, the colony-forming ability was clearly suppressed in shCCT3-1 and shCCT3-2 expressing cancer cells (Figure 2C), indicating a lower duplicating potential associated with CCT3 knockdown (P<0.01, t-test). In general, the results above suggested that expression of CCT3 is critical for gastric cancer cell proliferation. 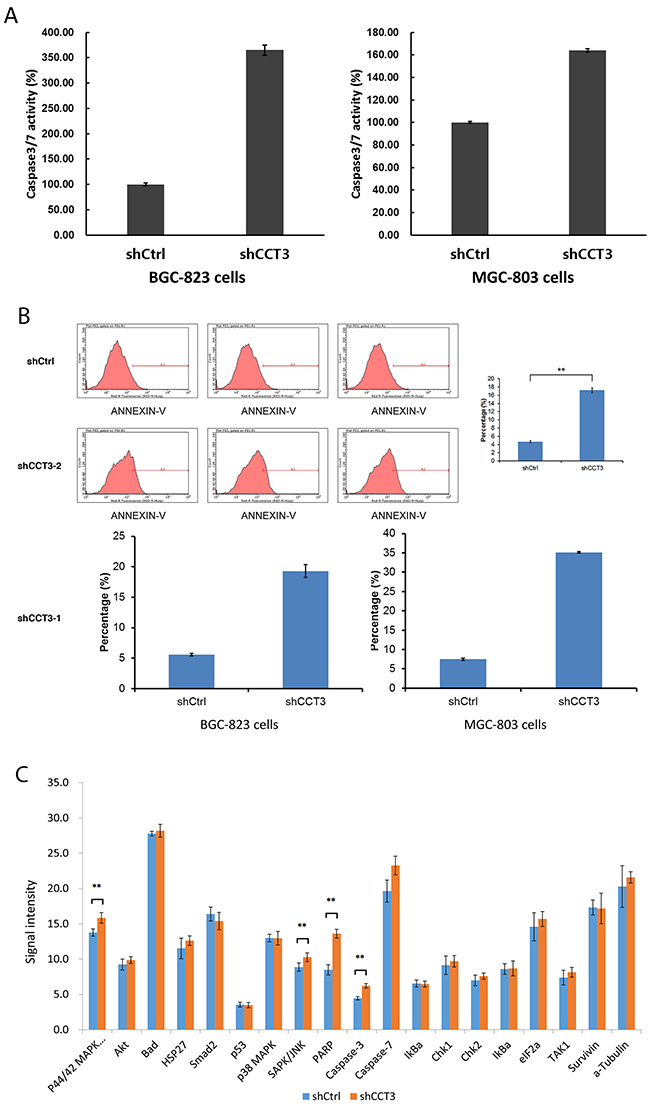 Figure 3: Knockdown of CCT3 promoted gastric cancer cell apoptosis. (A) Activity of caspase 3/7 increased after knockdown of CCT3 in BGC-823 and MGC-803 cells. (B) Knockdown of CCT3 induced apoptosis in BGC-823 and MGC-803 cells. Increased number of apoptosis events were detected in shCCT3-1 and shCCT3-2 lentivirus infected gastric cancer cells, as shown by Annexin-V staining and FACS. (C) Antibody array detection of stress and apoptosis signaling molecules in BGC-823 cells with or without CCT3 knockdown. Increased expression of P44/42 MAPK, SAPK/JNK, PARP, Caspase-3 and -7 were shown in CCT3 knockdown cells. ** p<0.05, t-test.

Now that a decreased CCT3 expression was shown to inhibit proliferation and promote apoptosis in gastric cancer cell lines in vitro (Figures 3A, 4B), it would be interesting to see if CCT3 knockdown confer any anti-tumor activity in vivo. To study the effects of CCT3 knockdown on xenograft tumor growth, BGC-823 cells infected with shCCT3-1 lentivirus or control virus were transplanted into nude mice. The growth of the cancer cells in the animals were monitored for 19 days. The results showed suppressed in vivo tumor growth with CCT3 knockdown (Figure 4A, 4B). Compared with NC group, the weight and volume of tumors in KD group were significantly reduced (P<0.05, t-test). The results suggested that CCT3 also act an important role in cell growth in vivo. 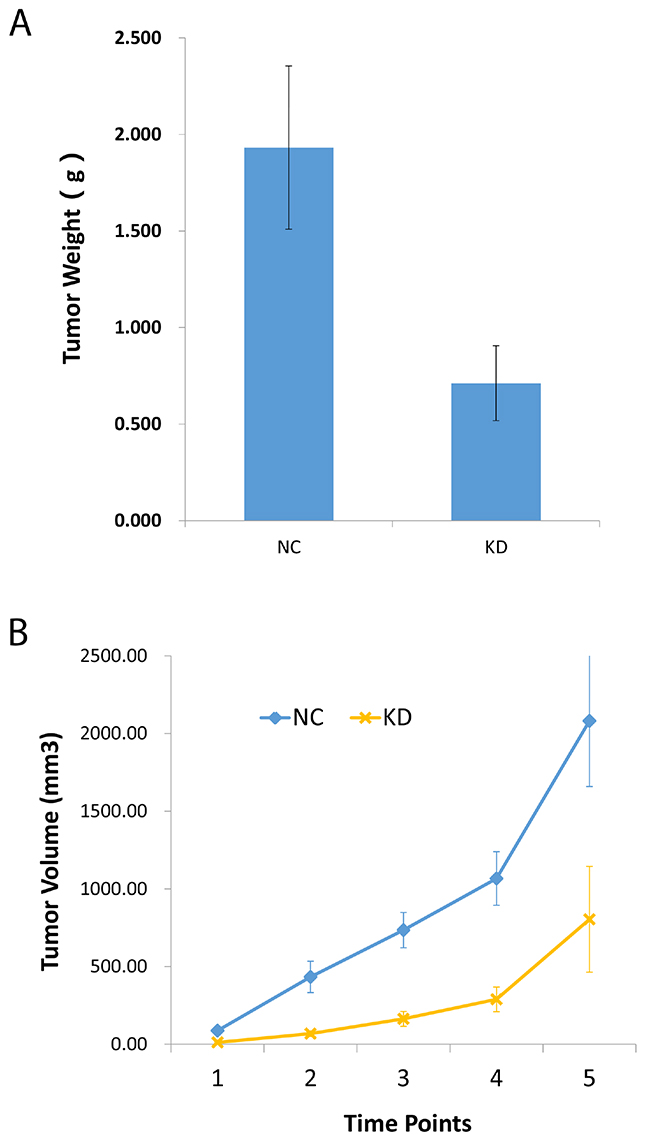 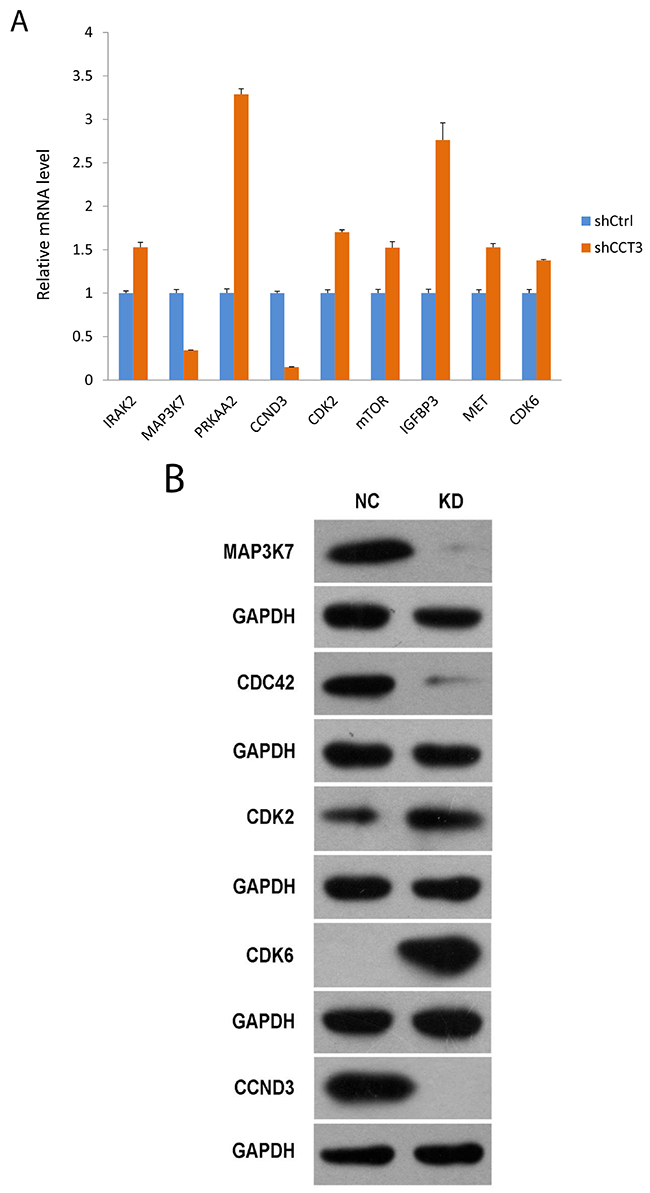 Group II chaperonin CCT has been shown to modulate the folding of cellular proteins involved in oncogenesis, such as VHL, p53, STAT3 and cell cycle regulator CDC20. Recently, CCT/TRiC was also demonstrated to facilitate the folding of AML1-ETO, an oncofusion protein responsible for the development of acute myeloid leukemia. With a large number of substrates representing a broad spectrum of functionalities, CCT is probably involved in many other oncogenesis pathways. It is not surprising that CCT or its subunits have been implicated in the development of various types of cancers, such as breast [15, 22], liver [17, 20, 23], colon [24, 25], lung cancer [26] and glioma [27]. However, little is known regarding the role of CCT3 in the development of gastric cancer. In this report, we demonstrated that CCT3 was upregulated in the primary gastric cancer tissues and knockdown of CCT3 expression in the gastric cancer cell lines suppresses cancer cell proliferation and promote apoptosis. These results were similar to those observed in CCT1 and CCT8 knockdown experiments [23, 28], suggesting a common effect of reduced TRiC assembly due to knockdown of CCT subunits.

The CCT subunits may function as part of the chaperonin complex to orchestrate protein folding. However, the precise mechanism of action of the system remains to be elucidated. The CCT subunits have greatly diverged substrate-binding domains, which are predicted to allow for specific substrate interaction [29]. It is possible that deficit in one CCT subunits might affect certain substrates more readily than others do. In the study reported by Huang et al., knockdown of CCT8 dramatically reduced the level of CDK2 in hepatocellular carcinoma cells [23]. In our study, knockdown of CCT3 increased CDK2 and CDK6 level. The reason behind this discrepancy is unknown. CDK6-cyclin D is responsible for limited phosphorylation of the retinoblastoma tumor suppressor (Rb) protein. And activation of CDK2-cyclin E leads to further phosphorylation and inactivation of pRb, release of E2F, and full commitment to S-phase entry [32]. It could be that folding of CDK2 depends on specific interaction with CCT8 but not CCT3. The other possibility could be that CCT or its subunits might play different roles in different cancer cells.

Moreover, it was postulated that individual CCT subunits might also function independently without forming the hetero-oligomeric complex [30]. For instance, CCT4 and CCT5 homo-oligomers have been found to form 8-fold double rings absent the other subunits. And the CCT4 or CCT5 oligomer rings exhibited activities of ATP hydrolysis and protein folding comparable to the TRiC ring [31]. Whether CCT3 have any functional autonomy is currently unknown. It is possible that CCT3 might play a more specific role in gastric cancer cells other than functioning as a component of TRiC. Our study has demonstrated a critical role of CCT3 in the growth and survival of gastric cancer cells. Further studies to determine specific substrates for CCT3 and the precise function of CCT3 in gastric cancer will help development of new cancer therapies targeting CCT3.

Informed consent was obtained from 26 patients who underwent gastric cancer resection. The paraffin-embedded tissue samples of primary tumors and adjacent non-cancerous tissues from these patients were stained for CCT3 with rabbit CCT3 antibody (1:50, Abcam, ab1774255) using standard Immunohistochemistry method. The intensity of the stain in cytoplasm was score as follows: “negative”=0; “weak”=1; “moderate”=2 and “strong”=3. The percentage of positively stained cells in a section was scored as 0%=0, 1-25%=1; 26-50%=2; 51-75%=3 and 76-100%=4. Only cancer cells and epithelial cells were evaluated for staining. The immunostaining score of a tissue section was expressed as the product of its intensity score and positive percentage score. An immunostaining score ≤6 was arbitrarily classified as low CCT3 expression and a score >6 high CCT3 expression. Four (4) sections of primary tumor and Four (4) sections of adjacent epithelia from each subject were evaluated. Totally 104 primary cancer sections and 104 non-cancerous sections were scored and assigned to high or low CCT3 expression group. Significant level was tested with Fisher’s exact test.

Human gastric cancer cell line MGC-803 and BGC-823 were maintained in RPMI-1640 medium containing 10% fetal bovine serum at 37°C with 5% CO2. Medium was changed every 3 days. Lentivirus infection was performed on cells at 80% confluency, with a multiplicity of infection (MOI) of 50. 72 hours after infection, the cells were used for downstream assay or transplantation.

After lentivirus infection, gastric cancer cell line MGC-803 and BGC-823 were plated on 96-well plates (2000 cells/well in triplicate). Five plates were prepared at the same time and each plate was tested at one of the time points: 24 hours, 48 hours, 72 hours, 96 hours and 120 hours. MTT (3-(4, 5-dimethylthiazolyl-2)-2, 5-diphenyltetrazolium bromide) was purchased from Genview (Houston TX, USA; JT343). MTT assay was performed following manufacturer’s instruction. The absorbance at 490nm (OD490) was then used as surrogate for cell number and plotted on the cell growth curve. Statistical significance was tested using t-test.

Lentivirus infected BGC-823 cells were selected with growth media containing 4μg/ml of Puromycin (Cat. 631305, Clontech, USA) for 48 hours. After selection, cells (4.0X106 cells per mouse) were harvested and injected subcutaneously to the right axilla of Balb/c Nude mice (female, 4 weeks old). The length (L) and width (W) of the tumor were measured at day 7, 11, 14, 17 and day 19 after transplantation. Tumor size was calculated as π/6×L×W2 (mm3). Animals were sacrificed at day 19 and the tumors were resected and weighed. Statistical significance was tested using t-test.

3. Shiber A, Ravid T. Chaperoning proteins for destruction: diverse roles of Hsp70 chaperones and their co-chaperones in targeting misfolded proteins to the proteasome. Biomolecules. 2014; 4:704-724.

30. Roobol A, Carden MJ. Subunits of the eukaryotic cytosolic chaperonin CCT do not always behave as components of a uniform hetero-oligomeric particle. Eur J Cell Biol. 1999; 78:21-32.