Purpose: To evaluate the safety and efficacy of radiation therapy for stage IVA uterine cervical cancer and to identify an optimal radiation regimen.

Conclusions: Radiation therapy is safe and effective for treatment of stage IVA uterine cervical cancer. The reduced radiation dose per fraction may contribute to the prevention of vesicovaginal fistula formation.

In 26 of the 28 patients, the initial response to treatment was disappearance or marked reduction of the primary tumor, and the remaining 2 patients showed no change. The objective response rate was 93%. However, 17 patients developed recurrence at a median time of 10 months (range, 1–52 months) after radiation therapy. Of these 17 patients, 10 had local recurrence in the pelvis within the radiation field (primary tumor progression in 9 and pelvic lymph node metastasis in 2), and 12 had distant metastases to the lung, liver, bone, and lymph nodes (such as the mediastinal and para-aortic lymph nodes situated outside the radiation field).

The local control and distant metastasis-free rates in all patients were 61% and 49%, respectively, at 3 years (Figure 1). 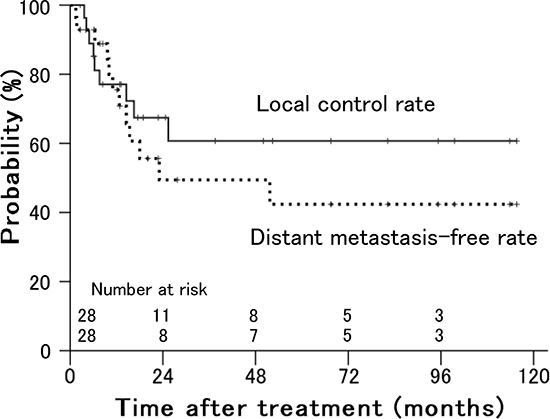 Fourteen of the 28 patients died at 4–50 months (median, 15 months) after radiation therapy. Of these 14 patients, 12 died of tumor progression and the other 2 of cancer-unrelated causes. There was no mortality associated with treatment. The remaining 14 patients survived during a median follow-up of 45 months (range, 3–116 months) after radiation therapy.

The disease-free, cause-specific, and overall survival rates at 3 years in all patients were 32%, 49%, and 45%, respectively, and the estimated median survival time was 32 months (Figure 2). 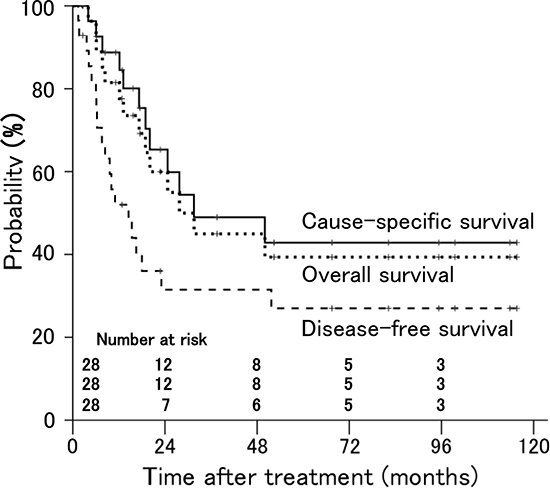 aThree patients with adenocarcinoma were excluded from this evaluation. 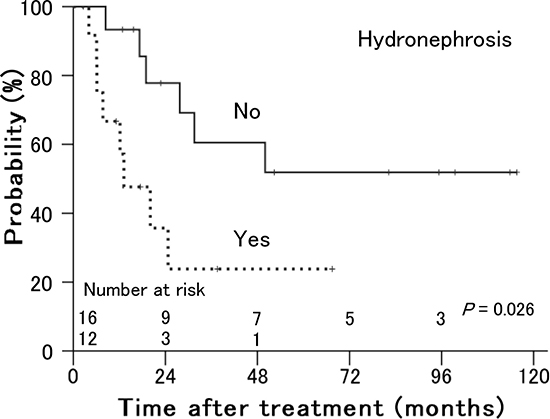 With respect to therapy-related late toxicities, 1 patient developed a grade 3 vesicovaginal fistula and 1 patient developed grade 3 radiation proctitis at 6 and 9 months after treatment, respectively. The patient with the vesicovaginal fistula had bladder invasion and received external irradiation plus intracavitary brachytherapy at a total dose of 131.9 Gy in the biological effective dose (BED3, α/β = 3) without chemotherapy. The patient with radiation proctitis received a total dose of 152.6 Gy in BED3 without chemotherapy.

Although radiation therapy has been applied in patients with stage IVA uterine cervical cancer, the recurrence rate is high and patient survival is poor. In patients with stage IVA uterine cervical cancer, local recurrence is the most common cause of failure after radiation therapy, but good local control was achieved in the present study. The total median dose of 73.3 Gy in the 2 Gy per fraction-equivalent dose at point A was lower than the dose of ≥ 80 Gy recommended by the American Brachytherapy Society for curative treatment of locally advanced cervical cancer [5]. However, it was close to the standard dose that has been widely used in Japan with good local control [6, 7]. Consequently, the local control rate of 61% at 3 years in the present study was good compared with the rate of 39–59% among patients with stage IVA uterine cervical cancer treated with radiation alone or chemoradiation in previous studies [8, 9].

Many patients with stage IVA disease had bulky tumors in the uterine cervix, with more than half the patients in this study having a cervical tumor of > 60 mm in diameter. Tumor size is an important variable affecting local control in patients at earlier stages. Landoni et al. carried out a randomized controlled trial involving 343 patients with stage IB–IIA uterine cervical cancer treated with surgery or radiation therapy [10]. In 167 patients treated with radiation therapy, patients with tumors of ≥ 4 cm in diameter had a > 2-fold higher local recurrence rate than patients with tumors of < 4 cm (30% vs. 11%, respectively) at median follow-up of 87 months. Similar results have been shown in many previous retrospective studies, and tumor size is an important and useful predictive variable for local control [11–13]. However, few studies have investigated whether tumor size affects local control in radiation therapy for stage IVA uterine cervical cancer alone. In the present study, tumor size was a significant prognostic factor for local control. Tumor size may be significant in stage IVA cancer as well as earlier stage cancer. Some authors have suggested that rectal invasion and the radiation dose to the cervical tumor are prognostic factors for local control, but neither was significant in our study [8, 9]. These outcomes may have been obtained because compared with previous studies, the number of patients with rectal invasion was smaller and almost-curative radiation doses were delivered to more patients in the present study.

In this study, all therapy-related acute toxicities were temporary and easily manageable. With the exception of hematological reactions, there were no grade ≥ 3 adverse events. All 3 patients with grade 3 leukopenia or thrombocytopenia underwent concurrent chemotherapy. No patients developed grade ≥ 4 acute toxicities. The concurrent use of chemotherapy with radiation therapy in the treatment of cervical cancer has been reported to significantly increase therapy-related acute toxicities, particularly hematological and gastrointestinal reactions [23, 25, 26]. The mild and negligible acute toxicities in the present study probably occurred because many patients were treated with radiation therapy alone without chemotherapy.

Patients with esophageal cancer characterized by T4 tumors with invasion into an adjacent structure frequently develop esophageal fistulas at a high rate of 10–29% following concurrent chemoradiotherapy [28, 29]. A recent report indicated that in the treatment of patients with T4 esophageal cancer, induction chemotherapy followed by chemoradiotherapy reduced the incidence of esophageal fistula to only 5% [30]. This result cannot be identically applied to patients with bladder invasion of uterine cervical cancer, but slow reduction in the tumor volume can be hypothesized to decrease the risk of fistula formation.

Both fraction sizes used in the present study (1.8 Gy for external pelvic irradiation and 5 Gy for HDR intracavitary brachytherapy) used mostly in the present study were lower than the conventionally and widely used 2 Gy and 6 Gy, respectively. This suggests that a lower radiation dose per fraction may contribute to a decreased incidence of vesicovaginal fistula formation.

The frequency of rectal invasion of uterine cervical cancer is lower than that of bladder invasion; patients with rectal invasion account for only 4–21% of all patients with stage IVA cancer [8, 9, 19, 20, 27]. In our study, only 4 patients (14%) had rectal invasion. Therefore, reports of rectovaginal fistula formation are limited, and the treatment risk remains unknown. Nevertheless, a few studies involving a small number of patients have been performed, and the authors reported that almost none of the patients with rectal invasion developed a rectovaginal fistula following radiation therapy [8, 9, 20, 27]. Similarly, none of the patients in the present study developed a rectovaginal fistula. These results suggest that the incidence of rectovaginal fistula may actually be low. In addition, only 1 patient (3%) developed grade 3 radiation proctitis as a late gastrointestinal adverse event. Grade ≥ 3 gastrointestinal toxicities, including radiation proctitis, occurred in 5–14% of patients with locally advanced cervical cancer treated with radiation therapy in some previous studies [8, 9, 14, 25]. The severe late gastrointestinal toxicity seen in the present study also occurred at a lower incidence than in previous studies.

The present study has some limitations. Selection bias was unavoidable because the study involved a retrospective review. In addition, the number of patients was small and the follow-up period was short because it was a single-institutional study involving only patients with stage IVA uterine cervical cancer, which generally has a poor prognosis. However, considering the fact that very few data on stage IVA cervical cancer are currently available, we believe that the information obtained from this study will be useful for daily medical practice and future prospective studies.

In conclusion, radiation therapy is safe and effective in patients with stage IVA uterine cervical cancer. Uterine cervical cancer is sufficiently curable, even at stage IVA, and aggressive treatment should be considered. However, severe adverse events, such as vesicovaginal fistula formation, are the major issues after treatment. A radiation regimen with a lower dose fraction may decrease the risk of these complications. Further investigations involving larger numbers of patients and longer follow-up periods are required to determine the optimal radiation regimen, with or without chemotherapy, for the treatment of patients with stage IVA uterine cervical cancer.

From March 1995 to August 2013, a total of 28 patients with stage IVA uterine cervical cancer received radiation therapy with curative intent at our institution. All patients had histopathologically confirmed uterine cervical carcinoma and tumor invasion into the bladder and/or rectum. Bladder and rectal invasion was ascertained by cystoscopy and colonoscopy, respectively. Clinical stage was assessed by chest X-ray and computed tomography (CT), abdominal CT, and pelvic CT and/or magnetic resonance imaging prior to radiation therapy. Of the 28 patients, 12 had pelvic lymph node metastases but none had distant metastasis. Lymph node enlargement of > 10 mm in the short axis on CT was defined as metastasis. Consequently, all patients were clinically diagnosed with stage IVA based on the TNM classification defined by the Union for International Cancer Control [31].

Patient characteristics are shown in Table 3. Informed consent was obtained from all patients before treatment. This study was approved by the institutional review board of our institution.

All 28 patients initially received external irradiation to the whole pelvis in antero-posterior opposed fields or antero-posterior and bilateral fields (box fields) with 10–15-MV X-rays. Patients received 1.8 Gy per day, 5 times per week, to a total dose of 45.0–50.4 Gy (median, 50.4 Gy) in 25–28 fractions (median, 28 fractions). Twenty of the 28 patients also received HDR intracavitary brachytherapy along with external irradiation to treat the primary cervical tumors. Total doses of 5–29 Gy (median, 22 Gy) in 1–5 once-weekly fractions (median, 4 fractions) of 3.5–6.0 Gy (median, 5 Gy) were delivered to point A using an HDR Ir-192 source [32]. Although intracavitary brachytherapy was considered for the control of primary tumors with higher doses in all patients, it was abandoned in the remaining 8 patients because of dementia, patient refusal or technical difficulties. The primary tumors in these 8 patients were treated with external irradiation alone to total doses of 50.4–59.4 Gy in 28–33 fractions, consisting of whole pelvic irradiation of 45.0–50.4 Gy and a local radiation boost of 0–14.4 Gy. The total doses administered to all 28 patients were thus 50.4–79.4 Gy (median, 68.7 Gy), and the overall treatment time was 44–72 days (median, 51 days). The biological effective dose (BED) was calculated from the total physical dose according to the linear quadratic model using α/β ratios of 10 and 3 for early and late responding tissues, respectively. The median BED10 and BED3 were 88.0 Gy (range, 59.5–105.4 Gy) and 131.0 Gy (range, 80.6–166.0 Gy), respectively [33]. The BED10 was also considered as the dose of radiation that was effective for tumor treatment, and the median dose of 88.0 Gy corresponded to 73.3 Gy (range, 49.6–87.8 Gy) in the 2 Gy per fraction-equivalent dose.

Six of the 28 patients also received concurrent chemotherapy. These patients received 1–5 courses of mainly weekly intravenous cisplatin (40 mg/m2) during radiation therapy. For the remaining 22 patients, chemotherapy was unacceptable because of renal dysfunction or old age.

Patients were examined by pelvic CT within 1 month after completion of irradiation, and underwent subsequent follow-up CT scans at 3–12-month intervals. When the irradiated tumors show no progression, they were considered locally controlled.

Actuarial survival and disease-control rates were calculated from the beginning of radiation therapy, according to the Kaplan–Meier method [35]. The log-rank test was applied to detect probable prognostic factors considered predictable among various patient and tumor factors in the univariate analyses. A P value of < 0.05 was considered statistically significant. All statistical analyses were performed using the statistical software IBM SPSS version 22 (IBM, Armonk, NY, USA).

None of the authors have any actual or potential conflicts of interest to declare.

There were no sources of support for this study.