Long non-coding RNAs (lncRNAs) have been reported to perform significant roles in cancer development and progression. Our research has found that a novel lncRNA n326322 was higher in nasopharyngeal carcinoma (NPC) cells. Moreover, the gain and loss of functional approaches revealed that the overexpression of lncRNA-n326322 promoted NPC cell proliferation and invasion, whereas the downregulation of lncRNA-n326322 suppressed cell proliferation and invasion. Further experiments demonstrated that potential mechanism may be associated with the activation of PI3K/AKT and ERK/MAPK pathways. Taken together, these results indicate that lncRNA-n326322 is associated with tumorigenesis of NPC.

Nasopharyngeal carcinoma (NPC) is a common aggressive carcinoma arising from the nasopharynx epithelium [1]. It is vastly prevalent in Southeast China and some other Asian countries [1]. Thanks to the development of radiation therapy and adjuvant chemotherapy, the average 5-year survival rate for NPC patients has been greatly improved [1–4]. However, tumor recurrence and distant metastases are still the main obstacles for patient survival [5–6]. Elucidating the molecular mechanisms of pathogenesis to find notable therapeutic strategies for NPC patients is urgently needed.

Long noncoding RNAs (lncRNAs) are a class of transcripts longer than 200 nucleotides in length with limited or no protein-coding functions [7]. Accumulating evidence indicates that dysregulated lncRNA expression levels are correlated with cancer progression and development by modulating gene expression in transcriptional or posttranscriptional levels [8–13]. For example, lncRNA urothelial cancer-associated 1 (UCA1) has been shown to overexpress in bladder cancer, and the high expression of UCA1 frequently enhanced the invasive and migratory capacity of bladder cancer cells [13]. Recent studies have also reported that lncRNA metastasis-associated lung adenocarcinoma transcript 1 (MALAT1) could promote epithelial-to-mesenchymal transition (EMT) and metastasis in many cancers, including renal cell carcinoma, oral squamous cell carcinoma, and endometrioid endometrial carcinoma [14–16]. However, only a few studies exist, focusing on dysregulated lncRNAs in NPC and their functions that remain largely unknown [17–19].

In this study, we have identified a new lncRNA-n326322 (Noncode V3 ID: n326322), which was upregulated in NPC cell lines. We also found that lncRNA-n326322 could regulate cell proliferation through PI3K/AKT pathway and promote cell invasion through ERK/MAPK pathway in NPC.

lncRNA-n326322 is upregulated and associated with tumorigenesis of NPC

The expression levels of lncRNA-n326322 in NPC cell lines were analyzed by qRT-PCR, and the results showed that lncRNA-n326322 expression was significantly higher in NPC cells than in immortalized NP69 cells (Figure 1A). To predict the potential biological functions of the novel lncRNA-n326322 in tumor formation, we employed bioinformatic analyses based on some emerging themes. One of these themes is that lncRNAs perform their regulatory functions partly through interaction with RNA-binding proteins (RBPs). Moreover, with the rapid development of high-throughput sequencing of RNAs, it has provided powerful ways to map the interaction of lncRNAs and RBPs [20, 21]. We used RBPDB (http://rbpdb.ccbr.utoronto.ca/), a database of RNA-binding specificities, to search for the possible RBPs that could be sequence complementary with lncRNA-n326322. As shown in Table 1, we found a total of 16 RBPs that could match to lncRNA-n326322, including RBMY1A1, EIF4B, and Pum2, which have been reported to have an important influence on tumor progression [22–24]. In addition, accumulating studies have demonstrated a competitive endogenous RNA (ceRNA) hypothesis stating that lncRNA might serve as a molecular sponge to modulate miRNA expression [25]. We employed database software to determine conceivable miRNAs that could bind to lncRNA-n326322 and eventually found a total of 30 paired miRNAs. Then, we performed computational methods to confirm these possible miRNA targets. Here, we integrated lncRNA-n326322, its paired miRNAs, and miRNA targets to construct a global ceRNA network (Figure 1B). To further explore this interaction network, we used the Kyoto Encyclopedia of Genes and Genomes (KEGG) pathways to analyze these targets. Interestingly, we found that these lncRNA-associated ceRNA targets are involved in some KEGG pathways including cancer pathways and some other signaling pathways (Figure 1C). Among these enriched signaling pathways, such as the MAPK and Ras signaling pathways, as well as the PI3K–Akt signaling pathway, have been identified to contribute to the tumorigenesis of NPC [26–28]. 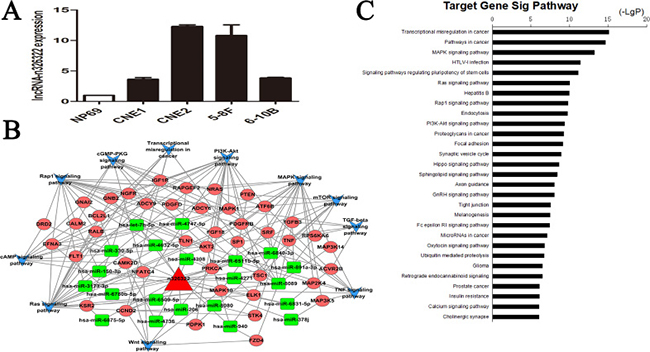 As discussed above, lncRNA-n326322 is upregulated and associated with tumorigenesis of NPC.

To investigate the effects of lncRNA-n326322 on the proliferation of NPC cells, gain and loss of functional approaches were performed. As shown in Figure 1A, NPC cell lines of CNE-2 expressed the highest levels of n326322, whereas 6-10B showed the lowest levels of n326322 among these tested NPC cell lines. Thus, we selected the CNE-2 and 6-10B cells for further studies. The expression levels of lncRNA-n326322 in 6-10B cells or CNE-2 cells were analyzed by qRT-PCR after transfection with pcDNA-n326322 or n326322-siRNA. In comparison with the negative control, the 6-10B cells transfected with n326322 overexpression vector evidently exhibited an increased n326322 mRNA level, whereas the knockdown efficiency of lncRNA-n326322 in CNE-2 cells was nearly 60%. Based on the growth curves determined by Cell Counting Kit-8 (CCK-8) assays, the forced expression of lncRNA-n326322 dramatically improved cell viability, whereas suppression of n326322 had the opposite effect in CNE-2 cells (Figure 2B). We also used colony formation assays to confirm our findings. As shown in Figure 2C, lncRNA-n326322 substantially increased the colony formation efficiency in NPC cell lines. 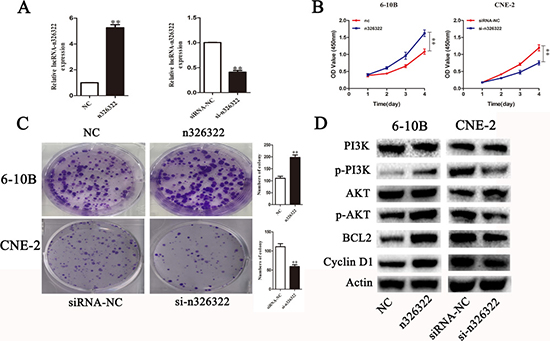 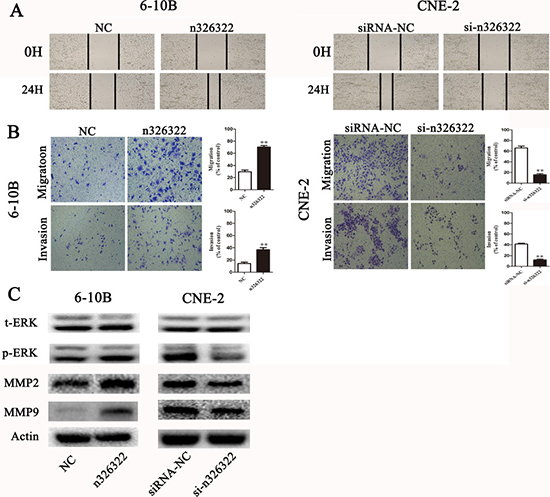 According to our bioinformatic analyses, the ERK/MAPK pathway, which was often aberrantly activated in human cancers and led to enhanced cell invasiveness [32, 33], might take part in n326322-driven tumor invasion. We performed the Western blot analysis to examine the expression levels of upregulated or downregulated lncRNA-n326322 on the ERK/MAPK signaling pathway. As shown in Figure 3C, the protein levels of phosphorylated ERK were higher in lncRNA-n326322 overexpressing cells, and the opposite result was observed in lncRNA-n326322 knock-down cells, whereas no detectable changes were found in the total levels of ERK. It is widely acknowledged that matrix metalloproteinases (MMPs) are the vital downstream signaling components of the ERK/MAPK pathway [34, 35]. Particularly, upregulations of MMP2 and MMP9 are associated with NPC tumor progression and enhance the migration and invasion of NPC cells [36]. Here, we identified that the expression levels of MMP2 and MMP9 in lncRNA-n326322 overexpressing cells were reduced and increased in lncRNA-n326322 knock-down cells compared with those in the control cells. Hence, lncRNA-n326322 might promote the invasive and migratory capacities of NPC cells through the ERK/MAPK signaling pathways.

Accumulating evidence has revealed that lncRNAs play important biological roles in human cancers, and that dysregulated lncRNAs are significantly related to the occurrence and development of tumors [37–40]. Several lncRNAs have also been identified in NPC development, indicating a poor prognosis [41–45]. In this present study, lncRNA-n326322 was overexpressed more in the NPC cell lines compared with NP69, and the bioinformatic analyses showed that lncRNA-n326322 might be associated with tumorigenesis of NPC.

lncRNA-n326322 could activate invasion and migration of NPC cells. Western blot results revealed that the elevated invasion and migration by overexpression of lncRNA-n326322 was possibly linked to the activated ERK/MAPK pathway, which has been widely confirmed in cancers [49, 50]. MMP2 and MMP9, downstream of the ERK/MAPK pathway, are popular key enzymes for invasion and migration [51]. During our study, the data showed that upregulated lncRNA-n326322 induced the expression of p-ERK, MMP2, and MMP9; on the contrary, downregulated lncRNA-n326322 reduced the expression of p-ERK, MMP2, and MMP9. Although the precise mechanisms on how lncRNA-n326322 activated the ERK/MAPK signaling pathway are still unknown, a growing number of reports have thrown light on lncRNA-mediated regulation on this pathway [52, 53]. A recent study has reported that a new lncRNA HCG11-derived oncogenic growth through interaction with the RNA-binding protein IGF2BP1, contributes in facilitating the ERK/MAPK pathway in hepatocellular carcinoma [52]. Wang et al. also found that lncRNA UCA1 could function as a molecular sponge of miR-216b and activate the FGFR1/ERK signaling pathway in hepatocellular carcinoma [53]. In this present study, the underlying mechanisms that lncRNA-n326322 facilitate the ERK/MAPK signaling pathway may be also associated with RBPs and miRNAs. Our bioinformatic analysis provided some RBPs or miRNAs, such as eIF4B and miR-150, which have been proved to interact with the ERK/MAPK pathway [46, 47, 54]. However, further studies need to be performed to confirm whether these molecules are involved in lncRNA-mediated regulation on the ERK/MAPK signaling pathway.

In summary, we identified novel lncRNA-n326322 as an important mediator of proliferation and invasion of NPC cells by PI3K/Akt and ERK/MAPK signaling pathways (Figure 4) and provided a new insight into the mechanism of invasion and metastasis of NPC.

Figure 4: lncRNA-n326322 promotes the proliferation and invasion of NPC cells.

siRNA-NC and siRNA-n326322 were synthesized by RiboBio (Guangzhou, China). The full length of n326322 was subcloned into the pcDNA3.1 plasmid, and the pcDNA3.1 empty vector was used as the control plasmid. CNE-2 and 6-10B cells were cultured in six-well plates for 24 h and transfected with siRNA-n326322 or n326322 using Lipofectamine 2000 (Invitrogen, Carlsbad, CA) according to the manufacturer’s instructions. To determine the efficiency of siRNA-n326322 or n326322, the expression of n326322 was assessed with real-time PCR.

Growth curves were determined by the CCK-8 according to the manufacturer’s instructions. After the 48 h transfection, 3 × 103 cells/well were seeded in 96-well plates with five replicate wells for each group. Cells were cultured for 1, 2, 3, or 4 days before 10 ml CCK-8 was added to the 100 μL of culture medium for each well and incubated at 37°C for 1 h according to the manufacturer’s instructions. The optical density in each well was determined at a wavelength of 450 nm by a microplate reader. The experiment was repeated three times, and the data shown are the average of these three repeated measurements.

To measure the colony-forming activity, CNE-2 and 6-10B cells were trypsinized and placed into a six-well plate (1 × 102 cells/well) after transfection and cultured for 10 days. The colonies were fixed with paraformaldehyde and stained with 0.1% crystal violet. Then, the numbers of colonies were counted under an inverted microscope. All steps were performed in triplicate.

Wound-healing assay was conducted to examine the capacity of cell migration. CNE2 and 6-10B cells were cultured in six-well plates and transfected with siRNA or n326322, and then maintained for 48 h until confluency. A wound was created by manually scratching the surface of the plates with a 200-μL pipette tube, and the floated cells were removed by washing with PBS twice. Cell migration was monitored under an optical microscope with a magnification of 100×. Each experiment was performed in triplicate.

Matrigel-coated (BD Biosciences) membrane and migration assay with no matrigel membrane were used to assess cell invasion or migration ability according to the manufacturer’s instructions. Transfected CNE-2 and 6-10B cells were cultured for 48 h. The cells were resuspended (2 × 104 cells/well) in 200 μL of serum-free media and placed in the upper compartment of a chamber (Corning, NY, USA). Meanwhile, the bottom chamber was filled with 500 μL of RPMI-1640 and 20% fetal bovine serum. The cells that migrated or invaded the lower surface of the membrane were fixed with 4% paraformaldehyde and stained with crystal violet after 24 h of incubation. Then, five random fields of cells were counted under a light microscope at a magnification of 100×. All experiments were performed three times.

All statistical analyses were conducted using Student’s t-test and one-way analysis of variance with Graphpad 5.0 and SPSS 13.0. Data were expressed as mean ± standard deviation in at least three separate experiments. P < 0.05 was considered statistically significant.