Capillary density has no value as an early biomarker of bevacizumab efficacy in metastatic colorectal cancers: a prospective clinical trial

Background: Bevacizumab is a recombinant humanized monoclonal immunoglobulin G1 antibody targeting VEGF-A. It is currently used with chemotherapy as the first- or second-line therapy in metastatic colorectal cancer. Previous studies have showed that anti-angiogenic agents decrease capillary density. We evaluated the link between decreased capillary density and the response to bevacizumab-based chemotherapy.

Materials and Methods: From 2013 to 2015, patients with metastatic colorectal cancer treated in our French cancer care center and eligible for bevacizumab with chemotherapy were enrolled in a prospective single-center study. Capillary density was assessed using capillaroscopy at Day 1, Day 15 and Day 30. Response to bevacizumab was assessed at Day90 according to CHUN criteria.

Conclusions: Capillary density measured using capillaroscopy is not a good predictor of the early response to bevacizumab-based chemotherapy. (NCT01810744).

Colorectal cancer (CRC) is the third most common cancer worldwide [1]. Approximately 25% of patients present with metastases at the initial diagnosis and almost 50% of patients with CRC will develop metastases [2]. Fluorouracil-based palliative chemotherapy has been the mainstay treatment for many years. The availability of the cytostatic drugs irinotecan and oxaliplatin has improved the prognosis of metastatic CRC (mCRC) patients. In the last decade, a new class of « anti-angiogenic » target therapies have been included in treatments for colorectal cancer and several other cancers (Breast cancer, renal clear cell carcinoma, ovarian cancer or non-small cell lung cancer) [3–8]. Neoangiogenesis results from an imbalance between pro-angiogenic factors like VEGFs (Vascular Endothelial Growth Factor) and anti-angiogenic factors. This mechanism is known to be required for tumor growth and the development of metastasis. VEGF-A, a diffusible glycoprotein produced by normal and neoplastic cells, is one of the most important regulators of physiological and pathological angiogenesis [9]. VEGF-A-dependent angiogenesis, which contributes to tumor cell proliferation, is thus a target for cancer therapy.

Several anti-angiogenic target therapies are currently used in the treatment of human cancers. Bevacizumab is a recombinant humanized monoclonal immunoglobulin G1 antibody targeting VEGF-A. It has been approved for the treatment of advanced colorectal, breast, lung, renal, and ovarian carcinomas [4–8, 10]. Adding bevacizumab to currently used chemotherapy improves outcomes in patients with mCRC. Indeed, Bevacizumab, when used in the first- and second-line treatment of mCRC, improved progression-free survival (PFS) and overall survival (OS) [7, 8, 11, 12]. In recent clinical trials, the median OS of patients with mCRC treated with chemotherapy alone was around 13 to 20 months but the median OS of patients with mCRC treated with bevacizumab combined with chemotherapy was more than 25 months [7, 8, 13]. However, to date no predictive or early biomarker of efficacy has been validated.

One of the most frequent side effects of treatment with bevacizumab is hypertension (HT). The perfusion of exogenous VEGF-A is accompanied by hypotension through the activation of endothelial NO-synthase and the production of nitric oxide [14, 15]. It was therefore suggested that the pathophysiology of hypertension induced by bevacizumab or other antiangiogenic agents may be due to neutralization of the major physiological effects of VEGF-A on endothelial cells and therefore on the vascular wall. This hypothesis implies that the inhibition of endothelial NO synthase in response to various stimuli may alter the endothelial vasculature and increase sympathetic adrenergic activity [14]. Together, such biological events should lead to capillary rarefaction. Capillaries are the smallest blood vessels in the human body with a function in the exhange of materials between blood and tissue. Capillary density is defnied as the count of perfused capillary per mm2. It has been used as an indicator of the quality of issue perfusion.

Capillaroscopy is a non-invasive, easy and safe diagnostic technique designed to evaluate small vessels of the microcirculation in the nailfold and thus evaluate capillary density. In the nailfold, terminal rows of capillaries run parallel to the skin surface and, therefore, all morphological details and the nature of the blood flow can be examined. Capillaroscopy allows the precise qualitative and quantitative evaluation of the microcirculation and is a valuable tool in the daily practice of rheumatologists [16].

To our knowledge, only two studies with 14 and 16 patients, respectively, have described a decrease in capillary density during treatment with anti-angiogenic therapy and observed a correlation between capillary density reduction and bevacizumab efficacy in various types of cancer [17, 18]. However, this observation has not been reproduced prospectively in a larger and more homogenous cohort of patients in the setting of a clinical trial.

We therefore investigated variations in capillary density in patients with mCRC treated with bevacizumab-based therapy and determined their relationship with the response to treatment, PFS and OS. 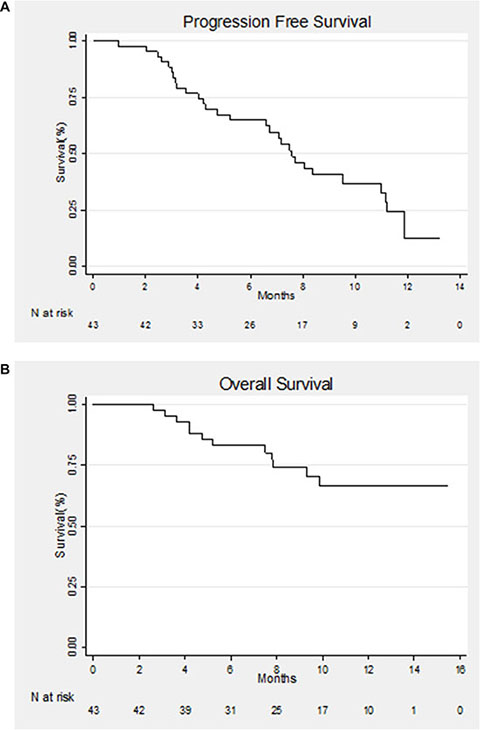 Three months after the initiation of therapy, 10 patients had progressive disease and two had died.

Capillary density was measured in 37 patients during treatment with bevacizumab. For the six remaining patients, no valid capillaroscopy assessments of capillary density could be obtained because of technical problems. During the treatment with bevacizumab, capillary density had significantly decreased on days 15 and 30. The median capillary count was 8.19 [6.00–11.00] before therapy and 4.25 [1.75–9.13] and 3.50 [1.00–8.00] after 2 weeks and 4 weeks of therapy, respectively (Table 2). All of the patients except one showed a decrease in the capillary count at day 15 and all patients at day 30 (Figure 2A–2B). 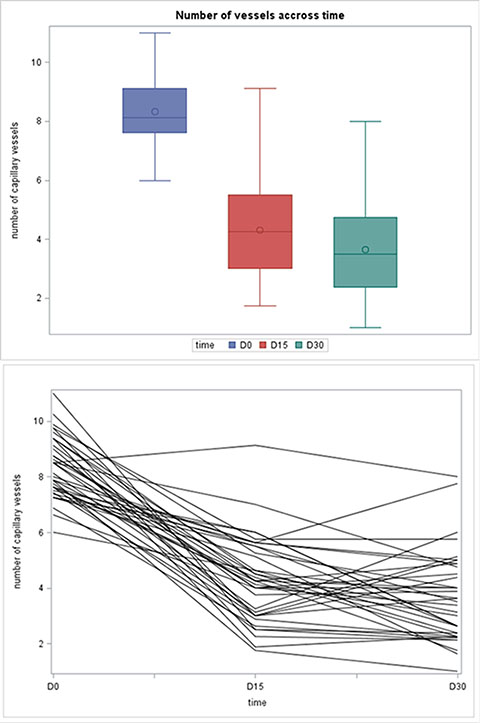 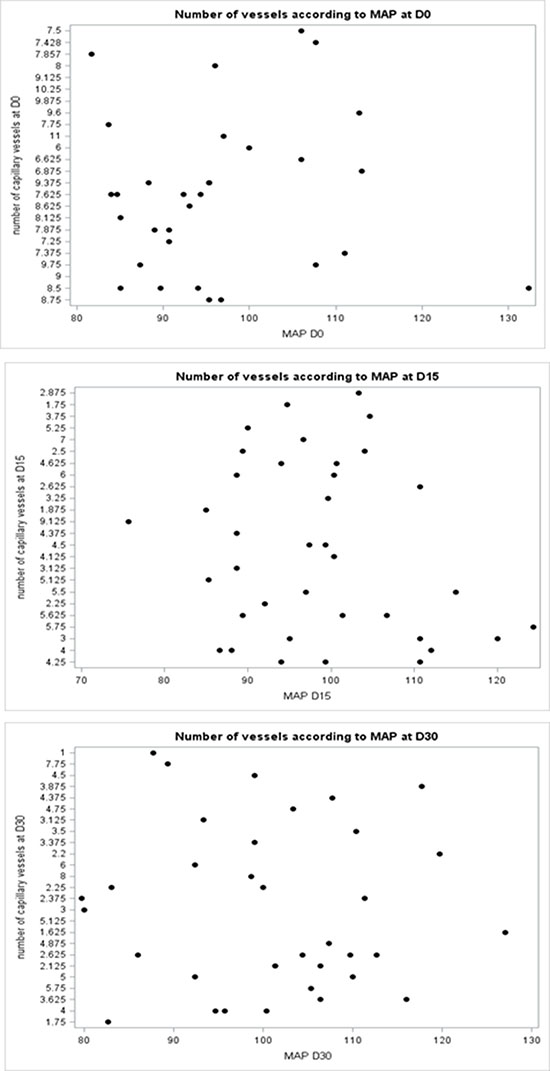 Figure 3: A scatter plot did not show correlation between capillary density and MAP at any time point (Day0, Day15 and Day30). 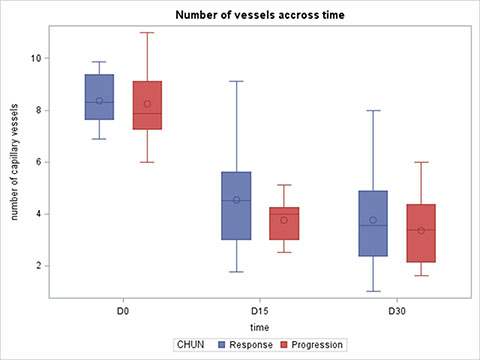 Figure 4: Capillary density at Day 0, Day 15 and Day 30 according to response to treatment. 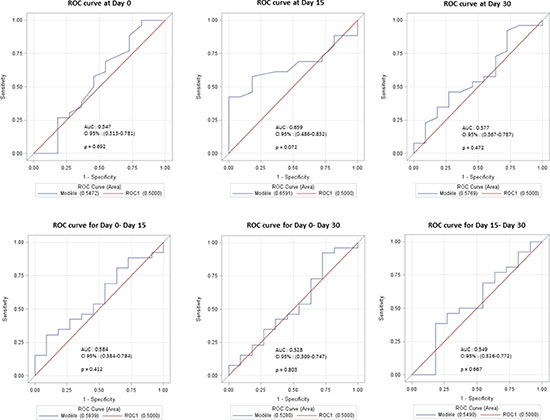 Similarly, none of these capillary density parameters could predict PFS or OS (data not shown).

Bevacizumab is one of the most frequently used target therapies associated with chemotherapy for metastatic colorectal cancer. To our knowledge, there are no biomarkers to predict its efficacy.

Previous publications reported that increased blood pressure during treatment with VEGF inhibitors has been associated with a longer time to tumor progression [21]. Surprisingly, we found no correlation between blood pressure and capillary density. Moreover, we found no association between a rapid increase in MAP and the response to therapy. We believe that these results show that increased MAP could not be considered a potential early biomarker of bevacizumab efficacy.

It should nevertheless be noted that median PFS in our population was lower than that in phase 3 trials using bevacizumab in the first line (7.6 months in our cohort versus around 10 months in a recent trial) [7, 8]. Most recent studies demonstrated poorer survival in right-side compared with left-side colon cancer [24]. The high prevalence of right-side colon cancer in our population could explain this poor survival rate and may have affected our initial statistical hypothesis. Furthermore, our patients were not treated with the same bevacizumab-based chemotherapy. We could imagine that this heterogeneity may have altered the interpretation of our results.

In conclusion, in light of the findings of this prospective study, we can say that treatment with bevacizumab results in a rapid and persistent decrease in capillary density in all patients and that this decrease is not associated with a response to bevacizumab at Day 90.

Patients with histologically confirmed metastatic colorectal cancer and eligible to receive first-line treatment with bevacizumab combined with chemotherapy were enrolled from May 2013 to July 2015 at the Georges Francois Leclerc Cancer Center in Dijon, France. Written informed consent was obtained for all patients before inclusion (NCT01810744). Bevacizumab was given at 5 mg/kg every 2 weeks or 7.5 mg/kg every 3 weeks depending on the chemotherapy regimen. Blood pressure was measured at each visit.

Tumor response was defined according to CHUN criteria [19].

In all patients, after inclusion and prior to the initiation of treatment, baseline capillary density was evaluated using capillaroscopy and blood pressure was measured.

An evaluation with a medical consultation, capillaroscopy and blood pressure was carried out during three key visits (Day 15, Day 30 and Day 90).

Tumor response to chemotherapy was evaluated by CT-Scan on day 90 using CHUN criteria. From day 90, data on treatment response, PFS and OS were reported every 3 months until 1 year.

Nail fold capillaries in the dorsal skin of the third finger were visualized by a capillary microscope. Capillary density was defined as the number of erythrocyte-perfused capillaries per mm². We used a video microscope system Cap-Xview HD (XPort Technologies).

Baseline capillary density corresponded to the number of functional capillaries. Each finger of each hand except the thumb was then observed one by one, around the entire circumference of the lunula. The capillary density was defined as the mean of the eight fingers.

The number of capillaries was counted off-line by an experienced investigator (Nicolas Falvo).

Statistical analyses were performed using SAS 9.4 software. All tests were two sided and P values were considered significant when less than 0.05.

we thank Philip Bastable for his help and its corrections.

The authors declare no funding.