Numerous methods have been recently developed to analyze tumor biological mechanisms at the function or pathway level. The pathway signatures that represent sets of gene units with consistent functional roles could display a more robust performance than gene signatures. As a major reason, the function-level analyses could reduce the dimensions of high-throughput data sets, which have more variables than sample number [9, 10]. Ooi et al. developed an approach to connecting pathways and tumor profiles, and further identified clinical relevant pathway signatures for gastric cancer [11]. Moreover, another method named FAIME was developed to generate functional signatures for tumor analyses; the FAIME calculated functional activities using rank-weighted gene expressions derived from individual sample [12]. Recently, more and more studies tried to identify dysregulated pathways in kinds of human diseases [13, 14]. However, most current methods performed the function- or pathway-level analyses only based on gene expressions, and ignored the regulatory roles of lncRNAs.

Based on pathway topology information, the subpathway concept was proposed in our previous study. In addition, it has been confirmed that key local subpathways, rather than entire pathway, were more subtly explainable to the etiology of diseases [15, 16]. Containing smaller number of components, the subpathway reflects more detailed functional descriptions and thus interprets disease biological mechanisms at a more precise level. The subpathways have been implicated in detecting multiple mechanisms, including drug action [17] and miRNA regulation [18] analyses. Recently, we identified prognostic signatures for lung cancer patients at the subpathway level and verified the subpathway signatures’ predictive power using independent data sets [19]. So, there is no doubt that subpathway-based analysis is necessary to be considered for precise tumor analyses.

Recently, we developed a novel method named subpathway-LNCE to identify dysfunctional subpathways, which were competitively regulated by lncRNAs [20]. In this study, we firstly converted signaling pathways from Kyoto Encyclopedia of Genes and Genomes (KEGG) into undirected graphs with genes as nodes, and reconstructed the pathway graphs based on lncRNA-mRNA regulations, which were identified by simultaneously considering lncRNA-mRNA co-expression relationship and shared miRNA number. Then, interesting lncRNAs and genes were mapped into the reconstructed graphs, and key subpathways were located using “lenient distance” similarity method [16]. Finally, these key subpathways were evaluated using the Wallenius approximation [21] and the significant subpathways were identified. In the result, we applied subpathway-LNCE method into multiple types of tumors and demonstrated that this method was effective to identify risk subpathways. Furthermore, we confirmed the reliability of corresponding subpathway results using independent data sets. Although the regulatory roles of lncRNAs have been applied into risk subpathway identification, the involvement of lncRNAs in inferring subpathway activities was seldom considered.

It was necessary to simultaneously consider the expression levels of genes and lncRNAs to perform the pathway analyses. In addition, the subpathway displayed advantages over entire pathway with respect to reflecting more detailed functional descriptions. To resolve these issues, we developed a framework to infer subpathway activities by integrated analysis of gene and lncRNA expressions. As shown in Supplementary Figure 1, we performed this framework at two steps as follows:

i) Reconstruct the subpathway graphs by embedding lncRNAs. We first obtained all the biological pathways from KEGG database and converted these pathways into undirected graphs with genes as nodes. Then, the gene-based subpathways were identified using our previously developed R package [16]. And we further embedded lncRNA components into the gene-based subpathways based on the lncRNA-gene regulations from the study of Shi et al. [20] (see Material and Methods). After this step, a total of 1644 subpathways were obtained, and most pathways contained less than 5 subpathways and the path: 05200 (pathways in cancer) contained 60 subpathways (see Supplementary Figure 2A). As shown in Supplementary Figure 2B, subpathways contained an average of 20.2 genes and 26.6 lncRNAs, which were smaller than the entire pathway scale. The detailed gene and lncRNA components within subpathway graphs were provided in Supplementary Table 1. 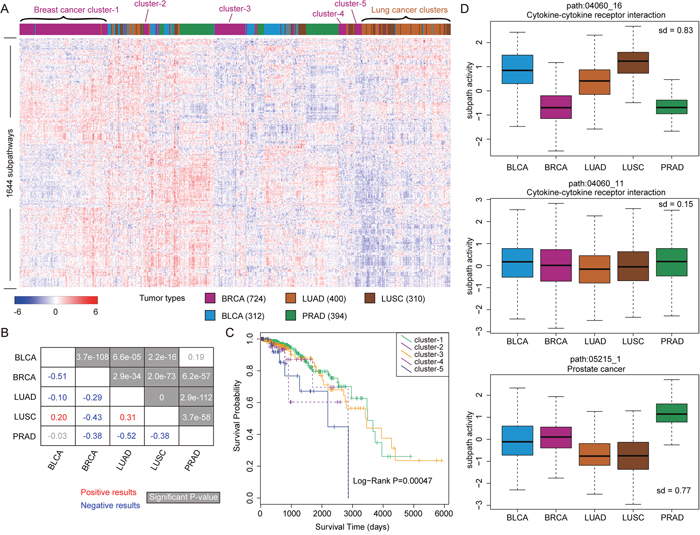 We also analyzed the activity difference of specific subpathways across five tumor types. As shown in Figure 1D, path:04060_16 from the Cytokine-cytokine receptor interaction displayed the highest activity difference. In detail, this subpathway displayed low activities in BRCA and PRAD, and displayed high activities in other three tumor types. In the meanwhile, another subpathway (path:04060_11) from the same entire pathway did not display the difference, which reflected the specificity of subpathway results. In addition, we observed that the path:05215_1 from Prostate cancer displayed significantly higher activity in PRAD than other tumor types. 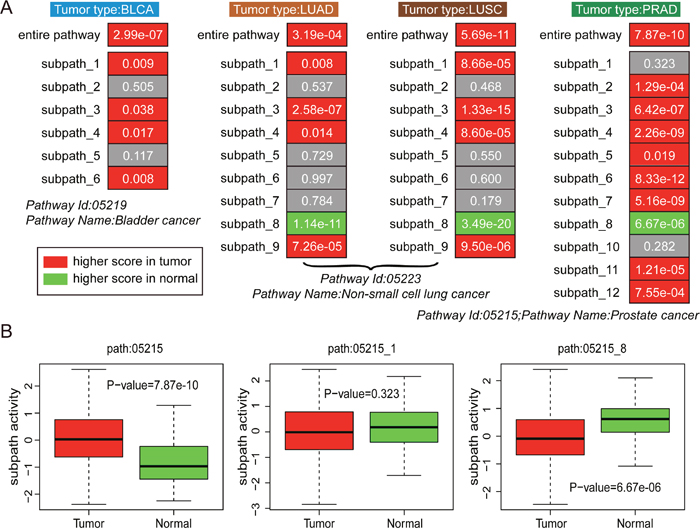 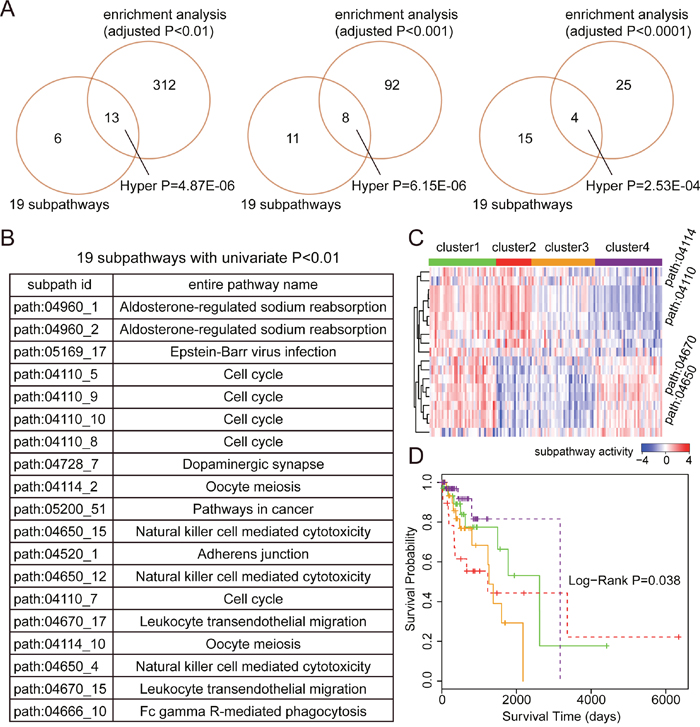 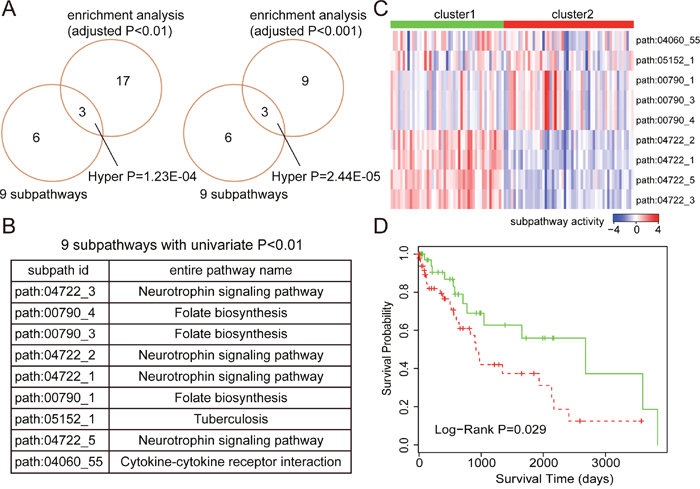 LncRNAs functioned as competitors of mRNAs by binding miRNAs, thereby competitively regulating mRNA expression levels [5, 6, 23]. The sponge features of lncRNAs could competitively regulate genes in biological pathway and thus played critical roles in tumor initiation and progression [23]. PTENP1 was a PTEN pseudogene and contained seed sequences for PTEN-targeting miRNAs [24, 25]. The study of Wang et al. found that lincRNA-RoR played roles as miRNA sponge to regulate Oct4 and Sox2, and then mediated differentiation processes [26]. Moreover, as an oncogenic lncRNA in multiple cancers, H19 functioned as miRNA sponge to lead to the de-repression of ZEB1 and ZEB2 genes in the mesenchymal cells [23]. In this study, the lncRNA-gene interactions were obtained from our previous study [20], which considered both sequence-based and expression-based associations. In the sequence-based associations, the lncRNA-gene pairs were evaluated using both hypergeometric test P-value and Jaccard Coefficient indexes. In the expression-based associations, the lncRNA-gene pairs which were co-expressed in at least 3 of 28 RNA-seq data sets were required, which were also utilized in other studies [27, 28].

The gene components of distinct signatures usually displayed no significant overlap, even though these signatures exhibited efficient power [29]. Therefore, it was necessary to perform the function-level analyses for interpreting tumor biological mechanism. In addition, concentrating more attention on subpathways rather than entire pathways might be more biologically meaningful. Recently, our team has performed a series of researches to explore the applications of subpathways, including disease etiology, drug action and miRNA regulation [17, 18, 30]. In this study, we performed a comparison between subpathway-based and entire pathway-based results. As shown in Figure 2B, subpathways exhibited more informative than entire pathways to distinguish tumor and normal samples. Different subpathways derived from the same pathway gave opposite trends in tumor and normal samples; the subpath_8 from the path: 05215 (Prostate cancer) displayed high activities in PRAD normal samples, whereas the entire pathway and other subpathways displayed high activities in PRAD tumor samples. The high-resolution subpathway activities could provide novel insights into tumor molecular mechanisms.

As an important application, we respectively identified prognostic subpathways for LUAD and LUSC based on the subpathway activities. For LUAD, the subpathways derived from Cell cycle, Oocyte meiosis, Pathways in cancer, Leukocyte transendothelial migration, and Natural killer cell mediated cytotoxicity were identified. And different activity patterns within these subpathways were observed in four LUAD clusters. The samples in cluster 2 displayed high activities for cell cycle subpathways and low activities for immune-related subpathways, whereas the samples in cluster 4 displayed opposite activity patterns with cluster 2. Also, the survival analyses showed that there was significantly difference in survival time between these clusters. For LUSC, 9 subpathways derived from Neurotrophin signaling pathway, Folate biosynthesis, and Cytokine-cytokine receptor interaction were identified, and also displayed predictive power, which indicated that these subpathways might be involved in LUSC formation and progression.

The data sets from TCGA database simultaneously detected the expression levels of genes and lncRNAs, and provided reliable resource to perform integrated analysis. Based on the subpathway activities calculated, we performed a series of applications including the characterization across tumor types, the characterization between normal and tumor samples, and tumor patient’s prognoses. This integrated strategy provided a framework for inferring subpathway activities, which could be applied on other human complicated diseases.

We obtained RNA level 3 expression data of five tumor types from The Cancer Genome Atlas (TCGA) database (version April, 2015) through the Data portal. These five tumor types included bladder urothelial carcinoma (BLCA), breast invasive carcinoma (BRCA), lung adenocarcinoma (LUAD), lung squamous carcinoma (LUSC), and prostate adenocarcinoma (PRAD). For each tumor type, we extracted the expression data sets of lncRNAs and genes from the raw read counts of each exon, which were obtained from exon quantification files (RNASeqV2). Then, we recalculated the RPKM expression values of lncRNAs and mRNAs for each sample, and the detailed calculation process was described in our previous study [31]. Both tumor and normal samples were considered in the tumor analyses. For BRCA, LUAD and LUSC types, we also obtained the clinical information for patient prognosis analyses.

The competitively lncRNA-gene regulations were obtained from our previous study in which we reconstructed lncRNA-mediated pathway graphs [20]. In brief, we firstly predicted the miRNA-lncRNA and miRNA-gene interactions based on six miRNA target prediction methods and the Argonaute-CLIP data. And, the lncRNA-gene pairs that shared large number of miRNAs using two indexes (hypergeometric P-value < 0.05 and rank of Jaccard Coefficient in top 20%) were identified as candidate lncRNA-gene regulations. Then, the co-expression relationship between candidate lncRNA-gene pairs in 28 RNA-seq data sets were further considered. The details were described in the study of Shi et al. [20]. Finally, we got 6722 non-redundant lncRNA-gene regulations including 798 lncRNAs and 1527 genes for further analyses.

We reconstructed subpathway graphs by embedding lncRNA components if lncRNAs had regulatory relationships with genes within the subpathway. The detailed processes were described below. First, we extracted all the biological pathways from KEGG database, and converted them into undirected graphs using our previously developed R package [16]. In these pathway graphs, nodes represent genes and edges between two nodes represent that these genes interacted with each other in this pathway. Then, we used K-clique method to identify subpathways based on the shortest paths among genes in each pathway. In this process, the distance between any two gene nodes within subpathway was no larger than k, and the default value (k=3) was used. Finally, we determined whether one lncRNA was embedded in the subpathway based on competitively lncRNA-gene regulations obtained from our previous study [20]. And the lncRNAs which regulated at least one gene within the subpathway were embedded into this subpathway. To reduce bias of small scale, subpathway graphs with less than two lncRNA or three genes were not considered in further analyses. And the reconstructed subpathway graphs, which incorporated both lncRNA and gene nodes, were used for calculating subpathway activities.

Where rg +ln c,s was the rank for each gene and lncRNA in the sample s, and | N | was the total number of genes and lncRNAs in the merged matrix.

For comparison, a z-type statistic was used to define normalized subPathway Activity (sPA_ norm) as follow:

For convenience, most researchers treated the gene elements within pathway graphs as independent and applied hypergeometric test to pathway analyses. For a comparison of prognostic subpathways, we also utilized hypergeometric enrichment analyses to perform subpathway identification. In detail, we used univariate Cox method to identify prognostic genes and lncRNAs (P-value < 0.05) based on TCGA training sets. Then, the significance P-value for each reconstructed subpathway graph was evaluated as follows:

In the survival analyses, we first used K-means clustering method to divide tumor samples into different risk groups. Then, Kaplan-Meier (K-M) analyses were performed to compare the survival differences of the patients in these risk groups. The significance of differences between groups was finally tested using the log-rank test. Moreover, prognostic power of subpathway signatures were also evaluated using univariate Cox analyses. In all these survival analyses, P-value < 0.05 was considered as significant.

This work was supported in part by the National Natural Science Foundation of China [Grant Nos. 31701145, and 61603116], and the Harbin Medical University Scientific Research Innovation Fund [Grant No. 2016JCZX48].