Differentiation towards adipocytes and osteoblasts

Human mesenchymal stem cells (hMSC) that were obtained from Lonza in passage 2 were cultured in mesenchymal stem cell maintenance medium, passaged once and further cultured until cells reached 80–90% density. All differentiation experiments were finished within 22 days after initial seeding. To obtain an overview on the occurrence of amplifications prior and after differentiation induction, we analyzed different time points by different techniques. Besides arrayCGH, we applied FISH and qPCR both of which allow detecting amplifications in small subpopulations of cells. FISH and qPCR were specifically used to identify gene amplification early in differentiation. An overview on the differentiation time scale and applied techniques is shown in Figure 1. 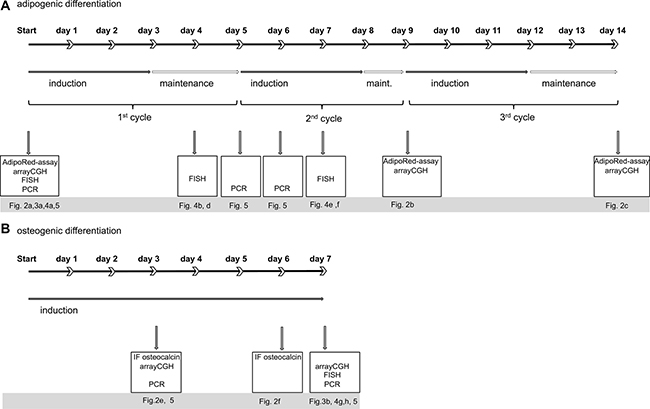 Figure 1: Overview on differentiation scheme and methodology. (A) graphical time scale is displayed for adipogenic (a) and osteogenic (B) differentiation of human mesenchymal stem cells. Each cycle of adipogenic induction is divided in culture with induction medium (closed arrow) and maintenance medium (open arrow). Boxes display experiments performed at the indicated time points and corresponding Figures. 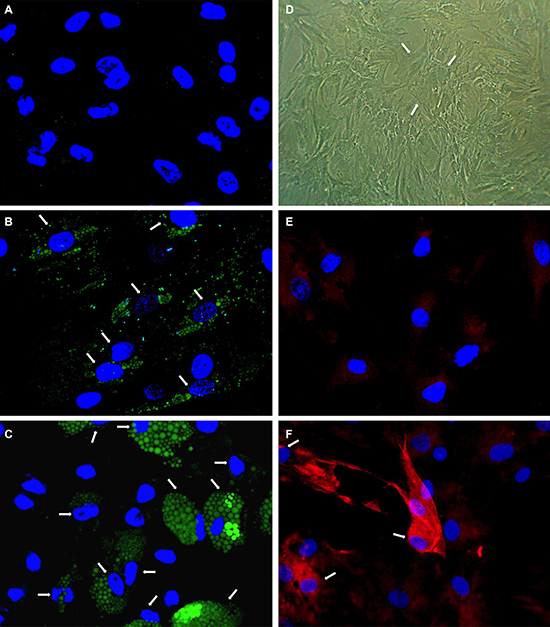 arrayCGH analysis of mesenchymal stem cells and during differentiation

DNA from mesenchymal stem cells was isolated 4 days after initial seeding and prior to first passaging and differentiation. This DNA served as control for genomic alteration that occurred during the further cell culture including cell passaging. After one cycle of adipogenic induction and maintenance there was only a small number of cells (5%) with detectable lipid vacuoles. While this amount of differentiating cells after one cycle of adipogenic induction was not sufficient for arrayCGH-based detection of gene amplification, arrayCGH analysis was possible after the completion of two cycles of adipogenic induction with subsequent cell culture maintenance i.e. after 9 days, and after the completion of three cycles of induction also followed by culture maintenance i.e. after 14 days. For osteogenic differentiation cells were grown for 3 and 7 days in osteogenic differentiation induction medium. These time points were selected to analyze amplification events early during differentiation at day three and after the detection of calcification at day seven. Later time points were not investigated due to the impact of the increasing calcification on DNA quality. 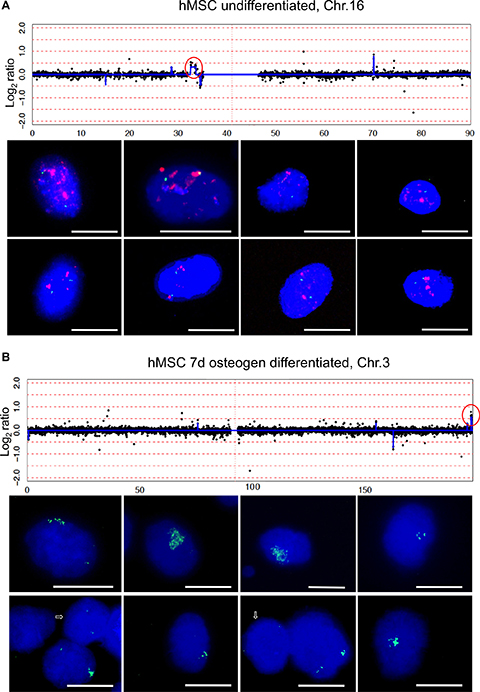 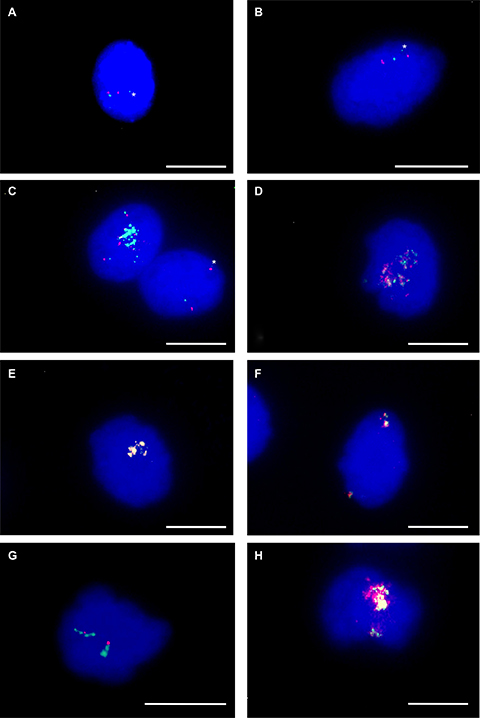 Confirmation of gene amplification with qPCR 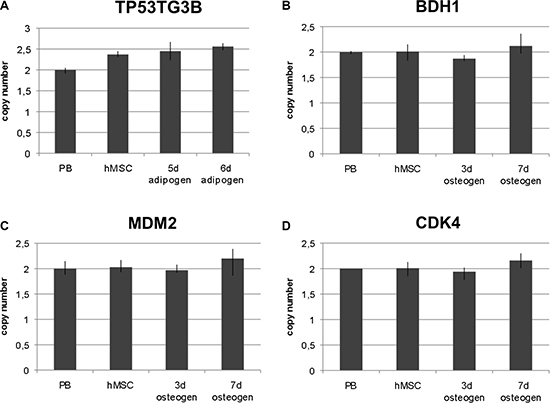 We identified gene amplifications and under-replication in human mesenchymal stem cells and during their differentiation towards adipocytes and osteoblasts. Mesenchymal stem cells are also capable to differentiate towards chondrocytes, which could, however, not by analyzed by fluorescence in situ hybridization that required one dimensional tissue cultures. To investigate gene amplifications and under-replication we employed three independent techniques to compensate for the inherent limitations of each approach. Crucial for the analysis of amplifications by arrayCGH was the data processing and threshold setting. Standard data processing and threshold setting of log2 ratio above 0.8 for amplification and below –0.8 for deletion is suitable for homogeneous cell population and homogeneous tumor tissue but not for heterogeneous cell populations [10]. We applied a segmentation step and a low threshold for sensitive detection of gene amplifications and under-replications in heterogeneous cell populations. For example in hMSCs adipogenic differentiation induction led to 5% of cells with lipid vacuoles after one cycle of induction and to 10–20% of cells with lipid vacuoles after two cycles of induction. ArrayCGH was able to detect 14 amplified chromosome regions and 15 under-replicated chromosome regions after 2 cycles of induction. Both qPCR analysis and fluorescence in situ hybridization confirmed the arrayCGH results. However, amplifications found by single gene analysis were not necessarily identified by arrayCGH. For example, arrayCGH did not detect the copy number change on chromosome 12q14.1 and 12q15. These chromosome bands harbor the genes CDK4 and MDM2 that are amplified during adipogenic and osteogenic differentiation as revealed by FISH. In conclusion arrayCGH can discover amplified chromosome regions but does not necessarily identify short amplified sequences, which can be visualized by FISH. FISH is in turn not primarily suited to display the extension of amplified chromosome region. To compensate for the limitation of these techniques, we applied both arrayCGH and techniques suited for single gene analysis including FISH and qPCR.

Although gene amplification is known to occur during D.melanogaster development, human gene amplification was for decades primarily linked to tumor development and to multi-drug resistance. Recent studies show that amplification can have a physiological function during normal mammalian differentiation and it appears intriguing to hypothesis that the frequent amplifications in human tumor cells are adopted as mechanism from normal cells.

Human mesenchymal stem cells (hMSC) were obtained from Lonza (Walkersville Inc. USA) as primary cells frozen in passage 2 (P2). MSC from Lonza express CD29, CD44, CD105, CD166, CD90 and CD73 but do not express CD14, CD34 and CD45 and this is according to marker expression previously reported for bone marrow derived mesenchymal stem cells [14, 15]. Cells were passaged once, used in P3 for all experiments with a maximum culture time of 22 days from initial seeding to three complete cycles of adipogenic differentiation induction. HMSC were cultured until they become near confluent. Adipogenic differentiation was induced by 3 cycles of induction and maintenance. Each cycle consists of feeding with adipogenic induction medium for 3 days followed by culture in adipogenic maintenance medium for 1–2 days. Osteogenesis induction (osteogenic differentiation) was induced by osteogenesis medium for 7 days. Culture and media were according to Lonza instructions for use of PoieticsTM human mesenchymal stem cells.

HMSCs were cultivated on glass coverslips. Subsequently, cells were differentiation induced as described above. Osteogenic differentiation induced cells were methanol fixed and treated with 0,2% Tween-20 for 2 minutes. Coverslips were blocked with goat serum and incubated for 1 h with mouse antibody monoclonal to Osteocalcin (ab13418, Abcam). Detection was done with an Alexa-594 coupled secondary antibody against mouse.

BAC clones were taken from the RP-11 (http://www.chori.org/bacpac/) libraries of the Welcome Trust Sanger Institute and available from SourceBioSciences, Germany [16]. BAC-DNA (1 μg) was either labeled with alexa 488-dUTP, with alexa 555-dUTP or with alexa 594-dUTP using the FISHTag DNA labeling Kit according to the manufacturer’s instructions. Differentially labeled probe DNAs were precipitated in the presence of human Cot-1 DNA. Samples were resuspended in hybridization mix (50% formamide, 20×SSPE, 20% dextrane sulfate and 27% SDS).

The analysis of the arrays was performed using R (https://www.R-project.org/. R version 3.2.3.), a language for statistical computing. The arrays were read in using “read.maimages” from the R Bioconductor package limma version 3.26.5 [17]. Positional information was added by a modified version of the method “readPositionalInfo” from the R Bioconductor package snapCGH (version 1.40.0) to be able to parse mitochondrial chromosome ID and to add a column “Position” containing the same information as the probe start column needed for further analysis steps. Since Cy3 was used as the reference the design attribute of the read in data was set appropriately. Background correction was performed applying function “backgroundCorrect” (package limma) with method “minimum”. The arrays were first normalized separately using “printtiploess” from “normalizeWithinArrays” and then quantile normalized using “normalizeBetweenArrays” (package limma). As next, the normalized data of chromosomes 1 to 22 was further processed using “processCGH” (package snapCGH). In order to minimize noise, for each chromosome the probes were assigned to intervals of 25kb and their value set to the interval mean. The segmentation was done using “runDNAcopy” from the packages snapCGH and DNAcopy (version 1.44.0) with alpha set to 0.01 and smooth region to 10 and merging was performed using “mergeStates” from (package snapCGH) with merge type set to 2 and default parameters. Finally, for each array a state table was created: The probes were divided into intervals based on the chromosome and the merged segmentation state and their start and end positions, and the predicted and average observed values were saved.