Invasive micropapillary carcinoma (IMPC) is a tumor with a propensity for metastasis that occurs in various organs [1–3]. It was first reported in the breast by Fisher et al. [4] in 1980, and the term was adopted by the World Health Organization (WHO) classification of breast tumors in 2003 [5]. We have previously shown that breast IMPC exhibits polarity reversal in cell clusters, which increases the risk of invasion and metastasis [6]. Polarity reversal can be identified by immunohistochemistry (IHC) for E-cadherin (E-cad), epithelial membrane antigen (EMA), mucin family protein-1 (MUC-1), and sialyl-Lewis X (SleX) [7–10]. Liu et al. [11] reported that presence of IMPC in breast mucinous carcinoma promotes tumor metastasis and that patients with mixed IMPC/mucinous carcinoma have worse recurrence-free survival and overall survival (OS) than patients with pure mucinous carcinoma. We theorized that polarity reversal of tumor cell clusters contributes to invasion and metastasis of IMPC and thus to its poor prognosis [12].

Rac is a member of the Rho family of small GTPases that is regulated by integrin and affects a variety of actin-dependent processes including cell-cell adhesion, cell migration, and cellular transformation [21]. Studies have demonstrated that Rac1 induces epithelial polarity in cells adhering to extracellular matrix [22] and contributes to cell migration, loss of adhesion, invasion, and metastasis of tumors [23]. However, its expression and regulatory relationship with β1 integrin in IMPC have not been reported.

Here, we examined β1 integrin and Rac1 expression and assessed their effects on polarity at the cytologic level. We then validated our results in breast cancer cell lines and primary breast cancer cells. We further correlated our findings with patients’ clinical outcomes. 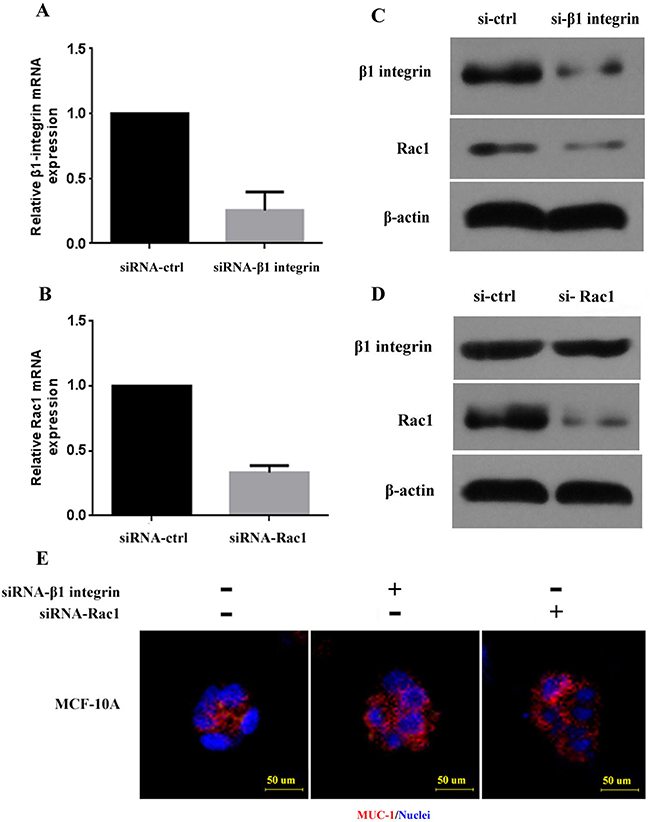 To assess polarity changes induced by β1 integrin, we planted MCF-10A cells in collagen gel for three-dimensional (3D) culture and then silenced β1 integrin expression using siRNA. MUC-1, the marker of cell polarity, was detected by rhodamine-conjugated affinipure goat anti-rabbit IgG (red). Immunofluorescence analysis of the siRNA-ctrl control group showed that MUC-1 was expressed on the inner side of the cell clusters, indicating that MCF-10A cell clusters displayed normal polarity. As shown in Figure 1E, after treatment with siRNA-β1 integrin, MUC-1 staining was predominantly located on the stroma-facing surface of the cell clusters, demonstrating polarity reversal. The cell clusters were transformed from having a hollow growth pattern to irregular clusters. When cells were treated with siRNA-Rac1, cell cluster polarity also became disordered (Figure 1E). These observations indicate that loss of β1 integrin and/or Rac1 can lead to disordered cell polarity in 3D culture. 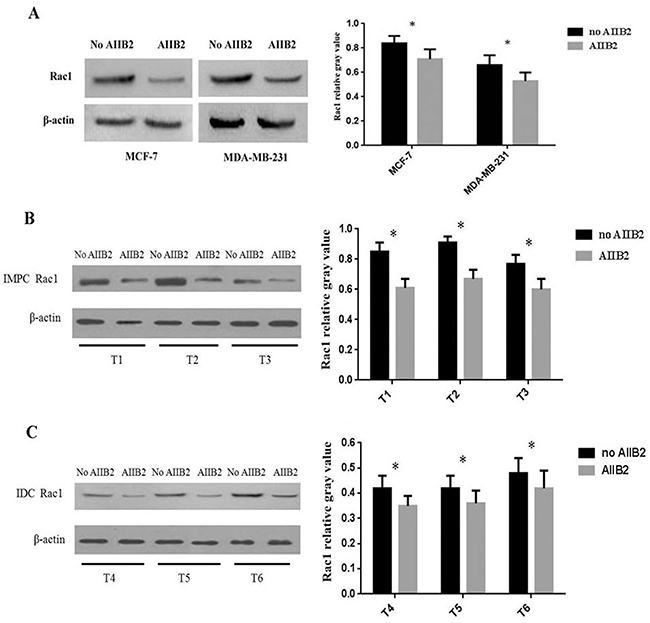 Figure 2: Expression of β1 integrin and Rac1 in breast cancer cell lines and primary tumor cells at 3D culture treated with β1 integrin inhibitor AIIB2 and detected by Western blot. (A) Rac1 expression in MCF-7 and MDA-MB-231 was lower than in controls. (B, C) Rac1 expression in IMPC and IDC-NST tumor cells was decreased. β-Actin was used as control. Relative gray value was defined as the ratio between the gray value of Rac1 and β-actin (student’s t-test, *P < 0.05). T1-T3: 3 cases of IMPC primary tumor; T4-T6: 3 cases of IDC-NST primary tumor. 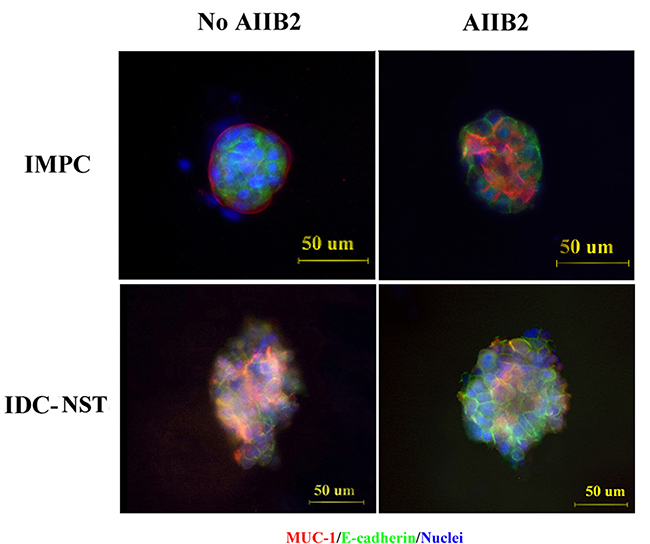 β1 integrin and Rac1 are overexpressed in IMPC 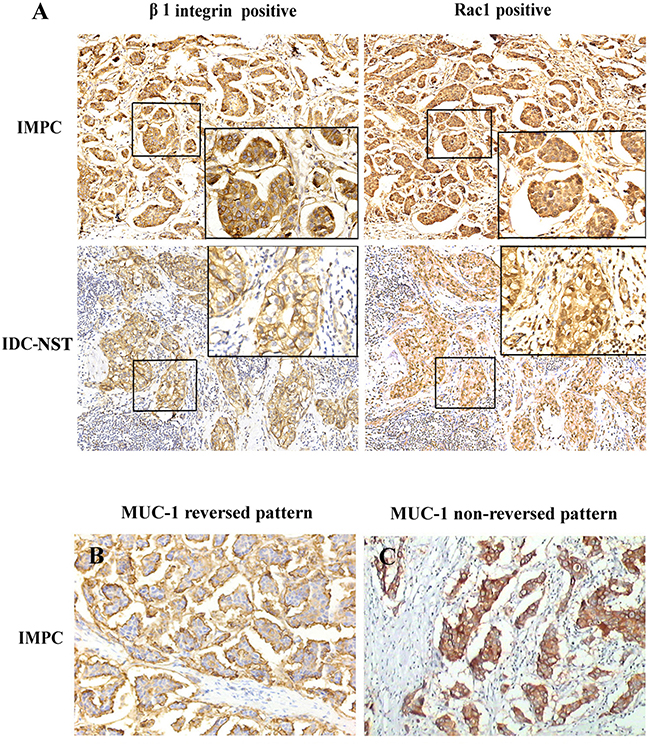 *P values were calculated by Mann-Whitney U test.

Table 3: Lymph node metastasis of IMPC and IDC-NST with low or high expression of β1 integrin and Rac1 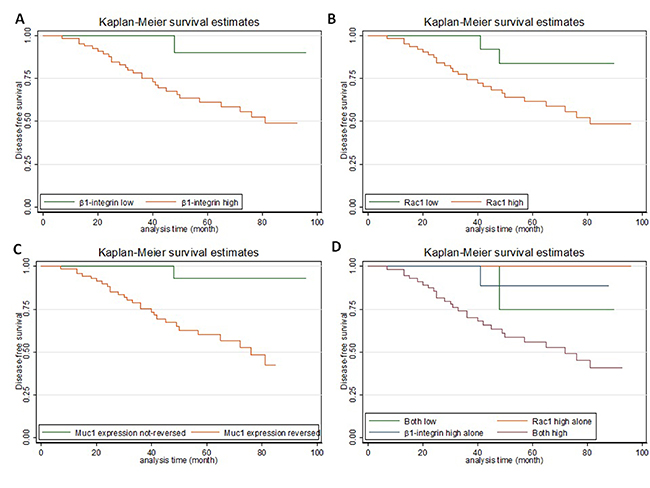 Pure breast IMPC is rare, constituting <2% of breast cancers; however, IMPC has a high rate of metastasis. Currently, there are no universally accepted criteria for pathologic diagnosis of IMPC, particularly regarding the required proportion of micropapillary clusters in a nonhomogeneous tumor. In this study, we selected tumors consisting of at least 50% IMPC component. Based on previous studies, we hypothesized that tumor cell polarity reversal is a critical factor facilitating metastasis. The integrins constitute a family of polarity-related proteins, and their upregulation in breast cancer cells has been reported [27], although conflicting results have also been described [28]. We chose to study the expression of β1 integrin and Rac1 in breast cancer cell lines and IMPC and correlated our findings with the clinicopathologic features of patients. To our knowledge, this is the first study to investigate the role of β1 integrin and Rac1 expression in IMPC.

Using 3D culture, we demonstrated that the polarity of MCF-10A clusters became disordered after treatment with siRNA-β1 integrin; the cell clusters were transformed from normal clusters with a hollow growth pattern to irregular cell clusters, as reported previously by others [19, 20]. Weaver et al. [17] reported that treatment of breast cancer cells with inhibitory β1 integrin antibody leads to a striking morphologic and functional reversion to a normal phenotype. We confirmed these results in our study, in which treatment with the β1 integrin inhibitor AIIB2 partially abrogated the polarity reversal seen in IMPC clusters. These results indicate that upregulation of β1 integrin causes polarity reversal of IMPC cells, followed by formation of tumor cell clusters as a result of upregulation of Rac1. This could explain how morula-like clusters of IMPC are formed and could support our previous findings that IMPC tumor cells divorce from primary tumor and then invade and metastasize through tumor cell clusters [12].

Formalin-fixed, paraffin-embedded tissue blocks from 102 patients with breast IMPC collected from 2007 to 2008 were retrieved from the archive of the Department of Breast Cancer Pathology and Research Laboratory, Tianjin Medical University Cancer Hospital, Tianjin, China. All cases had an IMPC component constituting >50% of the tumor volume. Paraneoplastic benign breast tissue was available in 48 blocks. In addition, 100 random cases of IDC-NST were retrieved during the same period as the control group. The diagnosis was confirmed independently by two pathologists using World Health Organization (WHO) criteria [30]. None of the patients received preoperative radiation or chemotherapy. Patients were followed for 1 to 100 months, with a median follow-up time of 63 months. Fresh tumor tissue samples were obtained from five IMPC and five IDC-NST patients who underwent surgical resection from November 2015 to May 2016. The research protocol was approved by the Tianjin Medical University Institutional Review Board, and informed consent was obtained from all participants.

In breast cancer primary culture, after removal of adipose tissue, tumor tissue was treated as previously described [31]. Cells cultured in flask were then digested and centrifuged. Collagen gel was prepared on ice for 3D cell culture. The cells were counted and embedded in collagen gel with a cell density of 1.5 × 105/mL. The collagen gel was then planted in a 24-well plate. After incubation at 37°C for 1 hour, complete medium was added and changed in 3-day intervals. After incubation for 3 to 7 days, spheroids of various sizes were harvested. For the inhibitor assessment, AIIB2 (7.5 μg/mL) was added on the day of planting, and the medium was replaced with a new one containing fresh inhibitor every 3 days. Control cultures were treated with ordinary medium only.

Cells were treated with siRNA and Lipofectamine 2000. After 6 hours of incubation, transfection medium was replaced with complete culture medium for 48 hours. To verify the siRNA efficacy, cells were lysed and β1 integrin and Rac1 expression was analyzed by real-time polymerase chain reaction (PCR) and Western blot.

Three-dimensional cultured collagen gel was digested by type I collagenase and centrifuged before protein extraction. Total protein extracts from 3D cell cultures were prepared as described previously [24]. The protein concentration of each lysate was measured using the BCA method (Beyotime, China). Twenty micrograms of protein from each sample were separated by 10% SDS-polyacrylamide gel electrophoresis and transferred to PVDF membranes (Millipore, Billerica, MA) for 2 hours. The membranes were blocked with 5% skim milk for 1 hour. After overnight incubation with primary antibody β1 integrin (1:5000) and Rac1 (1:5000), membranes were incubated with secondary antibodies for 1 hour, and proteins were detected using the LiCor Odyssey Infrared Imaging System. Anti-β-actin antibodies were used as internal control.

Primary tumor cells in 3D culture were fixed with 4% paraformaldehyde for 20 minutes and washed three times with phosphate-buffered saline (PBS); then 0.25% Triton X-100 (PBS prepared) was added for 20 minutes. The collagen gel was blocked with 3% BSA for 40 minutes. The cells were then washed with PBS and incubated with primary antibodies E-cad (1:50) or MUC-1 (1:200) overnight at 4°C in a dark wet chamber, followed by incubation with secondary antibodies (ZF-0316/ZF-0312; Zhongshan Golden Bridge, China) for 2 hours at room temperature. After washing with PBS, the nuclei were counterstained with DAPI (blue). Immunofluorescent images were captured by the Olympus IX51 (Olympus, Tokyo, Japan) confocal microscope. Experiments were repeated a minimum of three times.

Tumor size was measured as the largest dimension grossly or microscopically. Lymph node status was obtained from pathologic report. The tumor grade and tumor-node-metastasis (TNM) stage were assigned according to the standard WHO classification [30]. IHC for ER, PR, and HER2 was re-evaluated at review of each case. Tumors with staining in >1% of tumor cell nuclei were defined as positive for ER and PR [32]. HER2 immunostaining was evaluated per the Dako HercepTest scoring system.

Statistical analysis was carried out using SPSS 19.0. Differences among groups were analyzed using the Mann-Whitney U test. Correlations between two variables were evaluated using Spearman’s rank correlation analysis. Survival curves for DFS and OS were constructed using the Kaplan-Meier method, and the differences between two groups were assessed using the log-rank test. Cox proportional hazards models were used to perform univariate and multivariable analysis. A two-tailed P < 0.05 was considered statistically significant.