Diagnostic accuracy of DNA methylation in detection of gastric cancer: a meta-analysis

Gastric cancer is a common cancer worldwide and is associated with high morbidity and mortality. Approximately 984,000 incident cases of gastric cancer and 841,000 attributable deaths were estimated globally in 2013, which ranks fifth in cancer incidence and second in cancer-related deaths [1]. Although the incidence of gastric cancer has decreased in recent years, lack or non-specific symptoms among patients with early stage cancer prevents early detection and treatment in the majority of the patients [2]. Although accurate for detecting early gastric cancer, the cost and invasiveness of endoscopy as a primary screening test has been limited in large-scale screening programs [3].

In order to improve the detection of early gastric cancer, non-invasive blood biomarkers have received great interest. Although biomarkers such as carcinoembryonic antigen (CEA), carbohydrate antigen-19-9 (CA 19-9), and carbohydrate antigen-72-4 (CA 72-4) have been evaluated for diagnosis and surveillance of gastric cancer, the low sensitivity of these biomarkers do not warrant their routine use in clinical settings [4–6]. Emerging studies have highlighted that carcinogenesis of gastric cancer involves multiple processes that includes epigenetic as well as genetic alterations. Specifically, DNA methylation can lead to inactivation or activation of cancer-related gene [7, 8]. Furthermore, methylation of the promoter region can silence tumor suppressor genes that play an important role in regulating DNA repair, cell adhesion, cell-cycle regulation, signal transduction, and apoptosis [9, 10]. Modification in DNA methylation (e.g. Reprimo, hMLH1) frequently detected in gastric cancer tissues as well as in serum or plasma specimens in patients with gastric cancer, while seldom or absent in controls, suggests its potential application as a non-invasive biomarker [11, 12]. More importantly, several studies have demonstrated the presence of gene methylation in intraepithelial neoplasia further supporting the role of DNA methylation as an early event in the carcinogenesis of gastric cancer [13, 14].

Previous studies evaluating DNA methylation to differentiate patients with or without gastric cancer are limited by small sample size or inconsistent results. Therefore, we performed a meta-analysis to assess the diagnostic accuracy of DNA methylation markers as a non-invasive biomarker in detecting gastric cancer.

After a thorough literature search, we identified 197 records from Pubmed, two from Cochrane, 204 from Web of Science, and 211 from Embase. Of the 614 studies, 556 were excluded after reviewing the title and abstract for the following reasons: duplicate studies in 174, unrelated to study aim in 321, review papers in 43, meeting abstracts in 14, editorials in two, letter to the editor in one, and a book chapter in one. When 14 meeting abstracts were reviewed in detail, two were published in full-text and the data had been included in the analysis. However, the remaining 12 meeting abstracts were confirmed to not meet the study criteria (unrelated study in six, insufficient data to calculate study outcome in four, insufficient data to assess bias in two). Additional 26 studies were excluded after reviewing the full text (insufficient data for calculating specificity in 10, non-blood based testing in nine, prognostic study of patients with gastric cancer in five, and non-English manuscript in two). Finally, 32 studies that include 69 analyses of blood DNA methylation tests for evaluation of gastric cancer were included in the meta-analysis. The flow chart of the search method is shown (Figure 1). 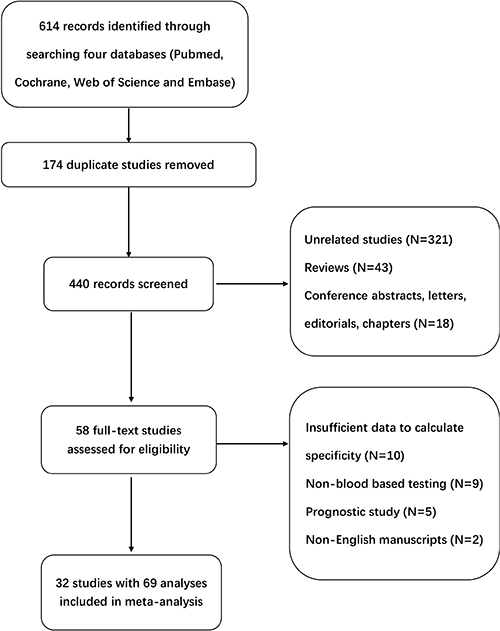 Figure 1: Flow diagram of studies identified in the meta-analysis.

The characteristics of the 32 publications including 69 analyses that compared frequency of DNA methylation markers between gastric cancer and control patients are shown in Table 1. Of the 32 included studies, nineteen evaluated methylation status of one gene, five evaluated two genes, and eight evaluated three or more genes. A total of 39 genes methylation were analyzed in these studies. P16 was reported in seven studies. E-cadherin and RASSF1A were reported in four studies. Finally, DAPK, APC, hMLH1, SFRP2, RUNX3, Reprimo, and RNF180 were reported in two studies.

These studies were conducted in nine countries (China, Japan, Thailand, Chile, Iran, Greece, South Korea, India, Singapore) and were published between 2002 and 2016. Of the 32 studies, 13 studies reported age and 15 studies reported gender data only among patients with gastric cancer while none of the studies provided age and gender data on control patients. Methylation-specific polymerase chain reaction was used in 31 studies to detect DNA methylation in the serum or plasma samples. In addition, 27 studies qualitatively analyzed the frequency of methylation.

Forest plot of individual and pooled sensitivities and specificities of all DNA methylation markers for diagnosing patients with gastric cancer are shown in Figure 2. The pooled sensitivity and specificity for detecting gastric cancer by the presence of one or more DNA methylation genes were 57% (95% CI 50–63%) and 97% (95% CI 95–98%), respectively. In addition, the pooled +LR (positive likelihood ratio) and -LR (negative likelihood ratio) were 19.1 (95% CI 11.0–33.0) and 0.45 (95% CI 0.38–0.52), respectively. The DOR (diagnostic odds ratio) was 42 (95% CI 24–74). The I2 values for sensitivity and specificity were 93.1% and 90.3%, respectively, implying significant heterogeneity between studies. Thus, the random effects model was used to pool the values. In addition, the SROC (summary receiver operating characteristic) curve for the included studies is presented in Figure 3. The AUC (area under the curve) was 0.88 (95%CI 0.85–0.91). 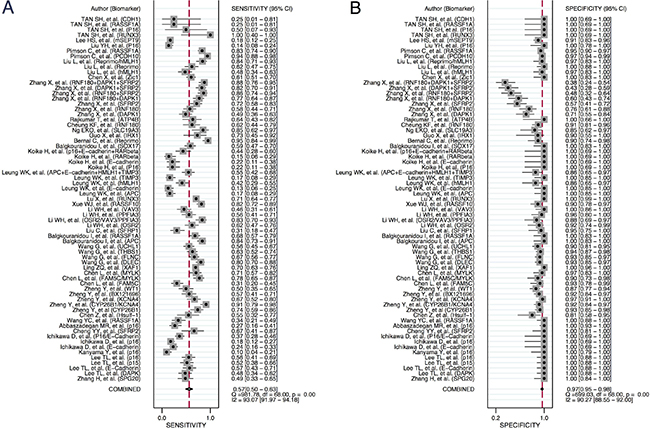 Figure 2: Forest plot of individual study and pooled sensitivities (A) and specificities (B) of blood DNA methylation marker for detection of gastric cancer. 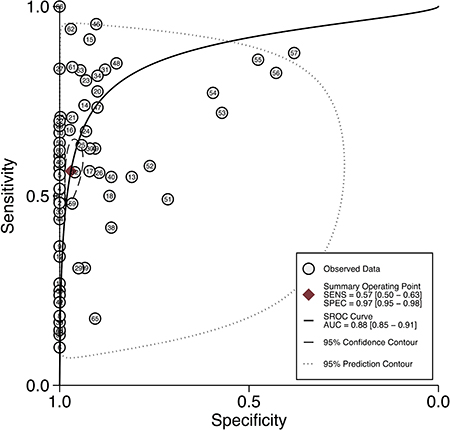 Table 2: Pooled sensitivities and specificities of evaluation of DNA methylation by subgroups

A meta-regression was conducted to assess potential sources of heterogeneity between studies by using following parameters (Figure 4): numbers of patients with gastric cancer and non-gastric cancer, DNA methylation markers profiling (single vs. multiple), test sample type (serum vs. plasma), and geographic regions (Asia vs. other regions). DNA methylation markers profiling (P < 0.01) and region of the study origination (P < 0.05) had an effect on sensitivity, and test sample type (P < 0.001) had an effect on specificity. 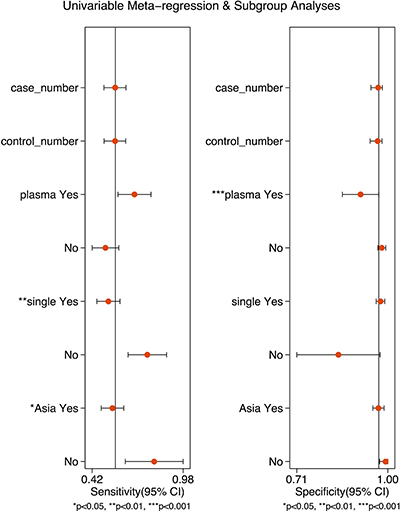 Figure 4: Forest plots of multivariable meta-regression and subgroup analysis for sensitivity and specificity.

The quality assessment showed presence of high or unclear risk of bias for patient selection given that all the studies were case-control study design (Figure 5). 10 studies did not clarify whether the index test was interpreted prior to the knowledge of the reference standard. All studies showed low risk of bias in the categories of reference standard and flow & timing domains. In addition, publication bias was detected by Deeks’ funnel plot asymmetry test (P < 0.05). However, the subgroup analyses of plasma testing (P = 0.41) and multiple DNA methylation markers (P = 0.91) did not demonstrate publication bias (Figure 6). 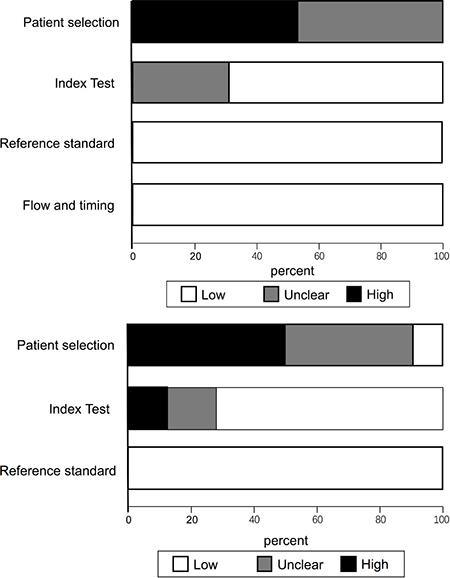 DNA methylation refers to the addition of a methyl-group to the carbon 5’ position of the cytosine ring of CpG dinucleotides to form 5-methylcytosine. CpG dinucleotides are concentrated in the upstream promoter region of many genes [15]. Aberrant methylation of the promoter region involved in the inactivation of tumor suppressor gene plays an important role in the tumorigenesis of multiple cancers (head and neck cancer, colon cancer, bladder cancer) and appears to be promising biomarkers for cancer detection [16–19]. Emerging studies have also shown that tumor suppressor genes (e.g. RNF180, Zic1) are frequently methylated, not only in gastric cancer, but also among patients with pre-malignant gastric lesions. Therefore, dysregulation in CpG-island methylation is likely to be involved in the early stages of gastric carcinogenesis, and DNA methylation may be utilized to detect early stage gastric cancer.

The majority of the studies represented in our meta-analysis utilized methylation-specific PCR (MSP) to determine the methylation status of blood specimens. Although MSP is low-cost, which is an important factor for an optimal screening test, evaluation of only one or two CpG sites is possible which may impact the sensitivity. Although bisulfite sequencing that evaluates methylation status of each CpG locus has superior precision and is considered the gold standard, the application in clinical practice is currently limited by complexity and high-cost. However, improvement in the evaluation of DNA methylation technique in the future may increase generalizability as a screening test for gastric cancer [24, 25].

Our meta-analysis has limitations. First, all the studies evaluating DNA methylation status as a diagnostic test for gastric cancer included in the meta-analysis were case-control studies, rather than cohort studies, which have a higher risk of bias. Second, substantial publication bias was detected by Deeks’ funnel plot asymmetry test in the primary analysis. However, the subgroup analyses of plasma-based testing and evaluating multiple DNA methylation markers did not demonstrate evidence of publication bias supporting validity. Subgroup analyses results further suggested that the mode of testing, stage of patients, DNA methylation markers profiles, and the region of study may explain for the study heterogeneity, which was additionally confirmed by our meta-regression analysis. Third, a small number of patients from regions other than Asia and those with methylation in the promoter of multiple genes included in the meta-analysis may affect the generalizability of our findings. Our results should be interpreted with caution and will require validation in future population based-studies that encompass patients screening for gastric cancer.

A comprehensive literature search using Pubmed, Cochrane, Web of science, and Embase for relevant articles to November 20, 2016 was conducted to identify studies assessing diagnostic accuracy of DNA methylation utilizing plasma or serum in patients with gastric cancer. The following search strategies were used: (((((“Stomach Neoplasms” [Mesh]) OR (“gastric neoplasm*” OR “gastric cancer” OR “gastric tumor” OR “gastric carcinoma” OR “gastric oncology*” OR “stomach neoplasm*” OR “stomach cancer” OR “stomach tumor” OR “stomach carcinoma” OR “stomach oncology*”))) AND ((“DNA Methylation”[Mesh]) OR (methylation*))) AND ((“Diagnosis”[Mesh]) OR (test* OR discover* OR find* OR detect* OR diagnosis* OR screen* OR biomarker OR marker))) AND (blood OR plasma OR serum OR sera). The references of relevant publications were also thoroughly searched for additional studies.

Data including name of the lead author, publication year, country of study origination, types of samples examined, analyzed genes, experimental methods, sample size, and frequency of DNA methylated status in cases and controls were extracted from the selected study.

STATA 12.0 was used to perform the meta-analysis. Sensitivity, specificity, +LR, -LR, and DOR with corresponding 95% CI were calculated using a random effects model due to significant heterogeneity. A SROC curve was plotted based on each analysis, and the AUC was used to evaluate the overall diagnostic test accuracy. Furthermore, the I2 value was used to evaluate heterogeneity between studies. In addition, meta-regression and subgroup analysis were performed to identify the potential sources of heterogeneity. Presence of publication bias was evaluated by the Deeks’ funnel plot analysis.

HWL, SJM and ZWF had the concept for the systematic review; HWL, ZWF and LQF designed and conducted the search strategy to identify included studies; ZWF, CH and CSJ conducted data extraction; ZWF and WJG conducted statistical analysis; HWL, ZWF and JJK wrote the first draft of the manuscript; All authors edited and critically revised the final version of the manuscript.

We would like to thank Yunxian Yu for assistance with statistics.