Materials and Methods: From 2004 to 2014, data for prostate cancer patients categorized as N1M0 after RP were retrieved from the Surveillance, Epidemiology, and End Results (SEER) database. After propensity-score matching, the 10-year cancer-specific survival (CSS) rates between patients who received ART (ART group) or did not/unknown (no-ART group) were compared for each stratum of lymph node ratio (LNR) (%) according to the number of involved LNs.

In 2017, prostate cancer accounted for 1 in 5 new cancer diagnoses and was the third leading cause of cancer death in men within the United States [1]. Even though most patients who undergo radical prostatectomy (RP) are cured of the disease, the 10-year progression-free survival rate decreases by 20–64% in patients with lymph node (LN) metastases [2–4]. Prostate-specific antigen (PSA) and Gleason scores have been identified as independent prognostic factors in prostate cancer, and are determining factors in current treatment strategies [5, 6]. In this PSA era, however, TNM stages are still useful prognostic indicators, and the N category has been found to be one of the strongest prognostic factors for non-distant metastatic prostate cancer patients [7, 8].

Although some studies indicate that adjuvant radiotherapy (ART) after RP increases survival in patients with LN involvements [9, 10], the role of ART in cases of a limited number of LN involvements remains controversial. Several studies have demonstrated that the prognosis in prostate cancer patients can be stratified according to the number of metastatic LNs [2, 11–15]. Specifically, for patients with a limited number of LN involvements, the survival benefit of ART was reduced or confined to patients with other high-risk factors such as high T categories or Gleason scores [15, 16]. In contrast, it has been suggested that ART has a survival benefit regardless of the number of metastatic LNs [10, 17].

The number of dissected LNs is also correlated with the treatment outcomes. Extended pelvic LN dissection appears to improve the cancer-specific survival (CSS) and progression-free survival rates in patients with LN involvements [14, 18, 19]. Therefore, it is plausible that the survival benefit from ART might depend on the LN ratio (LNR, defined as 100% × [number of involved LNs]/[number of dissected LNs]) [13]. Until now, the survival benefit from ART, stratified based on the number of involved LNs and the LNR, has not been fully evaluated.

With the development of effective systemic treatments, including androgen-depravation therapy (ADT), and the identification of biomarkers, such as PSA, as sensitive follow-up tools, some physicians are reluctant to administer ART. Instead, they prefer prompt salvage radiotherapy (RT) after biochemical failure to prevent overtreatment [20, 21]. Therefore, the development of detailed criteria for ART in patients with involved LNs after RP is crucial.

The Surveillance, Epidemiology, and End Results (SEER) database has documented PSA and Gleason score information since 2004. In this study, we examined a population-based cohort (using data from 2004 to 2014) of patients with prostate adenocarcinoma to investigate the benefits of ART. Subgroup analyses according to the number of involved LNs and the LNRs were performed to identify patients who were most likely to benefit from ART.

Table 1: Characteristics of prostate adenocarcinoma patients after radical prostatectomy before and after propensity-score matching 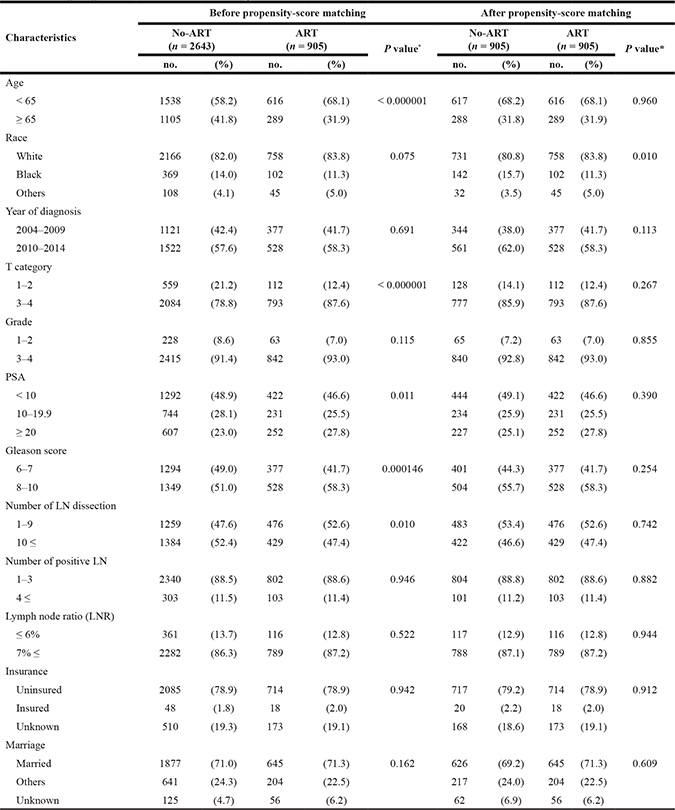 Figure 1: Kaplan-Meier survival estimates of cancer-specific survival rates in the ART and non-ART groups in prostate adenocarcinoma (pN1M0) after radical prostatectomy. (A) Before and (B) after propensity-score matching. ART, adjuvant radiotherapy.

After propensity-score matching, the ART and no-ART groups each contained 905 patients. There were no statistic differences between any of the variables, except race (Table 1). Kaplan-Meier survival analysis compared by the log-rank test demonstrated that ART significantly improved the CSS rate (p = 0.010) (Figure 1B). Kaplan-Meier survival curves remained similar until 5 years after diagnosis; the 5-year CSS rates in the no-ART and ART groups were 91.5% and 93.2%, respectively. However, after 5 years, the difference between the survival curves increased, resulting in 10-year CSS rate of 65.1% and 82.1% in the no-ART and ART groups, respectively.

Table 2: Comparison of 10-year cancer-specific survival rate in prostate adenocarcinoma after radical prostatectomy between the non-ART and ART groups after propensity-score matching

Table 4: Statistical significance of the cancer-specific survival benefit from adjuvant radiotherapy (ART) according to the number of involved lymph nodes and lymph node ratio (LNR) in prostate adenocarcinoma after radical prostatectomy

According to a study of the pattern of failure in prostate cancer patients with positive LNs, the rate of local and/or nodal recurrence was 30.5% among those who experienced clinical recurrence [22]. This result suggests that loco-regional treatment remains essential for patients with positive LNs. Moreover, since ADT is an effective systemic therapy that has been a standard treatment for moderate to high-risk patients, local treatments seem to increase the chance of a cure [23].

Although ART provides a definite survival benefit to prostate cancer patients with positive LNs, when limited numbers of LNs are involved, only patients with additional risk factors appear to benefit from ART. Abdollah et al. [16] demonstrated that in patients with up to 2 positive LNs, ART was only beneficial to patients who were at pT3b/T4 stage, Gleason score 7 to 10, or showed a positive surgical margin. However, LNR was not evaluated in this study.

In our study, when patients with up to 3 positive LNs were confined to T3–4 categories, Gleason score 7 to 10, and the number of examined LNs was 10 or less, ART showed a significant CSS benefit (data not shown). However, when analyzing cases with an LNR of 7% or higher, ART showed a significant CSS benefit regardless of the T category or Gleason score. Therefore, it is likely that adequate loco-regional treatments (e.g., LN dissection and ART) for each patient with LN involvements are as important as the histological characteristics of the cancer to improve the treatment outcome.

A study using the National Cancer Database demonstrated that ART increases the overall survival rate in LN positive prostate cancer [10] and that this benefit was evident irrespective of the number of involved LNs. However, this study did not investigate the association between the LNR and the benefit of ART for each stratum of the number of positive LNs.

In our study, the CSS benefit was pronounced 10 years after diagnosis, which reveals the advantage of salvage treatment, including salvage RT, after biochemical failure. These salvage treatments appear to be effective within 10 years from the time of diagnosis. After 10 years, the difference of CSS rates between the no-ART and ART groups was clear, suggesting that in patients with a long life expectancy, ART should be recommended as one of the primary treatments at the time of diagnosis.

Despite efforts to reduce selection bias using propensity-score matching, unavoidable bias related to the retrospective characteristics and the limitation of the dataset may exist. Even though the SEER database collected PSA and Gleason scores from 2004 onwards, other information, including extracapsular extension, surgical margin, and postoperative PSA, was not provided. Information relating to ADT, salvage treatment, biochemical failure, and loco-regional/distant metastatic recurrences was also not available, although most patients with positive LNs in this study are considered to have received ADT.

Notwithstanding these limitations, this population-based propensity-score matching study demonstrated a definite CSS benefit to ART, even in patients with a limited number of positive LNs provided the LNR is 7% or higher. This finding may provide precise and effective loco-regional treatments for each prostate cancer patient with positive LNs.

In conclusion, prostate cancer patients with up to 3 positive LNs after RP achieved a 10-year CSS benefit from ART provided the LNR is 7% or higher (less than 15, 29, and 43 LN dissections in cases of 1, 2, and 3 positive LNs, respectively). Patients with 4 or more positive LNs obtained a CSS benefit from ART regardless of their LNR. Therefore, to determine the necessity of administrating ART after RP, the number of involved LNs and the LNR should be jointly considered.

SEER 18 registries were used in this study. As the patient population of the data set is de-identified, Institutional Review Board approval was not applicable. From 2004 to 2014, men aged 19 years and older, who were diagnosed with pathologically confirmed primary prostate adenocarcinoma (International Classification of Diseases for Oncology ICD-O-3, C61.9/World Health Organization 2008, 8140/3), were included in this study. TNM categories were adjusted according to the American Joint Committee on Cancer’s staging manual (8th edition), and patients in N1M0 categories were selected. All patients underwent RP (surgery code 50). The number of dissected and involved LNs was determined; at least 1 LN was dissected and at least 1 LN was involved. All patients were included in the following two RT groups: (1) postoperative external beam RT (ART group) and (2) no, unknown, or refused RT (no-ART group). No patient received chemotherapy as a primary treatment. Patients who were diagnosed by death certificate or autopsy only, and who had no information on survival time, race, T category, histology grade, PSA, and Gleason score, were excluded.

The patients in the ART and no-ART groups were compared using Pearson Chi-square analysis before and after propensity-score matching. In an attempt to reduce selection bias inherent in analyses of the no-ART and ART groups, the no-ART group was matched to cases at a ratio of 1:1 using a propensity-score optimal matching algorithm based on age, race, year of diagnosis, T category, histology grade, PSA, Gleason score, the number of dissected LNs, the number of involved LNs, insurance, and marital status. Propensity-score matching was carried out by the R statistical software version 3.4.1 (www.r-project.org) using the “MatchIt” and “optmatch” R packages. The cut-off points of LNR for CSS before and after propensity-score matching were examined using the “maxstat” R package. Other statistical calculations were performed using SPSS software version 22 (SPSS, Chicago, IL).