Conclusion: ERK signaling pathway was more activated in epirubicin treated TNBC, possibly contributing to the epirubicin resistance in TNBC, it implicated that ERK pathway could be used as an novel candidate for targeting therapy in refractory and relapse TNBC.

ERK pathway is one of the best characterized kinase cascades in cancer cell biology [1]. It is triggered by either growth factors or activating mutations of major oncogenic proteins in this pathway, the most common being RAS and RAF. Deregulation of this pathway is frequently observed and plays a central role in several cancers, including melanoma, pancreatic, lung and colorectal cancer [2]. Targeting these kinases has already acquired a good effect in cancer therapy.

TNBC is defined as tumors that lack expression of estrogen receptor (ER), progesterone receptor (PR) and human epidermal growth factor receptor 2 (HER2), constitutes 10%-20% of all breast cancer, more frequently affects younger patient [3, 4]. TNBC tumors are generally larger in size, are of higher grade, have lymph node involvement at diagnosis, and are biologically more aggressive. It was reported that women with TNBC had shorter relapse free survival time than women with other types of breast cancer, less than 30% of women with metastatic TNBC survive 5 years, and almost all die of their disease despite adjuvant chemotherapy [5, 6]. Due to the less mutation frequency of ERK pathway kinases and lack expression of HER2, TNBC is poorly response to ERK pathway targeting therapy. Nevertheless, few studies concerned ERK pathway might be activated after chemotherapy in TNBC.

In this study, we investigated ERK pathway components and regulation genes changes after epirubicin treatment, tried to offer a novel targeting candidate for TNBC.

A retrospective overview of ERK pathway inhibitors in cancer treatment

TNBC is always considered as a refractory subtype of breast cancer as survival for patients are shorter than other types of breast cancer, although some of them are well responsed to epirubicin contained chemotherapy, resistance and relapse still exist as the main challenge for TNBC treatment. Here we applied an online GEO dataset (GSE43816) for GSEA to discuss the molecular changes in epirubicin treated TNBC. This cohort study of 7 women with primary invasive TNBC were collected for tumor specimen before and after 4 cycles of NAC with epirubicine and cyclophosphamide, followed by 4 cycles of taxanes. Total RNA was extracted from tumor specimens and the whole transcriptome was quantified with Affymetrix HuGene 1.1 ST. Among top 20 enriched pathways in posttreatment tumors, most of them were related with drug and molecule metabolism. Additionally, ABC transporters related genes were also enriched in epirubicin treated samples, which supported these tumors were disposed to chemoresistance (Figure 1). 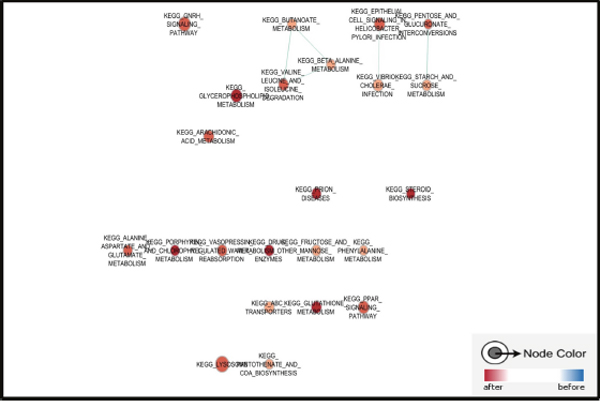 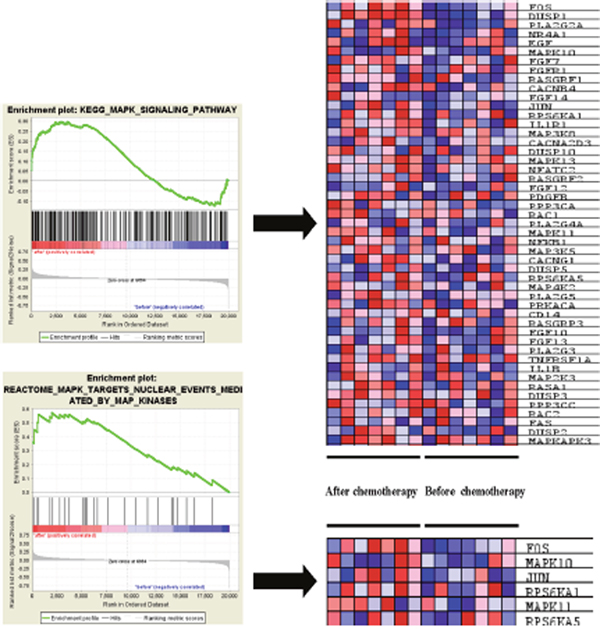 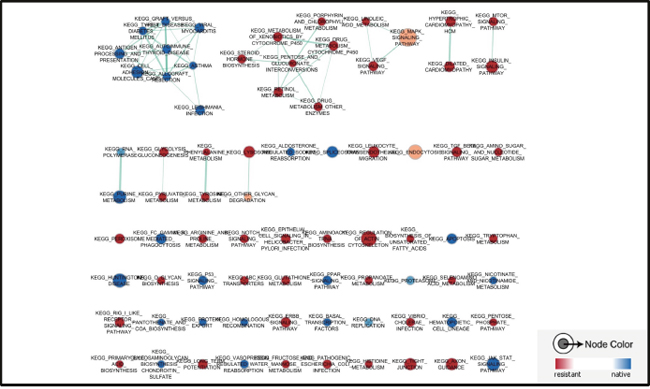 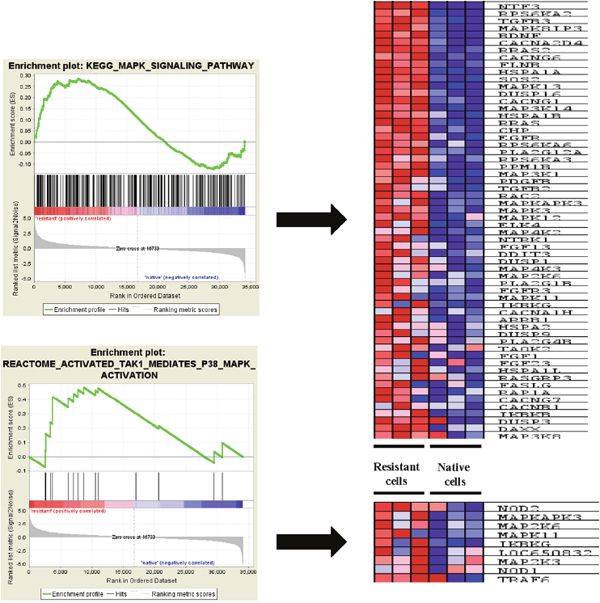 Moreover, we selected top 5 MAPK family genes to run a real time PCR, and found mRNA expression change is consistent with the GSEA analysis results, all P value is less than 0.05 (Supplementary Figure 1A). 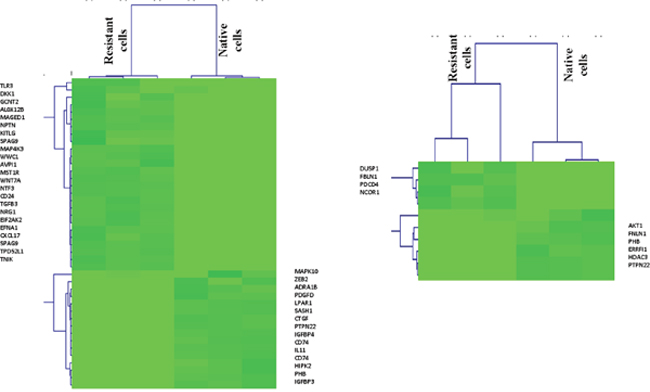 The ERK pathway is one of the best-characterized kinase cascades in cancer cell biology. It is triggered by growth factors or activating mutations of oncogenic kinases such as KRAS, BRAF involved in this pathway. Deregulation of the ERK pathway is observed in several cancers and yields multiple changes in the expression of numerous genes involved in tumor cell differentiation, proliferation, survival, migration, and angiogenesis [1]. Kinases of this pathway are promising targets for identifying novel therapies.

Presently, mounts of inhibitors to ERK signaling pathway are being tested in clinical trials, some of them have already been successfully applied in cancer treatment and emerge as an optional therapy for patients with refractory and relapsed tumor [7–10]. However, most of tumors responsing to the targeting therapy possess oncogenic kinases mutations, the antitumor activity always relies on degrade of activation of ERK pathway [11, 12]. Within retrospective review of recent studies about ERK pathway inhibitors, we found melanoma, NSCLC and colon cancer were always well responsed to targeting therapy [11, 13, 14]. It was reported that breast cancer rarely possessed ERK pathway kinases mutations, BRAF (2%), KRAS (5%), and HRAS (1%) mutations occur at even lower frequency in TNBC [15, 16], only a few of studies recognized breast cancer as a good candidate of ERK pathway targeting therapy. TNBC were significantly more sensitive to MEK inhibition relative to luminal and HER2 amplified lines [16], due to having an activated RAS like transcriptional program [15].

Chemotherapy remains the important strategy for TNBC treatment following mastectomy, it has elevated a lot in 5 years overall survival rate since it becomes the standard adjuvant therapy for breast cancer. Epirubicin, taxol and cyclophosphamide compose the first line of chemotherapeutics recommended by the guideline [17]. Nevertheless, drug resistance in TNBC is the major obstacle to a successful outcome following chemotherapy treatment. While up-regulation of multidrug resistance (MDR) genes is a key component of drug resistance in multiple cancers, the complexity and hierarchy of non-MDR driven drug resistance pathways are still largely unknown [18]. There are studies identifying pathways and genes contributing to drug resistance, which contribute to several biological pathways, including cell cycle, chromosomal maintenance, epigenetics, RNA and mitochondrial transcription [19–21]. In our study, we applied two GEO online datasets of genes expression to analyze the molecule changes after chemotherapeutics, especially for ERK pathway change.

In our GSEA results, we found most pathways enriched in chemotherapeutics treated tumor samples and cells were associated with drug metabolism and ABC transporter, which was consistent with the previous findings about chemoresistance. Also, ERK pathway was enriched in tumor samples receiving chemotherapy, which contributed to the resistance and relapse in TNBC. In epirubicin resistant TNBC cells, ERK pathway enrichment was further proved within GSEA and enrichment map analysis. This interesting finding implicated that epirubicin resistant subtype of TNBC could be an optimal candidate for ERK pathway targeting therapy. To make a further validation, we explored and found ERK phosphorylation elevation in MDA-MB-231 cells treated with epirubicin, which further implicated ERK pathway inhibitors could be used together with epirubicin or in epirubicin resistant cells.

In summary, we firstly proved that chemotherapeutics especially epirubicin could enhance ERK phosphorylation in TNBC. The hints of ERK pathway inhibitors application in TNBC after receiving chemotherapyshould be promising but needs a proof in clinic.

Protein was isolated as literatures described. Briefly, protein was extracted using RIPA buffer (Beyotime, Shanghai, China) containing a mixture of protease inhibitors and phosphatase inhibitors (Sigma-Aldrich, Saint Louis, MI). After extraction, the protein was quantified using a BCA kit (Thermo Fisher Scientific). The protein samples were denatured then stored at -20°C until use.

Western blot analysis was performed as literature described. Briefly, 40 μg of protein from each sample was separated by SDS-PAGE according to molecular weight. The proteins were transferred to an equilibrated polyvinylidene difluoride membrane (Amersham Biosciences, Buckinghamshire, UK) and then incubated with a specific primary antibody at 4°C overnight. After incubation with the secondary antibody, the proteins were detected by enhanced chemiluminescence. The band intensity was quantified with Quantity One software.

Statistical analysis was done using Student's t-test, variance analysis and/or non-parametric tests. For all the tests, P<0.05 was considered as statistical significance. All statistics were calculated by SPSS 13.0 or R software.

This work was supported by research grants from National Natural Science Foundation of China (31171243 to GS.R.).