Gastric cancer (GC) is the fourth most common type of cancer globally and the main cause of cancer-related mortality worldwide, specifically in Asian countries [1, 2]. An estimated 26,370 people will be diagnosed of gastric cancer and 10,730 people will eventually die of gastric cancer in the United States, in 2016 [3]. More than 70% of cases occur in developing countries, Eastern Asia (mainly in China) occupies half of the world total cases [4]. The survival of early primary gastric cancer patients has improved because of early tumor detection, curative surgical resection and adjuvant therapy. However, gastric cancer is often diagnosed at an locally advanced stage [5]. Complete resected with D2 lymphadenectomy is widely regarded as the standard of care [6]. However, even after D2 gastrectomy and effective adjuvant chemotherapy, locoregional recurrence and distant metastasis are remarkable problems, and the survival time is usually unsatisfactory. Researchers have begun to seek and explore new and more effective treatment options for locally advanced gastric cancer patients without distant metastases. The Intergroup 0116 (INT 0116) study suggested that adjuvant chemoradiotherapy after curative surgery Improved survival outcome [7] was reconfirmed in several studies [6, 8, 9].

Radiation therapy is used more commonly in treatment of gastric cancer at present [10]. However, in Eastern Asia countries D2 gastrectomy is accepted as a standard surgical procedure, adjuvant RT is not commonly given to completely resected patients [11, 12]. However lacking sufficient evidence from large randomized trials, adjuvant RT after D2 dissection remained controversy. In this study, we retrospectively analyzed whether gastric cancer patients without distant metastases might benefit from postoperative radiation therapy.

Table 1: The characteristics of patients with gastric cancer without distant metastases

T-stage, N-stage and AJCC tumor stage according to the 7th edition of AJCC TNM staging.

Table 2: Survival rate (%) and MST(Months) of patients with gastric cancer with distant metastases 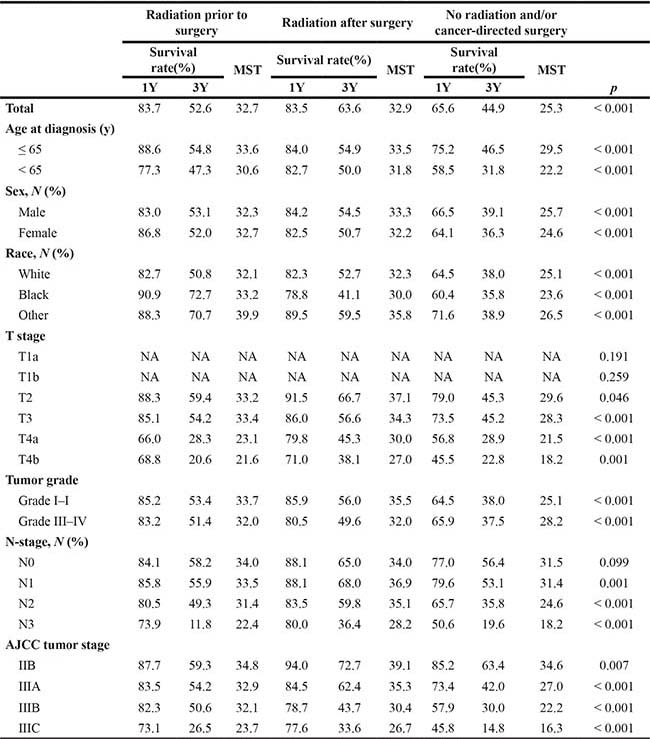 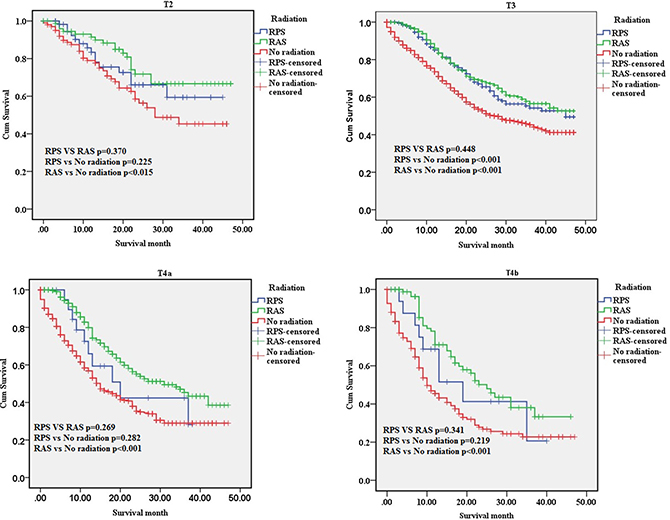 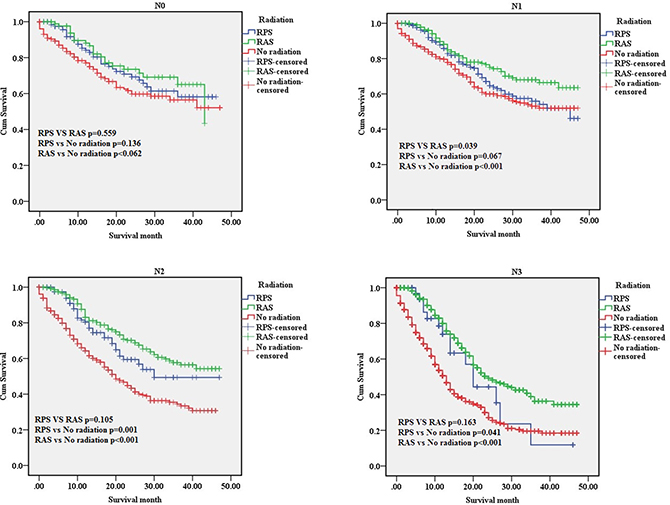 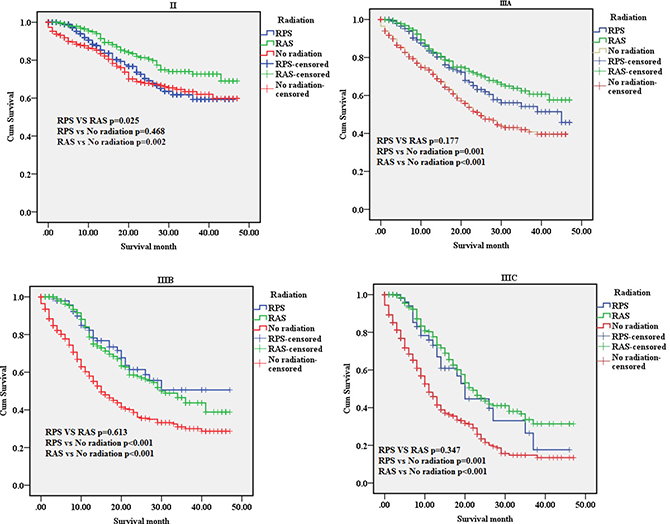 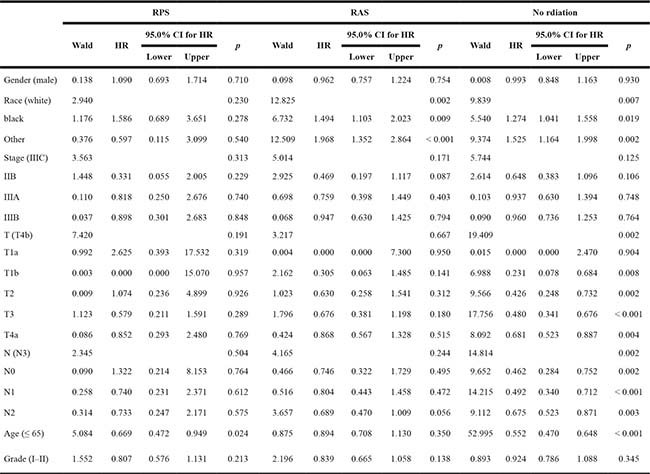 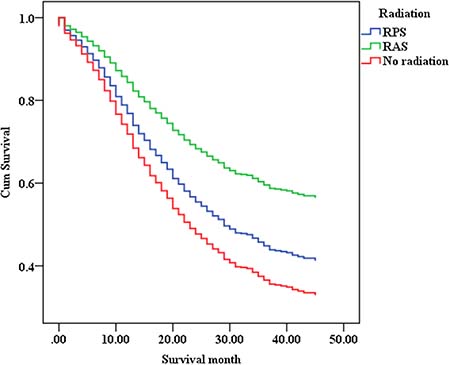 In a review based on 9 studies, Valentini et al. reported that the 5-year survival of resectable gastric cancer patients statistically significant benefit with the addition of RT [14]. Recently, SUNG KIM et al. reported radiation treatment after D2-resected gastric-cancerpatients can decrease recurrence and prolong survival especially patients with IIIA and IIIB patients [15]. A meta-analyses also verified that Preoperative (chemo)radiotherapy might be associated with the significant improvement in overall survival compared with over surgery alone [16]. All these studies demonstrated that radiation treatment was a potential approach to improve the outcome of selected resectable gastric cancer patients without distant metastases. Recently, the opposite result was reported there was neither survival benefit no net medical cost advantage by adding RT in Gastric Cancer adjuvant treatment [17].

However, not all resectable patients without metastatic gastric cancer obtained a survival benefit from radiation.

Among those with stageT2, T4a,T4b,IIB,N0 and N1 cancer, no statistically significant differences were found in prolong survival time between RPS and no radiation groups (p > 0.05).

In N0 subgroup no radiation survival time is better than RPS, and no statistically significant differences were found in RAS.

Multivariate analysis of overall survival by Cox proportional hazards modelling, we found that the survival improvement of patients in the radiation treatment groups was significantly higher compared with that of patients in the surgery only. It reported that the 5-year survival rates were consistently longer in the postoperative chemoradiotherapy group at Stages II, IIIA, IIIB, and IV than those in the surgery only group [15].

Some limitations may have influenced the results of this study. First, our study are inherent to the methodology of retrospective analyses, including selection bias and potential confounders. Because of insufficient sample capacity we integrated the data of the following patient groups to reduce bias: Grade I and grade II were integrated into the grade I–II subgroup, Grade III and grade IV were integrated into the grade III–IV subgroup. Second, information such as the chemotherapy status, which kind surgery was performed D1 or D2 gastrectomy, locoregional recurrence, radiation techniques, total doses, fractionations, radiation-related toxicity and comorbidities were not included in the SEER database.

Finally, the determination of the T-stage, N-stage tumor stage of patients who underwent surgery depended on the postoperative pathologic results, while for those RPS patients tumor stage at diagnosis were unclear.

In conclusion, we sought to evaluate whether resectable gastric cancer patients without distant metastases would benefit from radiation. The results showed that radiation treatment was able to improve effective survival time in T3, T4a, T4b, N1, N2, N3, IIIA, IIIB and IIIC cancer. RPS is different from RAS in special subgroup.

From the results of this study, we considered that patients who were younger and those with locally advanced stage primary tumors might obtain a greater survival benefit from radiation treatment than others.

Additionally, radiation therapy may strengthen the survival benefit that is gained from surgical treatment. Our study was a retrospective analysis with limitations and further prospective randomized trial are needed to validate our hypothesis.

The Surveillance, Epidemiology, and End Results Program (SEER) database is an authoritative source of information on cancer incidence and survival, sponsored by the National Cancer Institute. In the SEER database, currently collects and publishes cancer incidence and survival data from 18 population-based cancer registries, which covers approximately 28 percent of the population in the United States.

Count data were analyzed by chi-square test. The median survival time (MST) and survival curves, were estimated with the Kaplan-Meier method, and the log-rank test was performed to evaluate survival in the different groups. Hazard ratios (HRs) along with 95% confidence intervals (CI) were calculated using the multivariate Cox proportional hazard regression model to determine the influences of other factors including age, race, gender, grade, histological type, T-stage, and N-stage, on survival. Statistical tests were two-sided, p < 0.05 was considered statistically significant. SPSS22.0 (SPSS Chicago, IL, USA) software was used for the statistical analysis.