Lung cancer becomes a main reason of cancer mortality throughout the world [1, 2]. Non-small cell lung cancer (NSCLC) is a major type cancer. NSCLC with metastasis is the primary cause of lung cancer mortality [3-5]. Thus, exploring the mechanisms of NSCLC tumorigenesis could be very helpful for NSCLC treatment through identifying effective therapies.

It is well-known that microRNAs (miRNAs) do not encode protein sequences, but negatively control mRNA stability and/or inhibit mRNA translation [6-8]. They can play important roles in various stages of tumorigenesis and tumor development [9]. Depending on the different target genes, miRNAs can promote or inhibit tumorigenesis [10, 11]. Accumulating reports indicated miR-455-5p is critical for many cancers. For example, miR-455-5p expression levels correlated with clinicopathological features and thus served as a prognostic and diagnostic biomarker in endometrial serous adenocarcinomas [12], basal cell carcinoma [13], laryngeal cancer [14], and hepatocellular adenoma [15]. It has been reported that miR-455-5p promoted melanoma metastasis by inhibiting CPEB1 [16]. However, the function of miR-455-5p in NSCLC is currently unknown.

In this study, we explored the function of miR-455-5p in NSCLC development. Our results showed that miR-455-5p promotes tumor growth and metastasis through inhibiting SOCS3 in NSCLC. 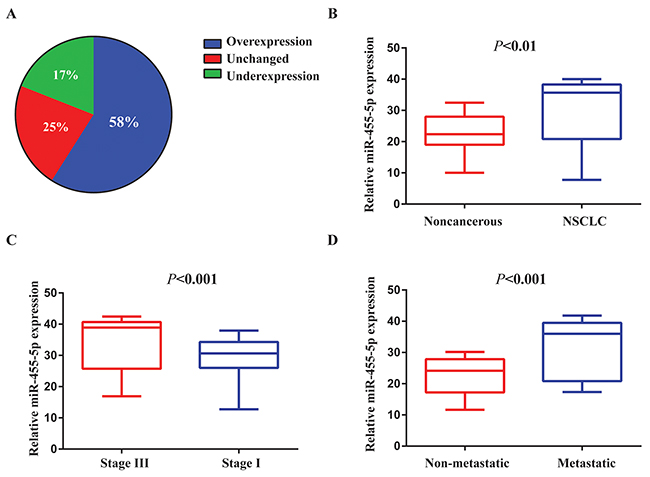 Figure 1: miR-455-5p is up-regulated in human NSCLC tissues and associated with NSCLC progression. (A) The expression levels of miR-455-5p in 79 paired NSCLC and corresponding noncancerous tissues were measured by TaqMan real-time PCR and normalized against an endogenous U6 RNA control. (B) The expression of miR-455-5p was overexpressed in NSCLC tissues compared with the noncancerous tissues. (C) miR-455-5p expression was detected in different clinical stages of NSCLC. (D) The up-regulation of miR-455-5p in NSCLC was associated with tumor metastasis; the patients were classified into tumor metastasis negative and positive groups (lymph nodemetastasis and/ or distal metastasis) Error bars represent SEM. The qRT-PCR were analyzed and shown as relative miR-455-5p levels of the Ct (cycle threshold) values. The statistical analysis was performed using paired t test (B) and Student’s t test (C) and (D).

Using the computational prediction program TargetScan, we found that suppressor of cytokine signaling (SOCS) 3, which plays a role in the feedback inhibition of JAK/STAT signaling [17-19], was a supposed target of miR-455-5p (Figure 2A). To explore whether miR-455-5pregulates SOCS3, the wild-type SOCS3 3’-UTR was cloned, and transfected the reporters together with control RNA or miR-455-5p mimics. Co-transfection of miR-455-5p mimics notably blocked (1.7 fold) the wild-type reporter activity, in contrast, the mutant reporter was almost not affected (Figure 2B), suggesting that SOCS3 is a target of miR-455-5p. 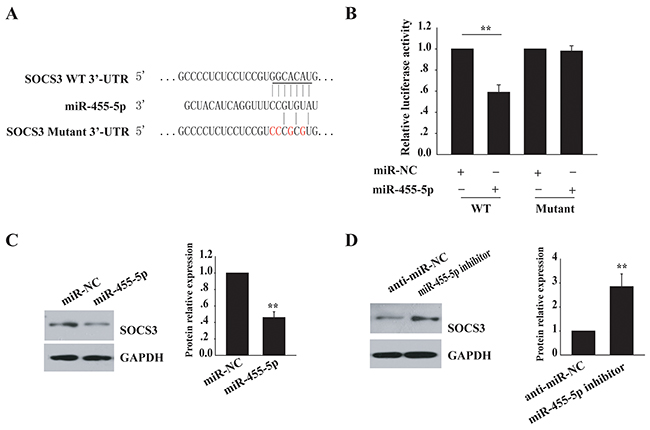 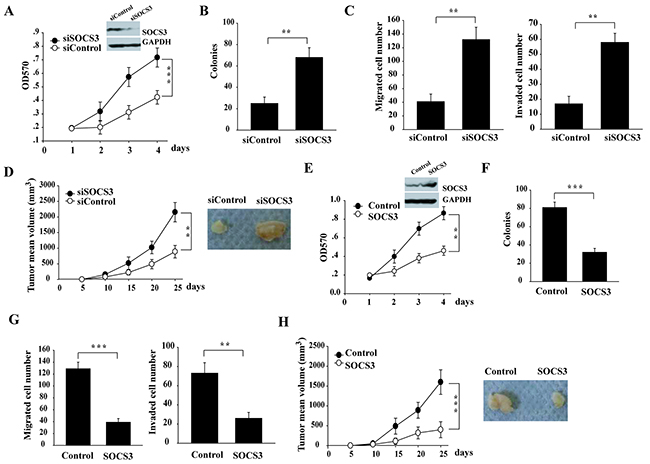 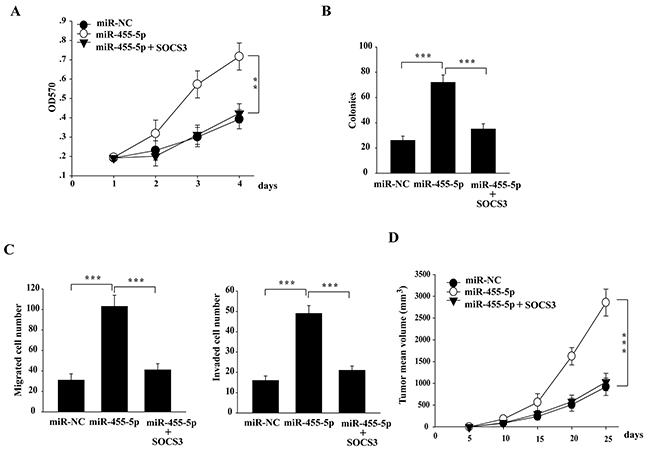 IHC assay showed that nuclear SOCS3 was strongly expressed in most non-cancerous lung tissues, however, SOCS3 was less found in NSCLC tissues (Figure 5A and 5B). NSCLC patients with high SOCS3 levels showed much longer median overall survival, compared with those with low SOCS3 levels (P < 0.05, Figure 5C). 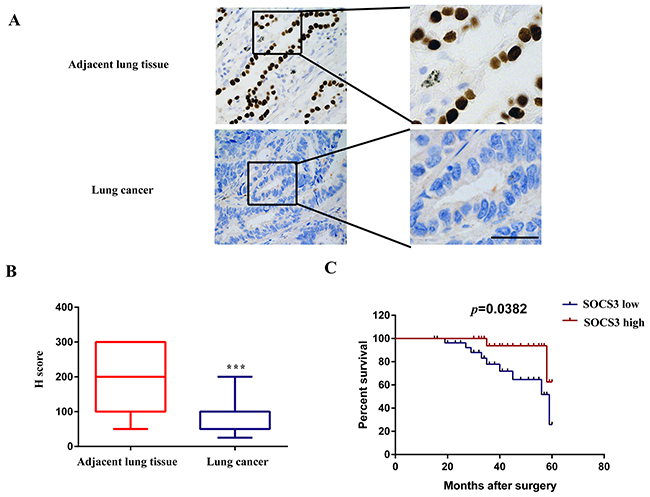 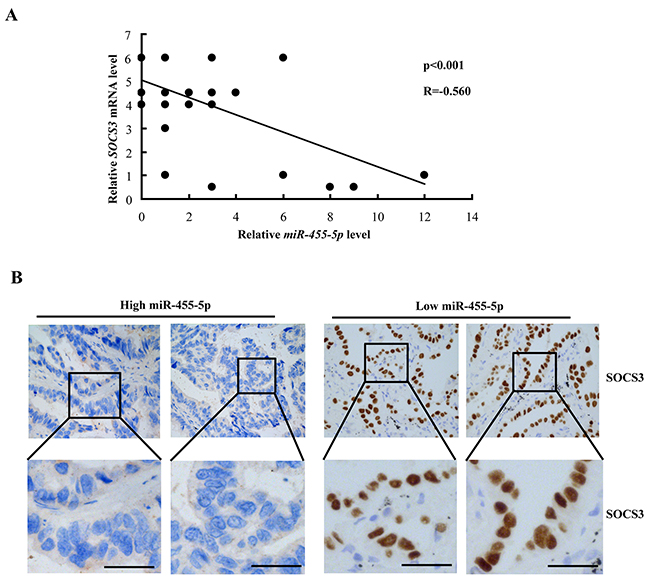 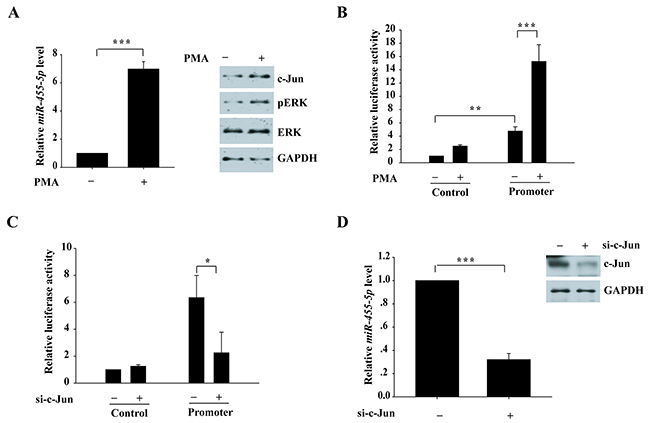 Lung cancer is very common lethal types of cancer [20-22]. It is very valuable to further explore the potential mechanisms of NSCLC due to its poor clinical outcome [23-25]. Recently, many reports have indicated that many miRNAs play key roles in tumor progression, including lung cancer [26-36].

The JAK-STAT pathway plays critical roles in the initiation and development of tumors. The SOCS3 protein is an inhibitor of activation of the JAK-STAT pathway [41, 42]. SOCS3 inhibited tumor cell proliferation, migration, and invasion in many tumor types [17-19]. We further found c-Jun binds to the miR-455-5p promoter region. Luciferase reporter assays showed that ERK activation markedly promoted the luciferase activity of a miR-455-5p promoter reporter. Accordingly, our in vitro analyses demonstrated increased miR-455-5p expression after activation of ERK in lung cancer cells. Overall, our results suggest that up-regulated expression of miR-455-5p might be attributable to the binding of ERK to the miR-455-5p promoter.

Overall, miR-455-5p promotes the growth, migration, invasion through directly targeting SOCS3. We further show that ERK signaling controls the regulation of miR-455-5p expression in NSCLC. Hence, the ERK/miR-455-5p/SOCS3 pathway might be an ideal target for therapeutic intervention in certain NSCLC patients.

Lung cancer specimens and matched adjacent non-cancerous tissues (n = 79) were collected from patients with NSCLC in Harbin Medical University Cancer Hospital from 2009 to 2012. The tissues were stored at -80°C until use. All samples were from patients who had not undergone preoperative radiotherapy or chemotherapy. The pathological staging of the 79 tumors was performed according to the tumor-node-metastasis (TNM) staging system.

Quantitative real-time PCR was used to precisely quantify miR-455-5p expression in human NSCLC tissues or cell lines. Quantitative RT-PCR was performed with SYBR Green reagents (Takara, Japan) in a 7500 real-time PCR system from Applied Biosystems. The 2−ΔΔCT method was used to measure the miR-455-5p gene expression compared with the endogenous controls (U6 non-coding small nuclear RNA). All primers for miR-455-5p and the U6 genes were designed by Primer Premier 5.0 and synthesized by Shanghai GenePharma.

The 3′-untranslated region (UTR) WT and mutant of human SOCS3 were amplified from human genomic DNA and individually inserted into the pmiR-RB-REPORTTM (Ribobio, Guangzhou, China). For reporter assays, cells were co-transfected with wild-type (mutant) reporter plasmid and miR-RiboTM mimics (miR-RiboTM negative control) using Lipofectamine 2000 (Invitrogen). The cells were then harvested and analyzed with the Dual Luciferase Reporter Assay system (Promega). All assays were performed in triplicate, and all values were normalized for transfection efficiency against Renilla luciferase activities. Primers are provided in Supplementary Table 1.

For cell proliferation assays, cells were seeded into each well of a 96-well plate (2000 per well) and the cell proliferation ability was determined using the Cell Counting Kit-8 (CCK8) Assay Kit (Dojindo Corp, Japan): 10 μl of the kit reagent dissolved with 100 μl DMEM was added to each well, and 2 h later the absorbance was measured at 570 nm to calculate the number of cells.

Cells were seeded at approximately 2000 cells/well in a 6-well plate. After 14 days incubation, the cells were washed with PBS twice, fixed with methanol for 10 min, and stained with 0.5% crystal violet for 20 min at room temperature. The visible colonies were counted.

Cell migration and invasion assays were performed using a 24-well plate with 8-μm pore size chamber inserts (Corning). For migration assays, 5×104 cells were placed into the upper chamber per well with the non-coated membrane. For invasion assays, 1×105 cells were placed into the upper chamber per well with a Matrigel-coated membrane that was diluted with serum-free culture medium. In both assays, cells were suspended in 200 μl of DMEM without FBS when they were seeded into the upper chamber. In the lower chamber, 800 μl of DMEM supplemented with 10% FBS was added. After incubation for 16 h at 37°C and 5% CO2, the membrane inserts were removed from the plate, and non-migrated or non-invading cells were removed from the upper surface of the membrane. Cells that moved to the bottom surface of the chamber were fixed with 100% methanol for 20 min and stained with 0.1% crystal violet for 30 min. Then, the cells were imaged and counted in at least 8 random fields. The assays were conducted three independent times.

Immunohistochemistry of patient tissue sections was performed as recently described [20]. The dewaxed 5-μm sections were subjected to an antigen-demasking procedure of brief, high temperature heating of the sections immersed in citrate buffer. Endogenous peroxidases were blocked with 0.3% hydrogen peroxide, and nonspecific binding was blocked with 5% normal goat serum and 2% BSA in phosphate-buffered saline (PBS). Sections were then incubated for 2 hours at room temperature with anti-SOCO3 antibody (1:50; Santa Cruz Biotech). After washing with PBS, sections were incubated with biotinylated secondary antibody, followed by a further incubation with the streptavidin–horseradish peroxidase complex. The sections were then immersed in DAB for 5 to 10 minutes, counterstained with 10% Mayer hematoxylin, dehydrated, and mounted in crystal mount.

All animal work was performed in accordance with the institutional ethical guidelines for animal experimentation. Twenty-four hours after transfection of RNA oligonucleotide and/or plasmid DNA, approximately 2 x 106 cells were suspended in 100 mL of DMEM and then injected subcutaneously into male BALB/c athymic nude mice at 6 to 8 weeks of age. Six mice were included in each experimental group. Tumor growth rates were examined every 5 days for 25 days. Tumor growth rates were analyzed by measuring tumor length (L) and width (W) and calculating the volume with the formula LW2/2.

All results were presented as the mean ± standard error of the mean (SEM). A Student t test was performed to compare the differences between treated groups relative to their paired controls. One-way ANOVA was used to analyze tumor growth data. P values are indicated in the text and figures above the two groups compared with a value <0.05 (denoted by asterisks) considered significant.