Interleukin 15 (IL-15) is a cytokine exhibiting antitumor characteristic similar to that of IL-2. However, in human tissues and cells, IL-15 expression and secretion is very limited, suggesting IL-15 functions mainly intracellularly. In the present study, we assessed the effects of transfecting NCI-H446 small cell lung cancer cells with genes encoding three IL-15 variants: prototypical IL-15, mature IL-15 peptide, and modified IL-15 in which the IL-2 signal peptide is substituted for the native signal peptide. NCI-H446 cells transfected with empty plasmid served as the control group. We found that IL-15 transfection effectively inhibited NCI-H446 cell proliferation and arrested cell cycle progression, with the modified IL-15 carrying the IL-2 signal peptide exerting the greatest effect. Consistent with those findings, expression each of the three IL-15 variants reduced growth of NCI-H446 xenograph tumors, and the modified IL-15 again showed the greatest effect. In addition, IL-15 expression led to down-regulation of the positive cell cycle regulators cyclin E and CDK2 and up-regulation of the negative cycle regulators p21 and Rb. These findings suggest IL-15 acts as a tumor suppressor that inhibits tumor cell proliferation by inducing cell cycle arrest.

Among the new approaches to treating various cancers is gene therapy, in which the gene encoding an anti-tumor cytokine is transfected into the tumor cells [1, 2]. For example, the cytokine IL-15 exhibits biological activity similar of IL-2 in that it enhances proliferation of CD8+CTL and natural killer (NK) cells, which in turn kill tumor cells [3-9].

IL-15 mRNA is readily detected in many kinds of cells and tissues, but secretion of the corresponding protein is rarely detected, which suggests IL-15 protein expression is controlled by posttranscriptional mechanisms – i.e., at the level of protein translation and intracellular trafficking [10-18]. Alternatively, other data suggest IL-15 carries out its biological functions mainly intracellularly [19]. It was observed in nude mice inoculated with tumor cells that transfecting the cells with a gene encoding prototypical IL-15 did not yield a promising anti-tumor effect. It was suggested that the long signal peptide expressed with IL-15 acts as an inhibitor to IL-15 secretion; however, transcription of a modified IL-15 gene lacking the signal peptide did not substantially increase IL-15 secretion [20].

In an earlier study, we observed that transfection with genes encoding different IL-15 variants genes led to obvious decreases in the proliferation of NCI-H446 small cell lung cancer cells. One of the malignant characteristics of these tumor cells is accelerated proliferation resulting in part from cell cycle dysregulation. Cell proliferation is controlled in part by cell cycle-positive/negative regulatory molecules, including cell cycle protein (cyclin), cyclin-dependent kinase (CDK), p21 and retinoblastoma (Rb) [21, 22]. In the present study, we examined the effects of transfecting genes encoding different IL-15 variants on the cell proliferation and the expression of cell cycle-positive/negative regulatory molecules in NCI-H446 cells were examined, and the tentative anti-tumor activities of transfected genes were observed in vivo. 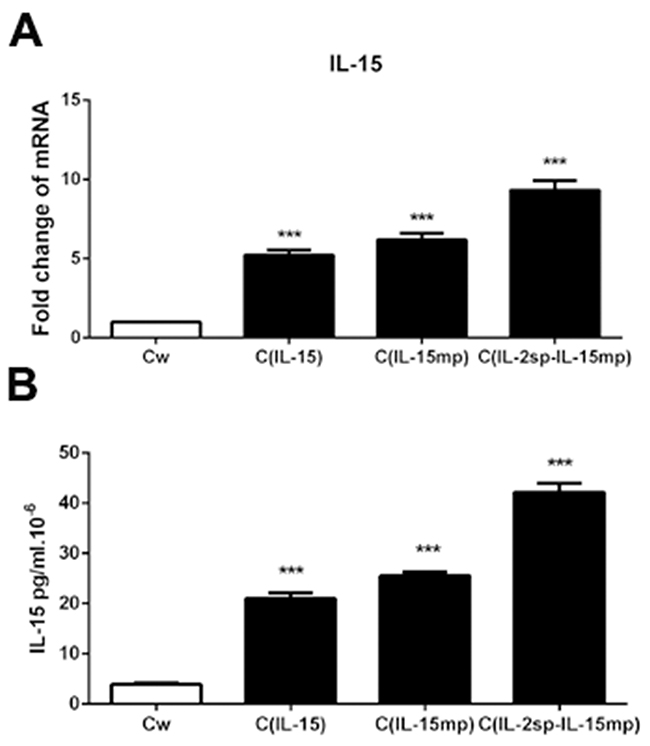 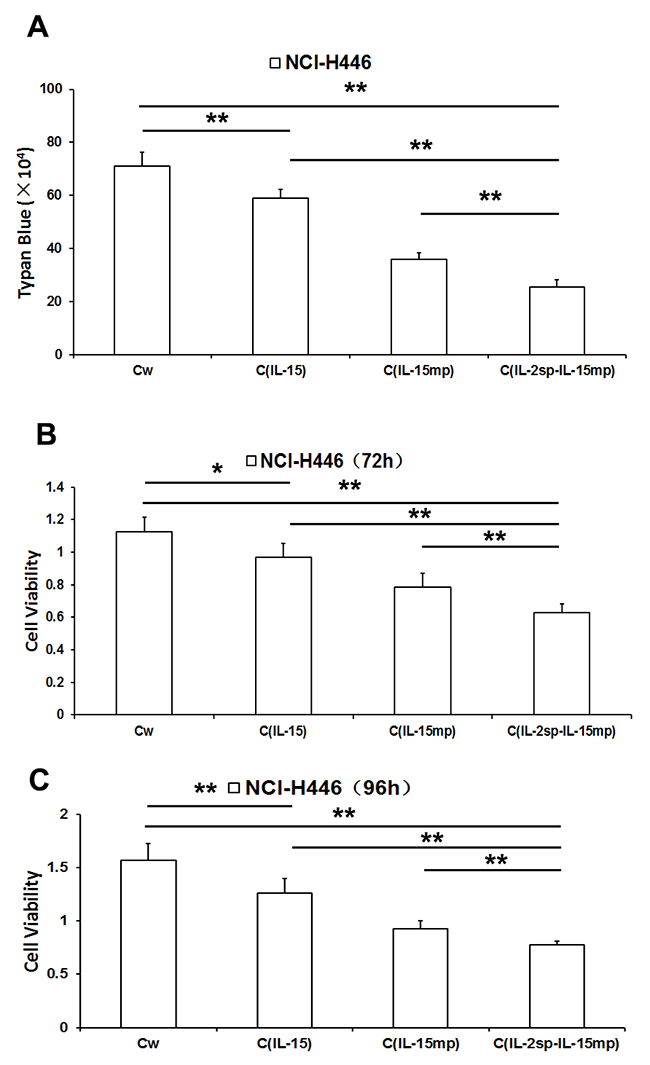 The cell cycle is a key determinant controlling cell proliferation. We therefore tested the effects of expressing the different IL-15 variants on the NCI-H446 cell cycle. We observed that the cell fractions in G0/G1 or S phase were significantly higher in the three transfectant groups than in the control group (Figure 3A-3C). Moreover, NCI-H446 cells in the CIL-2sp-IL-15mp group exhibited the greatest potential for cell cycle arrest. These results suggest that expression of prototypical IL-15 effectively inhibited NCI-H446 cell cycling, and the IL-2 signal peptide strengthened the inhibitory effect of IL-15 on the cell cycle. 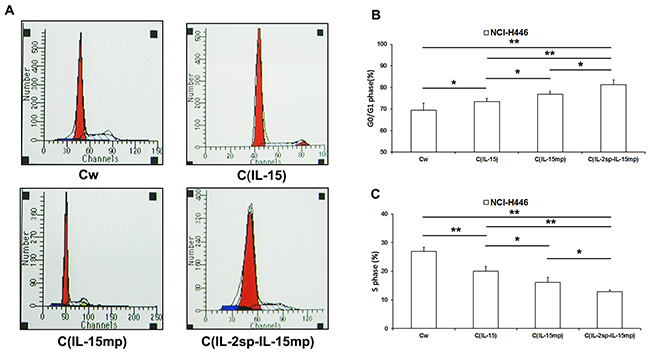 Effect on the expression of cell cycle-positive regulatory molecules 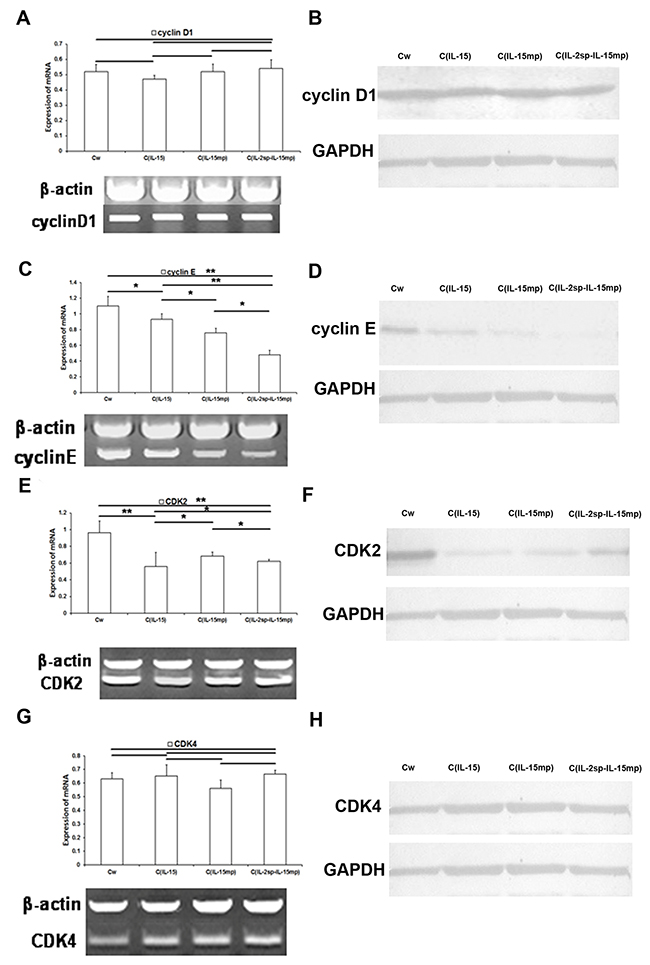 Similarly, expression of CDK2 mRNA and protein was lower in the CIL-15, CIL-15mp and CIL-2sp-IL-15mp groups than in the control group (Figure 4E and 4F). By contrast CDK4 levels did not significantly differ among the four groups (Figure 4G and 4H).

Effect on the expression of cell cycle-negative regulatory molecules

Because p21 and Rb reportedly play key roles in the cell cycle [23], we examined the effect of expressing each of the three IL-15 variants on p21 and Rb expression. Levels of p21 mRNA and protein were significantly higher in the CIL-15 than the control group. On the other hand, levels of p21 in the CIL-15mp and CIL-2sp-IL-15mp groups did not differ from control (Figure 5A and 5B). This suggests prototypical IL-15 gene transfection could promote p21 expression, but IL-15 mature peptide gene and the IL-15 modified gene couldn’t. 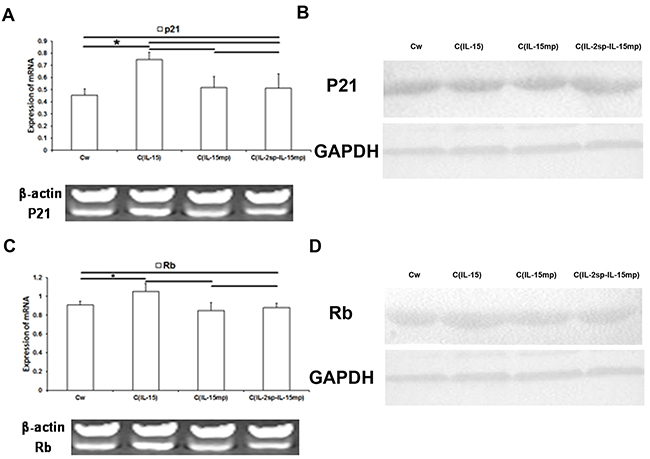 The anti-tumor potential of IL-15 in NCI-H446 cells

To assess the anti-tumor activity of IL-15 in vivo, equal volumes of the three NCI-H466 transfectants were injected subcutaneously into mice. The apparent tumorigenicity of cells from the CIL-15, CIL-15mp and CIL-2sp-IL-15mp groups was lower than that of control NCI-H466 cells (Figure 6A-6C). In particular, tumors formed by cells from the CIL-2sp-IL-15mp group exhibited the smallest weights and volumes. Thus IL-15 appears to effectively reduce the tumorigenicity of NCI-H466 small cell lung cancer cells. 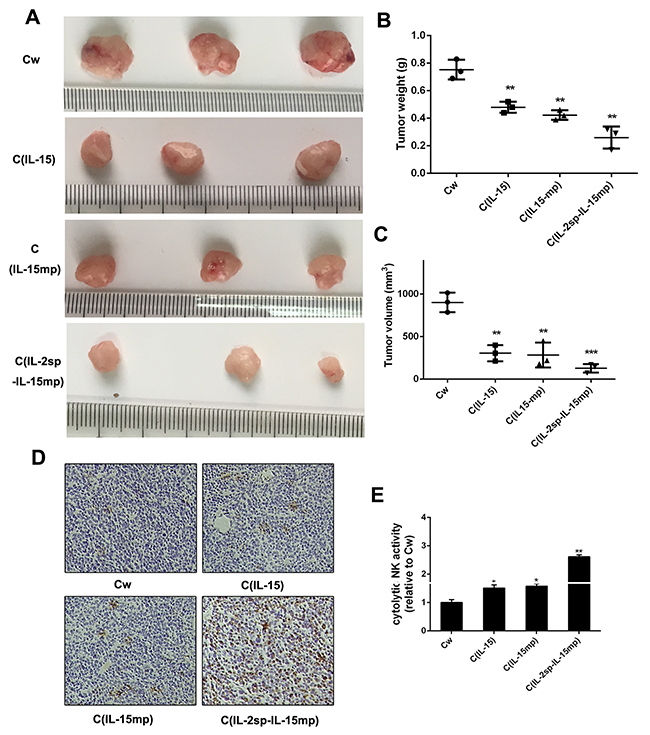 Figure 6: Anti-tumor potential of IL-15 in NCI-H446 cells. Tumorigenicity was detected in vivo. Photographs were taken 4 weeks after subcutaneous injection. (A) Photographs of representative tumors. (B, C) Quantitative analysis of tumor weights and volumes in the indicated groups. Data are presented as the means (±SD) of three independent experiments (**P < 0.01, ***P<0.001). (D, E) Infiltrating cells were isolated from tumor tissues and stained with anti-NK cell antibodies (*P<0.05, **P<0.01).

IL-15 was a cytokine with biological activity similar to that of IL-2. For example, like IL-2 it enhances CD8+CTL and NK cell proliferation and tumor cell killing. As such, IL-15 is one of the most promising molecules for antitumor immunotherapy. On the other hand, transfecting tumor cells with prototypical IL-15 before injecting them into nude mice did achieve a promising antitumor effect. Much research has focused on the ability of IL-15 to inhibiting tumor cell proliferation in vivo [25], but the potential mechanism underlying the antitumor activity of IL-15 also involves up-regulating NK cell and CTL activity. Consistent with that idea, we found that modifying IL-15 with the IL-2 signal peptide enhanced IL-15 secretion as well as its ability to induce cell cycle arrest in NCI-H446 small cell lung cancer cells and increase NK cell antitumor activity.

Molecules affecting cell proliferation include those that exert a stimulatory effect, such as cyclin and CDK [26-29], and those that exert an inhibitory effect, such as p21 and Rb [21-22]. Rb is a tumor suppressor gene whose product acts as a negative regulator of the cell cycle, and its function loss can directly result in tumor development. Cyclin D1 and cyclin E are overexpressed in some tumor cells, where they induce cell cycle progression from G1 to S phase. Inhibiting their expression can induce cell cycle arrest in G0/G1 phase, thereby suppressing cell proliferation [27-29]. p21 binds to and inhibits the activities of CDK2 and CDK4. p21 also inhibits the activity of PCNA by inhibiting the DNA synthesis directly. In the present study, we found that the inhibitory effect on the cell cycle in the CIL-2sp-IL-15mp group was likely mediated by cyclin E and CDK2, not cyclin D1 or CDK4. However, we also found that whereas prototypical IL-15 increased expression of both p21 and Rb, cells in the CIL-2sp-IL-15mp group did not exhibit a significant effect on p21 or Rb expression.

Total RNA extraction, complementary DNA (cDNA) synthesis, and qPCR were performed as described previously [15]. Total mRNA was extracted from NCI-H446 cells using an RNeasy Mini Kit (Qiagen, Valencia, CA) according to the manufacturer’s protocol. The RNA was used to generate first strand cDNA using random primers and Super Script II reverse transcriptase (Invitrogen). Real-time PCR was performed using as SYBR Prime Script RT-PCR Kit (Takara, Dalian). GAPDH expression was detected as an internal control. The first step of the PCR was incubation at 50°C for 2 min and then at 95°C for 10 min. This was followed by 40 cycles of 95°C for 15 s and 60°C for 60 s in a Mx4000 system from Stratagene (La Jolla, CA). The primer sequences of qPCR are shown in Table 1.

NCI-H446 cells were seeded into a 96-well plate and incubated for 24 h. The cells were then treated with various concentrations of cisplatin, after which MTT assays were performed. Twenty microliters of 5 mg/ml MTT in PBS were added to each well and incubated for 4 h at 37°C. The formazan crystals formed were dissolved in 200 μl of DMSO, and the optical density of the solution at 570 nm (OD570) was determined. Each assay was performed three times, and the average results were calculated.

For cell cycle analysis, aliquots (1×106) of cells were fixed overnight in 70% ethanol at 4°C. The cells were then washed in PBS and stained with propidium iodide (PI; Sigma, Cat. P4170). After 30 min at room temperature in the dark, the cells were filtered through 40 μm diameter mesh to remove clumps of nuclei. Flow cytometry (BD FACS Aria, Becton Dickinson) was the used to identify cells in the sub-G1, G0-G1, S or G2-M phases. The sub-G1 nuclei in the populations were deemed apoptotic.

Cells were injected subcutaneously into the left back of six-week-old BALB/c nude mice at 1×106cells/injection site. At the end of 4 weeks, mice were sacrificed. The weight and volume of the tumor was detected.

All data were expressed as the mean ± SEM from at least three separate experiments. Data were analyzed using ANOVA for comparisons among multiple groups or using Student t-test for comparison between two groups. All analyses were performed using the Microsoft Excel Analysis Tool Pak (Microsoft, Redmond, WA). Values of P<0.05 were considered significant.