Background: MicroRNAs (miRNAs) are small non-coding RNA molecules, which participate in diverse biological processes and may regulate tumor suppressor genes or oncogenes. Rs11614913 in miR-196a2 and rs3746444 in miR-499 are shown to associate with increased/decreased cancer risk. This meta-analysis was performed to systematically assess the overall association.

Results: We assessed published studies of the association between these microRNA polymorphisms and cancer risk from 56 studies with 21958/26436 cases/controls for miR-196a2 and from 37 studies with 13759/17946 cases/controls for miR-499. The results demonstrated that miR-196a2 rs11614913 was significantly associated with a decreased cancer risk, in particular with a decreased risk for colorectal cancer and gastric cancer, or for Asian population subgroup. In addition, miR-499 rs3746444 polymorphism was observed as a risk factor for cancers, in particular, for breast cancer, or for in the Asian population.

Conclusions: Our meta-analysis suggests that the rs11614913 most likely contributes to decreased susceptibility to cancer, especially in Asians and colorectal cancer and gastric cancer, and that the rs3746444 may increase risk for cancer. Furthermore, more well-designed studies with large sample size are still necessary to further elucidate the association between polymorphisms and different kinds of cancers risk.

Cancer is reportedly one of the major causes of death among human worldwide [1]. According to GLOBOCAN 2012 report, there were 14.1 million new cases and 8.2 million deaths in 2012 [2]. Recently reported, as a very complex genetic disease, the mechanism of cancer has not been completely elucidated. Moreover, studies have suggested that cancer development results from gene-environment interactions [3].

MicroRNAs (miRNAs) are a class of endogenous small single-stranded, long non-coding RNA molecules, which play critical roles in a extensive range of biologic and pathologic processes, especially in carcinogenesis [4–5]. Accumulating studies indicates that a single miRNA cantarget 200 genes, and approximately 20% of human genes are regulated by the mature miRNA molecules [6]. More than half of miRNAs genes are located in cancer-related genomic regions, indicating that these miRNAs may play a more important key role in the etiology, tumorigenesis, development and prognosis of human cancers than previous research [7].

Single nucleotide polymorphisms (SNPs) occurring in the miRNA gene region may influence the function of specific miRNA molecules and the genetic variation, which are associated with cancer susceptibility through altering miRNA molecules expression [8–9]. Recently, miR-196a2C.T (rs11614913) and miR-499 A.G (rs3746444) have been reported to demonstrate the association with malignant tumors susceptibility [10–17]. For instance, Min et al. [11] demonstrates that the miRNA variants could affect the development of colorectal cancer in the Korean, while Georgeh et al. [17]. showed miR-196a2C.T (rs11614913)and miR-499 A.G (rs3746444) revealed significant risk for developing prostate cancer in North Indian. However, the consequences of these relevant studies remain incomprehensive and controversial. To the best of our knowledge, there is no systematic and comprehensive reports or studies regarding the impact of miR196a2 and miR-499 variants on overall cancer risk in world wide population. Hence, we performed a meta-analysis to clarify the associaton between the miR-196a2C.T (rs11614913)and miR-499 A.G (rs3746444) polymorphisms with cancer susceptibility.

We carried out a search in PubMed, ISI Web of Knowledge, EMBASE, Chinese National Knowledge Infrastructure(CNKI) databases for all relevant reports using the key words “microRNA 192” OR “microRNA-192” OR “miR-192” OR “rs11614913” OR “microRNA 499” OR “microRNA-499” OR “miR-499” OR “ rs3746444”) AND (“polymorphism” OR “SNP” OR “variation” OR “locus” OR “mutation”) AND (“cancer” OR “tumor” OR “malignancy” OR “carcinoma” OR “neoplasm”(updated to Dec 30, 2016). The search was limited to English language papers and human subject studies. We evaluated potentially relevant publications by examining their titles and abstracts, thereafter all studies matching the eligible inclusion criteria were retrieved.

The following criteria were used to select studies for further meta-analysis: (a) about the miR-196a2 rs11614913/miR-499 rs3746444 polymorphisms and cancer risk, (b) full-text study, (c) from a case-control designed study, (d) genotype frequencies available, (e) sufficient published data for estimating an odds ratio (OR) with 95% confidence interval (CI).

Accordingly, the following exclusion criteria were also used: (a) the design of the experiments were not case-control studies; (b) the source of cases and controls, and other essential information were not provided; (c) reviews and duplicated publications.

All data were independently abstracted in duplicate by two investigators (Yan and Zhang) using a standard protocol and data-collection form according to the inclusion criteria listed above. The following information was sought from each publication: the first author’s name, year of publication, country of origin, ethnicity, cancer type, source of control (population- or hospital-based controls), genotyping method and number of cases and controls miR-196a2 C/T and/or miR-499 G/A genotypes, respectively (Table 1). Different ethnicity descents were categorized as Caucasian and Asian.

Statistical heterogeneity between studies was checked by Cocharan’s chi-square based Q-test [18] and quantified by I2. If the P-value for heterogeneity was < 0.05, or if I2 was ≥ 50%, indicating substantial heterogeneity among studies, then a random-effect model using the DerSimonian and Laird method [31], which yielded wider CIs, was chosen to calculate the pooled OR; otherwise, a fixed-effect model using the Mantel-Haenszel method [19] was used. One-way sensitivity analyses were performed to assess the stability of the meta-analysis results [20]. Potential publication bias was estimated using Egger’s linear regression test by visual inspection of the Funnel plot. All P value < 0.05 was used as an indication of potential publication bias [21].

All statistical analyses were carried out with the review manager version 5.2 (Revman; The Cochrane Collaboration, Oxford, UK). All P values in the meta-analysis were two-sided, and P value less than 0.05 were considered significant.

In total, 462 published studies were obtained though literature search, including the PubMed, EMBASE and CNKI database. Under conditions prescribed by the inclusion and exclusion criteria, 122 eligible studies (Figure 1) were retrieved, because they were no detailed evaluation. During data extraction, 62 eligible studies [22–83] were leaved, in which 56 and 37 studies were pooled for our meta-analysis, respectively (Figure 1). The characteristics of these selected studies are summarized in Table 1. Among all the included studies, there were 13 studies (hepatocellular cancer), 12 studies (breast), 7 studies (gastric), 6 studies (colorectal), 4 studies (lung), and 20 studies (other cancer types), and one (breast/ovarian cancer). There were 48 studies of Asian population, 14 studies of Caucasian population. Generally speaking, 56 studies included in our meta-analysis with 21958 cases and 26436 controls, which were ultimately analyzed for miR-196a2C.T (rs11614913), 37 studies including 13759 cases and 17946 controls for miR-499 A.G(rs3746444) . 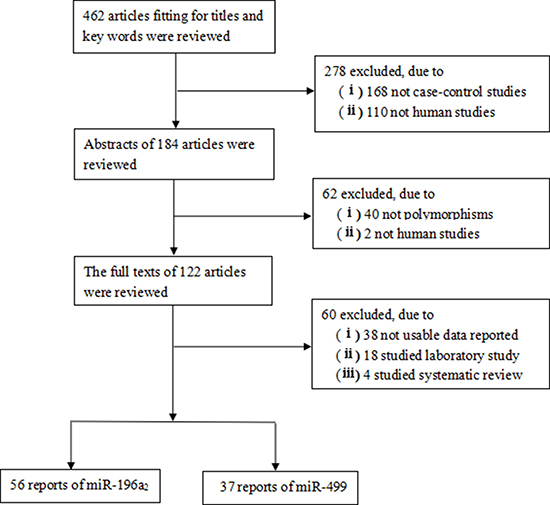 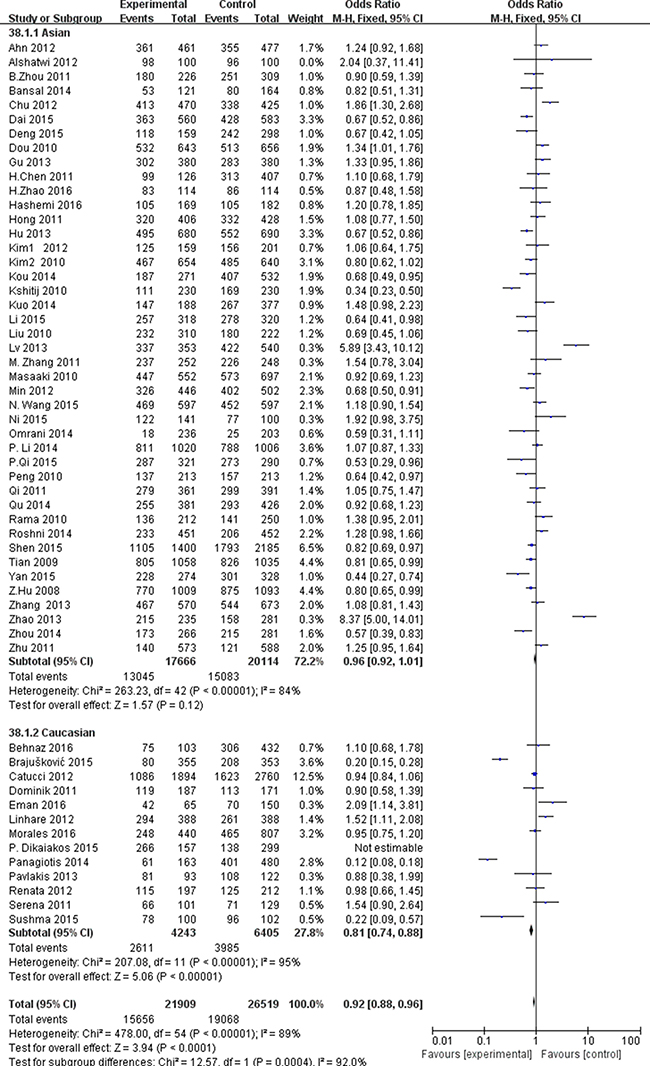 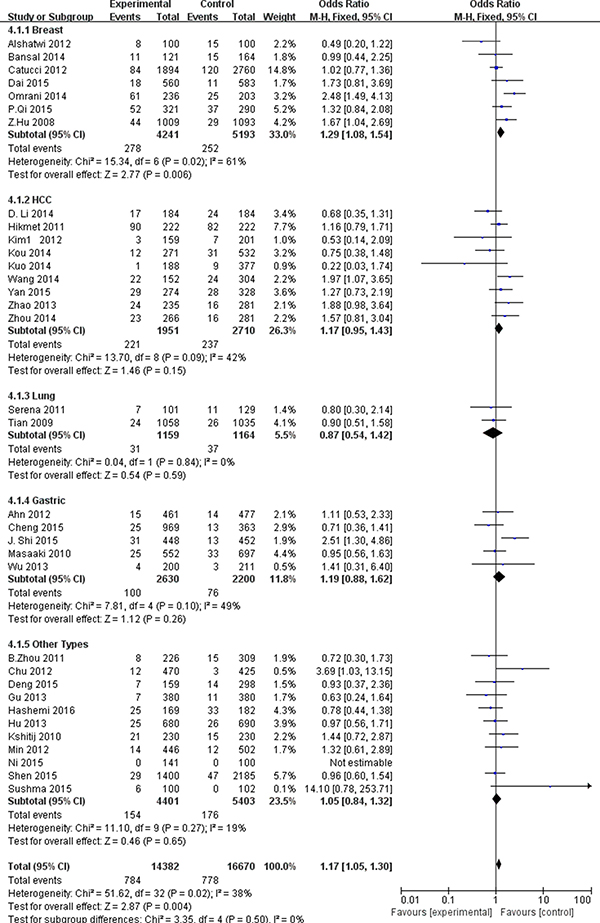 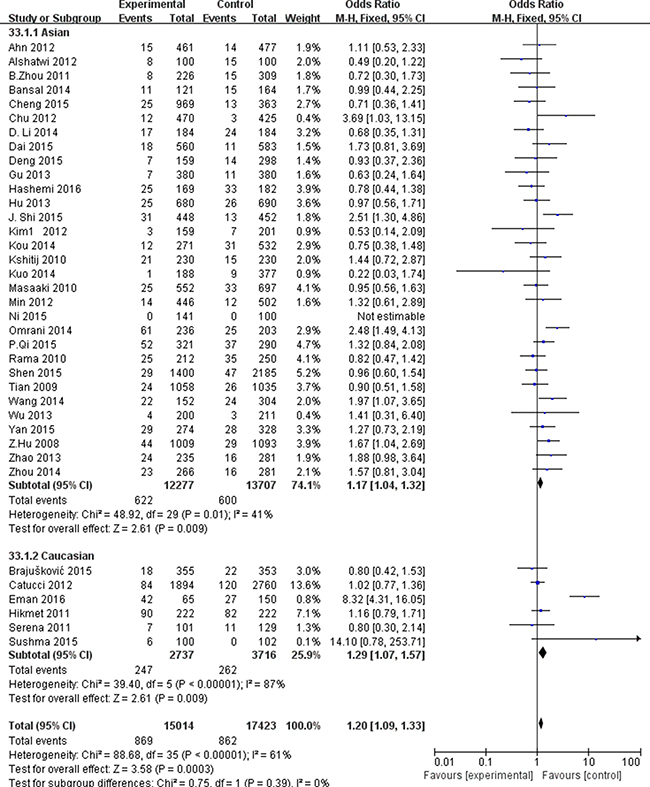 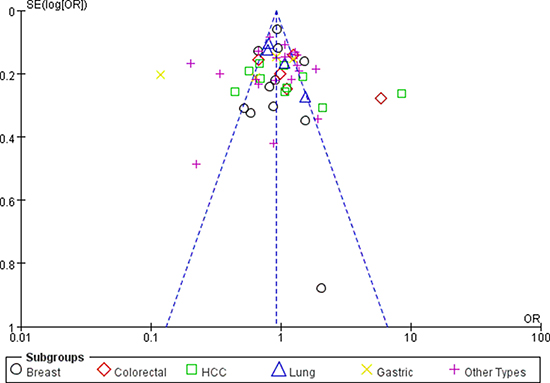 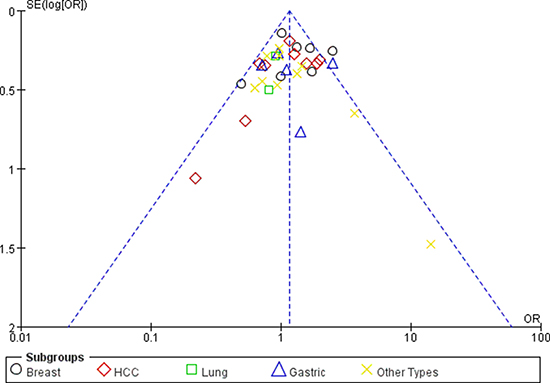 The most common form of genetic sequence variation, SNPs are affecting miRNAs sequence coding, splicing and expression such as miRNA gene in human genome, which can affect the susceptibility of cancer including Asian and Caucasian [83]. It was detected in much previous research effort that the role of SNPs is located in miRNA sequence of miR-196a2 C.T (rs11614913) and miR-499 A.G (rs3746444) and influences on the progression of cancers [84]. Recently, several studies have investigated genetic variants of the miRNA SNPs in cancer susceptibility, but conclusions of those studies remain inconclusive. In this study, we conducted a meta-analysis to evaluated the association between the overall cancers susceptibility and the two polymorphisms in miRNA (miR-196a2 C.T rs11614913, miR-499 A.G rs3746444).

For miR-196a2 C.T rs11614913 polymorphism, although previous studies have revealed no association between cancer susceptibility and the expression of miR-196a2 rs11614913 [85–86]. Recently, the results of these meta-analysis studies have indicated a significant association between cancers susceptibility and miR-196a2 C.T rs11614913 [87–92]. The SNPs of miR-196a2 have caused increasing attention because they influence on the maturation progression and mutation of miRNA, and they play potential roles in tumor development and progression(cell proliferation, differentiation, apoptosis, migration and invasion). The predecessor found that the genetic sequence variation in miR-196a2 C.T rs11614913 is located in the 3′ passenger (3p) mature sequence of miR-196a2, and this functional polymorphism is reportedly associated with the susceptibility of multiple kind of tumors (lung cancer and breast cancer). However, there was lower survival rates in small cell lung cancer, gliomas, gastric cancer, gallbladder, head and neck, esophageal, and HCC . During this interim of more than one year, some relevant case-control studies have been published, while conclusions of the relevant studies remain incomprehensive and inconsistent. For example, Dai et al. [32] results revealed that the miR-499 A.G rs3746444 polymorphisms are related to increased risks of breast cancer, while the miR-196a2 C.T rs11614913 polymorphisms are connected with reduced risks of breast cancer. Wei’s studies [93] suggested that the miR-196a2 C.T rs11614913 might not be connected with susceptibility to gastric cancer, while our study revealed that the miR-196a2 C.T rs11614913 decrease risks to cancer, especially colorectal and gastric cancer in Asians population, and that the miR-499A.G rs3746444 may increase risks of cancer. In subgroup analysis by cancer type, ours results indicate that significant association with risks of cancer was observed in colorectal, gastric and lung cancer. But we did not detect significant association in breast cancer. While Christensen et al. [94] showed the miR-196a2C.T rs11614913 may reduced incidence of breast cancer. In subgroup analysis according to ethnicity, we found the significant association with risks of cancer in Asian population, indicating a possible role of differences in genetic backgrounds between Asians and Caucasians.

As for miR-499A.G rs3746444 polymorphism, the pooled results studies revealed that the miR-499A.G rs3746444 was association with risks of cancer in multiple types of cancer [95–97]. Several studies showed that a large amount of miRNAs are abnormally expressed in various cancers, and Zhang et al. [98] found that approximately 50% miRNA genes are located in cancer-associated regions, so miRNAs possibly exert a signifcant effect on the tumorigenesis. It was reported that studies have shown that the miR-499 rs3746444 can regulate the expression of SOX genes. The over-expression of SOX6 could reverse the anti-apoptosis effects of miR-499 A.G rs3746444 [99]. The abnormal expression of SOX genes can activate Wnt/β-catenin signaling pathway, which is associated with tumorigenesis and progression, so miR-499 A.G rs3746444 may play a decisive role in the occurring of cancer by altering SOX genes’ expression level. Moreover, the mate-analysis results from 37 studies revealed that the miR-499 rs3746444 G allele was revealed as a risk factor for cancers, in particular, for breast cancer or for in the Asian, which consistent with Hu’s results [100]. Therefore, The results illustrated that cancer types and district classification could cause different effects between miR-499 A.G rs3746444 polymorphism and risks of cancer.

To our knowledge, the source of the heterogeneity, including miR-196a2 C.T rs11614913 and miR-499A.G rs3746444, were mainly results from different ethnicity, different cancer types, different source of controls, different selection of subjects and sample size. Therefore, we evaluated the source of heterogeneity by cancer types, ethnicity, different selection of subjects and sample size. Nevertheless, our meta-analysis indeed exist some boundedness. Firstly, lack of relevant published data from the collected studies of potential gene-to-gene and gene-to-environment interactions, which may adjust risks of cancer. Secondly, potential heterogeneity was detected in some comparison, because they are unavoidable. Finally, publication bias existed in studies.

In conclusion, our meta-analysis indicated that the miR-196a2 C.T rs11614913 is significantly associated with a decreased risk of cancers, especially in the subgroup of colorectal, lung and gastric cancer, or Asians. Contrary to the above, the miR-499A.G rs3746444 most likely contributes to increased susceptibility of cancer in overall population, especially in breast cancer. Furthermore, more well-designed researches with large sample size are still necessary to elucidate the correlation between polymorphisms and different kinds of cancers risk.

The authors have no conflicts of interest in this work.

This study was supported by National Natural Science Foundation, People’s Republic of China (No. 81274136) and Program for New Century Excellent Talents in University of China (No. NCET-110439).

20. Tobias A. Assessing the influence of a single study in the meta-analysis estimate. Stata Technical Bulletin. 1999; 15–17.