The plasmid-encoded colistin resistance gene (mcr-1) has recently been reported in various Gram-negative species. However, the expression profile of mcr-1 remains unknown. Here, we investigated the expression of mcr-1 in various plasmids and bacteria. The mcr-1 expression levels in pMCR1_IncX4 varied from 1.81 × 10–5 to 1.05 × 10–4 (pmol per μg total RNA) in the two K. pneumoniae strains SZ03 and SZ04 (ST25) and the two E. coli strains SZ01 and CDA6 (ST2448 and ST167, respectively). The mcr-1 expression levels of pMCR1_IncI2 in E. coli SZ02 (ST2085) and E. coli BJ13 (ST457) were 5.27 × 10–5 and 2.58 × 10–5, respectively. In addition, the expression of chromosomal mcr-1 in ST156 E. coli BJ10 was 5.49×10–5. Interestingly, after 4μg/ml colistin treatment, mcr-1 in pMCR1_IncX4 increased 2- and 4-fold at 20 and 120 mins, respectively, in all pMCR1_IncX4-harboring strains, except for ST2448 E. coli, which had a lower expression after 20 mins that restored to baseline levels after 120 mins. In contrast, mcr-1 expression of pMCR1_IncI2 in the two E. coli strains (SZ02, BJ13) and the chromosomal mcr-1 in E. coli (BJ10) remained at baseline levels after 20 and 120 mins. In the same genetic background host strain E. coli E600, mcr-1 expression of pMCR1_IncX4 and pMCR1_IncI2 were similar and were decreased after colistin treatment for 20 min. However, mcr-1 in pMCR1_IncX4 was up-regulated after colistin treatment for 120 min, while mcr-1 in pMCR1_IncI2 was down-regulated compared to the untreated control. Our results suggested that mcr-1 has distinct expression profiles on different plasmids, bacterial hosts, and after antibiotic treatment.

Multidrug-resistant Gram-negative bacteria, particularly carbapenem-resistant Enterobacteriaceae (CRE), have spread globally into hospitals and communities, and thus have become a significant public health concern [1, 2]. For clinical infections caused by CRE, the treatment options are limited and the polymixins (colistin and polymyxin B) are the last-resort antibiotic. The recent identification of a plasmid-encoded polymyxin resistance mechanism (MCR-1) in Enterobacteriaceae from both human and animal samples suggests that this last-resort antibiotic may be under jeopardy [3, 4]. To date, mcr-1-harboring plasmids have been identified in a number of countries with a wide geographical distribution, and some MCR-1 producing strains were resistant to multiple antibiotics [5, 6].

Polymyxin resistance is the result of a 4′-phosphoethanolamine (PEA) or 4-amino-4-deoxy-L-arabinose (L-Arap4N) modification of bacterial lipid A, which is a component of the lipopolysaccharide (LPS), and results in a reduction in polymyxin affinity. Resistance is usually chromosomally mediated and involves modulation of two-component regulatory systems (e.g., pmrAB, phoPQ, and its negative regulator mgrB in Klebsiella pneumoniae) [7, 8]. The plasmid-transferrable mobilized colistin resistance gene mcr-1, encoding a novel PEA-transferase [3, 4], is able to mediate a PEA addition to the lipid A moiety at the 4′-phosphate group, thereby causing colistin resistance. So far, gene expression and transcriptomic analyses of chromosomal colistin resistance genes have been reported frequently. In contrast, the number of studies on gene regulation of mcr-1 is limited, since most of the mcr-1 studies have been focusing on epidemiological investigations of mcr-1 in different Enterobacteriaceae, including Escherichia coli, Salmonella enterica, K. pneumonia, Enterobacter aerogenes and Enterobacter cloacae [9–11].

Different incompatibility (InC) groups of plasmids have been found to carry mcr-1, while among them the IncI2 and IncX4 plasmids were most commonly reported. In the previous studies, we completely sequenced mcr-1-harboring plasmids pMCR1_IncX4 and pMCR1_IncI2 from clinical K. pneumoniae and E. coli strains [12]. In addition, we genomically characterized one of the first chromosomally encoded mcr-1 genes from an E. coli (BJ10) isolate [13]. In this study, we used quantitative reverse transcription PCR (qRT-PCR) to evaluate the expressions of mcr-1 of different plasmids (pMCR1_IncX4 and pMCR1_IncI2) within different species (E. coli and K. pneumoniae) and their changes in response to colistin challenge.

Analysis of the mcr-1 locus and its promoter

Figure 1: Schematic map of the different mcr-1- bearing plasmids pMCR1_IncX4 and pMCR1_IncI2. (A) Model of mcr-1 locus. (B) Analyses of mcr-1 promoter. S, transcription start site; M, methionine and translation initiation site; The mcr-1 promoter sequences are indicated with the corresponding -10 and -35 boxes being underlined according to Poirel L’s work.

As shown in Figure 2, mcr-1 expressions in pMCR1_IncX4 varied from 1.81 × 10–5 to 1.05 × 10–4 (pmol per μg total RNA) in the two ST25 K. pneumoniae strains SZ03 and SZ04, and the two E. coli strains CDA6 and SZ01 (ST167 and ST2448, respectively), with the ST167 E. coli strain CDA6 showing the highest expression levels. The mcr-1 expression of pMCR1_IncI2 in the ST2085 E. coli strain SZ02 and ST457 E. coli strain BJ13 was 5.27 × 10–5 and 2.58 × 10–5, respectively. In addition, the expression of chromosomal mcr-1 (with ISApl1 inserted in the two flanking regions) in the ST156 E. coli strain BJ10 was 5.49 × 10–5. Our results showed that mcr-1 expression from the same plasmid may vary significantly when expressed in the different genetic backgrounds of the different strains. In addition, we investigated the MICs for colistin in these mcr-1 positive parental strains (Table 1) and found that the MICs for colistin were not consistent with the differences in expression of mcr-1 in these strains. These results suggest that colistin resistance not solely depends on the expression levels of mcr-1 and the structural modification of lipid A mediated by mcr-1 [15]. 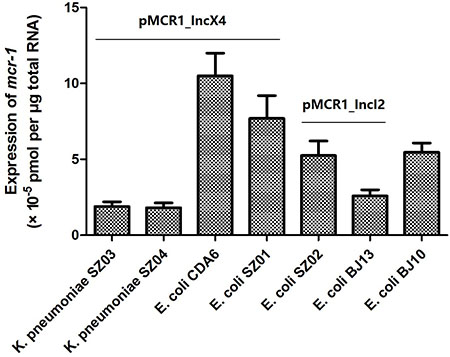 Figure 2: The mcr-1 expression of plasmids pMCR1_IncX4 and pMCR1_IncI2 in parental strains. Bacteria were grown to an OD600 of 0.5 and total RNA were extracted and subsequently used to do the qRT-PCR experiments. The data were analyzed by using Student’s t-test and shown as Mean with SEM.

Table 1: Strains and plasmids tested in this study 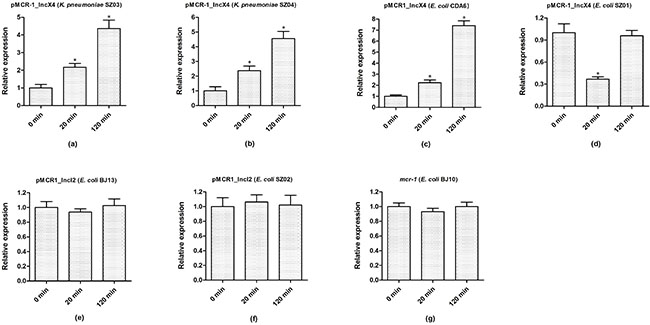 Figure 3: The expression dynamics of mcr-1 in parental strains under colistin treatment for different time. Bacteria were grown to an OD600 of 0.5, and then colistin was added into the cultures with the final concentration of 4 μg/ml. After 20 mins and 120 mins treatment by colistin, bacterial total RNA were isolated and subsequently used to do the qRT-PCR experiments. The data were analyzed by using Student’s t-test and shown as Mean with SEM. *P < 0.05 (compared to 0 mins treatment by colistin).

Expression of mcr-1 in E. coli E600 after colistin treatment for different times 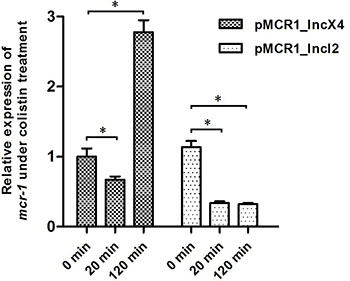 Figure 4: The mcr-1 expression of plasmids pMCR1_IncX4 and pMCR1_IncI2 in same host strain E. coli E600 under colistin treatment for different time. Bacteria were grown to an OD600 of 0.5, and then colistin was added into the cultures with the final concentration of 4 μg/ml. After 20 mins and 120 mins treatment by colistin, bacterial total RNA were isolated and subsequently used to do the qRT-PCR experiments. The data were analyzed by using Student’s t-test and shown as Mean with SEM. *P < 0.05 (compared to 0 mins treatment by colistin).

Colistin is a cationic polypeptide antibiotic which is regarded as one of the last antibacterial agents against CRE. In general, colistin resistance of Gram-negative bacteria like Klebsiella, E. coli and Salmonella enterica has been mediated by chromosomal mutations and was thought to be non-transferable. The emergence of colistin resistance mediated by the mcr-1 gene on a plasmid has become a matter of major concern since its first report in China. To date, the mcr-1 gene has been detected in Enterobacteriaceae from almost 35 countries all of the world, including E. coli, E. aerogenes, E. cloacae, K. pneumonia, Shigella sonnei and S. enterica [16–19]. A number of different plasmids including the most common, IncI2 and IncX4, have been associated with the spread of mcr-1. Recently, Wang et al. described over 10 mcr-1-harboring plasmids with diversified incompatibility in E. coli [20], and reported that the mcr-1 promoter of different origins exhibits similar activity through transcriptional analyses [21]. However, the mechanism of mcr-1 gene regulation is still unclear.

After treatment withcolistin, various mcr-1 expression patterns of mcr-1-harboring plasmids from different bacterial hosts were detected, and we suspect that the differential expression changes may be due to the differences in bacterial backgrounds and/or the different mcr-1-harboirng plasmids. Moreover, we found that different plasmids had similar baseline mcr-1 expression within the same E. coli E600 strain, suggestin that the expression of mcr-1 from different plasmids is likely controlled by the host genetic background without colistin challenge. However, after colistin treatment, both the host bacteria and the mcr-1-harboring plasmids may contribute to mcr-1 gene expression regulation, therefore a complex regulation network of mcr-1 may be involved.

Taken together, this is one of the first studies focusing on the expression characteristics of mcr-1 from different plasmids and in different bacterial host backgrounds. It is suggested that different genetic signatures on the plasmids or in the bacterial strains may contribute to the observed variations, which warrant further investigations. Therefore, this study laid the foundation for further research on the regulation mechanism of mcr-1 expression.

Seven mcr-1 positive clinical isolates are used in this study, including two K. pneumoniae strains and five E. coli strains. All the bacterial strains used in this study are listed in Table 1. Minimal inhibitory concentrations (MICs) of colistin were determined using the agar dilution method and E. coli strain ATCC 25922 was used as a quality control strain.

Expression of mcr-1 investigated by qRT-PCR

Full length mcr-1 from pMCR1_IncX4 was cloned into a T-vector in E. coli DH5α, and this recombinant T-vector was used as the standard for quantitative reverse transcription PCR (qRT-PCR). The absolute expression levels of mcr-1 of the pMCR1_IncX4 and pMCR1_IncI2 plasmids in their parental K. pneumoniae and E. coli isolates (Table 1) were investigated by qRT-PCR. In addition, the plasmid pMCR1_IncX4 and pMCR1_IncI2 were transferred into E. coli E600 via conjugation, and their transconjugants were evaluated by qRT-PCR. Moreover, the mcr-1 chromosomally integrated E. coli (BJ10) was included in the tests [13].

In the qRT-PCR experiments, the forward primer sequence for mcr-1 was AAATCAGCCAAACCTATCCC, and reverses primer sequence was CGTATCATAGACCGT GCCAT. The housekeeping genes rpoD and gapA were used for normalization for E. coli and K. pneumoniae, respectively. All the strains were cultured overnight at 37°C with shaking (250 rpm) in 1 ml LB broth, and then 1:100 diluted into 10 ml fresh medium. Cultures were incubated to exponential growth (OD 0.5 at 600 nm) and total RNA was extracted using an RNeasy kit (Qiagen, Germany) according to the manufacturer’s instructions. Extracted RNA was treated with 1 U of RNase-free DNase I at 37°C for 10 min to remove traces of DNA and incubated at 85°C for 15 min to inactivate the DNase. Subsequently, 1 μg total RNA was subjected to qRT-PCR as described previously [23]. Each experiment was performed with three RNA samples from three independent experiments. Differences between the two groups were assessed by Student’s t-test, P < 0.01 was considered to be statistically significant.

To describe the expression dynamics of mcr-1 under colistin treatment, mcr-1 positive strains were cultured to exponential growth (OD 0.5 at 600 nm), and then colistin was added into the cultures with a final concentration of 4 μg/ml. After 20 mins and 120 mins treatment with colistin, bacterial total RNA were isolated and subsequently used to do the qRT-PCR experiments as above.