Obstructive jaundice is a clinical syndrome related to bile cholestasis and is governed by complex signals [1–3]. While historically studied by researching the obstructive jaundice, inputs from the “jaundiced live” and cholestasis impact many functional conditions [4–6]. Indeed, emerging data suggest that significant progress has been made in understanding the communication between the cholestatic liver diseases and spinal cord in jaundice regulation [7–10]. The spinal cord is well known to be a complex community of specific genes and long noncoding RNAs (lncRNAs) [11–13] that profoundly influence many aspects of occurrence and development for pathologic disorders [14–20], including development of the jaundice regulation. Though there are various studies in clinical disorders by obstructive jaundice, its differential gene and lncRNA expression pattern in the thoracic spinal cord remains unknown.

The introduction of high-throughput RNA sequencing (RNA-seq), where thousands of differential genes and lncRNA expression patterns can be studied in parallel [21–24], permits a broad assessment for altered expression of differential gene and lncRNA in the lower thoracic spinal cord on different time courses of obstructive jaundice model. In current study, we performed a comprehensive transcriptome analysis in obstructive jaundice model using RNA-seq, and identified lncRNAs with differential expression. To explore the function of lncRNAs, we predicted their potential targets with cis-regulatory effects, which were then put into gene ontology (GO) and Kyoto Encyclopedia of Genes and Genomes (KEGG) for further analysis. In addition, we compared the expression of some lncRNAs in thoracic spinal cord at different time points in obstructive jaundice model.

We observed the general appearance of the animals used in this study (Figure 1), and found that rats in BDL group showed yellow ears (D), liver tissue(E) and rear claw(F) 28 days after surgery compared to control group (A, B, C). Otherwise, our results showed that the serum total bilirubin levels was significantly higher in the BDL group (112.8±12.88μml/L) than in the control group (0.45±0.06μml/L) (Figure 1G). 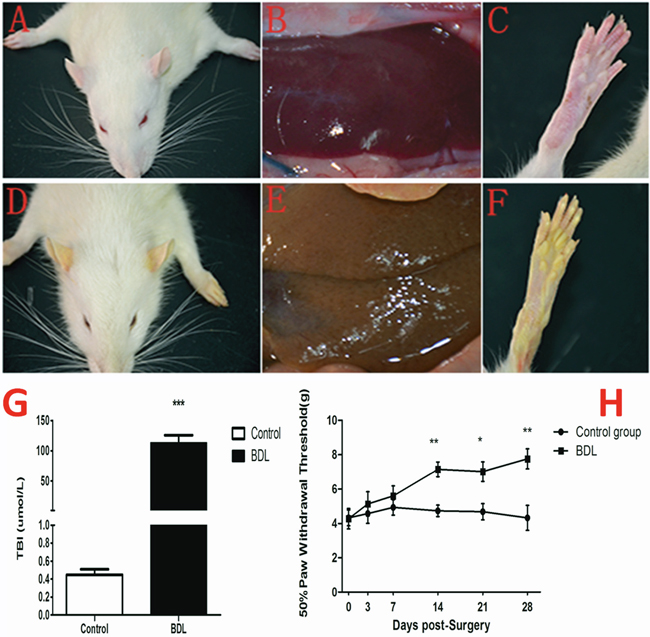 To systematically identify jaundice-associated lncRNAs in spinal cord, the differential expression analysis was performed between BDL group and control group. The lncRNA and mRNA expressions of T6-T12 spinal cord of the animals were examined the HiSeq 2000 system (Illumina, Inc.) with a total of 1,198,903,526 raw reads from the nine libraries. Differentially expressed gene profiles in BDL group were compared to the corresponding data from control group. Figure 2 indicated the scatter plot comparing global mRNA (A) gene expression profiles in the spinal cord between BDL group (Model group) and sham group (Control group), and heat map showing hierarchical clustering of overall mRNA (B) expression pattern of reliably measured probe sets. In addition, heat map also showed hierarchical clustering of mRNA (C), whose expression changes were more than twofold. 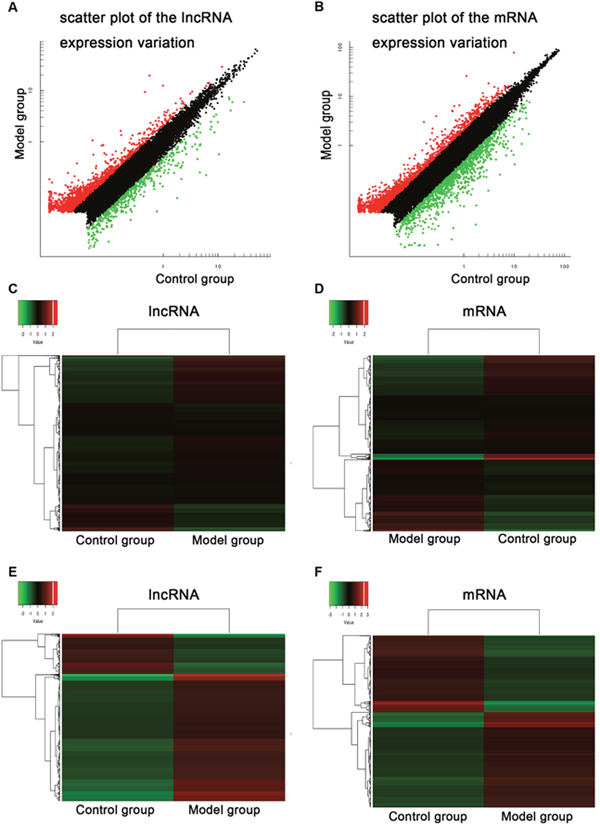 Table 1: The detail information of the top 20 up-regulated and 20 down-regulated lncRNAs

Table 2: The detail information of the top 20 up-regulated and 20 down-regulated mRNAs 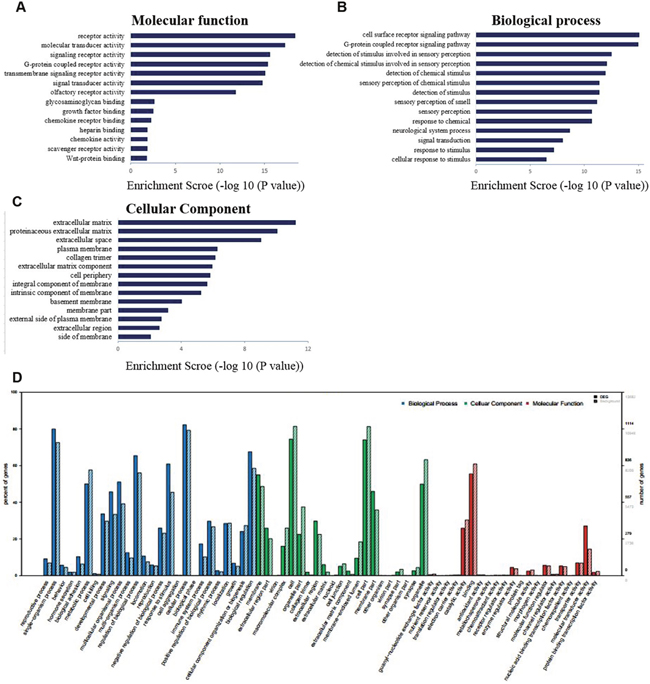 Validation of the lncRNAs by RT-qPCR 28d after BDL operation 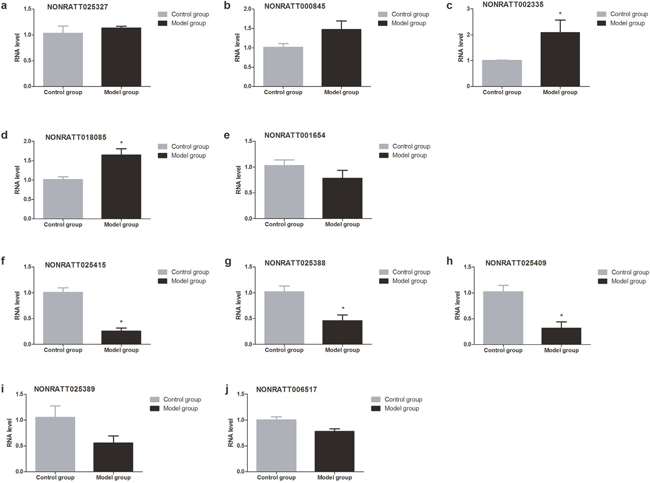 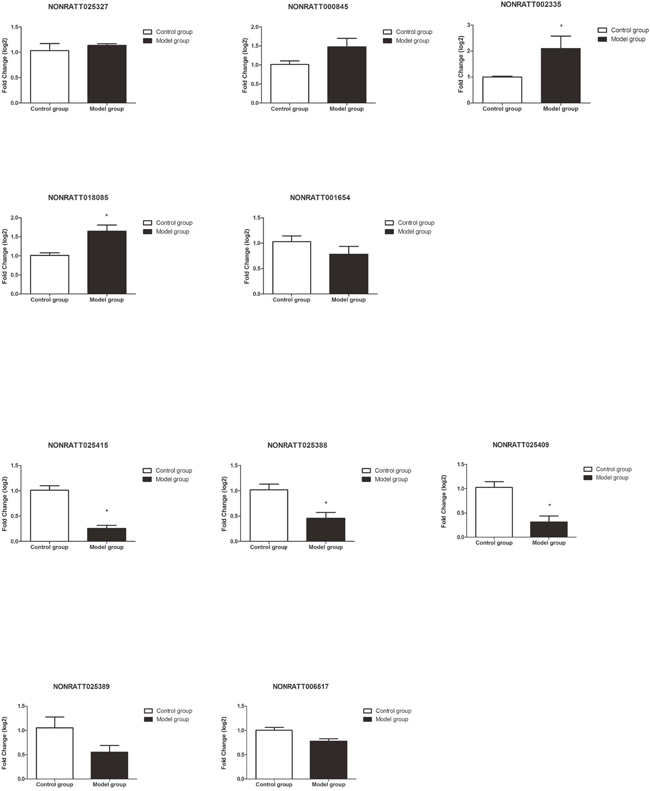 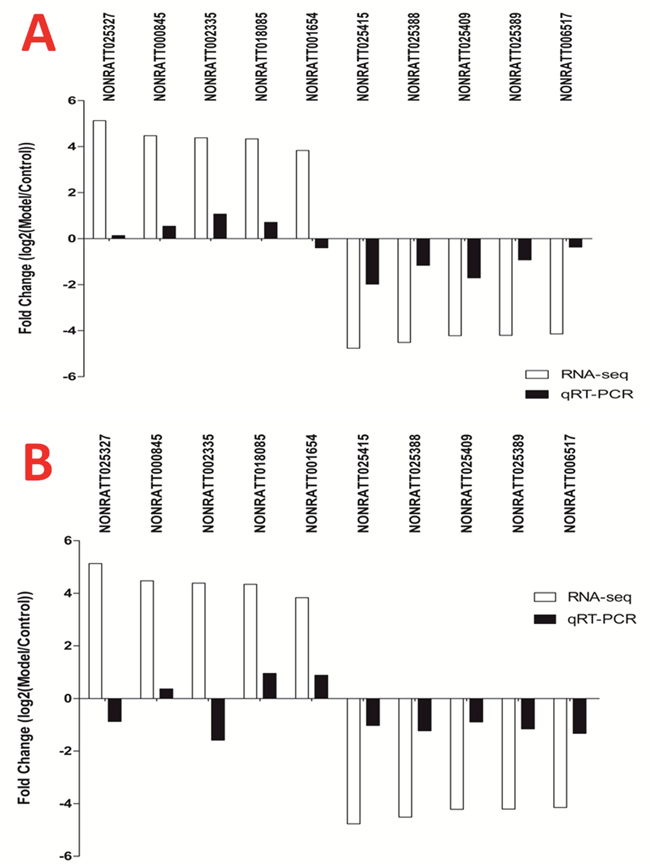 In the present study, we confirmed that bile duct ligation resulted in obstructive cholestasis and jaundice and this model was consistent with previous reports describing marked elevation of the serum total bilirubin in rats responding to bile duct ligation [5, 25]. In addition, our result also indicated that obstructive jaundice induced the decreased sensitivity in response to the mechanical nociceptive stimulation 14d and 28d after BDL operation, which was in line with a previous experimental study showing that obstructive cholestasis by bile duct resection in rodents displayed decreased nociception [26–28].

Previous studies have suggested that the different duration of cholestasis accompanies by some behavioral change in rodents [26, 30]. Belghiti et al observed that chronic BDL rats displayed enhanced scratching behavior and thermal hyperalgesia already 48 h after BDL surgery, and this result was perfectly demonstrated by the up-regulation and sensitization of the heat-sensitive TRPV1 channel [30]. Tian et al also demonstrated 5-HT-induced enhanced scratching and antinociception to mechanical and heat stimuli in BDL rats [31], suggesting that targeting 5-HT receptors may be an effective treatment for cholestatic itch. In this study, we found differential expression of some lncRNAs (Figure 7) in the spinal cord at different time points (14d/28d) after BDL operation, suggesting that the different lncRNAs in spinal cord segment may be involved in the neuronal response to obstructive jaundice. Although the functions of many lncRNAs in spinal cord are not fully known, our findings provide novel potential insights involving in the molecular mechanism of jaundice-induced altered peripheral nociception.

In conclusion, obstructive jaundice accompanied by altered peripheral nociception is always a crucial factor limiting the therapeutic efficacy of many drugs and quality of life for patients. Here we constructed the expression profiles of lncRNAs and potentially related mRNAs in rats with obstructive jaundice, and found some distinct lncRNA/mRNA expression profiles in spinal cord, suggesting that these unique noncoding transcripts may contribute to the acquisition of cholestasis-induced altered peripheral nociception. Although additional studies are needed to verify these lncRNAs/mRNAs mentioned above, our study provides important insights into novel indicators of treatment for patients with cholestasis.

Male Sprague-Dawley rats were provided by the Center of Experimental Animal of Tongji Medical College (license number: 43004700019962). All experimental protocols, animal testing and surgeries were performed in adherence to the National Institute of Health Guide for the Care and Use of Laboratory Animals (NIH Publications No. 80-23) revised 1996. The experimental protocols were approved by the committee of experimental animals of Tongji Hospital, Tongji Medical College (IRBID:TJ-A0804). The animals were maintained in a climate controlled room on a 12-hlight/dark cycle (light on at 07:00 h). Rats were housed (2/cage), but they were individually caged during each experiment. Food and water were available ad libitum.

Rats were placed in a temperature-controlled chamber before experimental operation. All surgical procedures were performed under sterile conditions. Common bile duct ligation (BDL) established the prolonged obstructive jaundice as described in previous studies [32–34]. After an intraperitoneal injection of ketamine hydrochloride (50 mg/kg) plus xylazine (5 mg/kg), rats which underwent BDL were anesthetized. In those with BDL, the common bile duct was located and ligated using 4-0 silk at two points anterior to the pancreas and posterior to the hilum of the liver. The first ligation was made just above the duodenum and the second almost 2 mm above the first ligation. The bile duct was then transected at the midpoint between the two ligatures. Animals used in this study were sacrificed before signs of severe illness became apparent.

As in previous reports [35–38], mechanical paw withdraw threshold was examined using the blind method with a minimum of six animals/group. Calibrated von Frey filament apparatus (Stoelting, Wood Dale, IL, USA) was used to measure the paw withdrawal response for a mechanical stimulus. A range of filament comprises 1g, 1.4g, 2g, 4g, 6g, 8g, 10g, and 15g bending force. Rats were allowed to acclimate within a clear plastic chamber over an elevated mesh floor for 30 minutes before assessment at room temperature. Each filament was applied to the midplantar surface of the left hind paw until a withdrawal response occurred. To avoid tissue injury in refractory animals, stimulation was automatically terminated after 15 seconds. The interval between adjacent tests was >5 minutes. The results of 3 consecutive measurements were averaged for the mechanical paw withdraw threshold in BDL and control rats.

Library preparation and high-throughput RNA sequencing were performed by the OE Biotechnology Corporation (Shanghai, China) [39–41]. Total RNA of all samples were sequenced by EMBL GeneCore (EMBL Genomics Core Facility, Heidelberg, Germany). The synthesis of polyadenylated transcriptome libraries for every sample was accompanied by deep sequencing in 3 lanes each generating >50 million reads pair end. RNA-seq was performed in the two groups, each with three biological replicates.

Thoracic (T6-T12) segment of spinal cord were dissected and isolated, and total RNA was extracted using TRIzol reagent (Beijing Tiangen Biotech CO.). 6 μg total RNA was used as a template for cDNA synthesis and amplification using the First-Stand Synthesis System (BioPhotometer, Eppendorf, Hamburg, Germany) according to the manufacturer’s instructions [35, 42–45]. The primers were designed with the Primer Express 3.0 software (Applied Biosystems), and the specific forward (F) and reverse (R) primer sequences were in Table 4. Experiments were evaluated in triplicate and repeated at least three times. The threshold cycle (CT) was used to estimate the amount of target mRNA. The comparative CT method with the formula for relative fold-change = 2−ΔΔCT was used to quantify the amplified transcripts.

9. Dawson PA, Karpen SJ. Bile acids reach out to the spinal cord: new insights to the pathogenesis of itch and analgesia in cholestatic liver disease. Hepatology. 2014; 59:1638-1641.

32. Lee E. The effect of obstructive jaundice on the migration of reticulo-endothelial cells and fibroblasts into early experimental granulomata. Br J Surg. 1972; 59:875-877.