Triple negative breast cancer (TNBC) is an aggressive subtype that accounts for 15-20% of cases, with a higher incidence of relapse/death. Even with adjuvant chemotherapy, the 5 year distant metastasis-free survival rate remains low. A total of 452 tumor registry patients with TNBC and no evidence of metastatic disease were identified over the period of 1996-2011. The median age and follow-up time were 51 (range=21-88) and 3.9 (range=0.14-14) years. Approximately 75% of patients with stage III disease received neoadjuvant chemotherapy (NACT) compared with 47% for stage II. Patients with stage I disease predominantly received adjuvant chemotherapy (ACT). Among those who underwent NACT (n=202), 33% had a pathological complete response (pCR). Overall (OS) and disease-free (DFS) survival were significantly longer among patients achieving pCR (versus residual disease) following NACT (OS: all patients P<0.0001, stage II P<0.0001, stage III P=0.0062; DFS: all patients P<0.0001, stage II P=0.0011, stage III P=0.015). ACT was not associated with improved OS or DFS for stage III disease. Adjustment for age, chemotherapy, health insurance type, lymphovascular invasion, race, radiation, and surgery did not alter our results. These findings suggest that pCR following NACT is associated with improved survival among patients with TNBC, independent of diagnostic stage.

Triple negative breast cancer (TNBC) is defined as any breast cancer that does not express the genes for estrogen receptor (ER), progesterone receptor (PR) and human epidermal growth factor receptor 2 (HER-2). It accounts for 15-20% of breast cancer cases, representing ~40,000 new diagnoses each year in the United States [1]. The TNBC phenotype is manifested in 48-70% of breast cancers with the breast cancer (BRCA) gene 1 mutation; however, this phenotype is sporadic and predominantly lacks BRCA mutations [2, 3]. Even though TNBC and the basal subtype often are referred to interchangeably based on complementary deoxyribonucleic acid (cDNA) tissue microarray analysis, there exists about 15-30% discordance between these cancers [4, 5]. At a molecular level, TNBC is an extremely heterogeneous disease [6].

The genomics, natural history and clinical course of TNBC have not been well studied, compared with the better known hormone receptor positive subtypes. TNBC is more sensitive to cytotoxic chemotherapy than receptor positive luminal A breast cancer, yet the prognosis is significantly inferior for this subtype [7]. Currently, no targeted therapy is available for TNBC, owing to the lack of an identifiable receptor.

Earlier trials for resectable breast cancer did not show improved overall (OS) or disease-free (DFS) survival when comparing neoadjuvant (NACT) and adjuvant (ACT) chemotherapy [8–13]. A recent updated report showed that the addition of Taxane and Adriamycin-cyclophosphamide preoperatively improved the pathological complete response (pCR) rate, but no difference was observed for OS or DFS [8]. However, this result contradicts earlier generation studies that showed increased OS and DFS with pCR [14, 15]. These trials were conducted at a time when the molecular heterogeneity of breast cancer was less understood; therefore, it is not well established whether or not NACT provides a superior outcome based on different breast cancer subtypes included in this TNBC cohort.

Subsequent to the above-mentioned trials, several reports regarding TNBC subtype have indicated improved outcomes when pCR is achieved following NACT. These results are comparable with the favorable results observed for luminal A breast cancer. Accordingly, pCR may serve as a suitable surrogate end point when assessing the treatment benefit of the TNBC patient population [16, 17].

In this study of patients with stage I-III TNBC, the aim was to assess the impact of treatment and tumor-related factors on patient outcomes (OS and DFS).

Patients were aged from 21-88 years and were followed for a median of 3.9 years (range=0.14-14) (Table 1). Almost half (48%) of the cohort was black, 51% presented with stage II disease, and 87% had grade 3 tumors. The most commonly used chemotherapy components were anthracycline (63%) or taxane (73%) (Table 2). A small number of patients received other combination chemotherapy including cyclophosphamide, methotrexate and 5 fluorouracil or platinum based regimens.

Effect of timing of chemotherapy and response rate 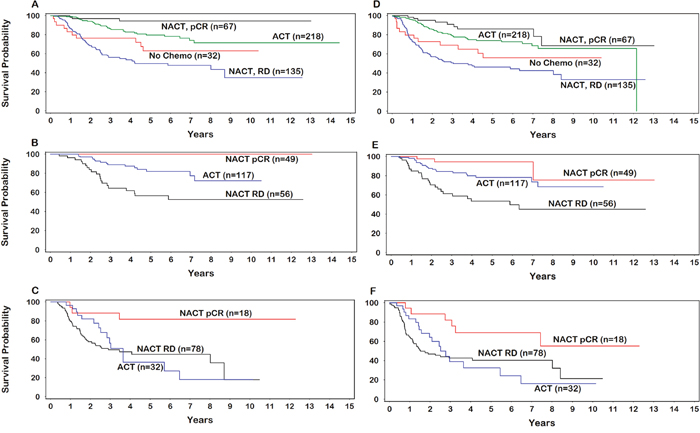 Effect of response to chemotherapy on different stage

In this analysis of TNBC, we comprehensively examined patient demographics, treatment factors, and the effect of timing and response to chemotherapy on survival outcomes, based on different stages of tumor.

Traditionally, NACT has been an acceptable option among patients who are candidates for chemotherapy and prefer organ preservation, based on the National Surgical Adjuvant Breast and Bowel Project (NSABP B-18 and B-27) randomized studies comparing NACT with ACT [8, 9]. Recent studies have shown that while TNBC had higher response rates to chemotherapy compared with hormone receptor positive subgroups, this has not translated into superior survival outcomes [6, 7]. It also has been established for certain aggressive subtypes of breast cancer, including HER-2 (over-expressed) and TNBC, that achieving pCR provides an important surrogate marker for predicting long term clinical response and survival outcomes [16, 17].

In our study, we observed a significant OS and DFS benefit among TNBC patients receiving any systemic therapy/NACT versus no chemotherapy in terms of pCR. The rate of pCR (33%) was similar to that in the literature reported here.

The NSABP B-18 and B-27 clinical trial series has not shown any survival advantage of using NACT over ACT [8, 9]. These studies were performed at a time when breast cancer was not differentiated into subtypes based on their receptor expression and so, it remains unknown whether or not a survival benefit exists for particular subtypes of breast cancers, given their reported heterogeneity. In an attempt to answer this question, a retrospective study of 493 patients with TNBC was conducted to compare outcomes among patients receiving NACT versus ACT [18]. Researchers noted that patients receiving ACT were less likely to die of their disease than patients receiving NACT. This study was limited by a lack of information on the pCR rate following NACT. Based on available data, achieving pCR appears to be a key predictor of improved outcomes in TNBC. Questions remain on how to best integrate systemic therapy, given the increased risk of early dissemination for this disease.

A comparison of pCR rates for operable, locally advanced and inflammatory breast cancer following NACT was assessed in the GeparTrio trial [19]. In univariable analysis, the pCR rate was significantly lower in the inflammatory (8.6%) and advanced groups (11.3%), compared with the operable group (17.7%) (p=0.002). This study did not analyze the impact of pCR on survival among patients with more advanced disease nor did it address different breast cancer subtypes. This study does indicates a lower rate of pCR among patients with more advanced stage disease across the spectrum of breast cancer subtypes. Similarly, we observed a differential response rate of TNBC to NACT based on tumor stage, with less pCR observed among patients with advanced stage cancer. For patients with stage II disease, the pCR rate was 53% versus 19% for stage III disease.

Our study showed a decreasing pCR rate following chemotherapy with advancing tumor stage, which correlated with inferior patient survival. The results are unique as the analysis was limited to TNBC subtype and confirmed the importance of achieving pCR. Our results suggest that with advancing stage, the rate of pCR was lowered proportionately, which may indicate an increase of chemotherapy resistant clones as the tumor grows in size.

Racial and ethnic disparities are widely believed to exist for breast cancer outcomes, with black women reported to have poorer survival than white women [20, 21]. In contrast, no differences were reported in pCR rates, relapse-free survival or OS for TNBC between black and white patients [22]. Our study, which included a large number of black women with TNBC, reported no differences in OS or DFS across race for either univariable or multivariable analysis.

This study has some limitations. Information was not available for patient income, so it is unknown, whether or not health insurance status was an accurate and reliable surrogate measure for socioeconomic status [27]. This study’s observational design led to potential selection bias. Despite this, various demographic and treatment-related factors were included in the MVA to adjust for potential confounding that may have influenced results. The study was strengthen by its large sample size and a high percentage of black patients. Furthermore, differential outcomes were uniquely examined based on the timing of chemotherapy, response rates, and stage of disease.

We conclude that patients who achieved pCR following NACT had superior survival outcomes compared with other patients in this TNBC study cohort. Important differences were observed when our results were stratified by stage. Both superior OS and DFS were seen for patients with stage III disease who experienced pCR following NACT. In contrast, for patients with stage II disease, DFS rates were similar for ACT and pCR following NACT. The adjustment for other outcome related covariates did not significantly alter the findings. These results suggest that novel strategies are needed to improve the rate of pCR in advanced TNBC. More research is needed to differentiate responders to chemotherapy from those who are unlikely to achieve pCR.

A total of 452 tumor registry patients (Central/Eastern North Carolina) with negative ER/PR and HER-2 receptor status and no evidence of metastatic disease were identified over the period of 1996-2011. All cancers were pathologically confirmed. ER or PR was considered negative if the expression was ≤ 1% based on immunohistochemistry (IHC). HER-2 was considered non-expressive based on IHC (0 or 1+) and/or fluorescence in situ hybridization (FISH). Tumor characteristics and patient information were collected from the cancer registry and electronic medical records. Stage was based on pre-treatment clinical and imaging information. Staging was performed according to the American Joint Committee on Cancer (AJCC) – 6th edition guidelines. Grade was based on the modified Nottingham histologic score and divided into grade 1, 2 or 3 (well, moderately, or poorly differentiated). Information on the presence of LVI, treatment parameters (surgery, radiotherapy, chemotherapy) and health insurance status were collected. Surgical treatment was categorized as BCS or mastectomy. Chemotherapy included NACT or ACT. After NACT, pCR was achieved if there was no invasive cancer detected in surgical specimens from breast or lymph nodes. Any invasive cancer in breast or lymph nodes was scored as residual disease (RD). This study received institutional review board approval.

OS time was computed from the date of diagnosis until death or last follow-up. DFS was computed from the date of diagnosis until the date of any failure. Patients were censored if they did not have any event on their last follow-up date. The Kaplan-Meier method was used to estimate OS and DFS. A proportional-hazards regression model was used to estimate hazard ratios (HRs), P-values, and 95% confidence intervals (CIs) for survival time differences. P-values were computed using the score statistic when parameter convergence was not achieved (e.g., no events in one of the comparison groups). All reported P-values were two-sided. The statistical significance level was set at P<0.05. Statistical analysis was performed using SAS v9.4 (Cary, NC). The proportional-hazards assumption was not violated in our analysis [28].

The authors would like to thank Samantha D. Gonzalez for her input in the preparation of this manuscript. Additionally, we acknowledge the assistance of Drs. Sharyn Hunter and Susan Thomas for their comments and advice.

The authors of this publication have no conflicts of interest to disclose.