*These authors contributed equally to the work

#These authors contributed equally to this work and share senior authorship

Enzyme replacement therapy (ERT) has been widely used for the treatment of Fabry disease, a rare X-linked recessive disorder due to absent or reduced activity of lysosomal enzyme α-galactosidase A. It is still unclear why some patients under ERT show disease progression typically with renal, cardiovascular and cerebrovascular dysfunctions. Here, we investigated the involvement of drug absorption, distribution, metabolism, and excretion gene variants in response variability to ERT, genotyping 37 patients with the Affymetrix Drug Metabolizing Enzyme and Transporters (DMET) Plus microarray. We found three single nucleotide polymorphisms in human alcohol dehydrogenase (ADH)4 gene (rs1126670, rs1126671, rs2032349) and one in ADH5 gene (rs2602836) associated with disease progression (p < 0.05). Our data provide a basic tool for identification of patient with ERT non-response risk that may represent a framework for personalized treatment of this rare disease.

Fabry disease (FD, OMIM #301500) is a rare X-linked recessive disorder characterized by the absence or reduced activity of α-galactosidase A (α-GalA). This enzyme deficiency leads to deposition of globotriaosylceramide (Gb3) in body fluids and in the vascular endothelium of many organs [1]. The initial signs and symptoms appear in childhood or adolescence and include angiokeratoma, acroparasthesia, corneal opacities, hypohidrosis and gastrointestinal symptoms [2–5].

However, it has become evident that the removal of stored Gb3 from endothelial cells does not prevent progression of vascular disease in all patients [13], specifically in advanced stage with renal impairment, suggesting a limited success in treatment. Involvement of modulators in the vascular pathophysiology of FD, unrelated to α-GalA and Gb3 accumulation, such as genetic and environmental factors, has been largely investigated. Several studies reported the association of single nucleotide polymorphisms (SNPs) or mutations in inflammatory and coagulation factor genes, such as interleukin 6 (c.−174G>C), endothelial nitric oxide synthase (p.Glu298Asp), the factor V (p.Arg506Gln), and the gene encoding the vitamin-K-dependent protein Z (c.−13A>G, IVS6 + 79G>A), with an increased risk of cerebral lesions and stroke in patients with FD [14–16]. In the present study, we investigated whether, in addition to α-GalA, genetic variants in genes encoding drug absorption, distribution, metabolism, and excretion (ADME) proteins exert some effect on response variability to ERT in a group of 37 FD patients. We compared the genetic profiling of 1936 variants across 231 genes in 28 responders versus 9 non-responders using the Affymetrix Drug Metabolizing Enzyme and Transporters (DMET) Plus platform. 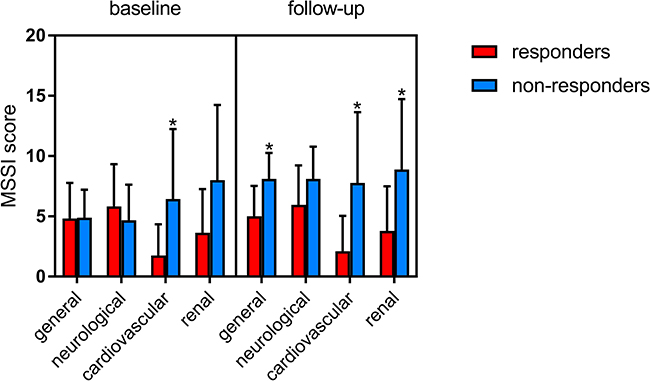 Figure 2: Changes of clinical parameters included in the MSSI score (general, neurological, cardiovascular, renal) among responders and non-responders at baseline and after at least 1 years of ERT (GraphPad Prism v.7). *p ≤ 0.05.

All 37 patients passed QC metrics and produced useable genotypes with an average call rate >95%. Among the 1936 SNPs included in the DMET assay, we used genotyping data from 993 polymorphic SNPs for statistical analysis. The rs953062 in CYP39A1 failed to meet Hardy-Weinberg equilibrium (HWE) and thus was excluded from further analysis. Three SNPs in ADH4 gene (rs1126670, rs1126671, rs2032349) and one in ADH5 (rs2602836) resulted significantly associated with response to ERT (Table 1). The heterozygous genotypes GT (rs1126670), AG (rs1126671) and CT (rs2602836) resulted more frequent in non-responders compared with responders, while the homozygous genotypes CC (rs2032349 and rs2602836) were more frequent in responders. All related genotypes were confirmed with TaqMan SNP genotyping assays.

Table 1: Genotypic distribution of SNPs in ADH4 and ADH5 among responders and non-responders

SNPs were tested for association using Fisher’s exact test. SNPs and genes indicated were limited to those in which p < 0.05. SNP ID* is the SNP identifier based on NCBI dbSNP. *genotypes reported as reverse strand.

ERT has been widely used for the treatment of FD. However, it is still unclear why some patients under ERT progress to renal, cardiovascular and cerebrovascular dysfunctions. Growing evidence is supporting the notion that Gb3 acts as a second messenger inducing oxidative stress and inflammation in FD vasculopathy [17–19]. In this context, Biancini et al. [20] found decreased levels of antioxidant defenses in FD patients while compared to controls: reduced glutathione and glutathione peroxidase activity and increased superoxide dismutase/catalase ratio in erythrocytes. Also, authors reported increased plasma levels of malondialdehyde and protein carbonyl groups in FD patients, as a consequence of higher lipid peroxidation and protein damage, compared to controls. However, the underlined molecular mechanisms that lead to cell and tissue damage in FD vasculopathy can be only partially explained by Gb3 accumulation, as demonstrating by lack of ERT responsiveness in FD patients despite Gb3 removal.

In this study, we investigated the impact of ADME gene variants on treatment failure in a cohort of 37 FD patients under ERT. We found three SNPs in ADH4 gene (rs1126670, rs1126671, rs2032349) and one in ADH5 gene (rs2602836) associated with disease progression. Both genes belong to the human alcohol dehydrogenase (ADH) family clustered on chromosome 4q22-23 [21]. Active ADH enzyme is formed by a dimerization interaction between two of nine possible different subunits, each encoded by a unique gene. The ADH4 gene encodes the human π subunit and contributes to the metabolization of a wide variety of substrates, including ethanol, retinol, other aliphatic alcohols, hydroxysteroids, and lipid peroxidation products. This gene is expressed primarily in the liver and at lower levels in the gastrointestinal tract and spleen. The ADH5 gene encodes the χ subunit and is involved in the metabolism of alcohols and aldehydes [22]. Unlike other members of the ADH family, ADH5 is ubiquitously expressed. The ADH4 rs1126671 at exon 7 results in the amino acid substitutions Val-Ile and might affects the function of the π subunit. The rs1126670 at exon 6 and the rs2032349 at exon 3 are synonymous changes, respectively of Pro-Pro and Ser-Ser. The rs2602836 in ADH5 gene is located at intergenic level and could be important for gene expression level. In previous study, ADH variants have been implicated in the risk for alcohol and drug dependence [23], schizophrenia and autism [24], cancer [25, 26]. ADH genes are also involved in the metabolism of 4-hydroxynonenal (4-HNE) to produce alcohol 1,4-dihydroxy-2-nonene (DHN). 4-HNE is an aldehyde which can be formed as secondary product during lipid peroxidation and its levels increase significantly in plasma and tissues in disease associated with oxidative stress, such as atherosclerosis and diabetes, and neurological disorders [27]. Studies have found abundance of 4-HNE in the vascular endothelial and smooth muscle cells. Levels of 4-HNE in vasculature are not only dependent on the rate of lipid peroxidation and 4-HNE synthesis, but also on the removal of 4-HNE adducts by phase II metabolic pathways. Because at high level 4-HNE can react with protein and DNA to form adducts, with consequent toxicity, it is evident that mutations and/or functional SNPs in genes involved in 4-HNE metabolism, such as ADH genes, could reduce the rapid intracellular metabolism of this compound and could be crucial for cell survival in a compromised oxidative stress system. ADH4 is highly active in the reduction of 4-HNE, supporting a defense role for cells [28].

We suggest that SNPs in ADH4/ADH5 genes, observed in this study, could be considered a risk factor, linked to oxidative stress state, for disease progression in FD patients despite enzyme replacement therapy. However, for the absence of functional analysis and the small size of population our study should be considered a hypothesis generating study. Validation of our results has been planned in a larger and independent cohort to evaluate the correlation between 4-HNE plasmatic levels, ADH4/ADH5 genotypes and MSSI score index. In conclusion, our results provide a basic tool and framework in the light of personalized medicine for FD.

From January 2004 to May 2014, 37 patients with a clinical and molecular diagnosis of FD have been regularly monitored at the Pediatric Unit of Magna Graecia University of Catanzaro and at the Department of Nephrology of Federico II University of Naples. Of these, 33 patients received infusions of agalsidase alfa 0.2 mg/kg every other week, the remaining 4 were treated with agalsidase beta every 2 weeks at a dose of 1 mg/ kg. ERT with algasidase alfa was initiated 1–6 years (median:2.3) after diagnosis (median age 35.7 years, range 15–62 years), while ERT with algasidase beta 1–4 years (median: 3.2 years) after diagnosis (median age 41.7 years, range 25–57 years).

Clinical characteristics of patients are summarized in Table 2. Study protocols were approved by institutional ethics committee and written informed consent was obtained from all participants.

The characteristics of 37 patients with a clinical and molecular diagnosis of FD enrolled in the study are indicated. Patients have been monitored regularly at the Pediatric Unit of Magna Graecia University of Catanzaro and at the Department of Nephrology of Federico II University of Naples and received ERT with algasidase alfa or beta.

Disease progression and treatment effects in individual patients were assessed longitudinally as changes from baseline using MSSI [29]. The MSSI scoring system consists of four sections that include general, neurological, cardiovascular and renal signs and symptoms [30]. For each component, a single rating was assigned, and the corresponding points were summed to produce a total score. Individual scores were then combined to calculate the total score MSSI. MSSI was evaluated as mild for values between 0–20, moderate for values between 20–40, and severe for values higher than 40. Baseline MSSI values were obtained before treatment, follow up values after at least 1 year of ERT. Patients were classified as non-responders if MSSI values changes from mild (at baseline) to moderate or from moderate to severe.

All genotypes of interest were validated using pre-designed TaqMan SNP genotyping assays (Assay ID: C_519458_40, C_11941799_30, C_11941805_40 and C_9523470_10, Applied Biosystem). PCR amplification and endpoint plate read were carried out on a ViiA7TM Real-Time PCR System (Applied Biosystem). All reactions were performed in duplicate in a final volume of 10 μL accordingly to the manufacturer’s recommendations. Mismatched genotypes, which constituted < 0.5% of the total number of duplicate genotypes performed, were discarded.